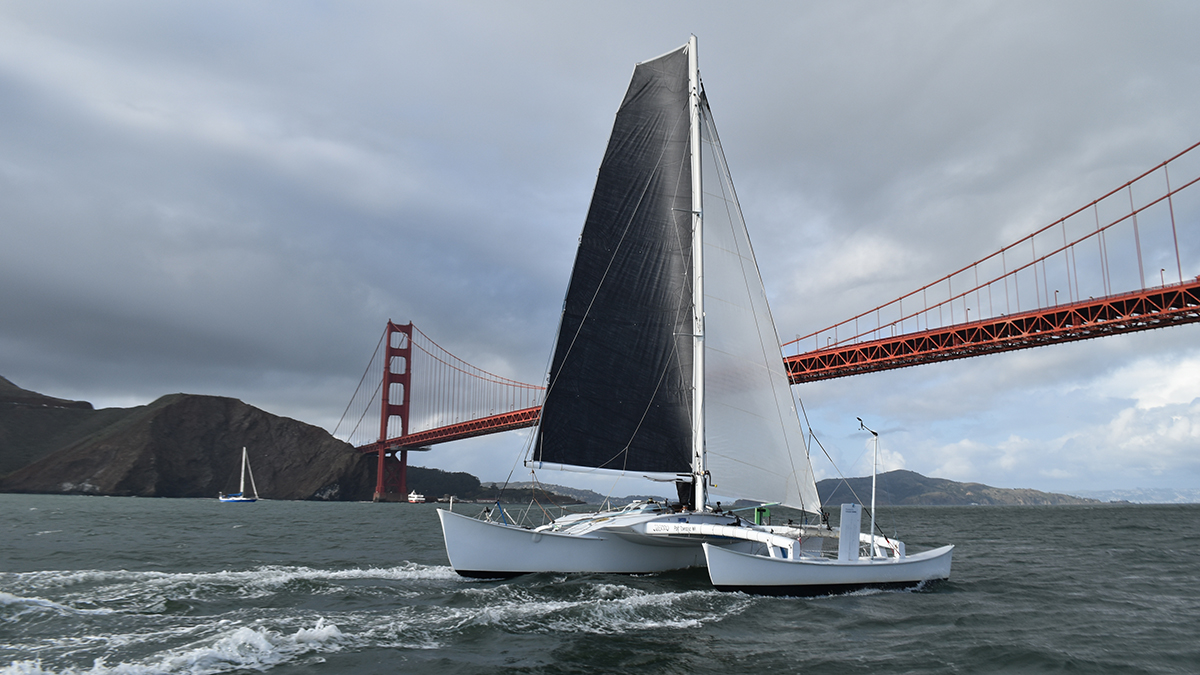 American solo sailor Ryan Finn has become the first to sail around Cape Horn in a proa.

American sailor Ryan Finn has become the first yachtsman ever to sail around Cape Horn in a proa.

Finn completed his New York to San Francisco solo record attempt on his 36ft proa Jzerro on April 21, after 93 days at sea.

Finn set off from Brooklyn, New York in mid January, attempting to set a new record over the historic 13,000-mile course which follows the great California Gold Rush of the 1840s and 1850s from the eastern seaboard to the western United States. 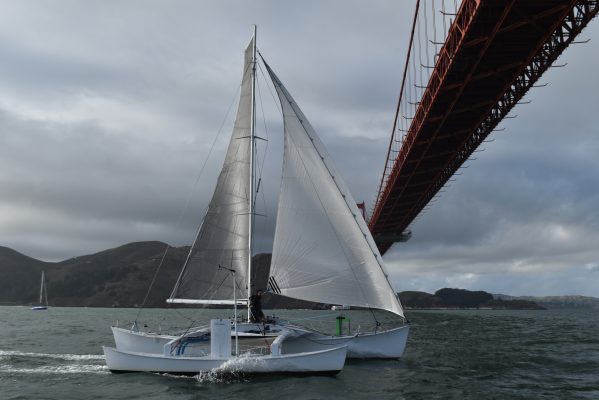 Over 200 record attempts have been made over the route, in everything from ocean trimarans to maxis, but it has proved particularly difficult to beat. The clipper ship Flying Cloud set a record time of 89 days 8 hours in 1854, which stood  for a remarkable 135 years.

The course record had never previously been attempted in a proa. Finn’s proa is also the smallest yacht ever to attempt the route sailed single-handed.

Finn’s Russel Brown designed proa is exceptionally light (at 3,200 lbs or 1,450 kgs), designed for fast off wind sailing in the Pacific islands. To sail it single-handed, against the prevailing winds and into challenging head seas around Cape Horn, is a remarkable feat of seamanship. 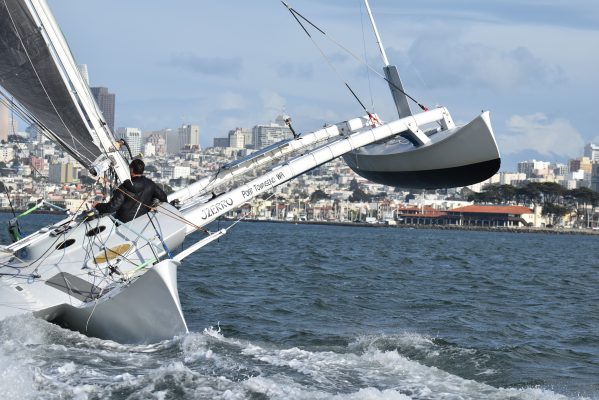 Finn’s first attempt in 2021 ended after the boat suffered structural damage due to being overloaded with the weight of gear and provisions needed for the voyage. For his second attempt he added a watermaker, enabling Jzerro to sail far less loaded.

For his second attempt, Finn sailed more than 14,000 miles – through Bermuda, past Brazil, and around the fearsome Cape Horn, before passing the Clipperton Islands on his way up to San Francisco.

Damage forced him to stop for repairs in Brazil and Patagonia, meaning his voyage was not non-stop (the single-handed non-stop record currently stands at 81 days) but his arrival in San Francisco is a huge achievement nonetheless.

Blog posts on his facebook page ‘2Oceans1Rock’ detail the extremity of the challenge.

On 18 March, off southern Chile, he wrote: “I’m scared. What lies ahead is frightening and I’m not looking forward to it.

“The race to get north, well ahead of the second depression is on and honestly at the top of my list of things I fear today is getting becalmed tonight. I’ve been becalmed almost every 24 hour period since getting south of Brazil.

“Normally that would be frustrating, but in this case it’s dangerous. I have a narrow window and I don’t need to be sloshed around in a windless hole for hours, as I was last night and the night before.

“It’s supremely frustrating and in this case terrifying.” 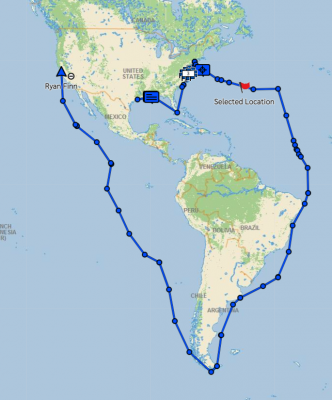 Two days earlier he had rounded Cape Horn, posting: “I sailed past Cape Horn in the early AM hours today. All I could see were the two lighthouses.

“It’s been very tricky getting this far. The rain has only stopped intermittently this morning and I’m still getting overrun by showers with 18 knots of wind, followed by 5. This is slow and kind of miserable.

“It promises to be as hard or harder for at least the next three days. I’m already tired. However, I have to remind myself that this is a privilege and I feel blessed to be where I am.
“I’d like to think that I’m sneaking out of here, but for sure the great Cape is watching my progress. You can feel it down here.” 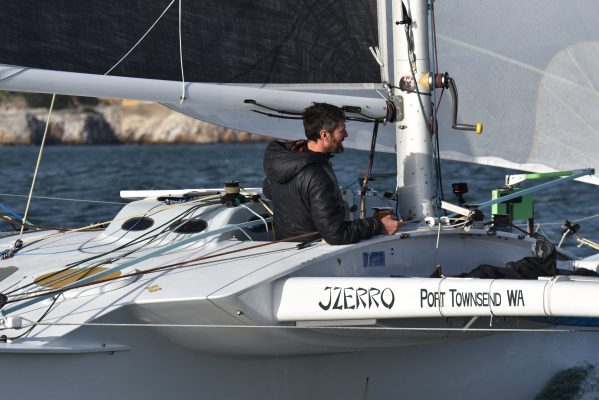 Ryan Finn is the first sailor to round Cape Horn in a proa Photo: Merfyn Owen

Renowned yacht designer Merfyn Owen, a friend of Finn’s, greeted him into San Francisco. Owen commented: “My old mate Ryan Finn sailed into San Francisco Bay this evening completing what I hope will be recognised as one of the greatest feats of seamanship ever completed by an American sailor. New York City to San Francisco, solo, in 93 days, on a 36′ proa! He looks like he’s just been out for the weekend.

“A more modest sailor you will not meet. He must know, but you couldn’t tell from his demeanour if he knew what he’d just pulled off. I’m in awe.”