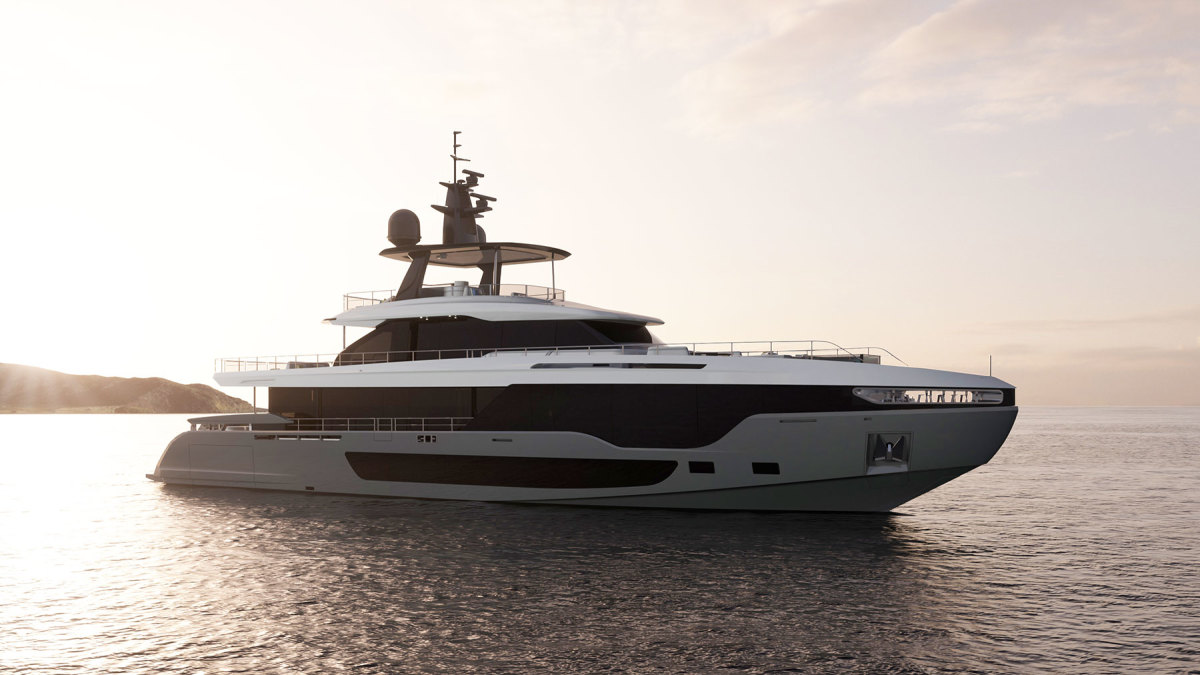 Azimut made a double debut with the launch of the Grande 26M ( 85ft) and Grande 36M (118ft), two examples of yacht layout design with innovative solutions that open up new onboard spaces and horizons. The Grande 26M features a Sea View Terrace on an extended cockpit, while the Grande 36M introduces the first ever upper deck semi-walkaround, which extends over a single level almost to the tip of the bow. With original solutions designed to foster a sense of freedom and proximity to the sea, these two yacht models will be officially presented to the wider public at the Cannes Yachting Festival later this year.

The philosophy behind the Azimut Grande collection is to evoke a feeling of being completely immersed in nature. Azimut achieved this by removing any impediments or barriers, with its signature full-length windows. The arrival of the Grande 26M and Grande 36M signals an increasingly ambitious direction with a focus on redefining spaces through versatility, design ingenuity and technological insight.

The Grande 26M has a fold-up Sea View Terrace, created by opening up the stern hatch so that it becomes a natural extension of the cockpit. Inspired by that of the larger Trideck, it transforms the cockpit into a terrace on the sea. With its convertible furniture, it can be instantly changed into an al fresco living area, offering the owner and guests a relaxing spot to soak up the sun during the day or it can be an open-air dining zone with a walkaround table for access on all four sides and unimpeded sea views.

The layout of the Grande 26M benefits from an original approach to how the different levels are utilized, creating solutions that deliver enhanced comfort and total privacy when desired.

The interior features an owner’s suite with Alberto Mancini’s floor-to-ceiling windows on the main deck and four guest cabins below. Crew quarters are located in the bow with direct access to the galley and side walkway, a separate thoroughfare made possible by the partially-raised wheelhouse.

With the Grande 36M, Azimut introduces a new upper deck semi-walkaround which runs on a single level from the stern almost to the very tip of the bow. The Grande 36M conjures up space that previously never existed, transforming the layout to deliver a spacious environment that can be enjoyed from morning to midnight. For the first time, the upper deck becomes a physical place that takes in the entire length of the yacht. The skylounge sits at the center, with oversize slide-away glass doors opening up to allow the interior to seamlessly merge into the exterior with its all-glass hot tub and fully-equipped sundeck. The avantgarde design philosophy centers around offering layout solutions tailored to an individual owner’s lifestyle. For instance, the salon and the skylounge can be fitted out in a variety of ways, from traditional to more innovative, including an informal indoor-outdoor dining zone.

The Grande 26M and Grande 36M combine innovation with an ethical approach that reflects Azimut’s drive for a more sustainable future, outlined in its Green Efficiency Program, which was introduced in 2015 with the aim of decreasing environmental impact.

Both new models benefit from extensive use of carbon fiber and vinylester resin, which together reduce the superstructure weight by 30%, thus optimizing engine power which in turn reduces fuel usage.

The Grande 26M is powered by a new Pod drive system which, together with the lighter structure, lowers fuel consumption by 20% in comparison with traditional boats of similar dimensions, while the Grande 36M boasts the latest evolution of the D2P® (Displacement to Planing) hull. Designed by Pierluigi Ausonio of Studio P.L.A.N.A. and the Azimut|Benetti R&D department, it has already demonstrated its effectiveness on the Grande Trideck. The D2P® hull’s finetuned wave piercer delivers optimized fuel usage levels, with peaks in efficiency of up to 40% at displacement speed, compared to traditional hard chine hulls.