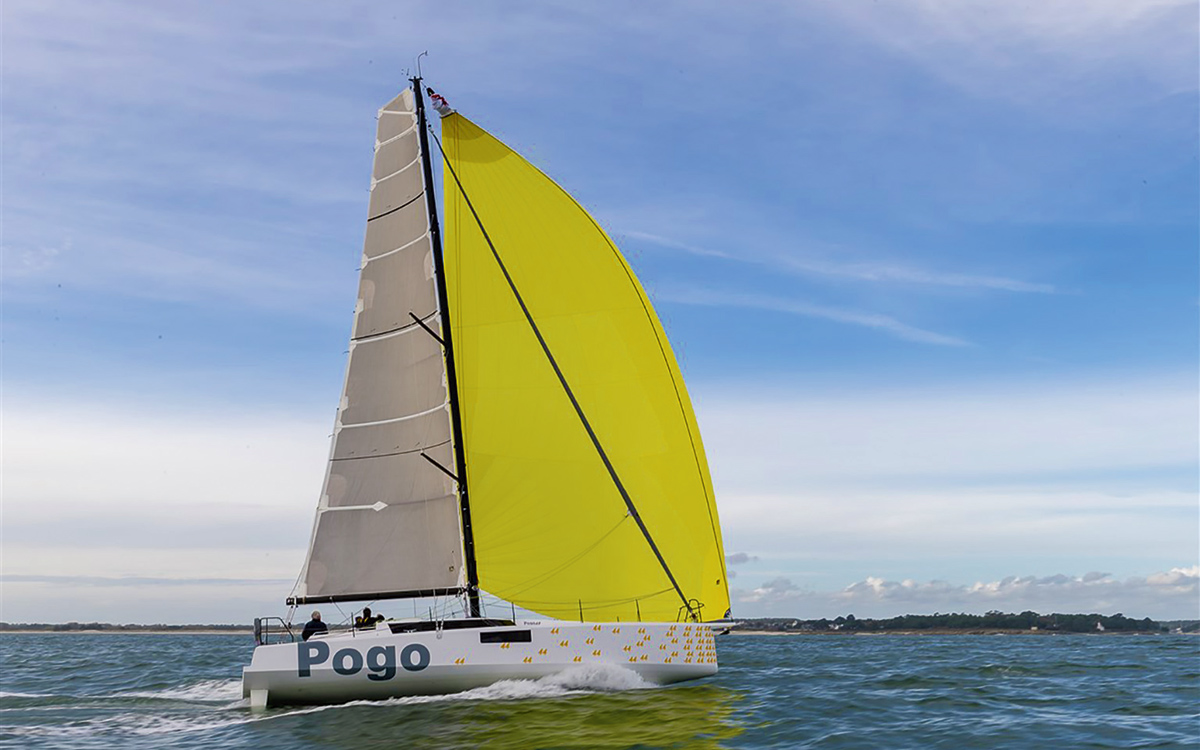 What are the top new designs to look out for in 2021? We preview some of the most exciting gear and yacht launches

Our extraordinary 2020 finished with no METS equipment show – where the annual DAME awards take place – and the unsurprising announcement that the world’s largest indoor boat show in Düsseldorf was postponed until April. But the lack of trade shows didn’t mean a lack of awards for impressive kit and DAME winners were still duly selected. 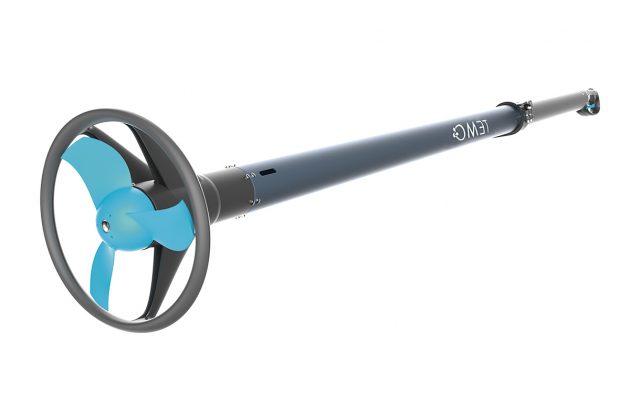 Sometimes when you see new products, however clever, you wonder what problem they were designed to solve. Not so with the TEMO. The DAME jury was unanimous in voting this new electric outboard engine product the outright winner.

The French company behind this well thought-out, cleverly designed product has come up with an ingenious solution-based idea.

It is also great to see that small, start-up companies are still able to invent new ideas and bring them to market, even in such a difficult year. During the height of the pandemic, the company managed to raise €600,000 to bring this to market, continued their R&D over the summer and, since actively marketing the TEMO this autumn, has sold over 300 units.

The TEMO is perhaps best likened to an electric sculling oar, or a mini version of the longtail boat engines in Thailand. It is part oar, part electric outboard and it’s so ingenious that when you first see it, you wonder why it hasn’t been done before.

The 1.7m long oar contains a 450W electric motor and built-in rechargeable battery. TEMO says that it can run at full speed for 45 minutes. The 17cm propeller sits within a circular guard and the power controls for forward and reverse are within a nicely designed handle.

The TEMO comes with a rowlock fitting kit for the transom of a tender, and has a kill cord on a strap that attaches magnetically.

It’s lightweight, at only 4.9kg, and at a price of €1,450 is both lighter and less expensive than the smallest Torqeedo outboard (though lower in power and range) making it most suitable for short journeys to a boat on a mooring in protected waters.

TEMO says the oar should have a life of over 1,000 charge cycles. Creditably, it says the company is also ‘currently working on a responsible and efficient recycling loop to receive all our motors at the end of their life.’

Props to the TEMO team, too, for designing a digital platform for their product with direct sales in mind. The company website in French and English is excellent and you can go online, add one to the cart and check out.

Buy it now from Temo France.

Note: With each product is a ‘Buy it now’ link. If you click on this then we may receive a small amount of money from the retailer when you purchase the item. This doesn’t affect the amount you pay. 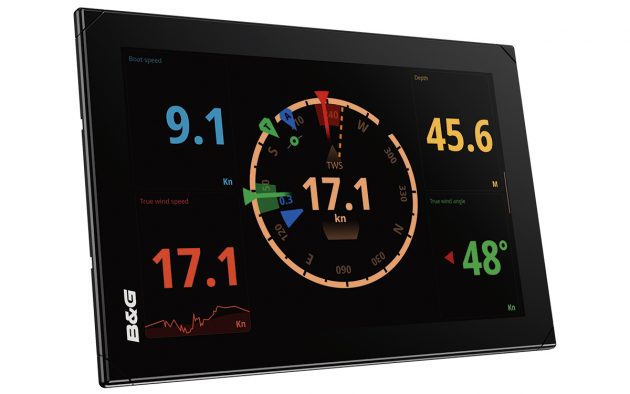 Falling solidly into the ‘want one’ category is the B&G Nemesis sailing system. This high-end sailing data display has a multitude of features and screen customisations that lie a world away from the clunky drop-down menus of yore. Apple integration? Check. Touchscreen? Check. Landscape and portrait mode? Check.

The software behind it is an Android-based product that Navico has designed to be intuitive to use in the marine environment. It can be fully integrated with the B&G Network to show options including depth, heading and wind information as well as alarms, MOB, tanks, and race info such as laylines. You can also overlay a camera feed.

The 9- or 12in display can be completely customised to show you whatever instrument data you want in whatever colour palette you like.

Buy it now from B&G. 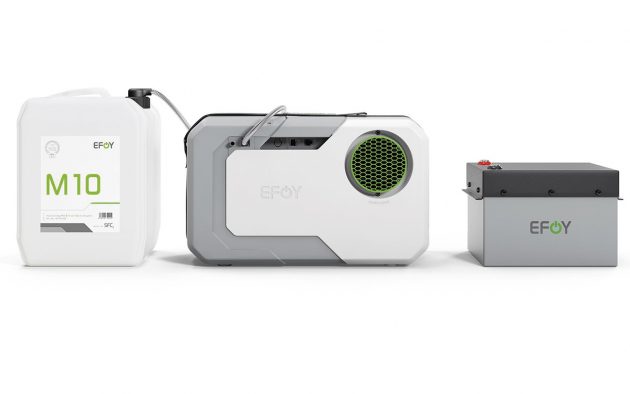 Hybrid power is a hot topic, and the DAME jury really liked this versatile set-up from EFOY. It uses a fuel cell to generate power, which automatically recharges an EFOY lithium battery. The EFOY 150 and 80 fuel cells would be great packages for small boats, day boats or others that don’t have their own in-built power systems.

EFOY’s technology is well-tried and has been in use in small racing yachts for over a decade. The chief advantage here is low weight, but other benefits to be weighed against the cost is that they are clean – the only byproduct is water – silent and virtually maintenance free. They produce less waste and need less fuel per amp than a traditional petrol or diesel generator.

The fuel cell runs on methanol, which comes in plastic jerrycan containers. It has an integrated controller to monitor charge level and recharges when necessary.

The two fuel cells went on sale in November 2020 but the EFOY lithium battery doesn’t follow until January 2021 – prices yet to be confirmed.

Buy it now from EFOY. 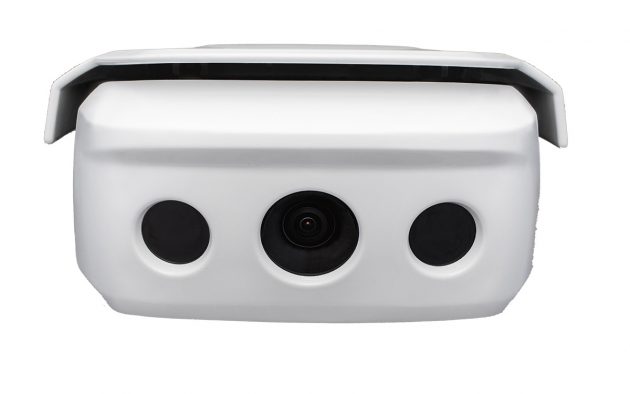 The technology employed by the OSCAR anti-collision system is well-developed and being used on 18 of the 33 IMOCA 60s in the Vendée Globe as well as the Ultime trimarans. As we reported in the January 2021 issue, OSCAR One 320, made by Breton-based company BSB Marine represents a trickledown version of this.

Billed as ‘the first affordable collision avoidance system’ it uses AI-based image recognition algorithms to look for, analyse and detect collision threats. The RGB and thermal cameras it uses, as well as the processor, are all in one unit – hence ‘One’ – and it can be connected to existing MFDs or run on a smartphone. It’s claimed to be able to be able to spot a small fishing vessel at 1,000m, a RIB at 500m and a lobster pot at 100m.

While the DAME jury really liked this technology there are still questions as to how successful it is in moderate to rough seas. As you might expect, skippers in the Vendée Globe say it ‘struggles’ in big seas, admits project manager Solenn Gouerou.

A question mark also sits over how effective it could be at detecting semi-submerged objects. Race favourites Jérémie Beyou, Alex Thomson, Sébastien Simon and Sam Davies all hit ‘UFOs’ that caused serious damage. Yet teams also say that it has detected other small objects. What we really need in future is a system that can combine visual information with data from forward-looking sonar – we know that human watchkeepers miss things and are distractible, so this is exciting technology that’s likely to change how we keep watch.

Buy it now from oscar-navigation 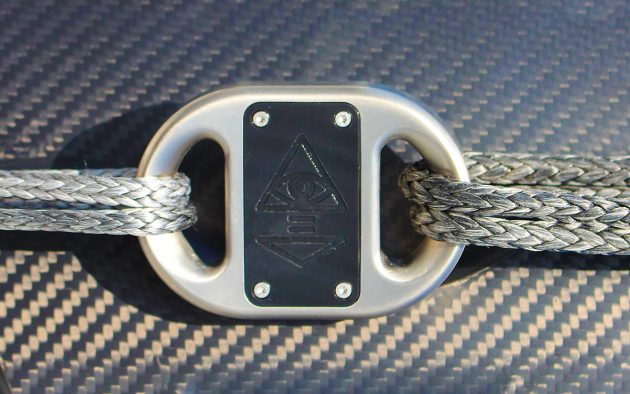 Pushing to the max yet avoiding serious gear failure is important and getting more so with every speed increase, especially on foiling or foil-equipped yachts that see high dynamic loads.

The Smartlink is a wireless real-time load sensor of the type being used by America’s Cup, Olympic and IMOCA teams, and it is now available in five sizes.

It can be attached to any soft line or rope to monitor maximum working loads on bobstays, Code sail furlers, backstays and vangs or halyards. The information is relayed via Bluetooth over a 15m range to an Android or iPhone app, and the logging feature can combine with GPS for full post-race analysis.

Buy it now from Cyclops Marine. 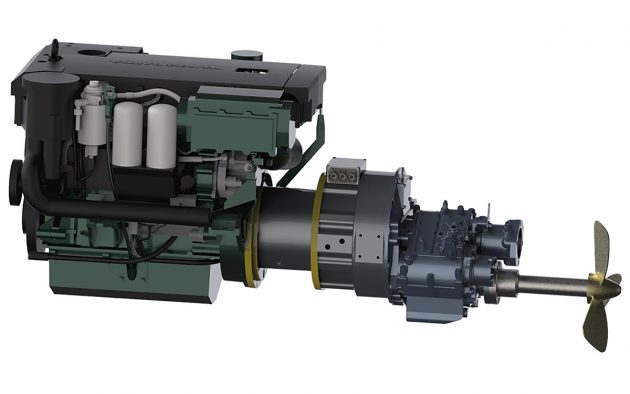 Another possibility for hydro generation is the HP In-Line. This is a permanent magnet generator built into the drivetrain, which can generate power to charge the batteries and
be used with standard shaft propulsion and almost any kind of engine and gearbox.

The permanent magnet engine sits directly in line with the combustion engine and gearbox and can either drive the propeller shaft directly when the main engine is switched off or act as a generator when sailing with the diesel engine switched on.

Hydro generation technology is quite advanced and has been adopted on some superyachts, although overheating has occasionally been found to be a problem. Here, the smallest model is 48V DC model, which is the sweet spot for a lot of yachts and a practical voltage. 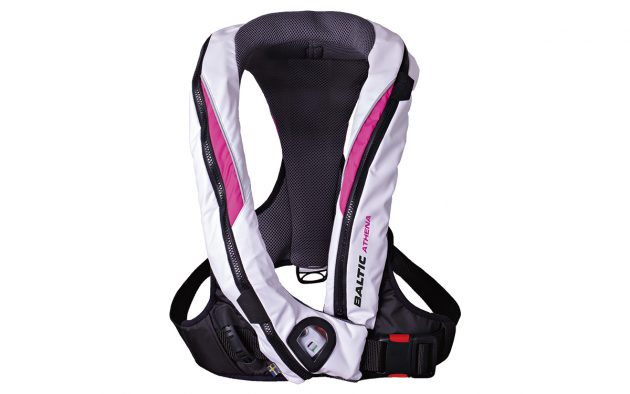 There is nothing earth-shattering about Baltic’s Athena lifejacket for women; the question is: why has it taken a manufacturer so long? It is no revelation that women are built differently in the chest region, so hats off to Baltic for finally designing one that isn’t merely a ‘pink and shrink’ version but a specific, comfortable design.

Among the alterations, the cover has been extended so that the canister valve can be moved below the bust. At €200, however, it’s disappointing that it doesn’t come with offshore must-haves such as a sprayhood and light.

Buy it now from CHMarine. 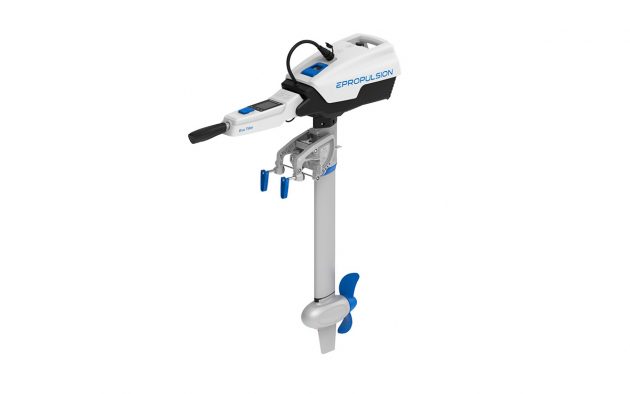 Hydro generation is a big area of development and it is good to see ePropulsion come up with the first ever recharging outboard engine. The Spirit 1.0 EVO is equivalent to a 3hp outboard with the big difference that it can charge while sailing. It starts at around 4-5 knots, producing 50W, rising to 200W at 8 knots and 330W at 10 knots. This makes it a perfect, comparatively light weight option for daysailers and small boats. It has decent run-time, too: the Spirit battery is 1,276 watt-hours.

Also noteworthy is the Evo allows solar charging up to 180W.

Buy it now from E-Propulsion. 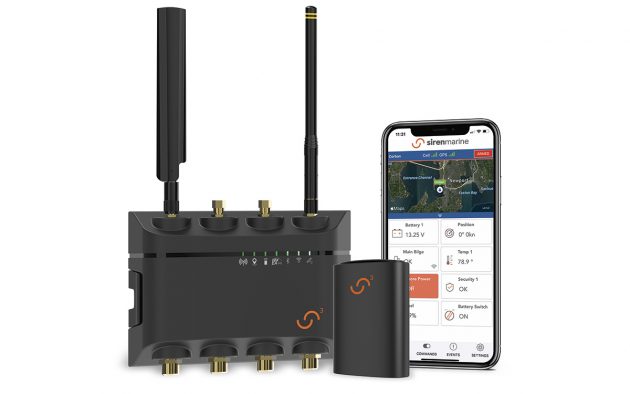 Of the growing number of remote monitoring systems, the Siren 3 Pro seems one of the most interesting and advanced. This NMEA 2000 system combines digital switching and satellite tracking and uses mobile networks and a cloud-based platform to work with a smartphone app.

It can monitor battery voltage, engine info, bilge alarms, relay position information and send geofence and other alerts to a smartphone, plus digital switching allows users to turn on cabin lights or switch on aircon from their phone. The system also integrates with Alexa.

Buy it now from Siren Marine. 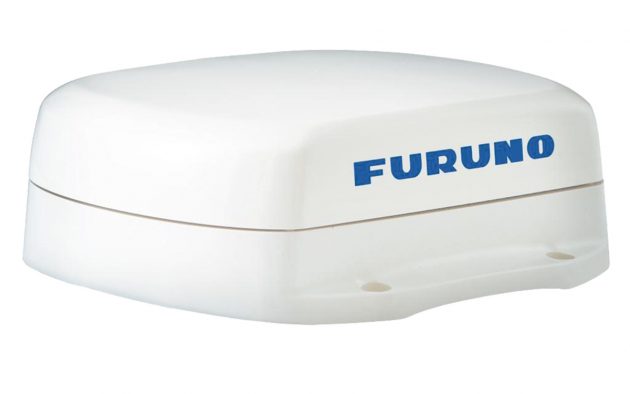 On the face of it, this high accuracy GPS doesn’t seem like the most radical product. But don’t be fooled: beneath the hood, there is some really revolutionary technology providing super-accurate positioning to sharpen radar and enable next generation autopilot performance.

The satellite compass is about the size of a hardback book and unobtrusive to flush-mount or fit on a pedestal. It contains four antennas to produce six baselines rather than the maximum of three used previously and uses the US, European and Russian satellite systems.

Satellite compasses have been notoriously difficult to locate on board as the signals bounce off things, and using six signals gets around that. The amount of super high accuracy data will give autopilots much more precise and immediate information to allow corrections for pitch, yaw and roll.

Buy it now from Furuno. 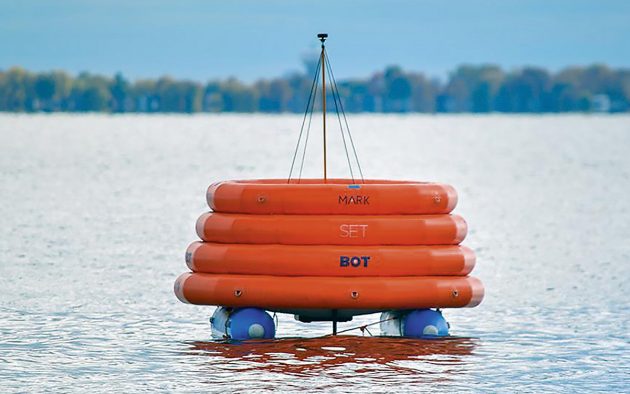 Race OS is a fully autonomous system that enables races to be run without a single race officer on the water. MarkSetBot founder Kevin Morin actually ran the first fully automated regatta in October.

RaceOS has robotic platforms that go to a GPS position, stay on station and can start and record a race. The mark at the weather side of the course reports wind data back to the RaceOS, while another on the right side of the starting line is responsible for controlling the course, and can adjust it if there is a big wind shift. Horn signals warn competitors of course changes and when anyone is OCS, followed by smartphone or smartwatch notification.