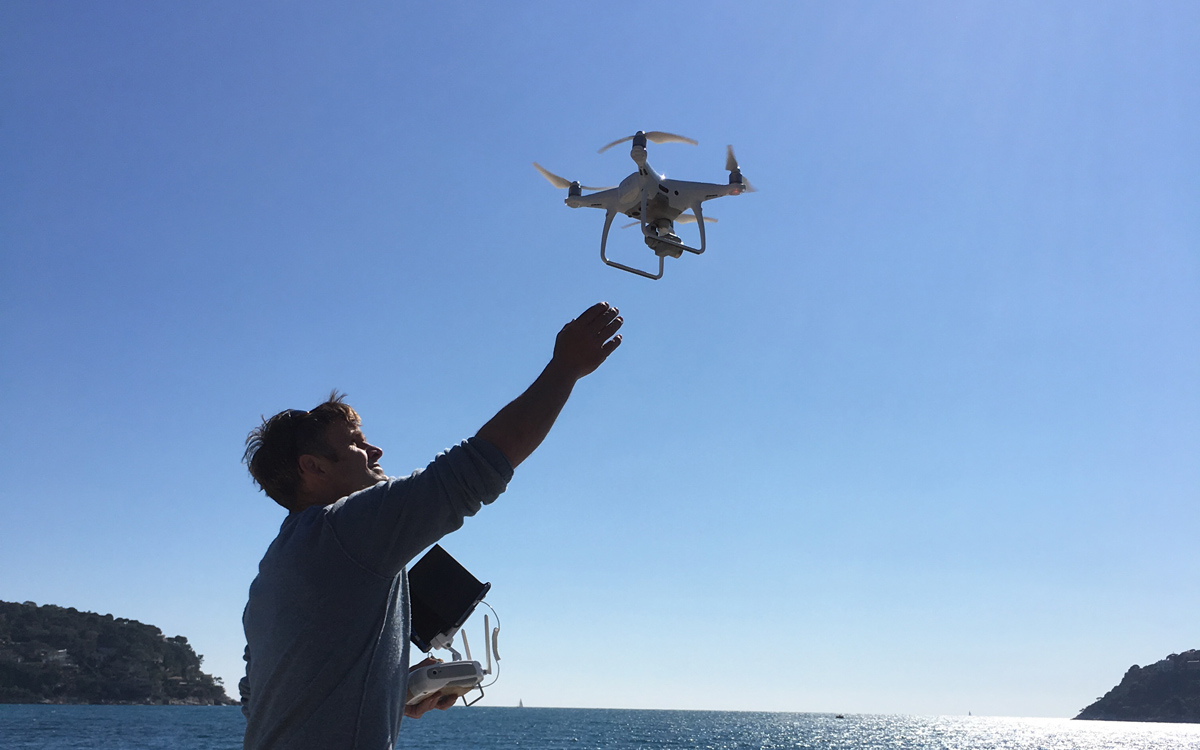 We pick out 8 of the best drones for sailing, from budget-friendly options right the way through to advanced 4K models, by Phil Sampson

Drones are now must-have items for many cruising sailors. Sailing Instagram feeds and YouTube vlogs are full of stunning overhead anchorage shots – and, for the brave, footage taken underway.

Meanwhile professional photographers at events like the 52 Super Series and the last Volvo Ocean Race continually race the bar in terms of demonstrating what’s possible when you combine drone shots with amazing yachts.  So, if you’re considering a new drone for sailing, what should you look for?

It’s no understatement to say that drones have changed how we capture moving images in a more dramatic way than any other product since the video camera was invented more than 100 years ago.

Why? Because at a stroke a drone removes the limitations of fixed, or largely fixed, viewpoints by giving its operator the freedom of the skies from which to film. Well, almost…

The caveat here is that anyone wishing to pilot a drone must first register and take a theory test to gain a Flyer ID for themselves, and then apply for an Operator ID for their drone. It’s all set down in the Civil Aviation Authority’s Drone Code.

The Drone Code also covers topics such as safety, where you can and cannot fly, and privacy protection. As such, it is the bible for new drone pilots.

Once the registration and ID hurdles have been overcome, you need to decide what are you looking to achieve with a drone, and what sort of drone do you need to capture the shots you want?

We’ve all seen the awe-inspiring images produced by drone-mounted cameras soaring over ridges, speeding through gullies, circling 360-degrees around moving vehicles and so on.

These will have been shot by skilled professionals using top-spec equipment and, while it’s eminently possible for the rest of us to create spectacular drone footage, do be aware that any successful shoot will demand considerable planning and preparation beforehand and editing skills afterwards.

And if you’re looking to film from a boat, you may also want to ask questions about landing the drone safely back onboard after a flight…

In terms of equipment, suitable drones for sailing fall into a number of categories – which for our purposes we’ve summed up as budget, intermediate and advanced: 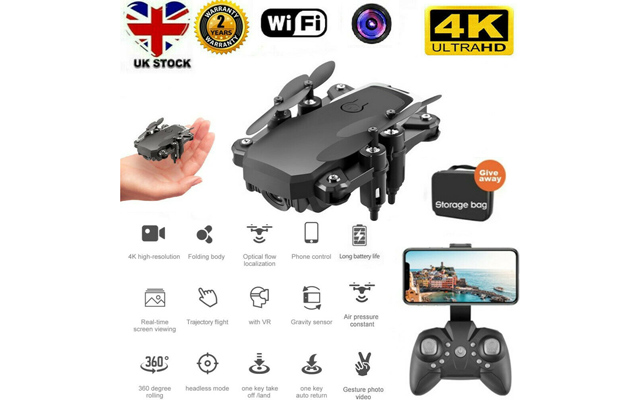 Typical of the mass of entry-level drones available on eBay is the Drone X Pro, a three-speed foldable drone which gives around 10 minutes of flying time for a 100-minute charge.

Its control distance is limited to approximately 150 metres, which although it doesn’t sound much is the equivalent to the length of one-and-a-half football pitches. The Drone X Pro shoots in 4K ultra high definition and boasts a range of features including 360-degree rolling, one key take-off and landing, and one key Auto Return.

Smartphones clip onto the drone’s handset to provide a straightforward controller with real-time screen viewing.

Reasons to buy: 4K for a budget price, can view feed with phone 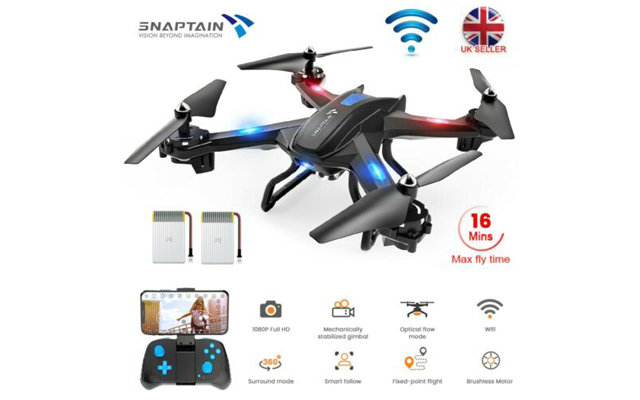 We’re hoping this drone’s name is not an amalgamation of ‘snap’ and ‘captain’, and on the presumption it won’t make boaters lose their cool we’ve added it to our best drones for sailing list because the Snaptain GPS delivers a host of features at a budget price.

Included in the spec are a wide angle 1080P HD camera, a mechanically stabilised gimbal and voice control, which works by speaking command words (eg: forward, back) into your connected smartphone.

GPS enables functions such as Follow Me and Auto Return and there’s an Optical Flow mode to help keep the drone’s lateral and forward movement stable relative to what’s below it. As such, Optical Flow provides a useful stability tool should the GPS signal be lost.

Reasons to buy: Wide angle camera. GPS features such as Following and return 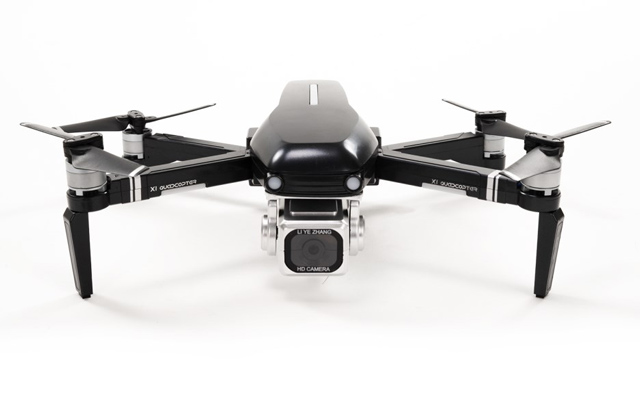 Moving up a level we come to the Proflight X18. Providing up to 25 minutes of fly time, this drone has a 4K UHD camera, so the footage it delivers should be super-clear.

There are also controls for camera zoom and tilt, plus a gesture mode which allows the user to control the drone by way of hand and arm movements aimed at their smartphone app, which dutifully relays the commands to the drone.

The Proflight X18 has a range of 1,000 metres, although its WiFi is limited to around 600 metres. An extra bonus is that this drone is supplied with a spare set of propellors.

Reasons to avoid: WiFi is limited to around 600 metres, still only 25 minute fly time

Buy it now on LaptopsDirect.co.uk 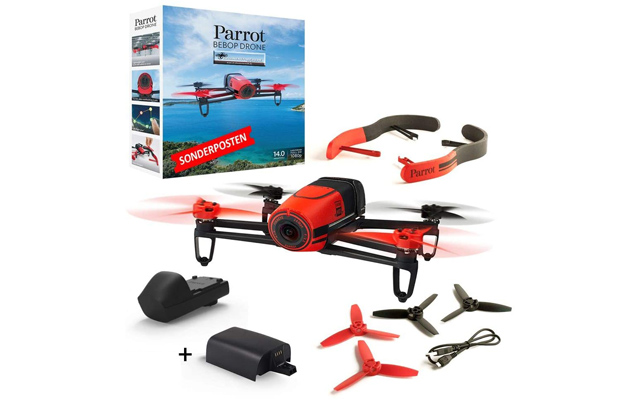 Simplicity in motion sums up the funkily named Parrot Bebop as this drone features an intelligent flight system which automatically keeps the Parrot aloft and under the user’s control at all times by way of its associated app.

The integrated onboard camera takes 14 mega pixel 180-degree fish eye photos and shoots 1080p high definition video, which can be monitored from the ground by way of a live feed direct to the pilot’s phone.

The Parrot Bebop can manage up to 12 minutes on a single charge, so investing in a spare battery might well be an option to consider here. 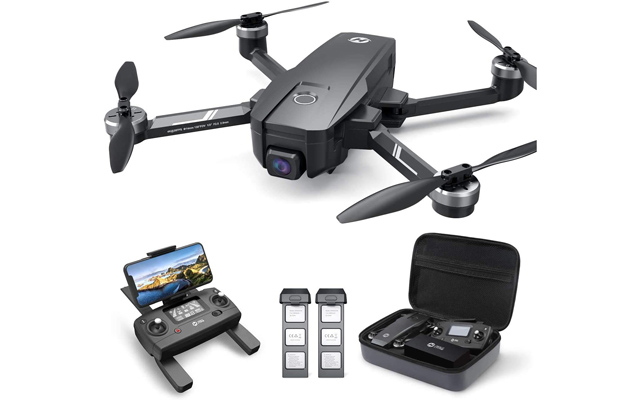 One of the key advantages of the Holy Stone HS720E is that it’s supplied with two intelligent batteries. Each of these provides up to 23 minutes of flight time, meaning more time in the air and less charging.

The unit’s brushless motors are powerful and quiet in operation and have been designed to make flying smooth, stable and fast. Air optical flow and air pressure altitude controls are both included, meaning the drone can hover stably.

The integral GPS system locks onto the position of the drone before take-off, which in turn enables the auto-return to home function, thereby minimising the chances of the drone being lost.

Reasons to buy: Features two intelligent batteries for up to 46 minutes flight time, quiet in operation, shoots in 4K 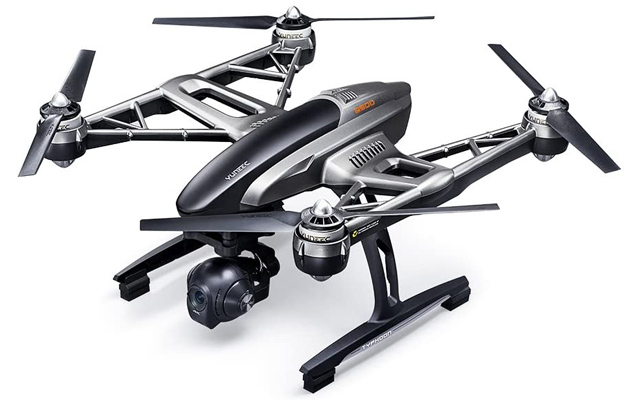 Raising the bar another notch is the Yuneec Typhoon Q500, our choice for a sub-£1,000 advanced drone for sailing. Inside the box is the aircraft itself, its 4K UHD 30 frames per second camera, Yuneec’s ST10+ FPV (First Person View) ground station, a Yuneec SteadyGrip, a Lithium Polymer battery and a range of accessories.

One of the many advantages of the Yuneec Typhoon Q500 is that its ST10+ ground station has an integrated 5.5″ LCD viewing screen, meaning that no other equipment (e.g. smartphone) is required for flight.

The system comes with a range of features and modes, including Follow Me and Watch Me (where the camera remains pointed at the pilot) and Dynamic Return Home, which automatically lands the drone within 4-8 metres of the ground station.

Reasons to avoid: Middle ground price between budget and high end drones but lacking the features of the high end market 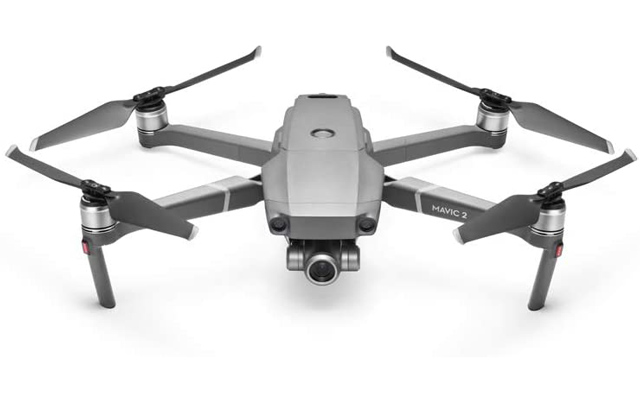 DJI is the undisputed favourite brand for sailors choosing a drone. The DJI Mavic 2 Zoom featured here is classed as a professional level piece of kit and offers high resolution still images and video shot through a 24-48 mm optical zoom lens, with a further x2 magnification available digitally.

Fast, accurate focus is another stand out feature of this drone and its Dolly Zoom mode automatically adjusts focus when flying to provide what DJI describe as an intense warping visual effect. 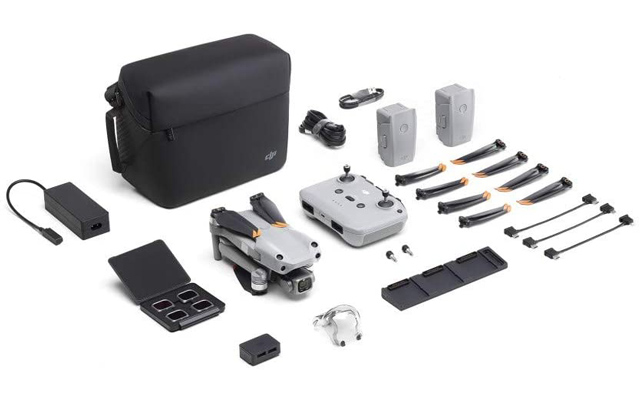 As the name on the box infers, this DJI offering is an all-in-one product intended to dispel any fear of flying and freeing its owner to concentrate on making great movies – the bundle even includes a service plan covering various types of common drone damage.

Anyone still worried about the risks can comfort themselves with the fact that the DJI Air 2S also has AirSense, a flight location system which provides audio and visual alerts of other aircraft in the vicinity through the DJI Fly app.

Two video options of 4K and an even higher resolution of 5.4K come as part of the package, which also features a 5.5″ smart controller with its own 1080p HD display.

Other items supplied in the combo are three intelligent flight batteries, a charging hub, a set of neutral density filters to aid shooting in bright conditions, and a shoulder bag.