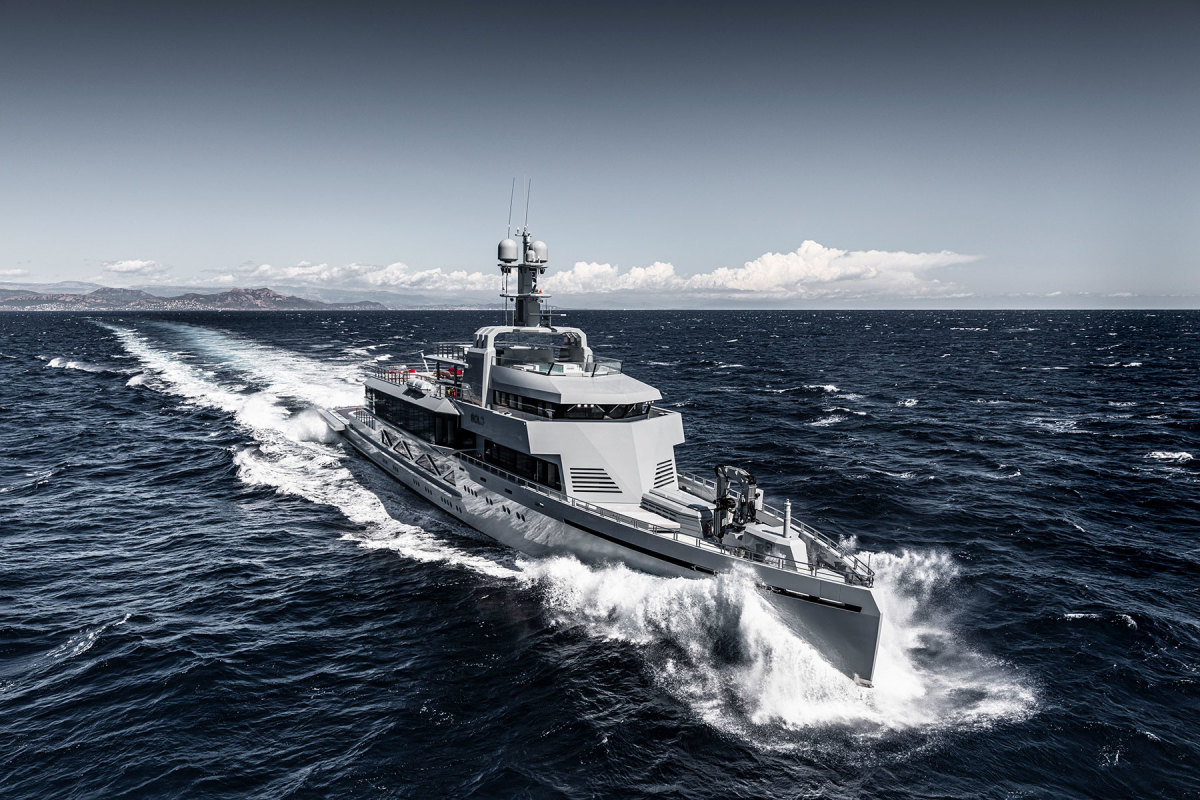 Guido Krass, owner of the Australian shipyard SilverYachts, aptly named his 280-foot (85-meter) sport activity vessel Bold. The yacht manifests a masculine, military-style profile that is angular, geometric and edgy. She is all aluminum and painted a cool anthracite gray, and is lightweight, fast and fuel-efficient. Inside, she looks like an urban loft: modern with an open plan and a lot of glass.

Krass, a German industrialist with several companies in renewable-energy industries, created SilverYachts to build with sustainable practices. He developed a series of fast, fuel-efficient models sporting a signature design—long and lean—to stand apart from the majority of multideck white superyachts.

“Initially, we wanted to build two yachts and stop,” Krass says. “Only after having established such a great team of 200 people from scratch did it become clear that we had to continue.”

Krass partnered with his friend Espen Øino, founder and principal of the Monaco-based design studio Espen Øino International, to create the Silver fleet. The two have known each other for more than 20 years. They met when Krass contracted Øino to extend his 118-foot (36-meter) boat.

“With Espen, I have trust and friendship, plus we share the same values and interests,” Krass says. “Of course, I also respect Espen’s creativity, deep knowledge and experience. We have fun bouncing around ideas and developing new things together while skiing, swimming or partying. This kind of work is the best part of yachting.”

Krass and Øino spent countless hours developing the direction of what would become SilverYachts, including chatting on a ski lift in the Austrian Alps. “I kept a tape recorder in my ski parka pocket for note-taking,” Øino says.

Eventually, Krass hired experienced craftsmen to build the yachts in Western Australia. The 240-foot (73-meter) Silver (now called Rabdan) was the first launch in 2007. Bold is the company’s fifth launch.

“She carries the same conceptual DNA and is a true long-range cruiser,” Øino says. “Most superyachts cruise the Med and Caribbean, but those in the Silver fleet have traveled widely worldwide.”

She also represents a technological evolution from the earlier yachts. With her high-speed displacement hull, her angle of entry, the shape of her bow and stern, and her lower fuel consumption, Bold has proved the most efficient yacht in the Silver fleet to date. Even with her additional volume, Bold uses MTU engines similar to those aboard previous builds. She can reportedly reach nearly 24 knots at maximum speed, and has a range of 5,000 nautical miles at 15 to 16 knots.

Why the military look? Øino says that at the time of Bold’s conception, there had been a surge in piracy in Indonesia and Africa. The styling, he and Krass believed, might act as a deterrent when cruising off the beaten track.

“Overall, the driving impetus for Bold’s design was to have increased volume, expanded deck space and the naval architecture to be able to carry and handle more stuff,” Øino says. “When Guido and I talked about what was missing from his other boats, he said he wanted the capability to carry a helicopter, larger tenders, perhaps a submarine and toys galore.”

With an area of 4,300 square feet (399 square meters) on the main deck alone, Bold can handle all of that and more.

“The yacht is well-suited to what it was built for,” says build Capt. Todd Leach. “We don’t use much fuel, we go pretty fast and we can carry just about anything. We even used to have a Mini Cooper on board. Right out of the yard, the yacht worked well. I have a fabulous, clean, paperless bridge. We have dynamic positioning and a stern thruster to keep us pointed wherever we want. We have zero-speed stabilizers. … You name it, this boat has it.”

“I also wanted the interior to feel as if it had close relationship to the water,” Krass says. “We created six separate zones in one large room. The result is one generous space that incorporates intimate corners. This concept worked out well for our family. Even after being together nonstop for long stretches, we all still like each other.”

Since taking delivery in July 2019, Krass has spent many months with family and friends on board. Before the Covid-19 pandemic, there were several soirées with 150 people or so. During working hours, the family takes over the yacht’s 3,229-square-foot (300-square-meter) loft.

“Sometimes we were fighting for bandwidth,” Krass says. “Each user had to explain why he or she needed it more urgently, or make the best joke.”

Øino says one of his favorite features aboard Bold is the winter garden abaft the salon. It has wraparound sliding glass doors that can fully open to the outside deck.

“There is the feeling of as much space as one would have on a much bigger boat,” Øino says.

Since her launch, Bold has traveled from Australia to the Middle East, to the Mediterranean, across the Atlantic to Florida, the Grenadines and the Bahamas, up the U.S. East Coast to Canada, and then back on the northern route to Gibraltar and the Mediterranean.

“After having journeyed 30,000 nautical miles in the first year without any technical problems,” Krass says, “we will now start a longer world cruise bringing us to many unknown parts of the globe, as well to the America’s Cup in New Zealand. We will work and travel with the new digital freedom. The yacht will be available for charter on our way, and guests can profit from our experience in relevant areas.”

At the same time, Krass fully intends for SilverYachts to continue daring to be different. While Øino would not divulge much about the next 278-footer (85-meter), Silver Square, he enthused about SilverYachts’ SpaceCat, a 118-foot (36-meter) power catamaran being built in conjunction with the Australian management team, at the company’s Chinese facility in Guangdong province.

Once again Krass and company are stepping out of the design comfort zone and creating a new wave for new generations.

Bold is Ready to Charter

Bold is built to Passenger Yacht Code requirements. She can accommodate 16 overnight guests in eight staterooms. The owner’s stateroom is on the upper deck, while three VIPs and four guest staterooms are on the main deck. The lower deck is dedicated to a crew of 22.

A massage room can double as a hospital in far-flung cruising locales. Other key guest areas include an “entertaining deck” with a 16-person dining table, bar and barbecue; and a sundeck with an eight-person Jacuzzi.

The main deck aft is suitable for helicopters such as an AW109. With the chopper removed, this becomes a party space with a discotheque and cinema.

The lowest weekly base rate to charter Bold is about $1.17 million.

For charter inquiries: HillRobinson.com or your favorite charter broker.