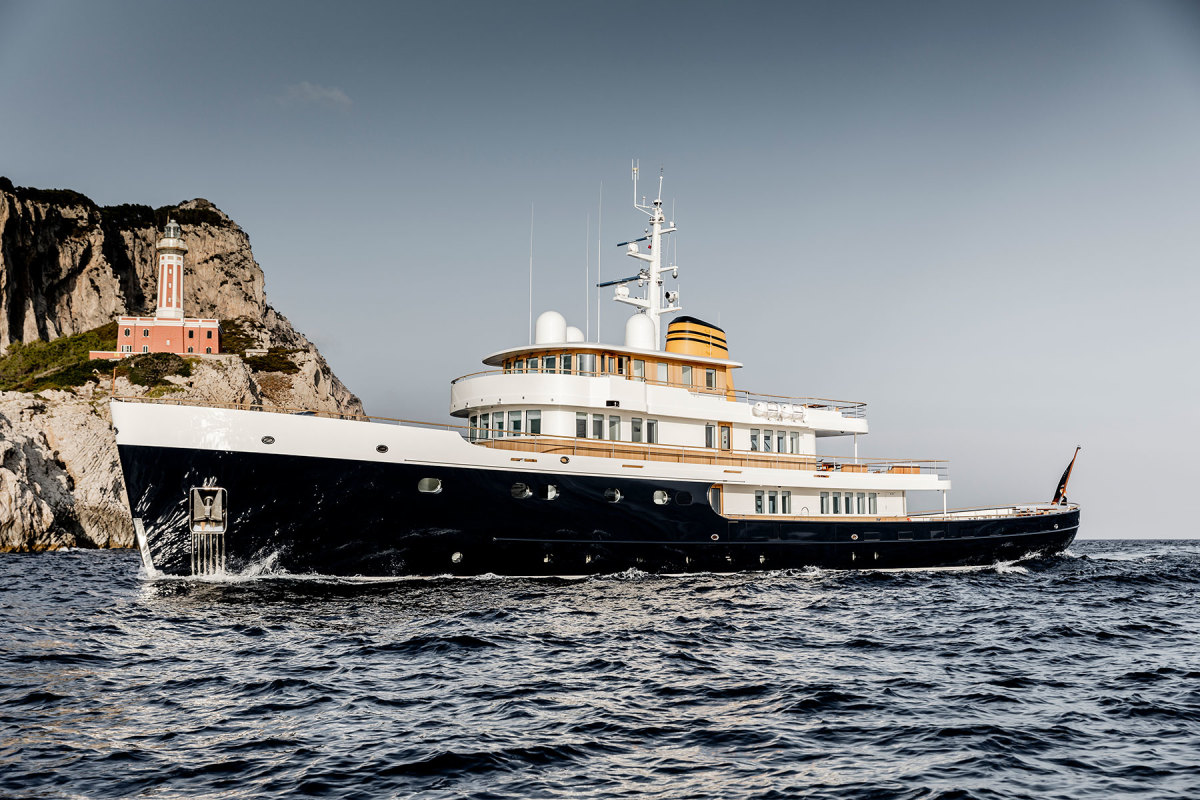 What happens when an experienced sailing yacht designer with a predilection for classic lines is commissioned to create the exterior and interior design of a motoryacht?

You get the 184-foot (56-meter) Blue II. With her sweeping sheerline, gently raked bow, canoe stern, midnight blue and white color palette, and proud golden-yellow stack rimmed with black stripes, Blue II strongly resembles a 20th-century steamship. But with naval architecture and styling by Hoek Design, she is every bit a 21st-century yacht, intended to explore polar regions including the Northwest Passage yet be at home cruising the Mediterranean.

Hoek Design, founded in 1986 by Dutchman Andre Hoek, is a prolific design firm renowned for its diverse fleet of sailing yachts. Hoek has penned a number of modern sailing yachts, but he is especially noted for his aesthetically pleasing, classically styled designs. His work includes the line of Truly Classic sailboats and J-Class recreations such as Lionheart, Topaz and Svea. While Hoek has a few motoryacht concepts tucked into his portfolio, he never had a large motoryacht under construction—until Blue II.

“Several years ago, we published a preliminary design for a traditional-looking, explorer-type motoryacht, one that we thought would appeal to our sailing clientele,” Hoek says. “As our client base gets older, we imagine they might be looking for more comfort and space than a sailing yacht offers. Our Blue II clients were made aware of that design in our newsletter and approached us about working with them on a conversion from a 1960s Dutch-built commercial motor vessel.”

The initial idea was to rebuild the buoy-laying vessel, so Hoek contacted several possible builders, including his old friend Mehmet Karabeyoğlu, founder and CEO of Turquoise Yachts in Turkey. Hoek had worked with Turquoise on a few sailing yachts over the years and felt the yard would be perfect for the project.

“I knew the vessel in question,” Karabeyoğlu says. “I had previously been asked to inspect it for possible conversion by a different party.”

In 2016, Project Lombok, as Blue II was initially dubbed, commenced. But early on, it was determined that much of the original steel had lost its integrity. The majority of it would have to be replaced.

“It would be safer and more efficient to build from scratch,” Karabeyoğlu says.

The survey and findings convinced the Blue II clients—two long-term partners in business as well as close friends—that they needed to build from the keel up. They held firm to the commercial boat design Hoek had drawn for the conversion, but could increase the yacht’s length and beam, and optimize the underwater shapes and performance.

After many design iterations, Hoek recreated the classic exterior lines and planned an interior layout. Partway through the build, the owners called in British-based Vickers Studio as a consultant on interior details such as soft furnishings and lighting. They admired John Vickers’ work on a couple of other yachts. For Blue II, Vickers introduced specialty items such as space-saving cantilevered desks in the staterooms and upper deck lobby.

“The owners of Blue II wished to meld a classic look with a bright, clean, modern interior—one that was fundamentally laid-back and comfortable for family life aboard,” Vickers says.

Blue II embodies a nostalgic aesthetic. However, her systems, propulsion and performance belie her looks.

“As the owners are heavily invested in supporting numerous green initiatives including ocean conservation,” Hoek says, “we designed her with a single-screw diesel-electric propulsion system for low emissions and to be extremely fuel efficient. Also, with her insulation she is well suited to either cold or hot climates.”

Blue II represented a number of firsts for Turquoise Yachts. While the yard had done a major rebuild on the classic motoryacht Haida 1929, Blue II was an entirely custom project that needed a new engineering platform. Blue II is the first single-screw yacht from Turquoise, is the yard’s first yacht with a diesel-electric propulsion system, is the yard’s first IMO Tier 3 compliant vessel, and is its first ice-class yacht.

The yacht’s propeller is driven by a gearbox with two electric motors and two propulsion generators. A single, fixed-pitch propeller was chosen for ice-class compliance and for fuel efficiency. Blue II has a bow thruster and a stern thruster that can propel the yacht to a modest speed in case of emergency. Four stabilizers, two fore and two aft, make her comfortable in a seaway, Hoek says.

“At 11.5 knots, she burns less than 140 liters [37 gallons] of fuel including the complete household load,” Karabeyoğlu says.

Hoek adds, “For a yacht that is approximately 785 gross tons, the ability to cruise at such a speed with such low consumption using only one generator is quite a feat.”

Keeping the yacht low to the water, in accordance with her design brief, meant that the engine room had to be as compact as possible. This requirement created challenges in terms of extra space for stowage.

“Being a round, canoe-stern hull, the standard way for stowing a tender underdeck did not work,” Hoek says. “So, we established large deck hatches to stow the tenders belowdeck from the top.”

Karabeyoğlu says Florida-based Nautical Structures helped to make the retractable tender crane disappear horizontally on deck. With tenders and toys out of sight, guests have free rein to enjoy an uncluttered aft deck.

Other challenges in the exterior design included balancing the heights of freeboards, deckhouses and the superstructure with Blue II’s bow and stern.

“To acquire the classic look that was required, the superstructure is partially clad with teak, yet the open bulwarks are reminiscent of the workboat heritage of the yacht,” Hoek says.

Working with Hoek, Vickers and Amsterdam-based Dols & Co. Interiors, the owners selected most fabrics, marble, furniture and furnishings. According to Vickers, the interior, which is a fusion of New England beach cottage and Euro chic, reflects the owners’ everyday style.

Karabeyoğlu, who personally owns a sailboat that Hoek designed, says that even though Hoek had little experience with large-motoryacht design, “I never had a doubt that he could pull this project off.”

He adds with a laugh, “Blue II is built to break ice, but I hope she never has to. I’d hate to see her ruin that amazing paint job.”

With the recent sale of 249ft/76m Project Arrow, Turquoise Yachts now has 6 yachts in build concurrently 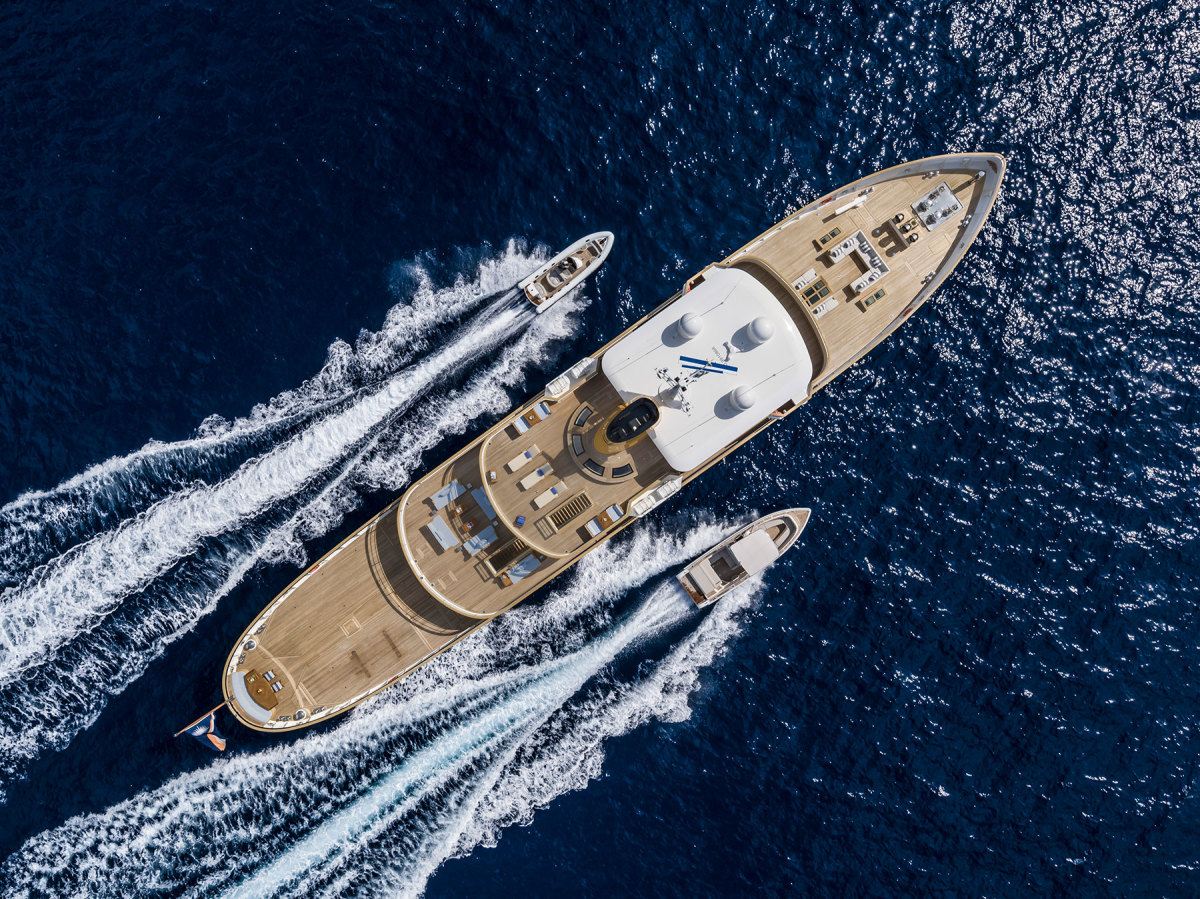 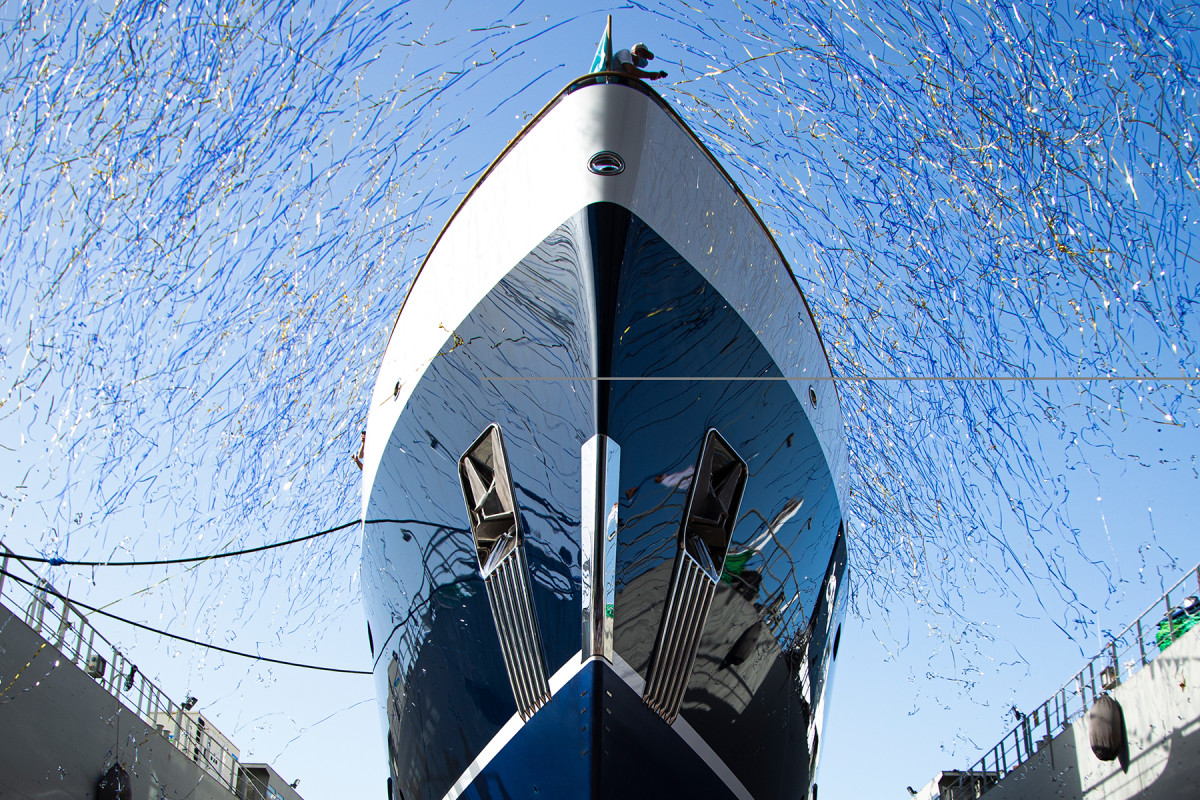