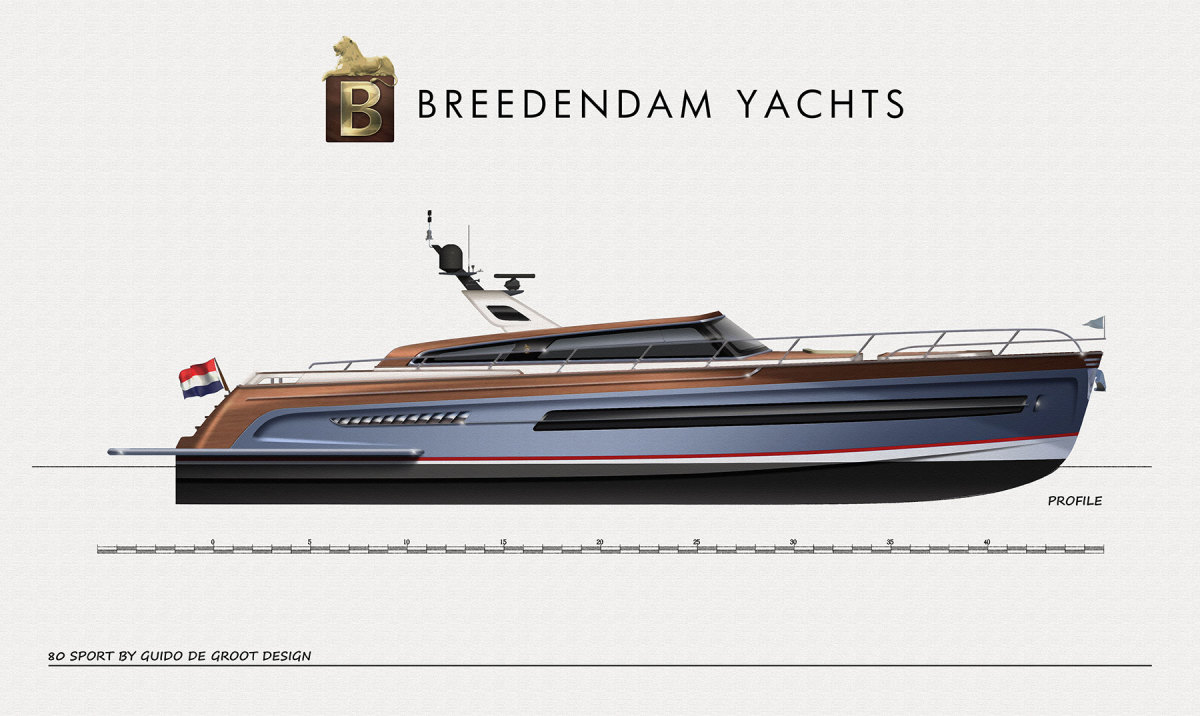 The Leeuwarden-based shipyard, Breedendam Yachts, revealed its latest superyacht concept: The 79-foot/24-meter convertible Eightzero sports yacht. Penned by long-time Breedendam collaborator, Guido de Groot – who was also responsible for designing the WW2 British Navy-inspired Breedendam Fourzero and Sixzero boats – the concept aims to “take a fresh look at how a classy gentleman’s sport yacht should look” according to her designer, by taking the lines and level of outfitting beyond what is expected from a typical large, open yacht.

De Groot explains: “We were looking to try out some new lines to make a much more aggressive 24-metre concept with a really striking appeal for clients in the Mediterranean, and which we expect to be particularly popular with the American market.”

Designed with various interior layout possibilities and propulsion options, the Eightzero sport is home to a large open outdoor entertainment deck with different seating areas, including one in front of the wheelhouse – a feature more typically found on modern explorer vessels.

She features a spacious multifunctional aft deck. This carefully thought out space is perfect for guests to relax and take in their surroundings (removable furniture can be placed here) and for deploying tenders and toys. In addition, her large aft garage houses a tender, a WaveRunner and numerous other water toys.

Created with socializing in mind, a great deal of attention has been given to ensuring that exterior and interior spaces blend seamlessly together for a relaxing onboard experience, with the large main deck aft cockpit area designed so that it can easily become part of the saloon area once it is closed off.

Accommodation is provided for up to eight guests across three cabins, comprising one master, one VIP cabin and one additional guest stateroom, all of which are ensuite, as well as one crew cabin which houses two crewmembers.

Performance-wise, the Eightzero can either be powered by three Volvo Penta IPS 1200 engines, or alternatively, for those looking to really pack a punch, she can also be equipped with large twin MTU or MAN engines for a top speed of more than 40 knots.

As for when the Eightzero might be seen on the water, her designer is confident that it wouldn’t take too long to build her. “We are already quite far on with the design, so this could come to life within two years, providing we had the right client interest.”