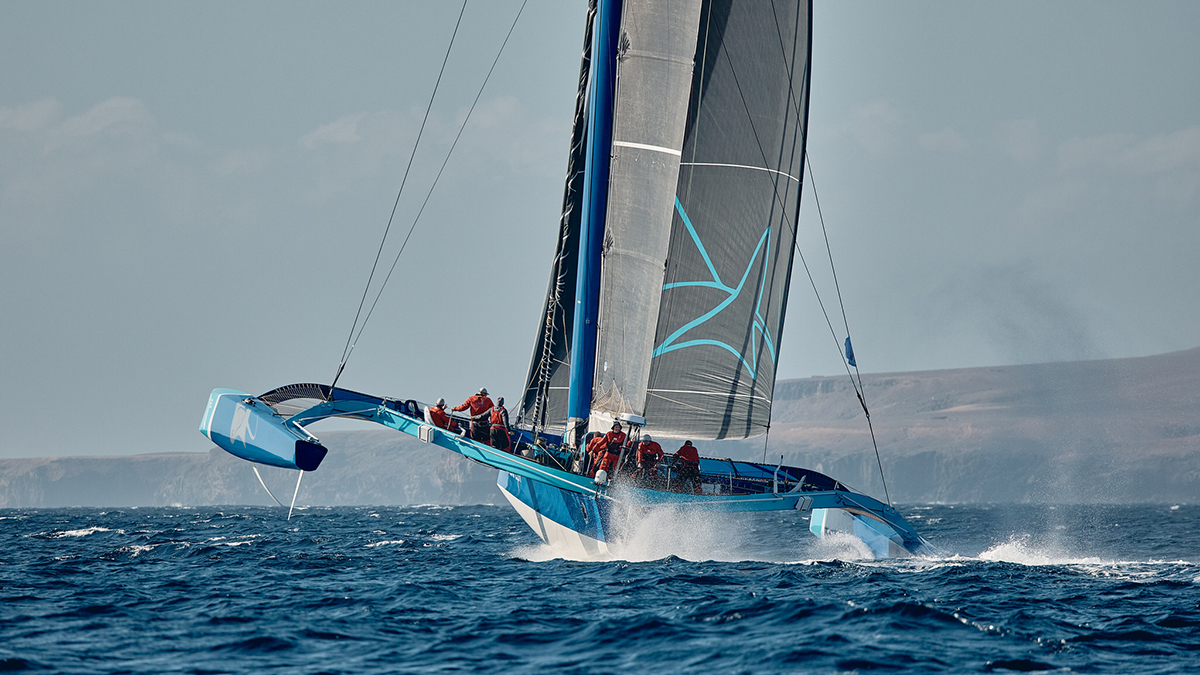 The eighth running of the RORC Transatlantic Race has attracted its strongest ever fleet, with a varied line up ranging from the 100ft canting keel Maxi Comanche to a double-handed team on the 32ft JPK 10.10 Jangada. Thirty teams, with crew from 27 nations, set off from Lanzarote to Grenada yesterday, Saturday 8 January, 2022.

Contesting for RORC Transatlantic Race line honours are three 70ft trimarans. Peter Cunningham’s MOD70 PowerPlay made an impressive start, ripping off the line at speeds of over 30 knots, with a crew that includes America’s Cup sailor and double Olympic Gold Medallist Giles Scott on board. PowerPlay was first to clear the passage between Lanzarote and Fuerteventura and after 24 hours of racing had a 40-mile lead over Jason Carroll’s MOD70 Argo (USA) and Giovanni Soldini’s Multi70 Maserati (ITA).

Before the start British multihull supremo Brian Thompson, who is tactician on Argo, commented: “It’s going to be a fantastic competition between four boats for Multihull Line Honours. The winner will be the team that manages these powerful boats, especially in the rough conditions, and the one that takes the best route. This year the trade winds are not as normal as they should be, so for the record we will have to wait and see. It is always exciting to race across the Atlantic; it hasn’t got any smaller or any easier!” 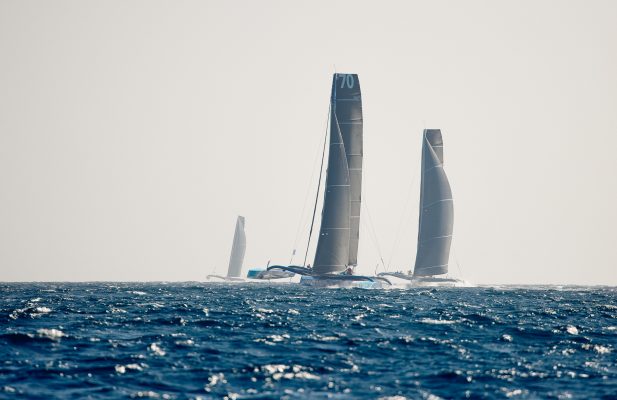 Also racing in the MOCRA fleet are Alex Thomson and Neal McDonald. Thomson, making his first competitive outing since announcing his retirement from IMOCA 60 racing, is sailing aboard Ken Howery’s Gunboat 68 Tosca. Tosca is one of many yachts still heading north-east as complex weather patterns sent many of the fleet north of the rhumbline, rather than the conventional ‘south ‘til the butter melts’ tradewind route.

Onboard photographer and crew member Patrick Condy reported: “Settling in well and speeding along. Ken Howery leads the max speed score – 26.1 knots! Not super warm onboard and only getting colder further north.” 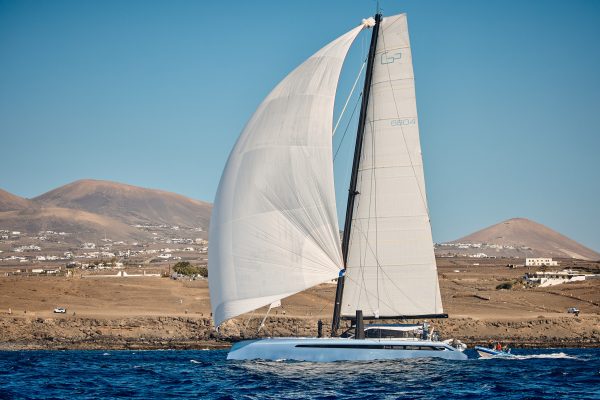 Alex Thomson and Neal McDonald are aboard the Gunboat 68 Tosca in the 2022 RORC Transatantic Race. Photo James Mitchell/RORC

Whilst there is a high pressure system north of the Cape Verde islands, a low-pressure system tracking from Nova Scotia is forecast to disrupt the north-easterly trade winds in the next 24 hours for the RORC Transatlantic fleet.

The key decision for the leading boats is when to gybe west; Go too early and the wind will decrease, go later and there is the possibility of 40-knot headwinds and big waves. This morning the 100ft Maxi yacht Comanche was first to turn their nose south-west towards Grenada. 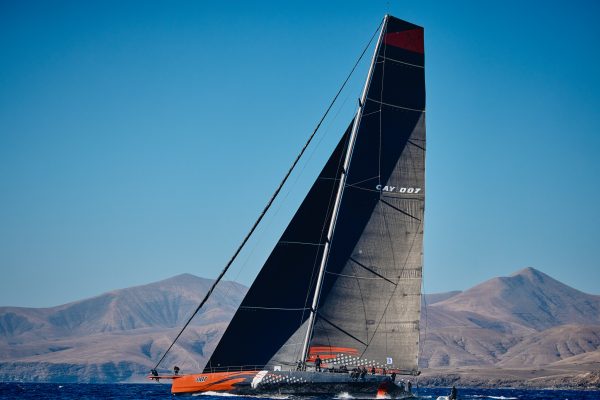 Comanche is the largest yacht in the 2022 RORC Transatlantic Race. Photo James Mitchell/RORC

Comanche, skippered by Mitch Booth for its new owners, has an all-star cast onboard and will be eyeing the transatlantic record as well as monohull line honours. The giant monohull, often nicknamed the ‘aircraft carrier’ for its exceptional beam, is the current holder of the monohull west-east transatlantic time to beat (Ambrose Light – Lizard Point) at 5d 14h 21m 25s.

Also competing in IRC Super Zero are a number of former Volvo Ocean Race yachts, including the Volvo 70 L4 Trifork, with ocean racing legend Bouwe Bekking aboard as principal helmsman and strategist.

Some of the closest racing could be in the IRC Zero class, with the Botin 52s Caro and Tala going head to head, along with the Botin 56 Black Pearl. After 24 hours of racing the three had made equal ground to the west, Tala some 18 miles north of class leader Caro, with Black Pearl a similar margin further south. 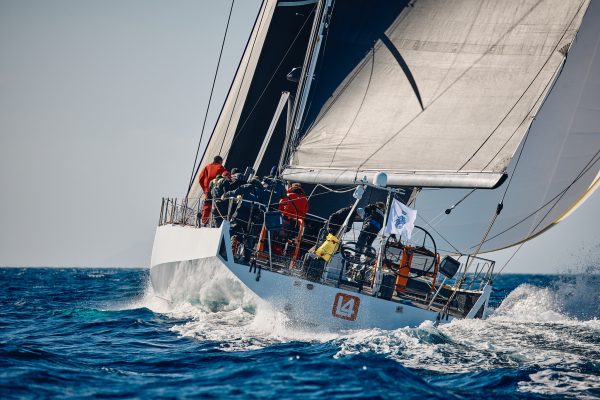 Within IRC 1 there has been a split in tactics, with some boats opting to take rougher sea conditions in favour of good breeze by heading north early, while boats that stayed further south are slowed in the wind shadow west of Tenerife island.

However, a long-term strategy may yet pan out for the southerly boats, as Chris Jackson explains from on board Pata Negra: “Looking at the extreme north track, it seems to us to be very uncomfortable and also risky on getting a route south later in the race, of course this could change. We are sticking closer to the rhumb line, which will hopefully give us a better route south later.”

Meanwhile the lowest rated yacht in the RORC Transatlantic Race could yet be one of the most competitively sailed. Jeremy Waitt and Richard Palmer are co-skippers of the JPK 10.10 Jangada, one of the most successful and experienced double-handed teams around. 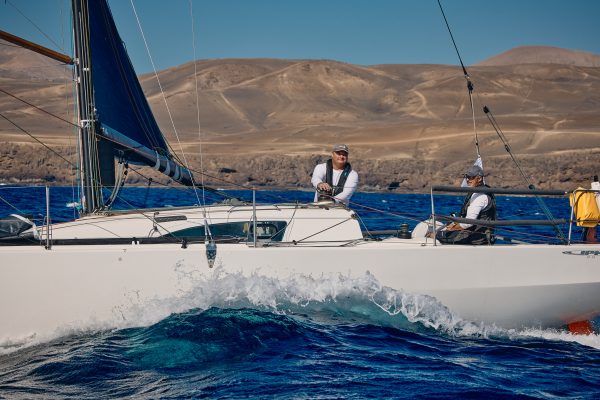 Richard Palmer commented before the start: “We are a small boat in a big ocean and looking at the weather we’re going to be in big waves, and our light boat gets rocked around much more than the larger entries. The biggest challenge for us is fatigue. With only two of us on board, staying awake is one of the biggest tests.”

Jeremy Waitt added: “Our biggest strength is that we have raced thousands of miles together, including this race, and in light winds we think we could take an advantage compared to the big boats. The bigger boats will tend to get much faster into new weather systems and that can be a disadvantage. For Jangada, the weather tends to come to us, so keeping out of rough weather is much harder.”