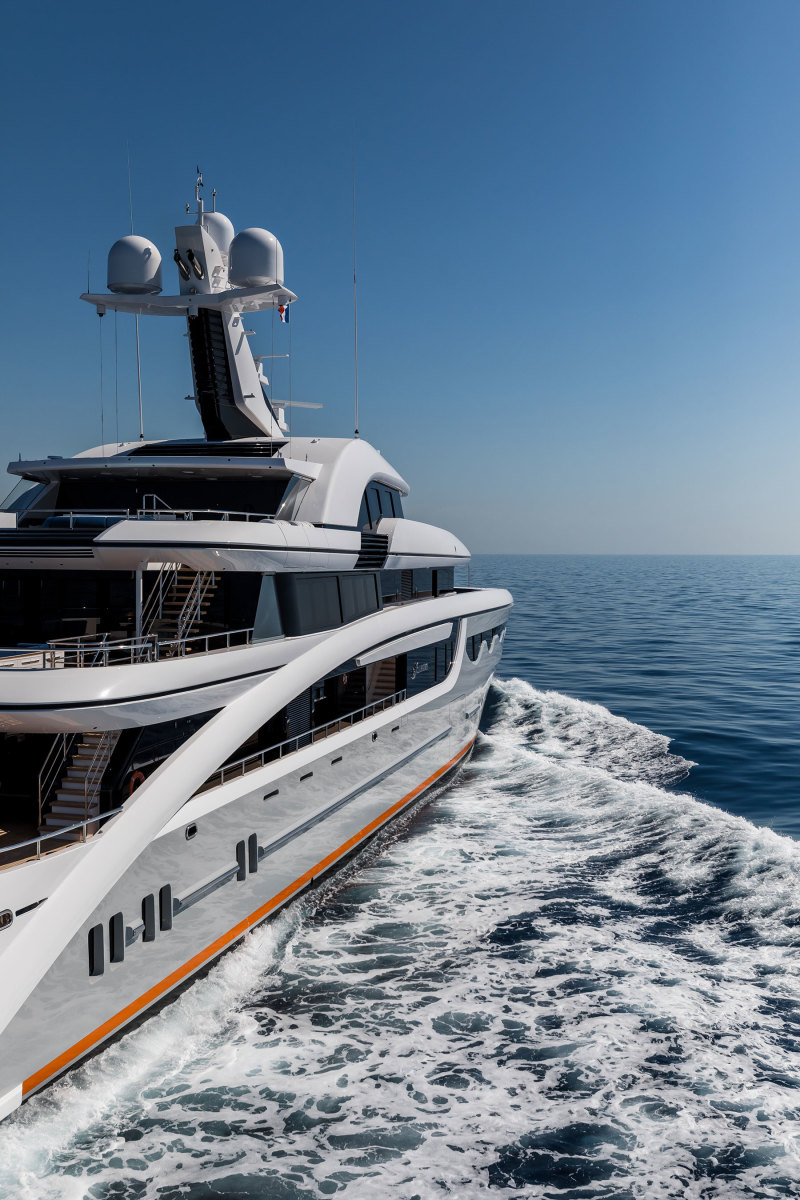 Earthbound nature and cosmology provide the predominant design ethos of the 223-foot (68-meter) Abeking & Rasmussen Soaring. Working in close collaboration with the owner, Germany’s Focus Yacht Design wove these themes into the fabric of the yacht in direct and subtle ways.

“An interior design reflects the personality of the person for whom it is created,” says Thomas Mühe, managing director of FYD. “It stands to reason that an interior is all the more remarkable if the client has an interesting story to tell.”

Having developed a relationship with the owner during the four-year build, Mühe is privy to any deeper meaning behind the various design elements he integrated into the yacht. “However,” he adds, “even without knowing precisely the owner’s intent behind the special pieces we created, the artwork has universal appeal.”

At the onset of the build, Abeking & Rasmussen invited FYD to enter a design competition for a new 68-meter project. FYD is in Bremen, not far from the Abeking yard, and has worked with the builder on previous projects. For the most part, the only parameters Mühe and his team had to go on were the build’s length and volume. Given such latitude, Mühe tried some exterior styling ideas that he had long been contemplating.

“I have been experimenting with implementing a solid line stretching from the bow to the swim platform for a while, trying to treat a yacht as a sculpture rather than a building,” Mühe says, “and it finally came together with Soaring.”

To streamline the yacht’s profile, Mühe treated the window spaces as a continuation of the superstructure. For instance, the bow window on the main deck appears to be one surface. The exterior is gray-white with a striking boot stripe painted in Hermès orange.

FYD’s renderings, design details and presentation captivated the client, and FYD was contracted to create the yacht’s exterior and interior—a first for the firm, and an opportunity to truly own the design.

The owner emphasized that he wanted Soaring to be iconic, and never mistaken for any other yacht. He wanted a classic yacht with a contemporary appearance and a modern design—opposing ideas that required FYD and Abeking to take a holistic approach.

Mühe spent considerable time with the owner at his various homes, in the mountains and at the shipyard, and then incorporated custom artwork and totems that held special significance for the owner. For instance, one unique piece is the dining area ceiling light, which is based on the owner’s thumbprint. The main-deck salon is conventional in terms of layout, with a lounge area aft and dining space forward, but is divided to port and starboard by backlit panels featuring constellations with meaning to the owner. These works of art incorporate genuine meteorites (interplanetary matter more than 4 billion years old), bringing cosmology down to earth—or rather, to the sea.

The craftsmanship and artistry aboard Soaring also go beyond the obvious. In the central foyer on the main deck, at the base of the stairway, is a cast-bronze sculpture by Claus Hartmann, depicting stylized hippos lolling in the water. In some circles, hippos represent a folkloric symbol of auspiciousness. “When the guests pass by en route to their staterooms, they can touch the hippos’ ears for good luck,” Mühe says.

The four guest staterooms and the full-beam VIP are forward on the main deck. Each is differentiated by its own nature symbol: nautilus, ginkgo, turtle, bamboo and water lilies, reflected in headboards and travertine inlays in the bathrooms.

Even with all the complexity in the design details, Soaring still presents a relaxed atmosphere with abundant open space. The interior palette is a cool, neutral gray with cognac accents.

In order to keep the living environment calm and comfortable, Mühe says, his team reduced the amount of materials and colors, and used veneers in dark and bright contrasts. This choice is particularly obvious on the owner’s minimally furnished upper deck. The bedroom faces aft, and there’s no television. The headboard is an eagle, ideal for dreams of soaring.

Forward on this owner’s deck is a library and observation lounge. Glazed on three sides, this space offers views of the outdoors in daylight hours. The library also can double as a cinema. The bookshelf is made of backlit onyx. All interior work was done by the German company Rodiek to Focus Yacht Design’s specifications.

Outside relaxation space, dining and activities are available on every deck. Forward on the owner’s deck, above the tender garage, is a driving range where the owner and guests can practice their golf swings using biodegradable balls. The beach club includes a steam room, sauna, massage and gym. And the two custom Compass tenders have paint jobs mirroring the yacht’s.

The Covid-19 pandemic did affect the build process but didn’t delay delivery. “The final construction end phase was anything but ordinary,” says Jörg Kleymann, senior project manager at Abeking. “With the help of a crisis management team and an elaborate safety and hygiene implementation of a two-shift production, Abeking & Rasmussen proved its efficiency and flexibility by delivering the yacht on time.”

Nature had taken its course, but the planets were aligned for Soaring to be delivered. Maybe someone touched the hippo’s ear.

Abeking & Rasmussen has a lot of diversity in its order book