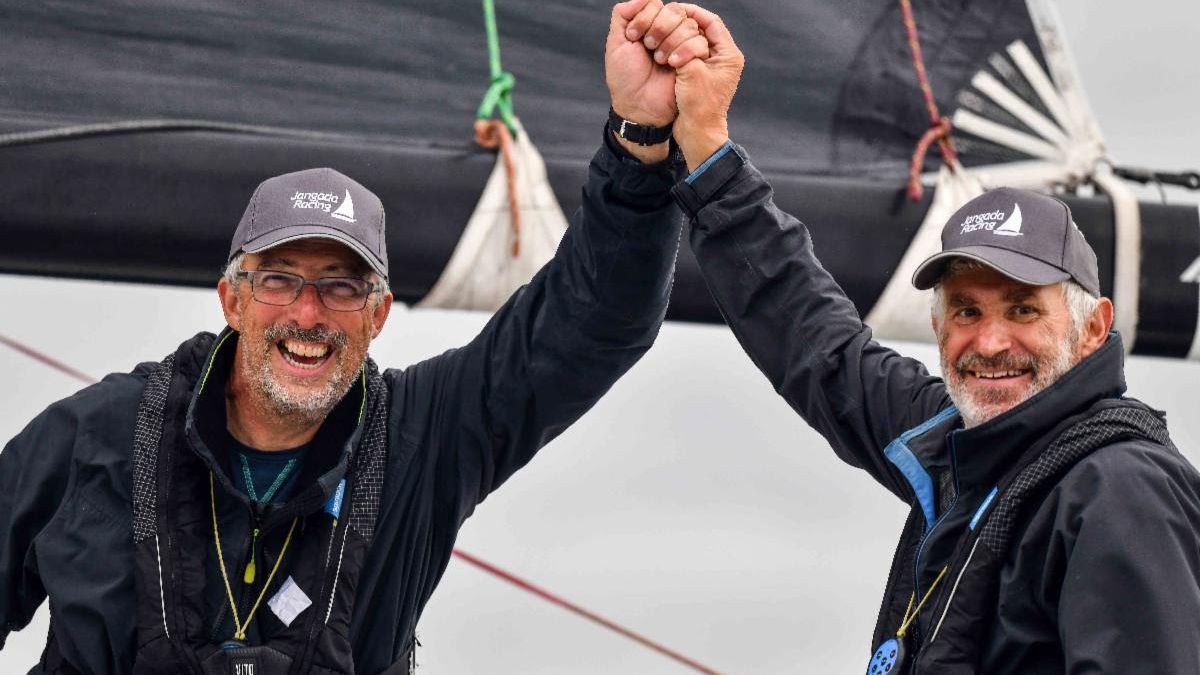 The Sevenstar Round Britain and Ireland Race was a long, slow affair, eventually decided by just over 7 minutes. YW boat tester Rupert Holmes racing with Richard Palmer on Jangada took the overall win

A flurry of competitors in the Sevenstar Round Britain and Ireland Race crossed the finish line in Cowes today after an intense race which saw many boats take a full two weeks in order to complete the course.

Despite the light airs forecast, the 1,800-mile race took even longer to complete than predicted for many, with some boats having run very low on food and non-emergency water by the time they finally crossed the line.

Ten teams finished the race today, with the very relieved crews enjoying an impromptu dock party on Trinity Landing was followed by a welcome meal at the RORC Clubhouse in Cowes.

Among them were Richard Palmer, sailing with Yachting World regular contributor and boat tester Rupert Holmes on the JPK1010 Jangada, who are currently leading as 1st IRC overall, having finished this morning with an elapsed time of 14d 22h. They are also 1st IRC 3 boat and 1st double-handed team.

Though five boats are still racing none can realistically better the IRC corrected time scored by JPK 1010 Jangada, so the Royal Ocean Racing Club has declared Jangada the overall winner of the 2022 Sevenstar Round Britain & Ireland Race. 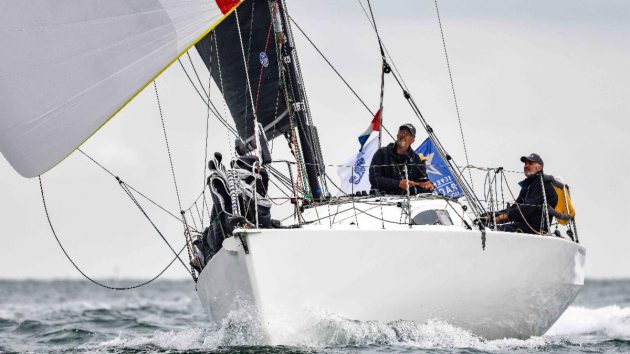 Round Britain and Ireland Race winners

The overall win was decided by the thinnest of margins, as after 15 days of racing, Jangada won overall on IRC corrected time by just seven minutes and nine seconds. Rob Craigie’s Sun Fast 3600 Bellino, racing two-handed with Deb Fish was 2nd.

In percentage terms, RORC calculates that Jangada won by just 0.03% of the time taken to complete a race of 1,805 nautical miles.

“Just a full-on race, absolutely no let-up; snakes and ladders all the way. The pressure was always on. Mentally this race was totally exhausting, but great fun with really close competition,” explained Jangada’s Palmer.

“The final 12 hours was incredible. As soon as Bellino crossed the line the clock started ticking and we had a goal to aim for. Our routing programme predicted we could reach that goal with two minutes to spare. I woke Rupert up and told him it was game on and we went for it.”

“This race really is the pinnacle of offshore racing because it offers absolutely everything; close racing on the IRC ratings and the race track has plenty of headlands and tidal gates, all with weather systems that are constantly changing. This race just throws everything at you and it tests you to the limits,” continued Palmer. 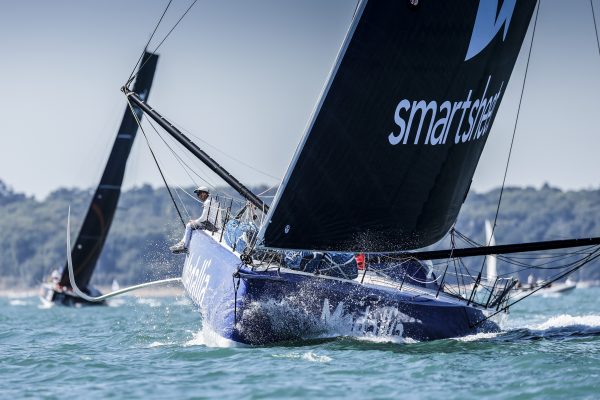 First to finish was Pip Hare on Medallia, this time sailing her IMOCA with a crew of five. Hare and team completed the circumnavigation in 10d 13h, with even the foiling 60-footer languishing at sub-3 knots at times as a high pressure system dominated the first portion of the race.

Medallia took over seven days to get to Muckle Flugga, at the northern turning point of the course, from the start on the Isle of Wight.

“It is not often I go into a race wanting to take line honours, but that really was a goal, so we are very happy,” commented Pip Hare. “We concentrated on trying to extend from the other boats in the race and get around the course as quickly as possible. I am really stoked to get line honours in a race around Britain and Ireland.”

“In the Vendée Globe it is a big deal to race around Cape Horn, but the Shetland Islands is way further north than Cape Horn is south. I’m very, very proud to have my name against line honours in this edition of the Sevenstar Round Britain and Ireland Race. I have full admiration for everyone out there; this is a tough race for all of us.”

Stronger breezes for the second week saw Medallia cover the eastern return leg in just over three days, and as Hare was pulling back into Cowes, competitors at the back of the fleet were rounding Muckle Flugga in near gale conditions. 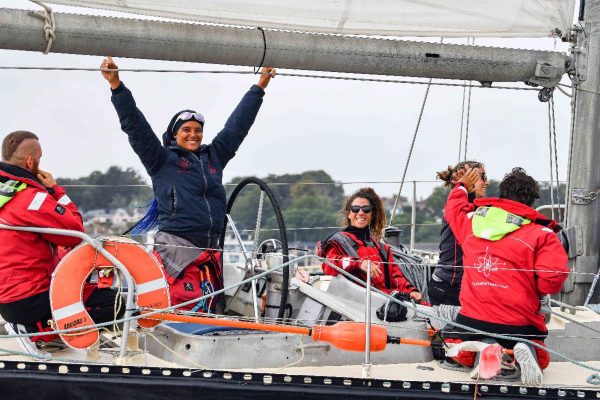 Next to finish was James McHugh’s Tquila, the first Class 40, sailing with a highly experienced crew of Brian Thompson and Alister Richardson.

“It was a fantastic race but very long,” commented McHugh after the finish.

“As we were passing Galway where my parents are from, a few boats had retired and the thought did cross my mind, but we carried on! It was a real change to see the scow bow boats pull out as it was interesting to match up against them to see how we would go against them.

“This is only my third Class40 race […] and Brian and Richard have been putting me through my paces to get up to speed. They are great sailors, really intuitive. It has been wonderful to do this race with them and work as a team.

“For me going around the Shetlands was something special; it is an incredible landscape.”

Former Vendée Globe racer Mike Golding was also in the Class 40 fleet, racing on Greg Leonard’s Kite (USA). “This was great fun to do, if rather long,” Golding said afterwards.

“We always saw that it was going to be a slow race but I don’t think any of us expected it to be quite that slow. Everything was very well prepared on the boat, we didn’t run out of anything. Greg is really organised and we even had enough water – we did economise when we saw the writing on the wall but, to be honest, we’ve got another two days left.”

“I love the Class40, it’s a fantastic class,” added Golding. “The boats actually feel like the first Open 60s; they feel very powerful and they are quick. They sail so beautifully, as a class I really like them.

“It’s interesting sailing on different boats and particularly the scows, which I know a lot of sailors don’t like, but don’t knock it until you’ve tried it because they are rather good. Kite isn’t particularly scow-ish but it is a powerful boat.”

“Hannes Leonard (Greg’s son) is really the hidden star in all this. Unbelievable. It’s a very long race for us, but for an 18-year old to have maintained the endurance and stamina and staying power to do a race like that is quite something.

“Hannes is a fantastic sailor and a credit to his Dad and his family. I wish I was that good at his age.

“These long races do take a lot of preparation and for Greg, this is part of his prep for the Route de Rhum (solo from Saint Malo to Guadeloupe in November) and that’s quite a commitment. But RORC’s Sevenstar Round Britain and Ireland Race is definitely accessible and it is a matter of biting the bullet and going out there and giving it a go.

“Understandably some of the competitors have had to retire because of time constraints, but most have stuck with it so that’s a testimony to all the people out there.” 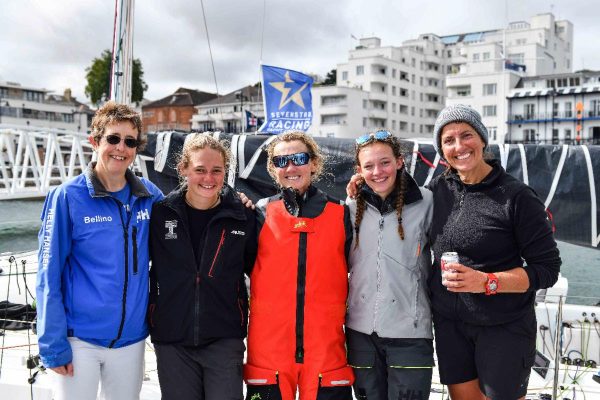 Of the 23 boat fleet, just four were still racing this evening, with 11 finishers.

The final boats still racing include Charlene Howard on her Sun Odyssey 45 AJ Wanderlust. Howard commented as she rounded Muckle Flugga:  “This has been a slow race so far but it is not mentally tough if you flip your thought progress.

“AJ Wanderlust and her crew (Robert Drummond) love sailing, so the longest on the water wins, right? We just try to enjoy all the magic of nature in its various moods. AJ Wanderlust does not come to start races, she comes to finish them!”