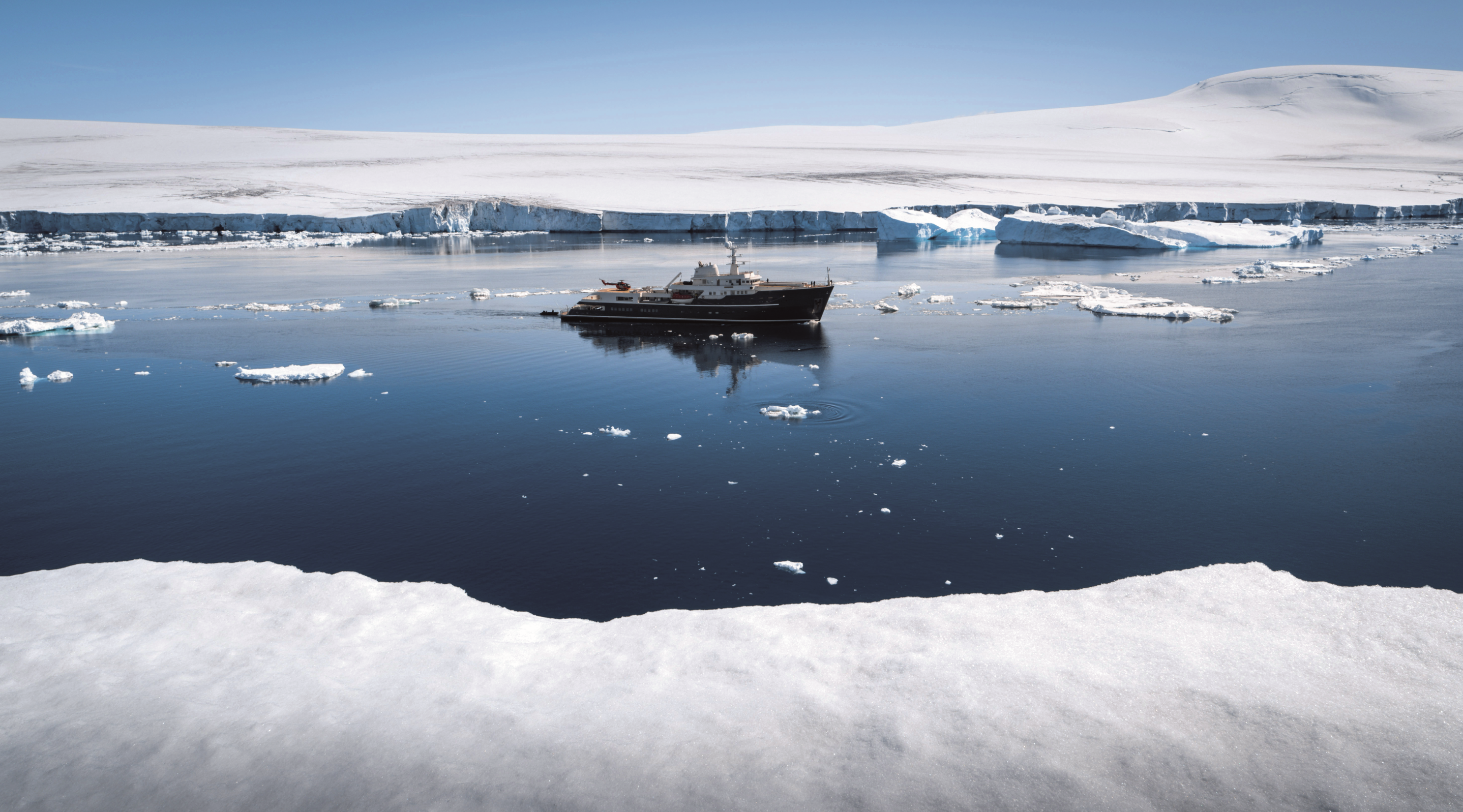 A conversion superyacht offers buyers an interesting way to explore. If your idea of a great superyacht experience is heading to Antarctica or voyaging to far off places through harsh conditions, then a conversion yacht may be just the ticket for you.

Recent market reports show one thing: traditional superyacht builders are busy – very busy. The 2021 Superyacht Market Performance Review by VesselsValue indicates a record number of orders for superyachts in 2021: 887, compared to 500 in 2020. On top of that, superyacht deliveries in 2020 were at an all-time low, as yards struggled with new Covid protocols and supply-chain issues.

It adds up to a huge build backlog across all superyacht sectors, with builders having slots only available in 2023 or beyond. Buyers wanting an alternative approach that jumps the queue a little may consider a conversion project.

“The timeline (of a conversion project) depends on the donor vessel type,” says Stephan Vitus, head of project development for Icon Yachts. The Dutch builder has developed a strategy around being a specialist in total conversion projects, taking old commercial vessels and turning them into head-turning superyachts. 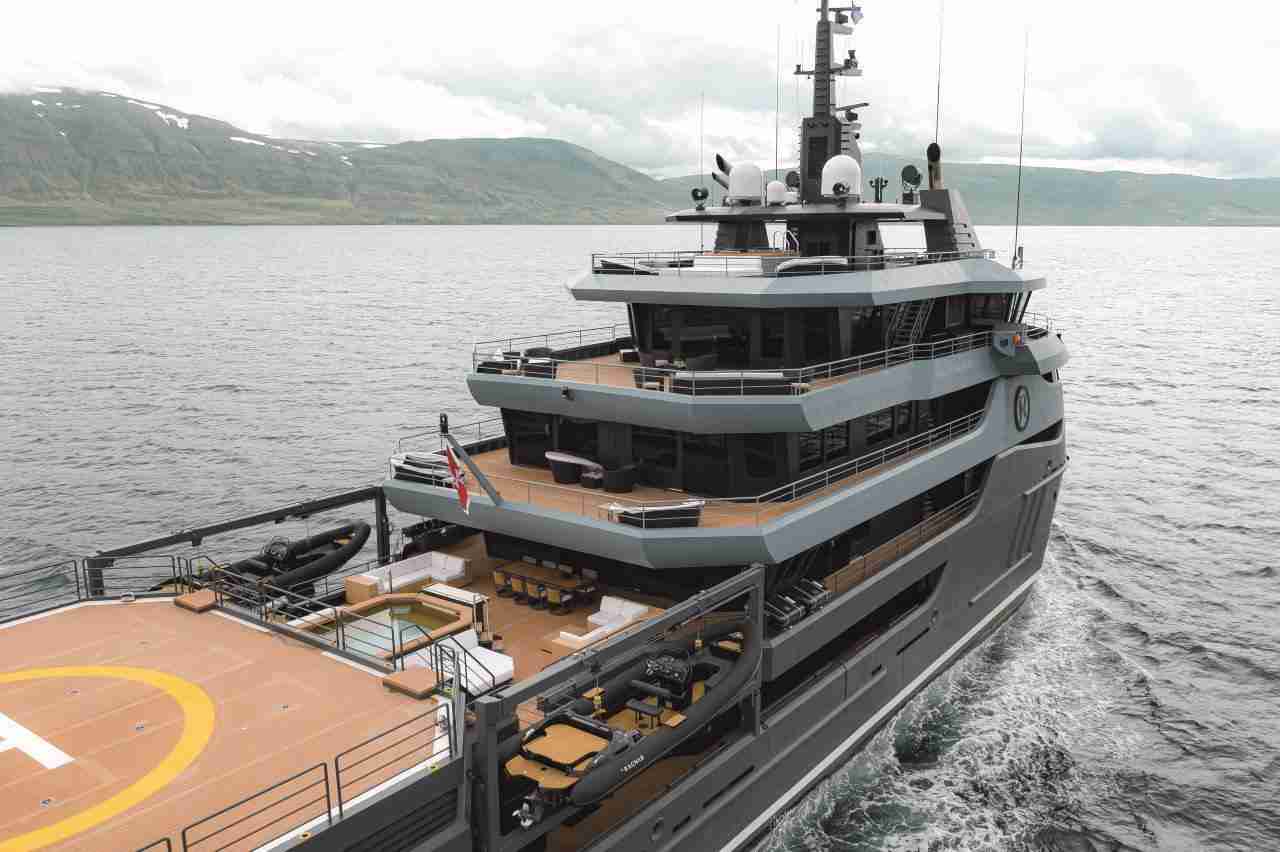 Vitus estimates that owners can build a conversion superyacht and save up to 40 per cent of the time it takes to build a comparable white yacht project. “The financial aspect is also quite interesting; the results are unique, and the vessels are very potent,” Vitus says.

Icon Yachts launched Ragnar in 2020 after a conversion process that lasted two-and-a-half years. The original boat was an offshore supply vessel, a type commonly used for offshore oil exploration and drilling work. Such vessels need to be tough and seaworthy to handle big seas and weather without fail.

In 2020 and 2021, offshore supply vessels (OSVs) were available for a fraction of their original build value, as oil prices collapsed thanks to reduced travel due to Covid restrictions. In November 2021 Peter Sand, chief analyst for shipping data firm Xeneta, said that OSV prices have been “in the doldrums” since oil prices crashed from US$100 per barrel in mid-2014. He estimated that about one-third of the OSV fleet was sitting idle.

OSVs may be preferred, but they are not the only type of vessel to become a donor vessel. Naval or patrol ships, ocean tugboats, icebreakers, fishing vessels – even a yacht transport vessel – have been or can be transformed into luxury superyachts.

Sam Tucker, head of superyachts for VesselsValue, a maritime and aviation data firm, says that there are just 34 such conversions in his database, making it a very niche category. The big challenge is in finding and securing the right donor vessel. “Ragnar was a special case,” he explains. “The doner boat was built in 2012, so the engines were still young, and the hull was ice-classed, which is important to owners wanting to explore the poles.”

OSVs are ripe for conversion as their size range is often between 40m and 80m, and because of their long range, Tucker says. Some OSVs are ice-classed, but many are not, as they were often built for use in the North Sea between Norway and the UK, which is cold and stormy but not icy. Some boats listed as OSVs may be designed for very specific work and not suited to conversion. Tucker says that ocean tugboats, generally classed as an OSV, could work as a conversion project thanks to their tough hulls and seaworthy build.

VesselsValue has about 8,000 OSVs on its database and approximately 6,000 superyachts. The potential for turning a portion of the OSV fleet into superyachts depends on oil prices, as multiple analysts have linked the value of OSVs to the cost of oil. The price of oil rebounded rapidly from a US$30 per barrel low in 2020 to about US$80 a barrel by late 2021. However, the US Energy Information Administration predicts that oil prices will steadily decline through 2022 and 2023. 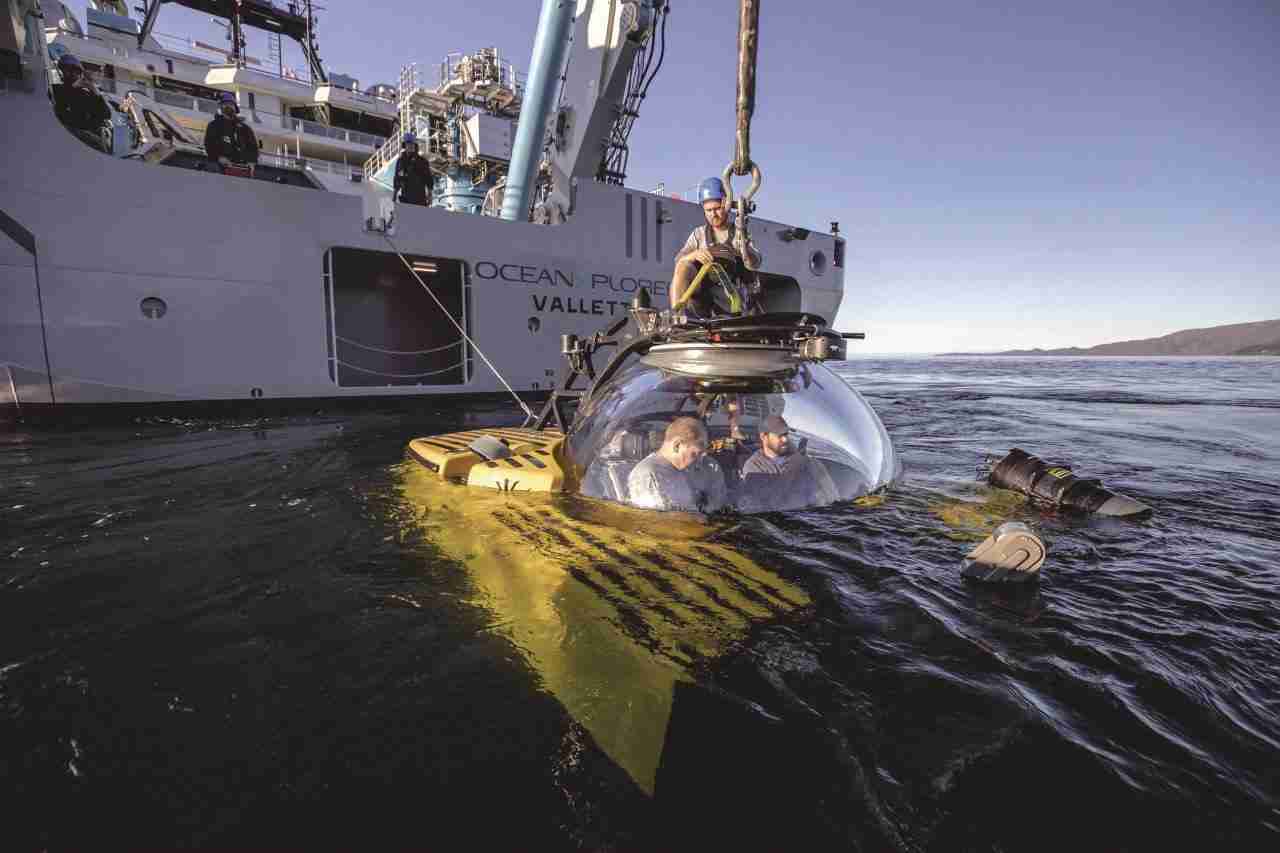 Damen’s OceanXplorer is an ocean research vessel and former OSV

But OSVs are not the only candidate for donor vessels. In 2015, Icon Yachts launched the 77m Legend. In its previous incarnation it was a Soviet-era icebreaker built in 1974. Owned by a Dutch businessman, Legend is now on the charter market, offering trips for up to 26 guests to Antarctica, the Galapagos, South Georgia, and a host of destinations in the South Pacific.

Icon Yachts is currently working on Project Master, another conversion that will turn an offshore rescue vessel, built in 2001 by Norwegian yard Kleven, into a 70m luxury expedition yacht. The design is by Espen Oeino. Icon Yachts announced Project Master at the 2021 Monaco Yacht Show.

Stephan Vitus says another project that Icon is working on will result in a conversion superyacht of over 100 metres – the largest such yacht ever to be built.

Icon Yachts says it now offers a full service for conversion clients, starting with the search for a donor vessel

Icon Yachts is a specialist in this area, but they are not alone. Dutch yard Damen Group, which owns Damen Yachting (formerly known as Amels), has embarked on its own conversion business, which is kept separate from the yacht building business. Damen Shiprepair and Conversion launched the 87-metre OceanXplorer for hedge fund billionaire Ray Dalio.

OceanXplorer was an OSV built in 2010, and Dalio purchased it in 2016 to convert into a private ocean research vessel suited for filming and with fine accommodation.

WATCH: On board Christina O – the classic superyacht of Aristotle Onassis

For its part, Icon Yachts says it now offers a full service for conversion clients, starting with the search for a donor vessel. “We are locating vessels for a number of clients,” says Vitus. “That is a specialisation that we keep close.”

Finding the vessel starts with learning about client expectations, then finding the donor vessel that can match these. The vessel specs, engine time, hull design, existing general arrangements all have to be taken into account. It is the first, paid phase in the process that Icon is establishing at its yard. “It’s very transparent but very efficient,” says Vitus.

He adds that buyers interested in conversion yachts tend to be younger, more adventurous and more hands-on, taking every opportunity to visit their projects as they get built. For example, Jan Verkerk, the first owner of Legend, was reportedly visiting the conversion of his yacht at the Icon yard every day. With the launch of Legend, Vitus says that Icon received plenty of new interest.

Vitus says that conversions of commercial vessels into superyachts is relatively new. Harbour Yacht Services (HYS Yachts), based in Subic Bay, Philippines, has been doing conversion work for over a decade. The company has recently branched out to offer new yacht and brokerage services, but it began life by taking old Japanese fishing, whaling and research vessels and converting them into superyachts.

Buyers interested in conversion yachts tend to be younger, more adventurous and more hands-on, taking every opportunity to visit their projects as they get built 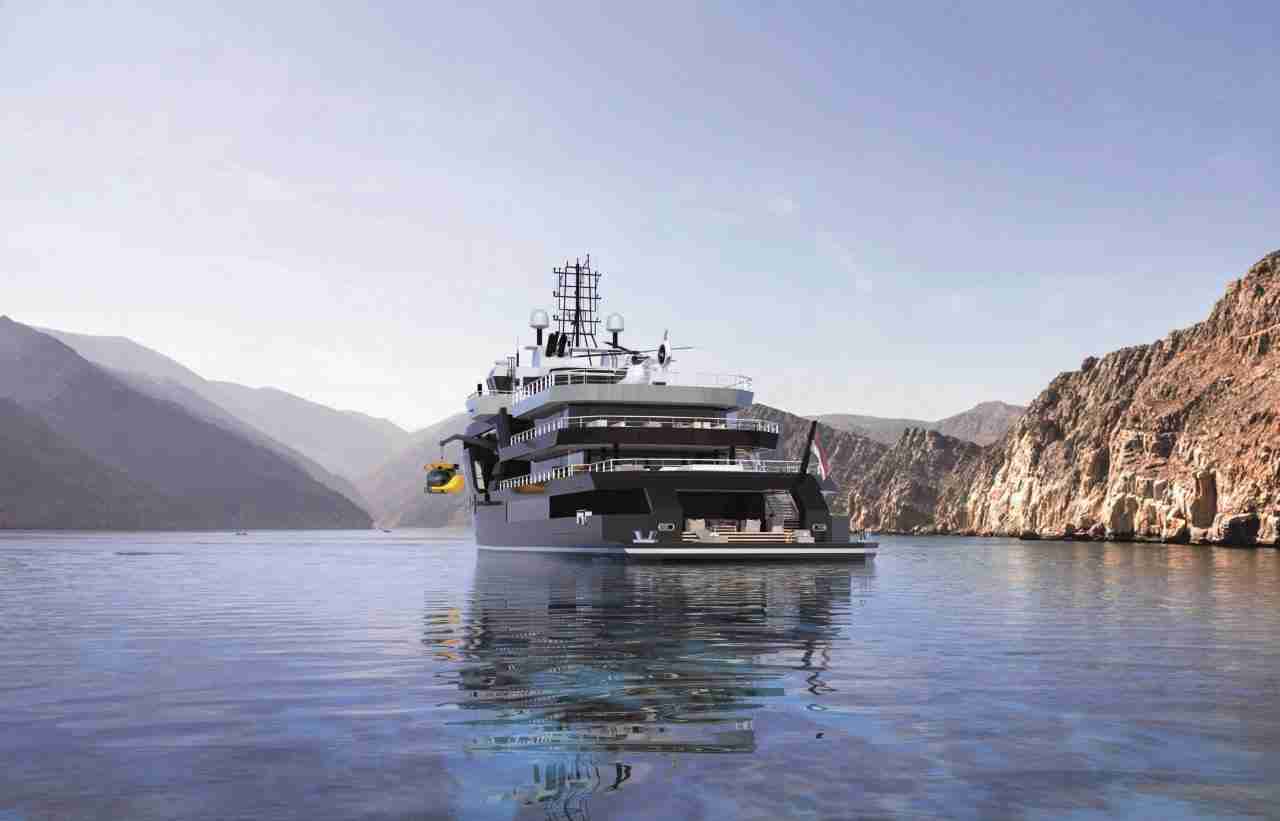 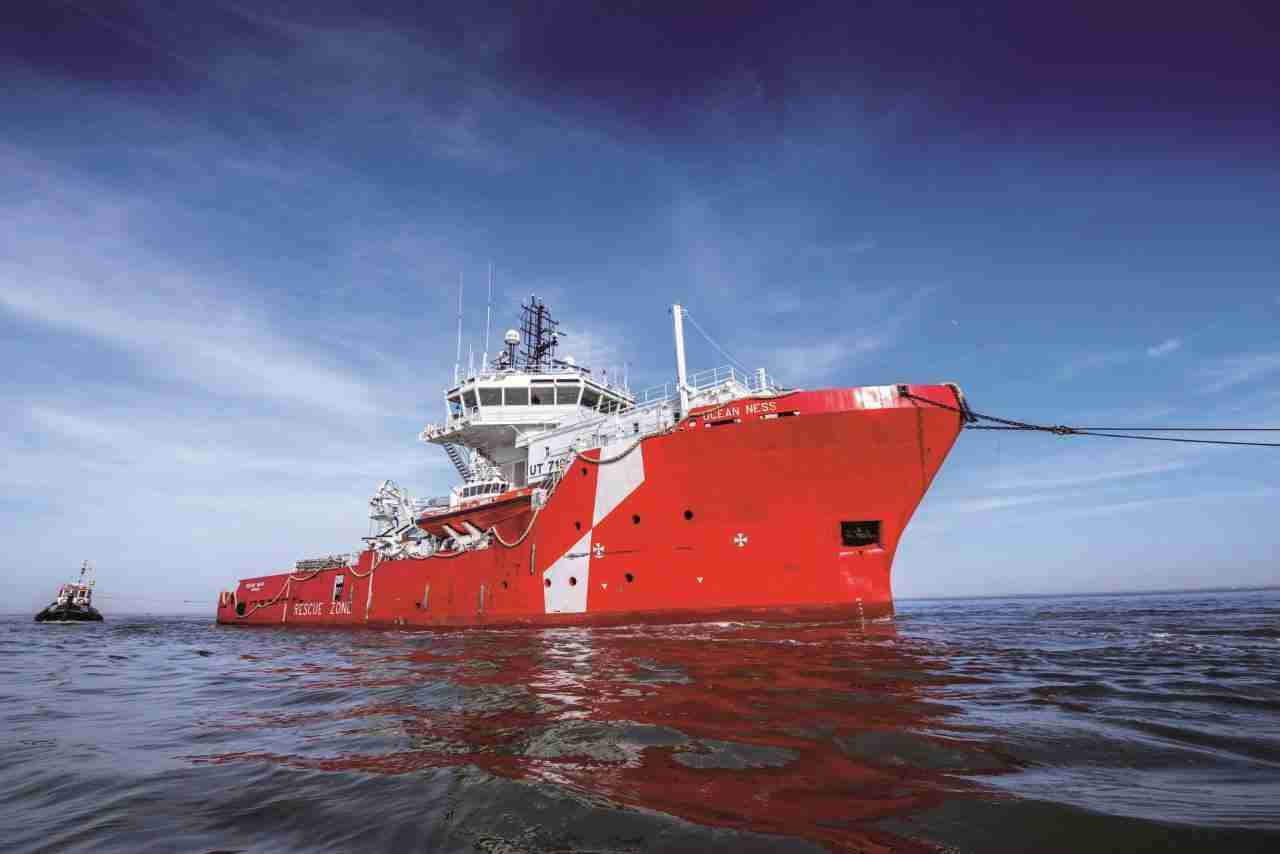 While shortened timelines and reduced cost may be attractive to buyers in this current period of booming superyacht sales and limited build slots, there is another aspect to the conversion yacht that may be attractive: they are in some respects a very green solution. Converting an existing steel vessel into a sturdy expedition yacht is a great way to upcycle and reduce waste and energy consumption.

And with the growing trend towards expedition-style yachts that can cover long distances, endure tough conditions and deploy a wide range of submersibles, tenders and toys, the converted OSV certainly offers a great option as the place to be.