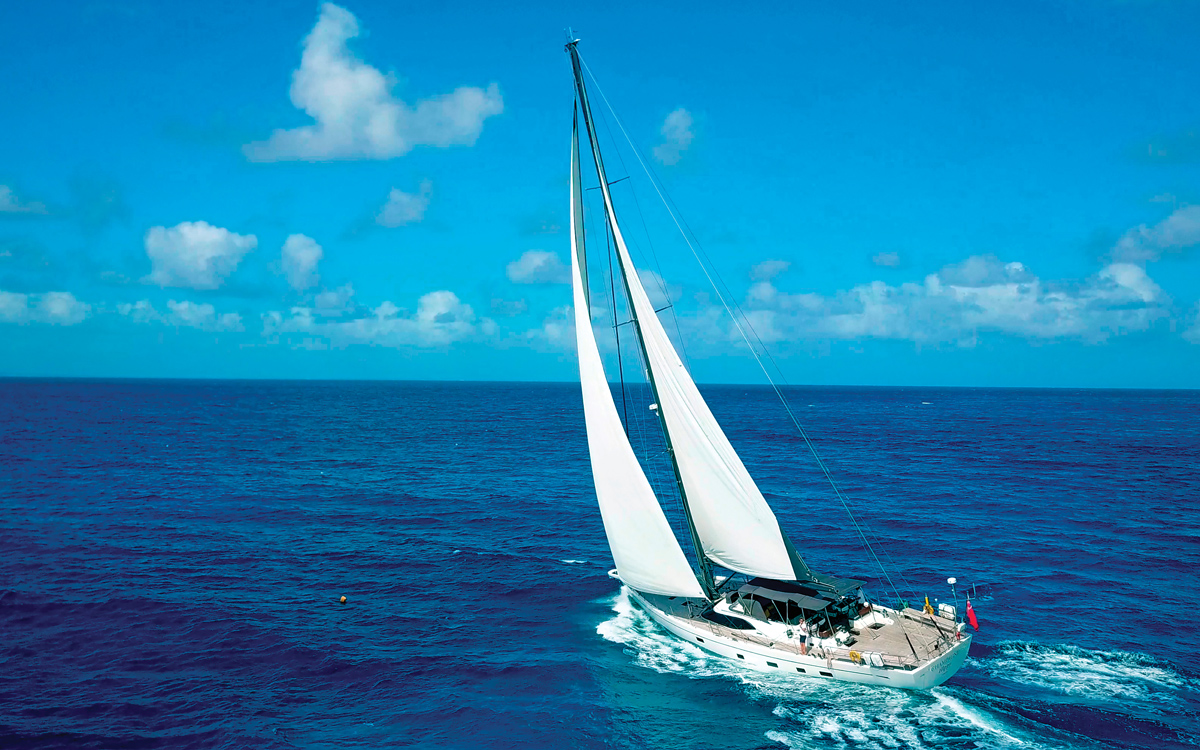 Champagne Hippy was formerly known as Polina Star III, the Oyster 825 that famously lost its keel and sank in 2015. She is now fully restored after a massive refit

Champagne Hippy was never expected to sail again. When the keel ripped off the 82ft Polina Star III in July 2015 it sent shockwaves through the marine industry, and left a £5 million yacht sunk in 40m of water, four miles off the Spanish Costa Blanca (the crew aboard was fortunately able to launch two liferafts and was rescued by fishermen soon after the capsize).

After some 12 weeks on the ocean floor, the yacht was raised, a complex operation that further damaged the broken hull. It was taken ashore in Spain and declared a write-off: anyone who saw the photographs of the shredded structure and silted interior would have expected nothing else.

Equally unsurprisingly, the legal wranglings surrounding the Polina Star insurance claim were lengthy and complicated. Enter the family-run yard Boats.co.uk, on Essex’s River Crouch. The yard is mainly a motorboat dealer but a separate division does a lot of salvage work for insurance companies. They were contacted by the insurance company handling the Polina Star claim as it needed somewhere to secure the yacht for up to two years while legal matters were resolved.

Polina Star III was trucked across Spain and France, and through the Dartford Tunnel, before arriving in Canvey Island, Essex. She was unceremoniously shipped by barge up the River Crouch to Essex Marina, and locked away in a compound, out of bounds even to the boatyard staff. And there she stayed, in quarantine, until summer 2018. 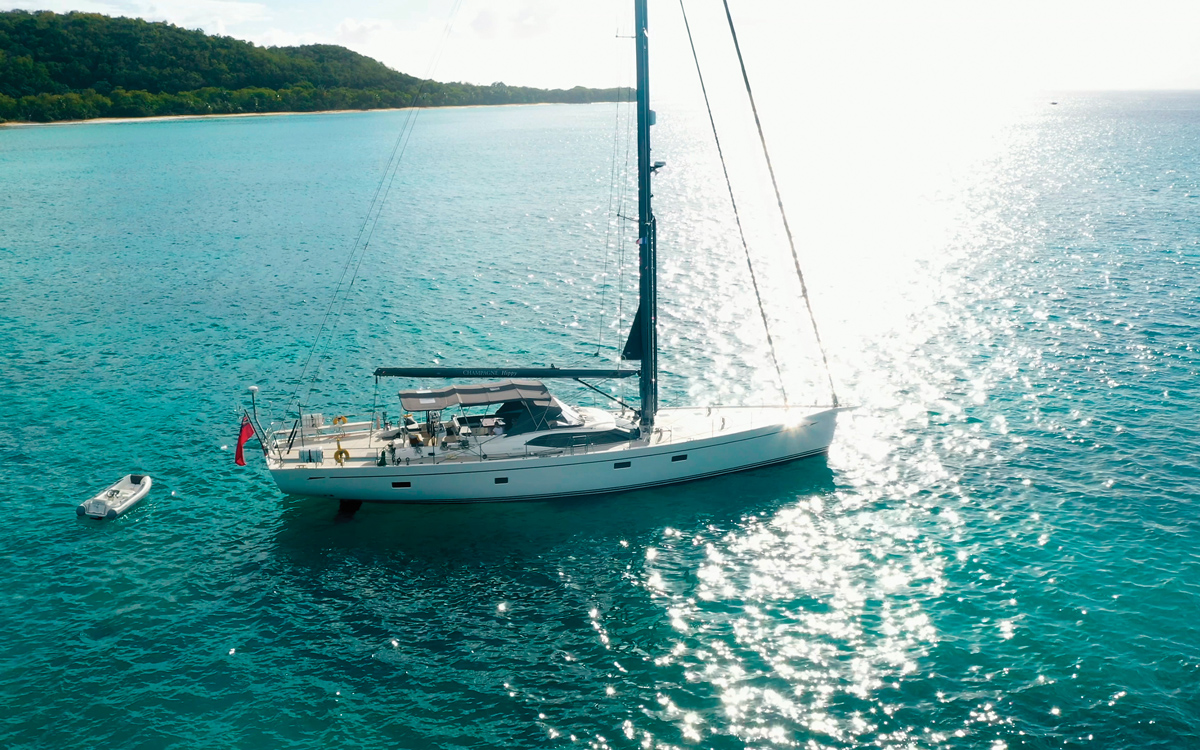 The refit was completed in 13 months, with a team working 24 hours a day at times. Photo: oysterluxurycharters.co.uk

The Polina Star sinking was notably the first and only keel failure an Oyster Yacht has ever suffered. The hull construction of the 825s used a different system to all previous Oyster yachts. After the capsize, Oyster replaced the keel grid structures in the remaining three 825s and returned to its original manufacturing process.

The enormous costs of the incident contributed to Oyster Yachts going into receivership in March 2018. Under the company’s new management, led by Richard Hadida, the company now moulds all its hulls in-house and has brought in a Lloyd’s Register inspector to survey all yachts regularly during the build process. 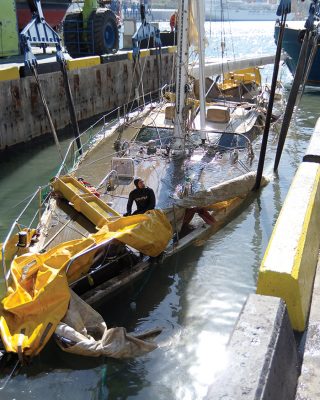 Both compasses were reused, although one had a jellyfish inside it… Photo: Yacht Russia

“When Oyster went bust the insurers settled with the owner and the owner relinquished the boat to us to reduce his costs,” recalls Nick Barke, one of four brothers who run Boats.co.uk. “We had £180,000 of costs tied up in the boat at that point and we had to decide what to do.”

The brothers decided to repair the boat. Although they don’t usually work on sailing yachts, they had an in-house team with the skills required, and a 12-acre yard with all the workspace ready. They brought in outside contractors where additional expertise was needed. But it was never going to be a small job.

“The boat had spent a few months on the sea bed; it wasn’t pretty to say the least, there were barnacles pretty much everywhere. The effects of saltwater had got into absolutely everything, it was dirty inside, it still had food inside the boat, which had gone off. So the first thing we did was physically clean the boat from top to bottom, got out all the sand and silt.

“Then we started to strip the boat back to its bare bones, and at that stage we were able to properly assess the issues and the damage that was underneath.” The damage to Polina Star has been well documented, and was the result of manufacturing issues in the keel/hull grid structure. When the keel detached, metres of hull laminate also peeled away with it.

“There was nothing wrong with the hull or the main matrix. What was wrong was the connection between the keel stub and the prefabricated matrix, which was insufficient to support it.

“The keel was 20 tonnes and the loads had been transmitted to the hull, which is vinylester resin and very strong. But when [the matrix] snapped at the waterline on the starboard side, the boat then rolled and pulled the skin off to almost deck level on the port side. Then the vertical bonds above the keel stub snapped one by one and the keel fell off. “The hole in the bottom of the boat was so large that you could have parked a Transit van in it,” recalls Barke. 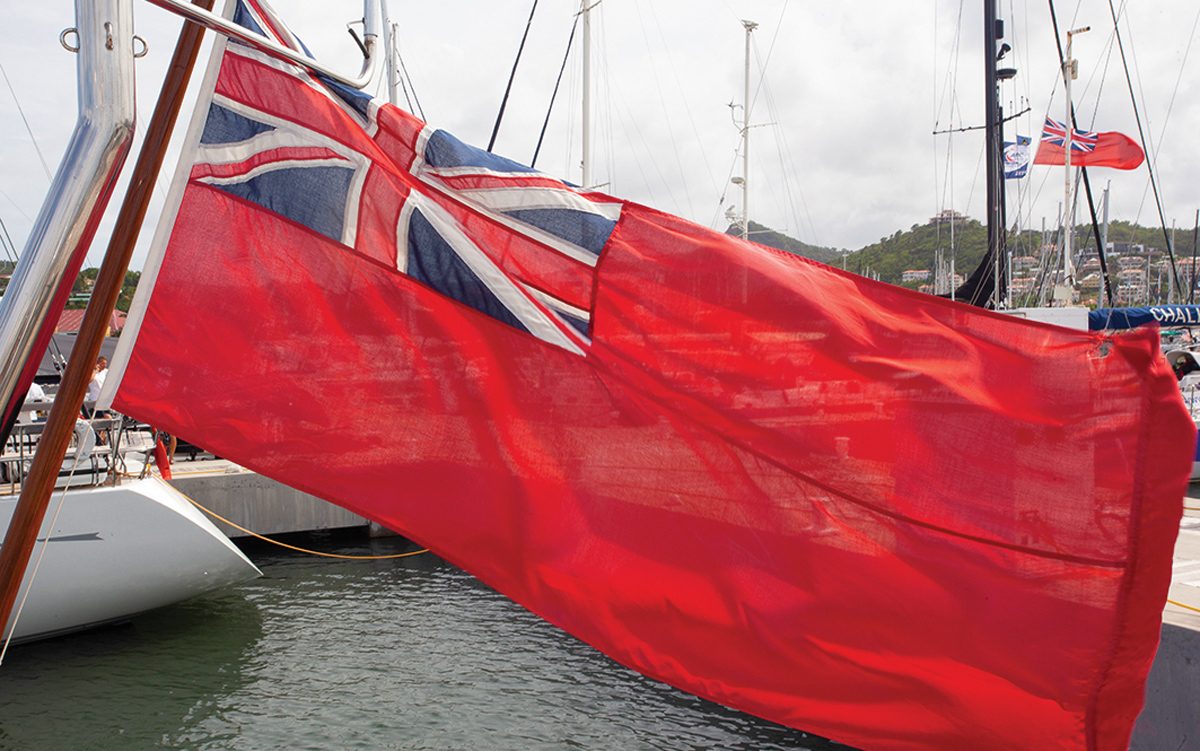 The original ensign from the Polina Star III, good as new after a wash! Photo: Claire Pengelly

The first stage of the rebuild was to strip out the original matrix. “More than half of the boat inside was removed, and the fibreglass was taken back to its bare skin. If you imagine a boat being laid up in its early stages, that was what it looked like,” Barke explained.

Next they created a plug to recreate the shape of the hull, and built a new, slightly modified keel stub for the keel, which had also been recovered from the seabed. This is a skilled area that the company specialises in. “We made the stub a little bit wider, slightly fatter at the back. Then we had the keel recast at Iron Brothers Ltd with the wider stub pattern, and then we physically started to lay up the fibreglass.”

The rebuild process was lengthy. “We’re talking four guys, seven days a week for six to seven months of laminating inside the boat – which took a little bit longer than I thought, to be fair,” admits Barke. By now, the time pressure was on, as Barke and his brothers had set themselves an ambitious target. 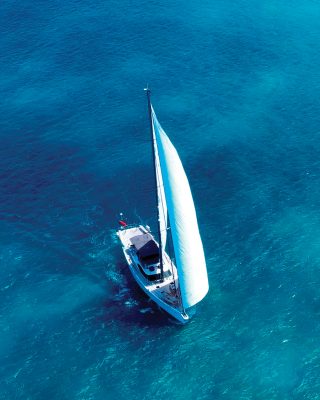 “We found a sticker on board the boat that said ARC 2014. I didn’t know what that was so I Googled it and I said to my elder brother, James, ‘I’d like to do that next year’. We are not sailors, we’re motorboaters, so I’d never sailed before but I liked the idea of it.”

They entered the ARC 2019, which meant they needed to be in Las Palmas in the autumn of 2019. That became the deadline to finish. Besides creating a new ‘belt and braces’ integral keel matrix, designed in-house with a yacht surveyor, Barke and his team also moved the galley forwards to make the boat more charter-friendly.

“The original cabinetry was teak and quite dark so we decided to change every piece of wood to American white oak, which lightened it all up,” says James Barke. “We had a team of four cabinet makers working on the boat from autumn 2018 right through to the ARC start line.

“We also wanted the boat rebuilt to the highest standards so we aimed for Category 0 MCA coding (worldwide charter, no exclusions) and passed with flying colours,” he adds. The deck gear features salvaged original parts, including winches and steelwork.

The mast had snapped 8m up, so a new 100ft mast was built by Formula Spars in Ireland, although they were able to reuse the boom. Half of the bowsprit had also broken off, and the Barkes’ team searched online for photographs of Polina Star III for a reference to recreate it.

A complete new suit of sails was required, made by Dolphin Sails, although when clearing out the boat the brothers discovered a virtually brand-new bagged up trysail and storm staysail still aboard. 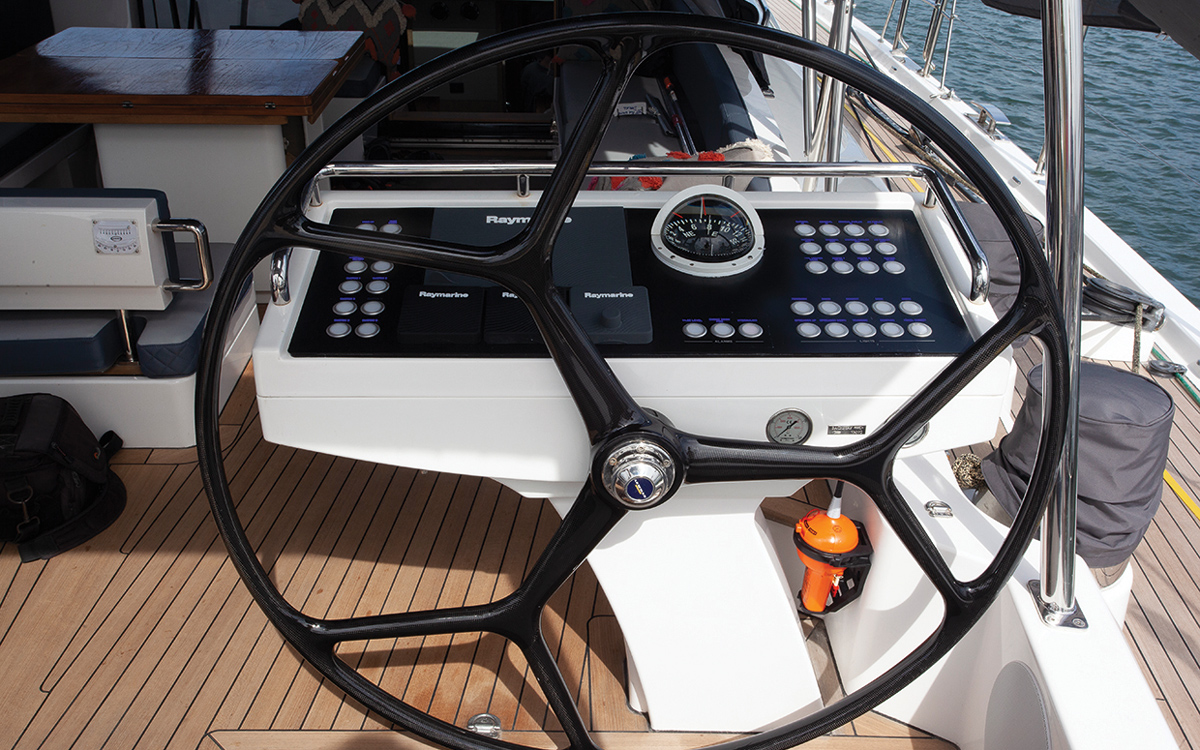 The carbon wheels are original, although the helm station was redesigned and fitted with new Raymarine electronics. Photo: oysterluxurycharters.co.uk

“We were able to reuse the steering hydraulic rams, the helm consoles, the carbon fibre wheels and the furlers (after a hefty service) as well as the windlass,” recalls James Barke. “The teak on deck was fine, we just had to change three planks that were damaged in the recovery. The teak deck is a work of art and testament to the quality that Oysters are built to.

“Lewmar supplied a new hydraulic system and we bought a machine especially to make all the new oil pipes.” The original port carbon fibre rudder had survived, but the starboard one was missing so they had a new one made in France.

“Everything mechanical and rigging wise is new. The original engine had corroded and electrolysis had got the better of it so we up-specced to a new Scania engine.” The boat is also fitted with twin Onan generators, a large watermaker and icemaker, electronics are Raymarine and the gallery appliances are Miele. The garage houses a new Williams 325 tender. 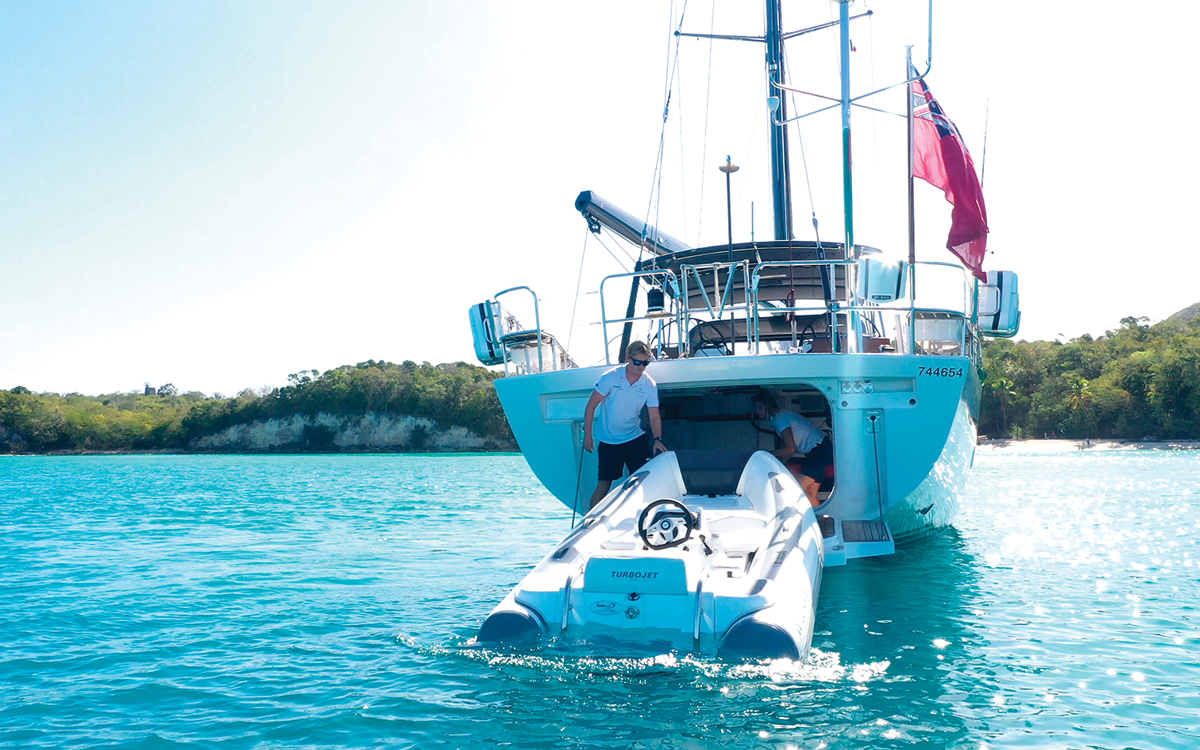 Champagne Hippy is fitted with a garage, giving space for tumble dryers, scuba gear and allowing the Williams tender to be deployed at short notice. Photo: oysterluxurycharters.co.uk

It was August 2019 by the time the structural work was completed and the engine bay fit out could begin.“We were cutting it a bit fine, we were finishing the boat on the way from Plymouth down to Las Palmas, so it’s been a long journey in every sense of the word,” recalls Nick.

Suddenly working with semi-custom yachting components presented a challenge. “The mast took nine months to make and the lead time for the engine was six months,” Nick adds. “Oyster’s suppliers were all great. A lot of these guys we hadn’t dealt with before, or even heard of, but they were all fantastic and loved the fact we were bringing her back to life.”

Champagne Hippy’s refit was a true passion project, driven by a team who were not sailors, but had the vision to create something special and make the most of a unique opportunity. 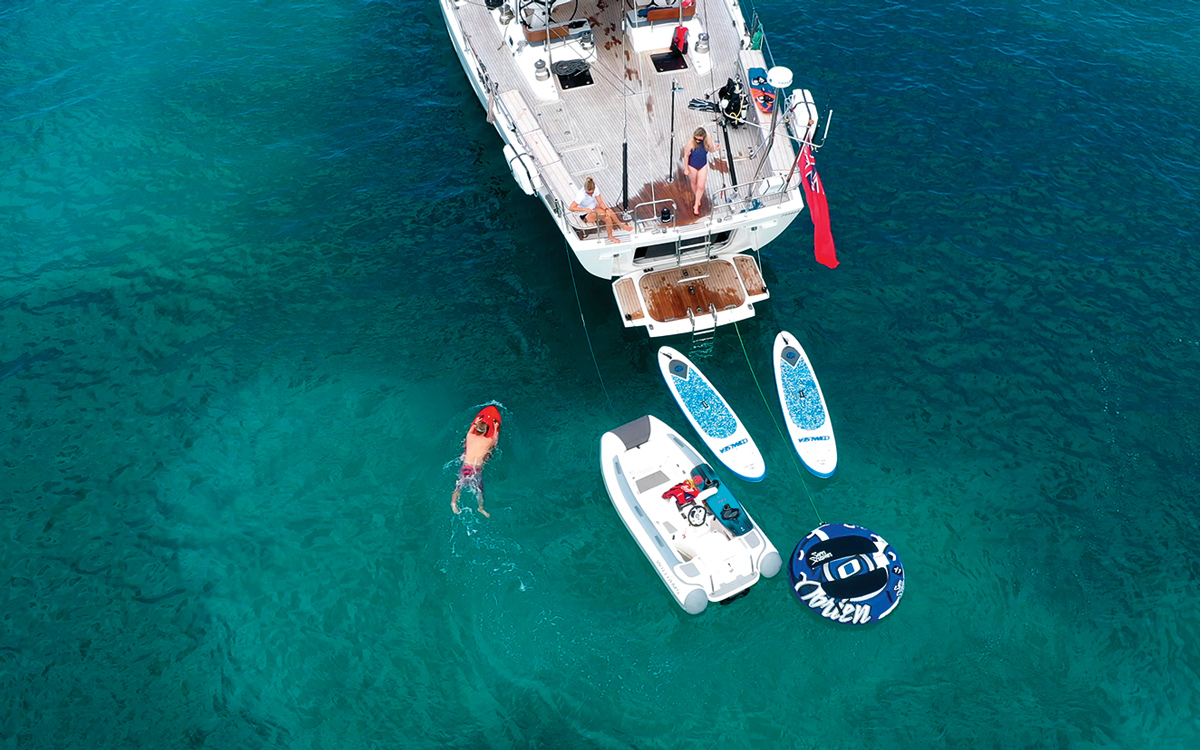 Water toys include a Williams jet tender, Seabob, paddleboards and inflatables, as well as a dive compressor and scuba gear. Photo: oysterluxurycharters.co.uk

“The rebuild is three times bigger than the biggest project we’ve ever done before. It has cost us millions of pounds but it is built as a commercial boat to take charterers, mainly motorboaters who want to sail in luxury.

“So many people said it couldn’t be done and that for me was the main driving force. I knew it could be done but it did write off a whole year of my life,” concedes Nick, “I didn’t have a day off and I was working from 0600 until late every night.”

Was it worth it? “I felt this boat deserved a second chance; it was so sad to see it in that state. I couldn’t bring myself to cut the boat up, which many people wanted to do. Many people wanted the boat destroyed, but we took it on ourselves to repair it – anything’s possible if you surround yourself with the right people. We’ve got the right people and we brought this boat back to life. We are very proud of what we have done.”

As for the Atlantic crossing, did it convert non-yachtsman Barke to the joys of life under sail? “The endgame was being able to sail the Atlantic. I had not sailed at all before this; I did enjoy it.” But, he admits, it was rather rolly, “so I wouldn’t be in a hurry to do it again for a year or two!”