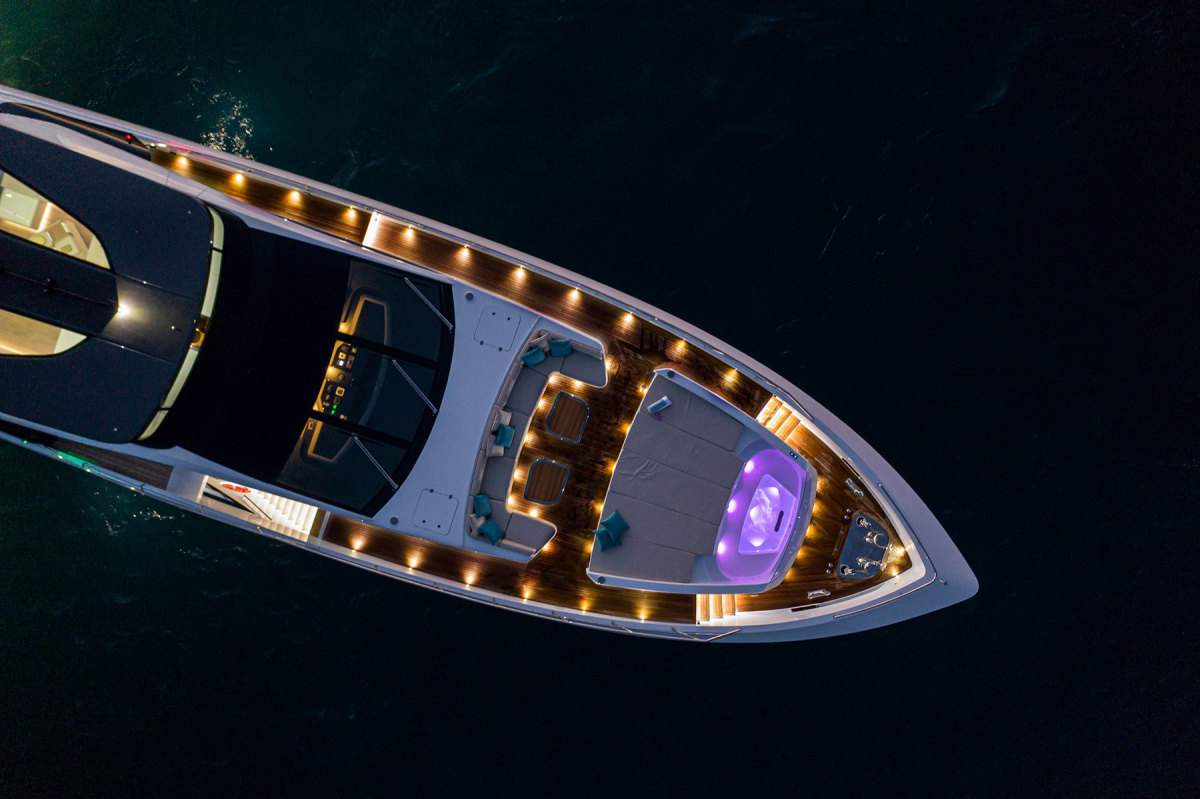 The Italian brand Mangusta made its bones with its fast Maxi Open line, and today has two other lines: the long-range Oceano and the GranSport, which combines rollicking performance with cushy interiors. The 109-foot (33.3-meter) Mangusta GranSport 33 is the baby in that line, and it packs a walloping punch, with a reported top speed of 26 knots and a cruise speed of 21 knots. The range, according to Mangusta, is 330 nautical miles, enough to cruise from Mallorca, Spain, to Sardinia, Italy, on one tank with fuel to spare.

Hull No. 1 of the Mangusta GranSport 33 is expected to reside in South Florida with an owner who often cruises with his family, which includes a gaggle of grandchildren. Shiny surfaces in the interior were a big no-no, since they’d create eyesores (not to mention headaches for the crew) constantly scarred with fingerprints. Thus, most hard surfaces on board have matte finishes.

Similar considerations went into the interior fabrics, which are stain-resistant. And in the garage, personal watercraft were eschewed for Seabobs, which the owner deemed safer. The garage also houses a Williams Dieseljet 505, though it’s big enough to hold a 565.

The main reason the garage has so much space is because this Mangusta GranSport 33 is the first the builder ever constructed with pods: quad 1,000-horsepower Volvo Penta IPS1350s. The engines freed up space in the 33’s accommodations, too. Mangusta says the master stateroom is the largest on any yacht in this size range. It has an island king berth and a head with his-and-her sinks split by a shower with nearly 8 feet of headroom, and an electrically fogging window for privacy.

Belowdecks are four guest staterooms: mirroring guests forward that can sleep a total of six grandkids with Pullman berths, and mirroring VIPs with king berths and hull-side windows at amidships, separated by a companionway that houses an extra refrigerator and a combination washer/dryer.

Outdoor entertaining spaces include two hot tubs—one in the bow area and another aft on the flybridge. The bow space also has lounges and a sunpad for five people (a signature element of the Mangusta GranSport line). Custom stainless steel gates cordon it off to keep the grandchildren safe underway.

The flybridge hot tub was built for them with an enclosed forward section. A custom champagne bar is along the forward edge of the tub. Thus, the kids can indulge in a bubbly dip while the parents keep a close eye with a bubbly sip.

The builder called upon Monte Carlo-based yacht designer Alberto Mancini to pen theMangusta GranSport’s exterior and some of her interior touches. Mancini retained Mangusta’s iconic, sleek look, matching a nearly straight sheerline with superstructure lines that run parallel to it. The black hardtop all but fades away to the eye, while the steeply raked windshield gives a sense of speed. When drawing the Mangusta GranSport 33, Mancini envisioned the yard’s traditional black-and-white color scheme. The result is a yacht that presents as minimalist, but is far from it. —K.K