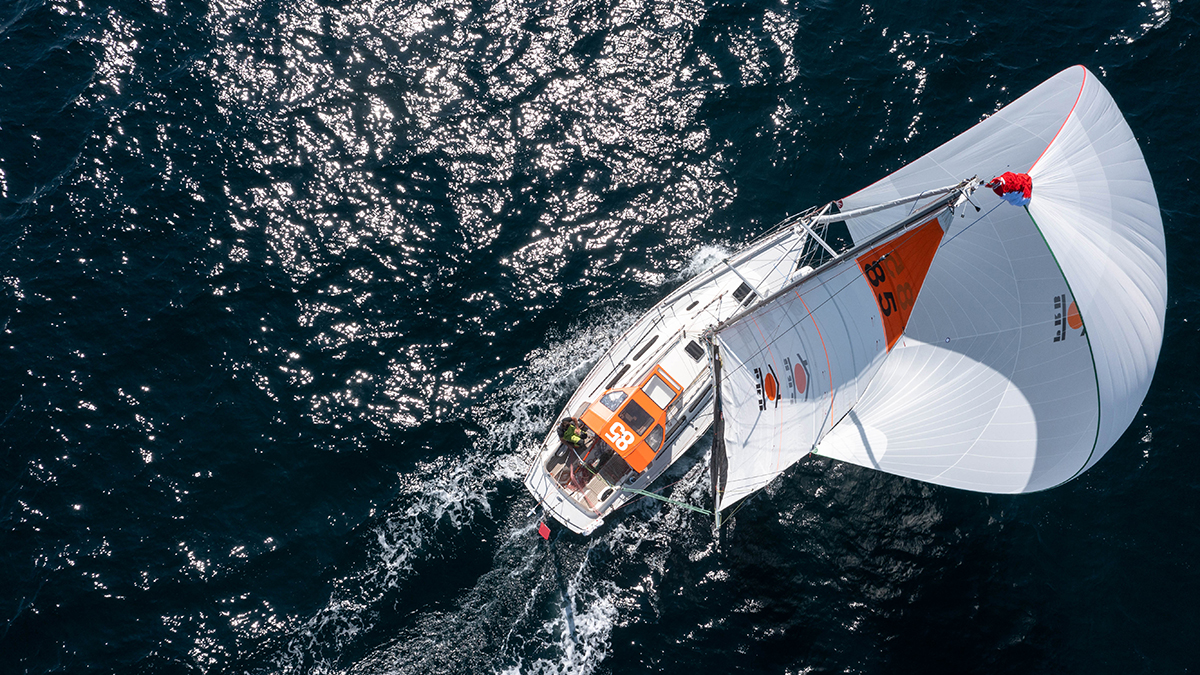 The 2022 Golden Globe Race, the ‘retro’ race inspired by the first non-stop solo around the world race in 1968, set off for its second modern-day running today.

Sixteen sailors – 15 men, and one woman – started from Les Sables d’Olonne today, on the 2022 Golden Globe Race, the ‘retro’ non-stop solo circumnavigation that is expected to take up to 9 months.

The Golden Globe Race, which eschews modern technology, sees the skippers competing on ‘vintage’ production yachts, with no regular access to modern communication or navigation systems, making it one of the most isolated sporting events in the world.

The fleet departed western France today in sun and light winds, however, a north Atlantic low is soon expected to bring stronger headwinds.

Meteorologist Christian Dumard explains: “After a start in good conditions, the depression located to the west of the Celtic Sea will bring sustained winds from the south-west. It will be followed at the end of next week by the remnants of Cyclone Danielle, which formed in the middle of the Atlantic. It is therefore in a dominant south-west to west flow that the competitors will sail to Cape Finisterre, then probably to the latitude of Lisbon. A sea state will build with waves that could reach 4 meters. Skippers hopefully will then be able to hook into the Portuguese trade winds, these famous northerlies, which will allow them to sail downwind towards the Canary Islands and the Cape Verde Archipelago.”

A split is expected to form in the fleet, with those confident to push themselves and their yachts in the opening days expected to head west for stronger breezes, while those seeking milder but more uncertain weather are likely to hug the Spanish coast. 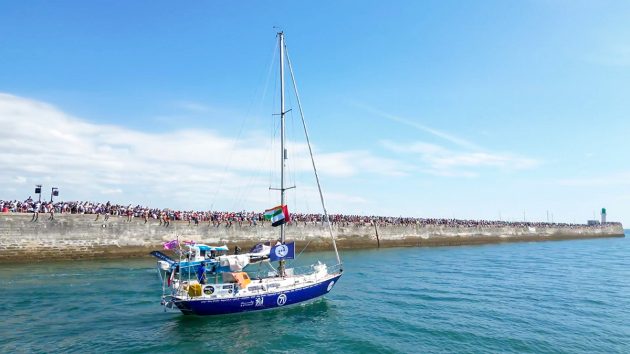 The entry list is varied, with a wide range of nationalities, motives and sailing experience across the fleet.

It includes four returning skippers. Finnish skipper Tapio Lehtinen is the only sailor to have completed the Golden Globe Race in 2018/19 who is entering for a second time. He finished as the 5th and final entrant to complete the course non-stop, despite extensive barnacle growth slowing his progress to a crawl. He returns with the same yacht, but a – hopefully – greatly improved antifoul protection.

Australian Mark Sinclair, known as ‘Captain Coconut’ also returns. Sinclair completed his circumnavigation after initially putting into Adelaide in 2018, then restarting in order to enter the 2022 race. He endured severe weatehr on the return leg both rounding Cape Horn, and crossing Biscay, and was in a race against time to prepare his Lello 34 to be ready for his second race start.

Ertan Beskardes is another returner, having set off in 2018 but retired early feeling unprepared. While Indian sailor Abhilash Tomy is one of the most famous skippers in the fleet, having been dramatically rescued after being knocked down, dismasted, and badly injured in the 2018 race. After undergoing spinal surgery, he’s re-entered with a Rustler 36. 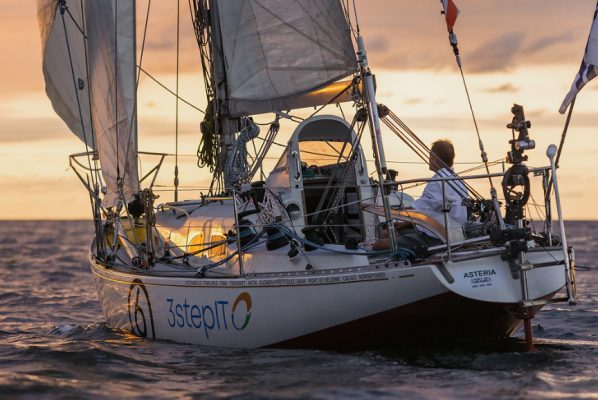 Rustler 36s dominated the last race, with the first four finishers all the British classic design. This year four more Rustlers will be competing, including one of the likely favourites, Damien Gillou’s PRB. Gillou is a well known ocean racer and boat captain who has meticulously prepared many IMOCA 60s and grand prix race boats, and his PRB is a stunning example of how to bring a production cruising yacht up to racing specification.

Other highly fancied entrants include Simon Curwen, a British sailor who partly lives in France, and also holds the record for the best Mini Transat result scored by a British solo sailor when he finished 2nd in 2001 to none other than Yannick Bestaven, the winner of the most recent Vendée Globe.

Kirsten Neuschäfer is the sole female skipper in this year’s race and was the skipper many of her competitors named as looking fast on the water in her Cape George 36 cutter. Neuschäfer has worked with Skip Novak on expedition sails, so is well versed in both sailing in, and preparing a yacht for, the Southern Ocean. 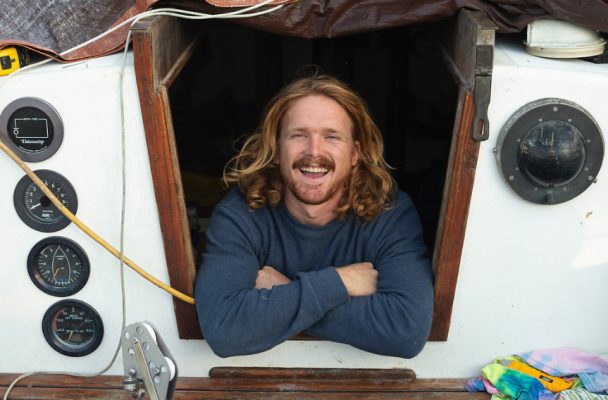 Every skipper has a unique story to tell. Pat Lawless is following in his father’s footsteps, after he was the first Irishman to sail solo around the world, aged 70. Guy Waites is returning to solo racing, having competed in the Jester Challenge in a Contessa 26 10 years ago, then taking part in two Clipper Round the World Races, as first mate and skipper. American sailor Guy de Boer campaigned in Olympic classes, but has yet to cross an ocean solo, while his  compatriot Elliot Smith is the youngest entrant, aged 27.

For the second running of the race there have been some significant changes. The start date has moved from early July to September, in order to ensure the fleet do not arrive in the south in mid-winter, and also that those that make the return passage across Biscay avoid the European winter storms.

There are also more compulsory marks of the course – including rounding the Brazilian island of Trinidade to port, and ‘film drop’ gates at the Canary Islands, Cape Town, Tasmania, and Punta del Este – which remove many of the tactical choices of the race.

Some skippers voiced concerns the the new route could make it something of a drag race, others that navigating closer to shore – and shipping – for the film drop gates by sextant without GPS or chart plotters could potentially be dangerous. However, organisers will be keen to avoid a repeat of 2018 which saw four boats abandoned during challenging rescues.

There have also been changes to the technology allowed – which this year includes weather fax. However, skippers’ only means of communication is via HF Single Side Band (SSB) Radio. They may monitor HAM radio, but are not allowed to transmit (an effort to avoid sone of the controversy of the last race). They may hail fellow competitors or other vessels for information, but otherwise are limited to what they can deduce from sextants, barometers, and weather fax.

Damien Guillou, Simon Curwen and Kirsten Neuschäfer took the early lead – you can follow the fleet at goldenglobe.com

We’ll be running regular updates on the fleet’s progress, while our sister title Yachting Monthly has skipper profiles of every entrant.