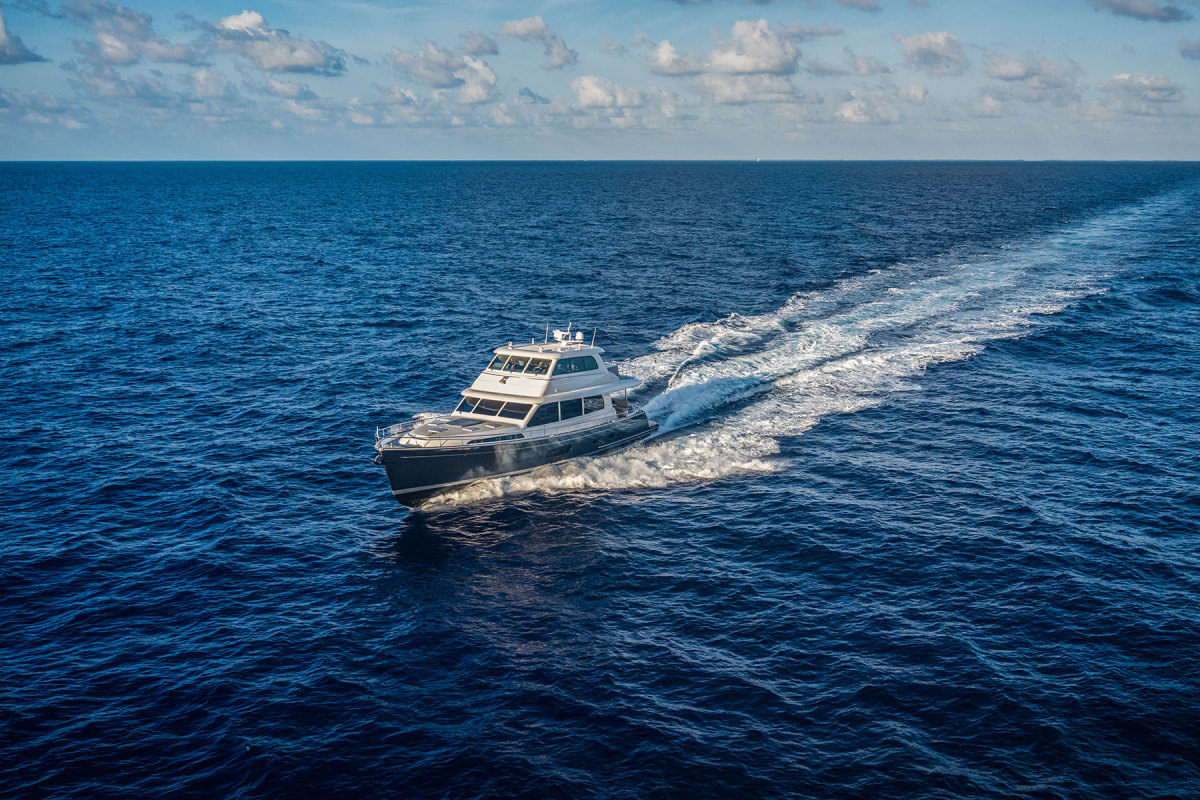 Like the Grand Banks 60 that made its debut in 2017, the new Grand Banks 85 is a groundbreaking design. It’s also the new flagship model for the brand under the tutelage of CEO Mark Richards, whose charge after taking the reins in 2014 was to bring the 65-year-old builder to a new level in appearance, performance and construction.

The GB 85 premiered at the Palm Beach International Boat Show in March with a style that blends the familiar with a conservative, yet near-endless array of shapes, curves and detailing. This yacht is eye-catching with practical cruising appeal.

That cruising appeal comes in part from the boat’s warped hull design. Boatbuilders often say performance is solely related to horsepower and weight, but Richards’ decades-long sailboat-racing career taught him that a winning design relied on the boat’s wetted surface, reducing the energy needed to move the boat through the water and its running attitude. Hence the V-Warp hull on the Grand Banks 60 and, after tank testing at the Australian Maritime College, on the Grand Banks 85 as well.

I verified the performance after meeting Richards and his crew in Fort Lauderdale, Fla., as they returned from a trip to the Bahamas and Florida Keys. Just outside Port Everglades Inlet, Richards left me the wheel, and I ran the boat 70 miles north to the St. Lucie Inlet sea buoy. Moving through the water, the running surface was slick as an eel. There was minimal bow rise, and the hull sliced effortlessly. The running angle averaged about 2 degrees through the boat’s entire propulsion range, which means little energy is wasted while maximum power is delivered for performance and efficiency.

The cruising appeal comes in part from the boat’s warped hull design. Boatbuilders often say performance is solely related to horsepower and weight, but Mark Richards’ decades-long sailboat-racing career taught him that a winning design relied on the boat’s wetted surface, which reduced the energy needed to move the boat through the water and its running attitude.

Richards says the next two 85s will have 1,300-hp MAN diesels matched to V-drives, but her center of gravity should remain constant with the boat’s 8-degree shaft angle and the single main fiberglass fuel tank sandwiched between the master stateroom and crew quarters.

Visibility was superb thanks to the three-panel windshield, and the drop-down side and aft windows in the enclosed Skylounge bridge (the 85 is also available with an open flybridge). And even with the carbon-fiber sunroof partially open, along with the side and after bulkhead windows open, the ride stayed limousine-quiet. I only used the Garmin autopilot for about 20 minutes and instead steered the rest of the way. This is a fun, well-mannered boat to handle.

Although sea conditions were calm, I managed to carve through a number of big sportfish wakes, which the yacht virtually ignored while spray stayed in the ocean. The boat should handle sloppy seas equally well with its Humphree stabilizer fins. A Seakeeper gyrostabilizer is an option.

The Skylounge layout utilizes most of the 22-foot, 2-inch beam. There is seating for three in the helm area, two steps above the carpeted sole. Abaft the helm, an L-shape lounge and cocktail table are opposite a Silestone counter that holds a stainless-steel sink, refrigerator, dishwasher and Jura coffee machine. A teak door leads outside to another service area with a Kenyon electric grill, a second refrigerator and an ice maker. The hardtop overhang partially covers a lounge and teak dining table. The 2½-inch toerail and a polished, 29-inch-high, stainless-steel rail provide security on the outside deck.

From the upper deck, wide teak steps with a nonslip finish and husky teak grab rails lead below to a foyer with a door to port. To starboard is the galley, also with a door to the deck, as well as a set of recessed controls to assist with docking. The galley is well-lighted from the windshield, and a teak dining table abaft the galley seats six, opposite a console with a wine chiller and stowage for bottles and glasses. A full wall separates the galley from the dining area, a customization on Hull No. 1.

In the salon are a U-shape settee and additional seating options to port. Natural light accents the generous amount of hand-finished teak joinery throughout the interior, which I found to be flawless.

From the salon, a teak door accesses the teak-planked aft deck, which has fender stowage, an electric grill, a bar, a sink, a refrigerator and an ice maker. The upper-deck overhang shields a teak table and settee for eight. Flanking teak steps access the 7-foot-long lower transom platform, which is home to a passarelle, integral swim ladder and inflatable tender with an outboard motor.

For the accommodations level, owners can choose three staterooms with a full-beam master and his-and-her head, or four staterooms and four heads. Grand Banks offers custom options too; on Hull No. 1, they include a full-size piano-style keyboard in the master stateroom.

Crew quarters are aft with port and starboard cabins, a galley, a lounge, a settee, a laundry center and a dedicated switchboard to access and monitor ship’s systems. A lazarette on centerline holds kayaks, dive gear and other toys. The enignes are located in separate, well-insulated compartments, sharing space with a Fischer Panda generator, batteries and fuel filters.

Other mechanical, electrical and plumbing systems, including the chilled-water air conditioning, are in a separate and well-lighted area below the companionway sole—a location that makes them easier to service without the need for toiling in a hot engine room.

According to Richards, Grand Banks racked up 140,000 labor-hours to build the first boat, whose custom features also include electrical systems the owner wants for cruising worldwide. There’s teak planking in the engine rooms and machinery work areas, too.

The vacuum-infused hull with E-glass and carbon fiber in strategic structural areas is cored with foam composites, and stitched multiaxial fabrics and vinylester resins. Her deck and superstructure components also are fully infused with carbon fiber. Bulkheads, including the collision bulkhead in the bow, and fixed stateroom furniture is structurally bonded to the hull and deck, which is one reason the interior is so quiet in a seaway. The hull-to-deck joint is laminated and mechanically fastened. The composite toerail glows with a metallic finish, and nonslip Awlgrip is on the cabin tops and walking surfaces.

The line of long-range vessels that Grand Banks has splashed in the past five years bears little physical resemblance to the models that captured the hearts and minds of many a trawler accolade decades ago. Even so, this builder is improving on an iconic product. The Grand Banks 85 is the pinnacle of this effort, honoring tradition while keeping an eye on the future.

This article was originally published in the July/August 2022 issue of Passagemaker.