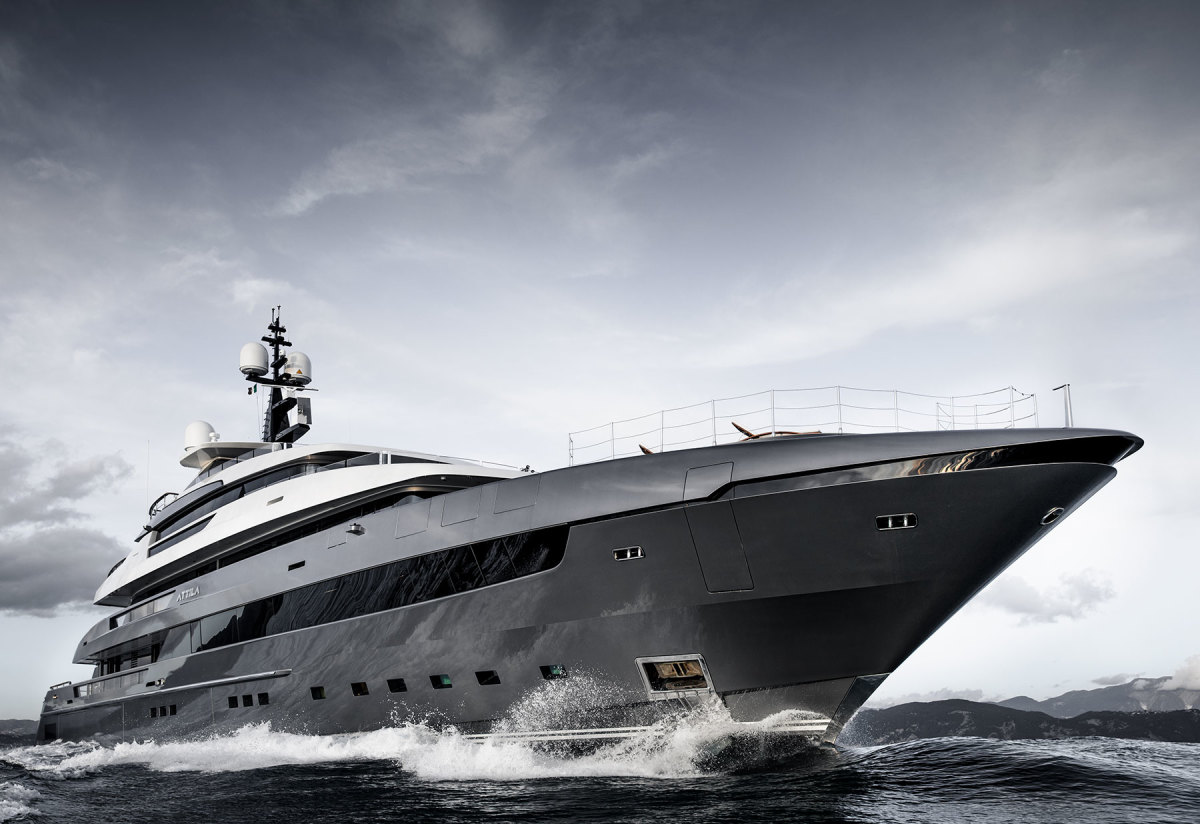 Building a yacht is a business proposition, and it’s difficult to make friends in business.

So says the Argentinian owner of the 210-foot (64-meter) Attila, the first 64Steel from Sanlorenzo and its executive chairman, Massimo Perotti.

“But it’s also a question of trust, and I’ve known Massimo for years, having built my previous boat with him,” Attila’s owner says. “So the trust was already there, and I knew he could build me a beautiful boat.”

It wasn’t a foregone conclusion, however, that Sanlorenzo could deliver. The Italian shipyard is a relative newcomer to metal boatbuilding, having launched its first 40Alloy in 2007. Sanlorenzo has since sold more than three dozen steel- or aluminum-hulled yachts, but Attila is easily its biggest project to date and one of the highest-volume yachts in her class.

“At 1,600 gross tons, Attila is three times the volume of the 52Steel and 400 gross tons more than the 62Steel, her smaller cousin,” says Antonio Santella, vice president of sales and marketing at Sanlorenzo’s superyacht division. “Building over 500 gross tons brings with it more complex regulations and management challenges, but we have both the technical and production knowledge, and it’s something we’ve been moving towards.”

The owner’s motive to build bigger was based on his previous experience aboard his 46Steel, Achille. He wanted a private owner’s deck and a full beach club, but was aware that having more than three decks on a yacht under 500 gross tons could lead to stability issues. Smaller boats with beach clubs closer to the water are prone to flooding if a boat comes off plane nearby.

Attila’s enormous beach club, equipped with a gym, steam bath and sauna, covers an area of nearly 840 square feet (78 square meters) when the transom and side platforms are deployed. It connects via a marble-clad double staircase to a part of the salon that Santella calls the “alfresco veranda.” There are three pools on board, and the largest on the main deck aft has a glass bottom to illuminate the beach club below.

“The rationale behind the layout was to integrate the main deck aft and beach club as much as possible,” Santella says. “Hence the interior access to the beach club, and teak decking in the dining area that blurs the boundary between inside and outside. There’s no doubt the social life on board revolves around these two areas.”

A key feature and an early owner’s request is the custom-made barbecue pit in the main deck dining area, for rustling up Argentinian-style steaks. Clearly, cooking inside on an open flame presents a safety risk, so the stainless-steel installation is fitted with its own smoke extraction system and had to meet the same fire rating as the galley.

Forward of the dining area is a lounge that doubles as a cinema room, with a projector screen that hinges down from the ceiling, effectively doing away with the conventional formal dining room.

“Formal dining rooms on yachts are a waste of space because they are hardly ever used,” the owner says. “Instead, on Attila, we can go straight from the pool to the dining area and enjoy an asado all together as a family, without worrying about sitting around in damp swimming costumes. If the adults want something a bit more formal in the evenings, we can use the lounge and dining room on the bridge deck, or even the sundeck.”

Having an owner’s deck meant that all four guest staterooms and the full-beam VIP stateroom could be relocated to the main deck, to make best use of the yacht’s 43-foot (13.1-meter) beam and larger windows. The lower deck is freed up for the crew’s quarters and a Zanussi-equipped galley complete with a pizza oven, as well as two side-loading garages amidships for a 33-foot (10-meter) VanDutch limo tender and a 26-foot (8-meter) sports tender.

On the under-lower deck is climate-controlled “wine cave” for 500 wine bottles, walk-in cold storage (including a marble-lined meat store), a refrigerated garbage room, laundry and a crew media room. The crew mess is opposite the galley, and a shell door and service lift mean cold and dry provisions can be quickly transferred to stowage on the deck below.

Because of her size, Attila is likely to be anchored offshore more often than moored in marinas, a fact that suits her owner, who is looking to spend as much time on board with friends and family as his business commitments permit.

‘I much prefer to stay on board in a quiet bay somewhere, and I’ve never understood why owners rush ashore as soon as they’ve dropped anchor.’ — owner of Attila

“I much prefer to stay on board in a quiet bay somewhere, and I’ve never understood why owners rush ashore as soon as they’ve dropped anchor—although I should add that my wife likes to shop,” he says. “Attila isn’t the kind of yacht you use for just a couple of weeks in the summer. If that was the case, I would charter her.”

The exterior lines by Officina Italiana Design retain Sanlorenzo’s signature style, which is heightened by metallic gray and pearlescent white paintwork. Considering that Attila’s interior volume is more typical of a yacht 30 feet longer, her profile on the water is pleasingly poised and graceful with none of the wedding-cake look of many other high-volume yachts.

The interior styling by Francesco Paszkowski in collaboration with Margherita Casprini, which the designers describe as modern South American, draws on a palette of natural materials such as teak, nabuk leather and six varieties of marble for a soberly sophisticated ambience. The freestanding furniture is by Italian designer labels such as Minotti and Baxter. Calm and warmly welcoming, the interior décor is punctuated with eclectic artworks such as the golden sculpture of a thoughtful-looking gorilla staring out from his alcove in the upper deck salon.

The 64Steel platform is designed to be stretched, and the Sanlorenzo facility in La Spezia, Italy, has a capacity to build yachts that are well over 330 feet (100 meters). But Santella maintains the brand has no intention of going beyond 230 feet (70 meters)—and not just because of stiff competition from rivals.

“The bigger you build, the more variables you introduce into the equation,” he says. “Our philosophy to date has been to produce customizable yachts based on fixed technical platforms in order to control time, quality and cost. Once you go over 70 meters or so, it becomes much harder to maintain that control.”

It appears that the owner of Attila has reached the limit of his aspirations as well.

“Sixty-four meters is perfect for my needs,” he says. “Up to that size is a pleasure; any bigger and it gets more difficult to manage and can become more of a pain than a pleasure.”

Then again, he wouldn’t be the first owner to change his mind.