The beauty of asymmetric sails is that they are very simple to trim. There’s no spinnaker pole to worry about, just a bowsprit and a simple gennaker to play with. However, there are still plenty of subtleties to get the best out of your A-sail. Stu Bithell knows how to make asymmetric boats go faster than most, with experience ranging from the 49er skiff up to large keelboats.

The simplicity of the gennaker is also one of its limitations, because asymmetrics tend to have a narrower ‘sweet spot’ compared with a conventional spinnaker where the pole can be laid forward for a tight reach or pulled aft for a run. So there are some interesting tactical considerations to bring into play, as Stu explains.

One of the big factors in asymmetric racing is knowing when to take the high road or the low road, especially in moderate ‘crossover’ conditions.

In lightweight, dynamic skiffs like the 49er, you’re pushing the tiller away and looking to really build the apparent wind over the gennaker from quite early on in the wind range. But in a heavier boat like a J/70 or SB20, you don’t always get that instant feedback.

If you’re not careful, you can end up sailing extra distance for not much extra speed gain. And tactically it can leave you exposed because any boats that hoisted behind you on starboard gybe and soaked in low mode will now have rights on you when you look to gybe on to port.

So if in doubt, going low is tactically generally the safer option. But if you reckon someone is making better VMG in another mode, then be prepared to change your mode too.

If you’re way back in the fleet, gybing away from the pack and going for a fast mode can be a great way to make up lost ground while everyone is fighting with each other in low mode. 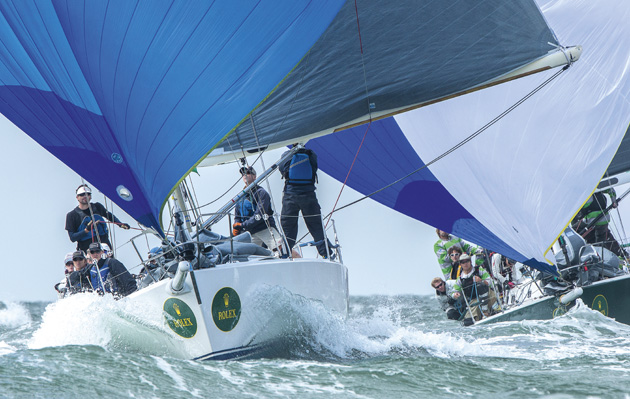 “Are we in on this gybe?” is often a tricky question to answer when you are far from the leeward… 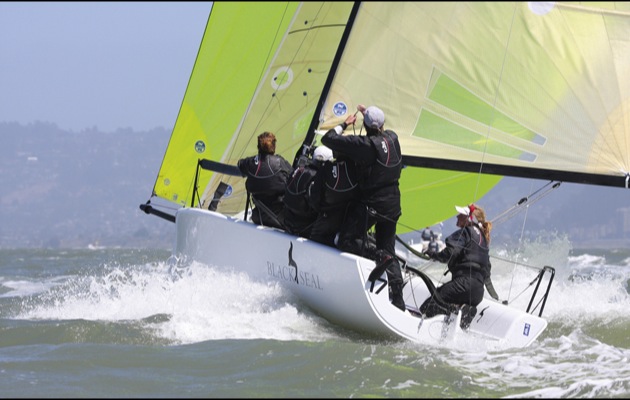 You’re blasting downhill on port with the big asymmetric set, searching for a fast route over the next set of…

If you’re pushing to get as low as possible, then communication between the gennaker trimmer and helmsman needs to be spot on. The trimmer can feel when there’s enough pressure in the kite through the tension in the sheet.

Especially in light winds, keep up constant comms, letting the helmsman know whether they can soak any lower, or if you need them to push up a bit higher to get some air back across the gennaker.

3. Set up for an early drop

Because you’re doing bigger angles on an asymmetric compared with other types of boat, your approach to a leeward mark or gate becomes even more critical.

Going dead downwind with a gennaker is dead slow. I’ve seen people goosewinging the gennaker out to the opposite side of the mainsail on the J/70, which is a good short-term tactical move for positioning yourself on the inside of a rounding. But your thoughts about what kind of rounding you want to make need to start a lot further back up the run.

A strong approach into the leeward gate is to come in towards the left-hand mark (as you’re looking at it downwind) slightly heated up on starboard gybe. This gives you starboard rights and inside rounding rights at the mark.

Sometimes with fast asymmetrics you need to be prepared to take the throttle off. Basically the gennaker sheet is your downwind throttle.

For maximum speed, most of the time you’re trimming the luff so that it’s curling nicely. In the 49er and other fast skiffs, there’s a risk of pitchpoling if you plough into the back of a wave at full pelt, so in extreme conditions we’ll oversheet the gennaker to choke the efficiency out of it and slow the boat down so that we’re not overtaking the waves too quickly.

Playing the throttle is a useful tool when you find yourself on a collision course downwind with a boat on starboard gybe. If you want to stay on port, rather than being forced into a gybe by the other boat, oversheet the gennaker and take the speed right off the boat, letting the starboard boat pass in front of you as you ease the sheet again for maximum speed.

The more apparent wind you’re generating, the closer in you need to sheet your mainsail. A good rule of thumb for the mainsail trimmer is to watch the mainsail luff and sheet in until any backwinding disappears.

Keelboats also seem to like a mainsail that matches the profile of the gennaker leech, so it can be good to try a fairly loose vang, sheeting the boom quite close to the centre and with lots of leech twist. 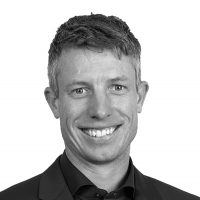 Stu Bithell won an Olympic silver medal at the London 2012 Games in the 470. He’s currently competing for Great Britain on the foiling catamaran SailGP circuit and, having won the 2017 World and European Championships, is bidding for another Olympic medal next year in Tokyo, this time in the 49er.

Spotlight – Ragnar: A Voyage into Valhalla

Spotlight – Ragnar: A Voyage into Valhalla