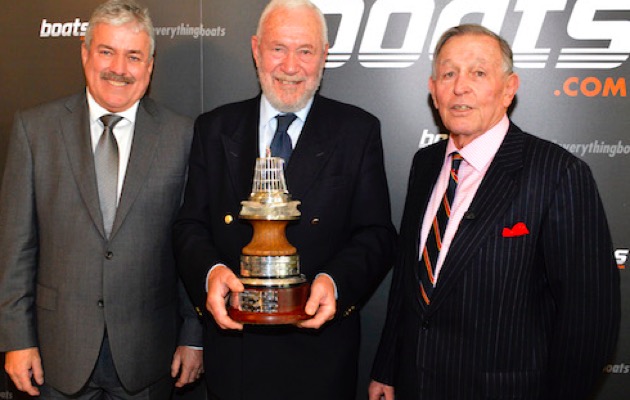 Bob Fisher, one of sailing’s great storytellers – both in print and in person – has passed away.

The sailing world has lost one of its great characters as it was announced on Monday 25th January that yachting journalist Bob Fisher has passed away at the age of 85.

The news was posted on Facebook by Bob Fisher’s daughter Alice, who wrote: “It is with such sadness that Dee, Alice and Carolyne have to convey the passing of our fantastic, unique and extraordinary husband and father Bob.

Bob was one of the greats of the yachting world and peerless as a sailing journalist. His writing stretched back well over half a century, regularly contributing to sailing magazines (including a period of writing for Yachting World) since the 1960s, as well as covering major events for newspapers including the Guardian, and writing countless books.

Tributes have poured in from sailors across the globe. From New Zealand Sir Ben Ainslie tweeted: ‘Saddened to hear of the passing of Bob Fisher, whom many considered the doyen of yachting correspondents. He gave a huge amount to sailing through his passion for the sport#sailonBob’

Tracy Edwards OBE had a famous run-in with Fisher when she was putting together her all-female Whitbread campaign in 1989. ‘Bob penned one of the most infamous phrases about Maiden when he called us ‘A tin full of tarts!’,’ she recalled in a facebook tribute to the writer, ‘But what made Bob one of the greatest yachting journalists and unofficial caretaker of our sport, was his willingness to be persuaded when he maybe got it wrong. So, when Maiden won the third leg into NZ Bob was out on the water to welcome us in and the article he wrote was titled ‘Not just a tin full of tarts. A tin full of fast, smart tarts!’ We loved it. Bob then made it a point to support all the projects we did in, as always, well informed, beautifully written articles.

‘I know we will all remember Bob in different ways and we will celebrate his extraordinary and joyful life but today, for now, I am absolutely heartbroken and feel totally bereft at the loss of such a great and true friend and a giant among sailors and writers.  I will miss you so much Bob, it’s hard to put into words.  We will see you on the other side of the horizon.  Sail on.’

‘The Fish’, as he came to be known, was a raconteur who could be relied upon to enliven any social event with a cheeky comment, a broad smile (and often a drink in hand). His was also a larger than life presence in press offices around the world, and he was well-known for securing the best seat in each media room. That privilege was well earned, and no young reporter dared question it. Certainly not twice.

Equally fierce in his written opinions, Bob was both generous with praise and eviscerating in his criticism where he saw it to be deserved. He was, above all, passionate about the sport of sailing and communicating the stories of its characters.

Behind the roguish persona was a razor-sharp mind. An authority on many spectrums of the sport of sailing, including the Olympics and Whitbread/Volvo Ocean Race, Bob was particularly fervent in his enthusiasm for the America’s Cup, covering some 16 editions of the Auld Mug. His absolutely encyclopaedic knowledge of the event earned him the title of ‘Mr America’s Cup’ and his complete two-volume history of the event, An Absorbing Interest, remains the definitive volume on the subject.

Not only was Bob one of the great writers in the sailing world he was a remarkable talent on the water too. Since his early introduction to sailing in his hometown of Brightlingsea, UK, Bob remained an active sailor throughout his life, enjoying great success racing Hornet and Fireball dinghies and the local Brightlingsea One Design.

He went on to become a great proponent of catamaran racing in the UK. Crewing alongside fellow Brightlingsea boy (and later Tornado Gold medallist) Reg White, he won the World Sailing (back then IYRU) B-Class catamaran trials in the Tornado, which would award the boat International status and ultimately seal its position as an Olympic class. Not long after, Bob took part in, and won, the very first ‘Little America’s Cup’ raced in C-Class catamarans.

Aside from competing in dinghies and catamarans at the highest level, Bob Fisher was also a skilled yacht helmsman and navigator, who was invited to sail alongside many of the greats of our sport, as well as skippering his own yacht in many Solent regattas.

Bob Fisher was a great sailor, a great journalist and above all, a great deal of fun to be around. He will be sorely missed. Our thoughts are with his family and his many friends.