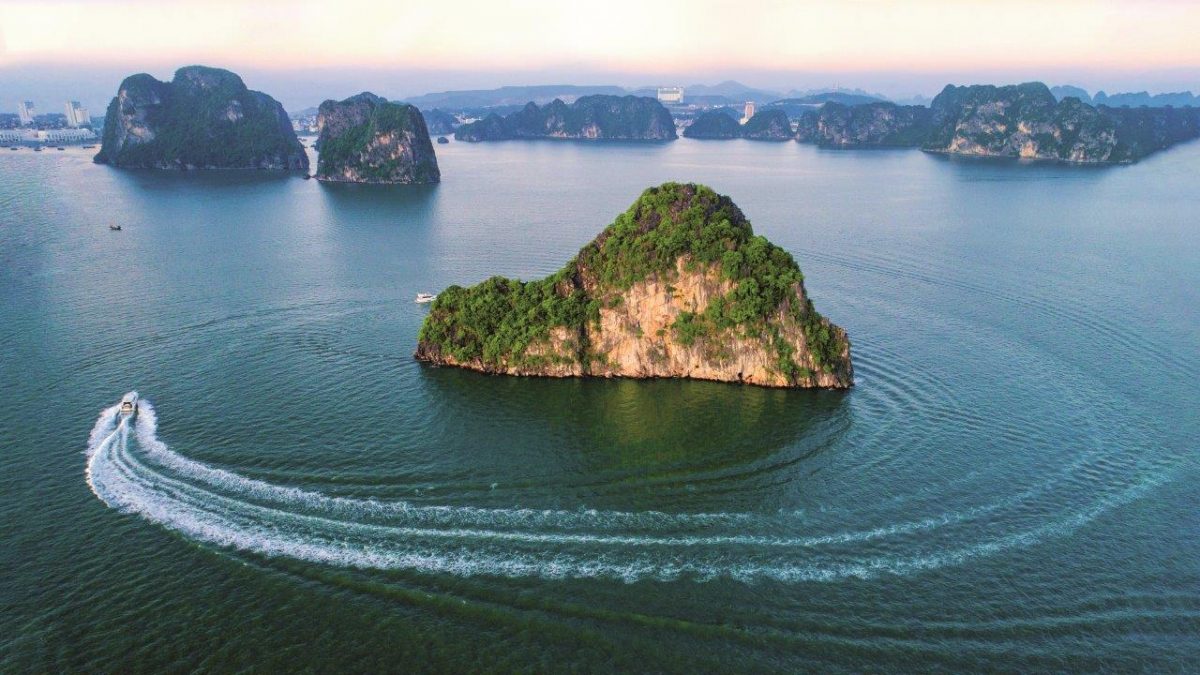 In just over a decade, the progress in the leisure-boating lifestyle has made significant inroads in Vietnam. This followed a period where purchases were often made between would-be owners and brokers or manufacturers based regionally, or potentially even further away.

One of the first private yachts imported into this new era was a Sunseeker 60 in 2007. However, with high taxes for private ownership – comprising a 30 per cent luxury goods levy for private ownership, up to 10 per cent import tax (depending on the place of origin for the purchase), and VAT of 10 per cent – alongside strict qualification requirements for captains, and a dearth in berths, the uptake has been slow.

But within this developing market, inroads are being made to bring international brands’ yachts to would-be owners and charter clients in Vietnam. Slowly but surely, marinas are being built, and boat shows are occasionally planned.

Read: Can Asia’s marina scene ever match the money? 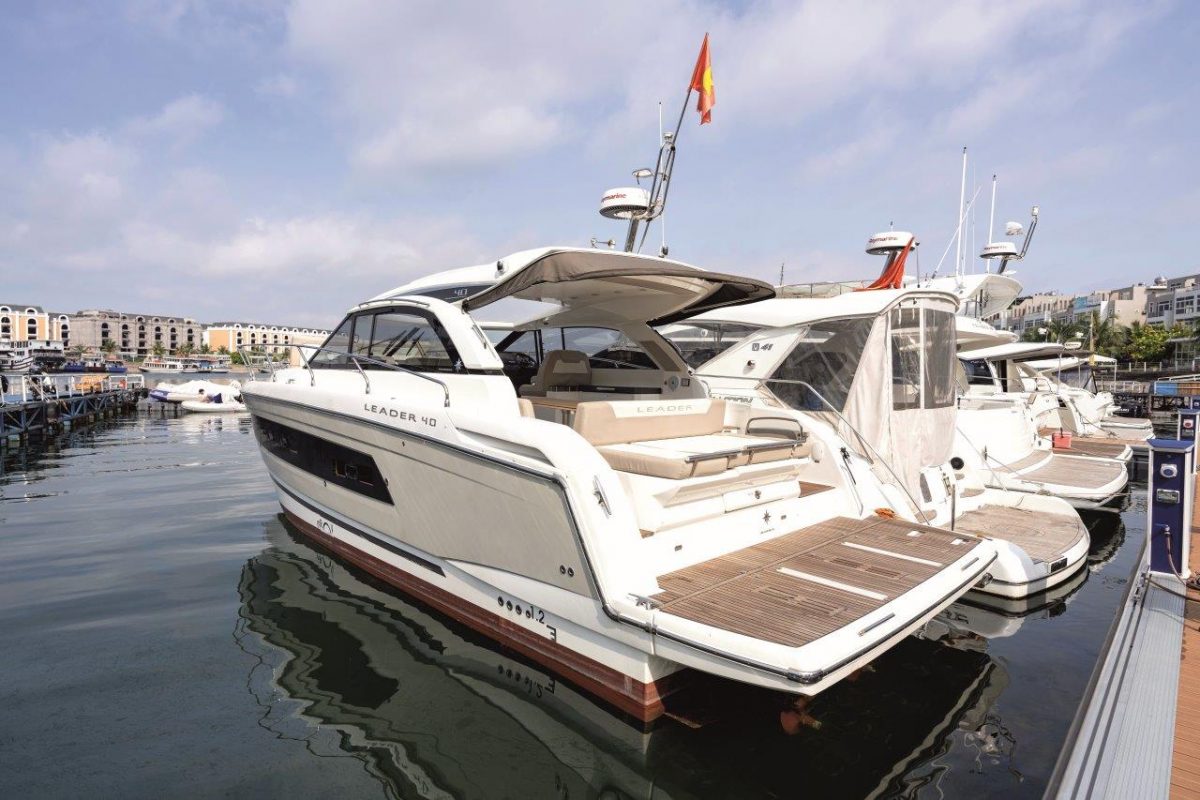 Vietyacht, established in 2015, has spent years conducting thorough research on the domestic yacht market needs and preferences. As a result, the firm swiftly developed a solid understanding of the brands already proving popular in Vietnam and the ones it felt would be suitable for owners there.

By 2017 Vietyacht became the country’s exclusive distributor for Jeanneau Yachts and Prestige motoryachts – both brands within the French Beneteau Group.

“We knew Vietnam had no real yacht market, so we knew we’d have to have to help make it” – Salem Huong, vice president, Vietyacht and chairwoman, Vietyacht Club

“From then, things moved on smoothly,” says Salem Huong, vice president & CMO of Vietyacht. “Right afterwards, a brand-new Leader 36 [Jeanneau motoryacht] was imported to Vietnam in August 2017, and Vietyacht prepared to set up a yacht club in Ha Long Bay.” 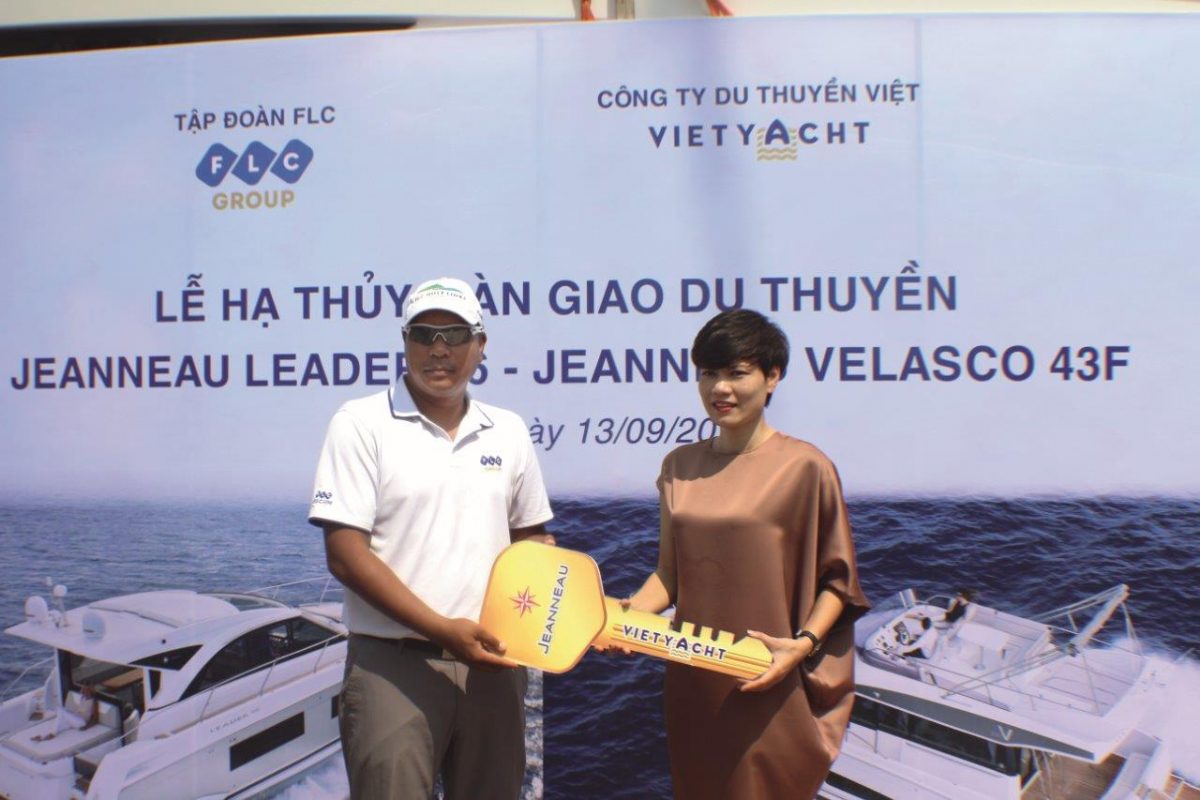 That busy year saw Vietyacht Club getting regular bookings for its three Jeanneau charter boats: a Leader 36, a Leader 40, and an NC14. And last year, Vietyacht became a national distributor for conventional-engine and electric Alfastreet Marine speedboats, from Slovenia.
“From our launch time, we have distributed 60 boats and yachts in Vietnam,” Huong said in August.

For her, maritime pursuits were inevitable. “I was born in the dormitory of the Shipbuilding school at The Central College of Transport No.2 in Haiphong,” she says. “My mother was a ship-engine teacher, and my father was a hull teacher. So when I was a toddler, I knew what the tides were like; I knew what it was to launch a ship. I lived happily and grew up in the midst of iron and steel, welding wires, oxygen tanks, grease; by 18, I’d witnessed the launch of no less than 200 ships of all kinds.”

After 10 years abroad at university and working, “the ocean called me back, and I worked for a logistics company which handled cargo – especially marine equipment, and this helped teach me more on how a vessel is built,” she continues. “Doing business in this field for a long time with Duc Thuan Nguyen – now the president of Vietyacht, we dreamed of opening our own company. We knew Vietnam had no real yacht market, so we knew we’d help make it.”

This year, Nguyen and Huong have written many of the country’s premier resorts and companies into their order book. Luxyacht saw a Ferretti 500 sold this year – to be delivered at the beginning of 2023. “On the delivery day, we will make a big event,” says Huong – maybe at the boat show we are planning for Vietyacht and LuxYacht. 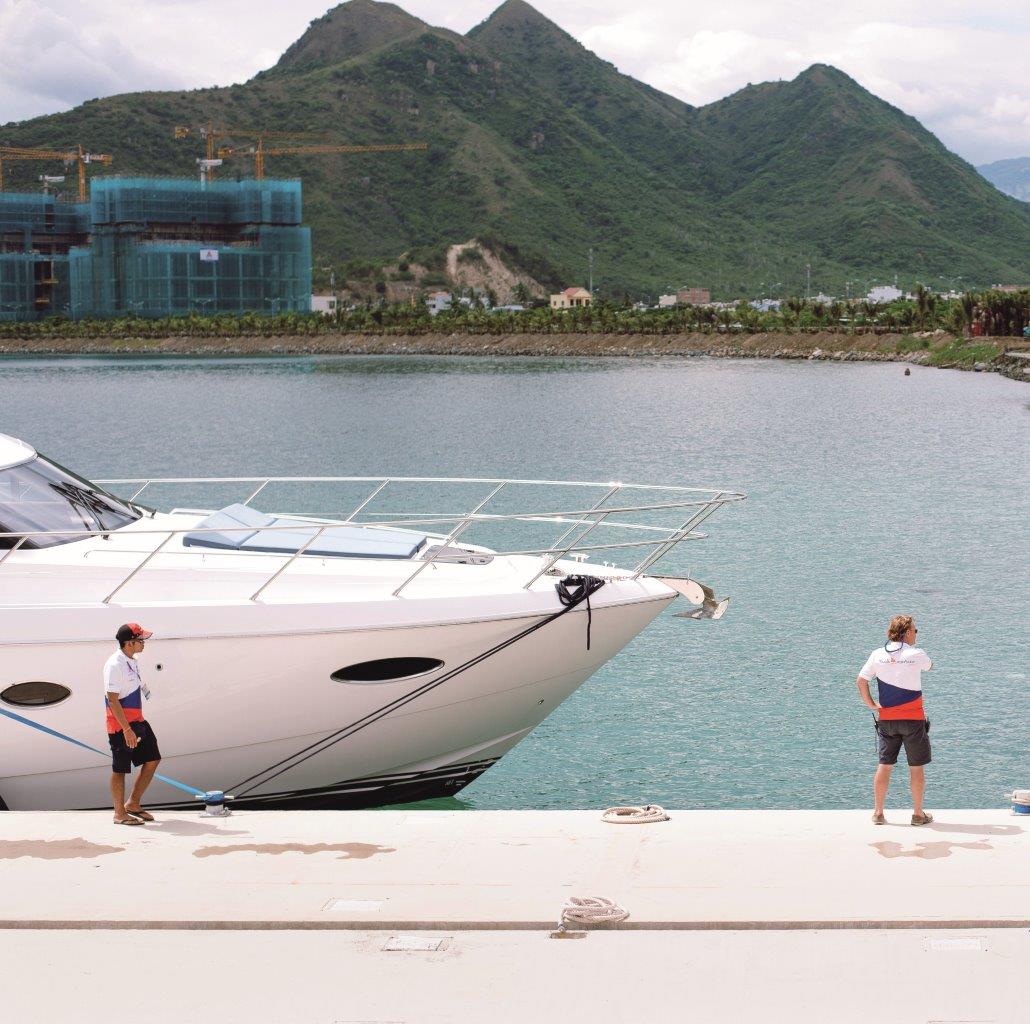 Ana Marina in Nha Trang under construction in 2017

Starting work in the country from the beginning of its pleasure-yachting era, native Dutchman Ruurd van Putten has been based in Nha Trang in the centre of Vietnam for 15 years. He is currently the owner and managing director of Anchor Management, which provides consultancy and management services for marinas, waterfront developments and sustainable solutions in Vietnam – and Southeast Asia. He is also a representative for Marinetek, which builds floating structures for marinas.

Van Putten has an excellent overview of Vietnam’s yachting progress, having spent a lot of time in various niche areas of it. He’s been a broker – including a period of establishing Princess Yachts in Vietnam (his last sale was an F62 in 2020) – worked in yacht management, and acted as an agent / trouble-shooter for visiting yachts.

He is also a consultant for pre-construction and the early-building period of marinas. Having worked as a captain and as a marina manager and broker at Huizer Marina in the Netherlands, Van Putten’s first forays in Vietnam were in the tourist and expat charter area and importing sailing boats. 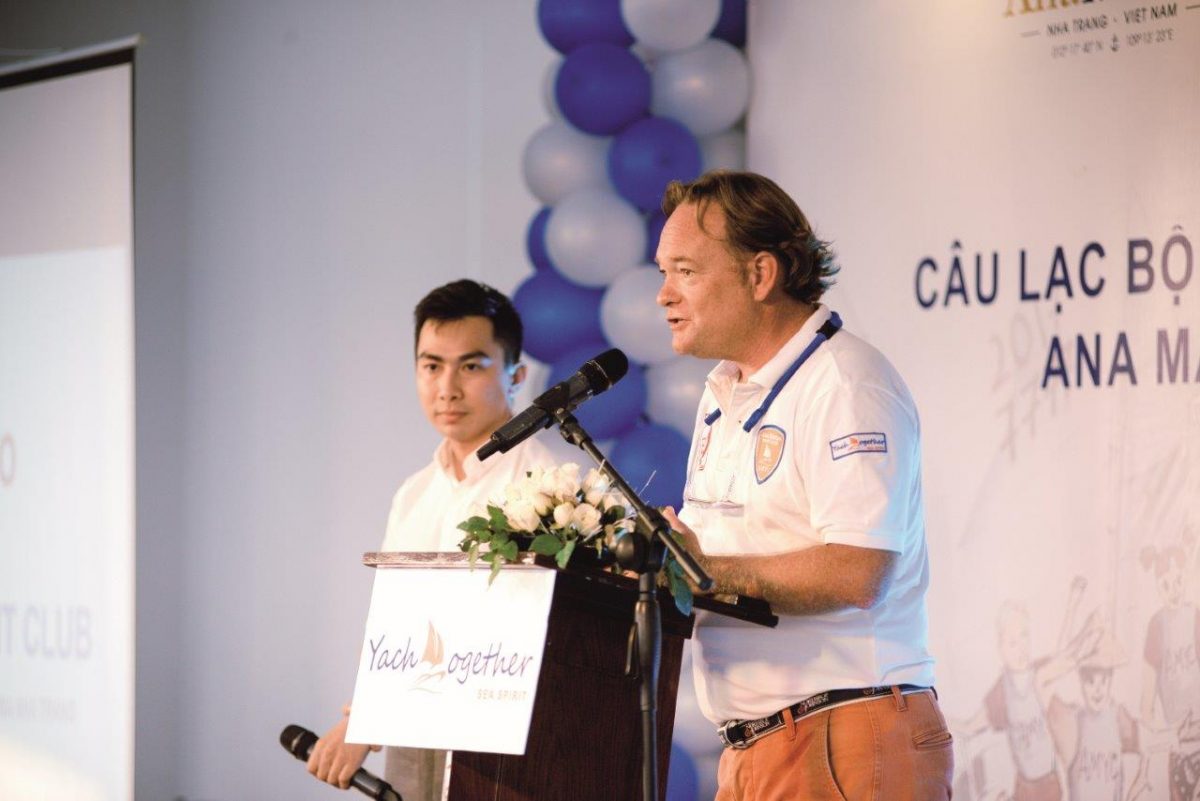 “We started to train crew, and with the Russian tourist boom from 2007 to 2008, this allowed us to increase our operations and fleet,” he explains.

As the demand for yachts increased, it soon became clear that some potential owners were keen to buy yachts but didn’t know where to keep them, Van Putten observed back then. “Questions on maintaining them and getting a crew for them were also issues,” he adds. “It was a chicken and egg situation for marinas and investors – if there are not enough yachts to fill them, is it worth the risk?

“There are still only a select few who have the buying power to own a yacht – and they are interested in luxury motoryachts, with a popular size of 10m to 15m.”

“We have the opportunity to build new marinas where we can build them to the latest standards. This would be an opportunity for Vietnam to be very progressive” – Ruurd van Putten, owner-director, Anchor Management, Nha Trang

With a yacht purchase unattainable to many, the market for day charters is growing well, and this has a knock-on effect of creating an increasing demand for water-sports equipment and other marine toys in the country. 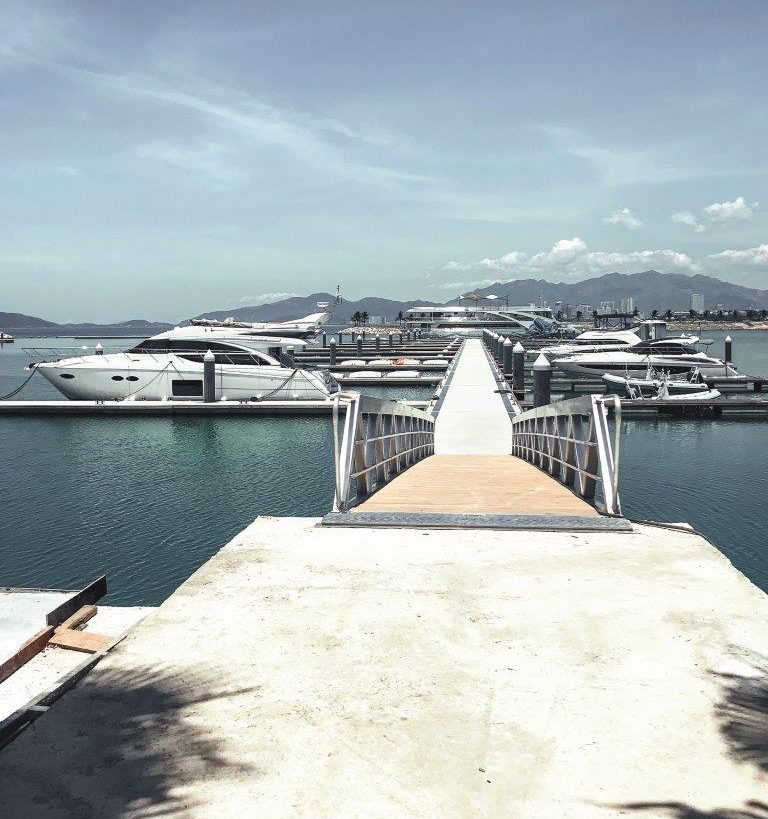 Van Putten is currently focused on marina development in Vietnam and elsewhere in Southeast Asia, and that’s taken him into the area of sustainable solutions.

“Vietnam is developing its yachting scene – discussing the issues around marinas and yachts, like electric propulsion, plastic reduction,” he says. “It would be a good way forward, where we have the opportunity to build new marinas, if we can build them to the latest standards. This would be a chance for Vietnam to be very progressive.”

Right now, he is working in the pre-development consultations of three marinas in Vietnam, just as he did with Nha Trang’s Ana Marina during its first phase. Van Putten helped engage the services and liaise with some of the top European marina design, engineering works and other solution providers, to produce what was really the country’s first world-class facility. 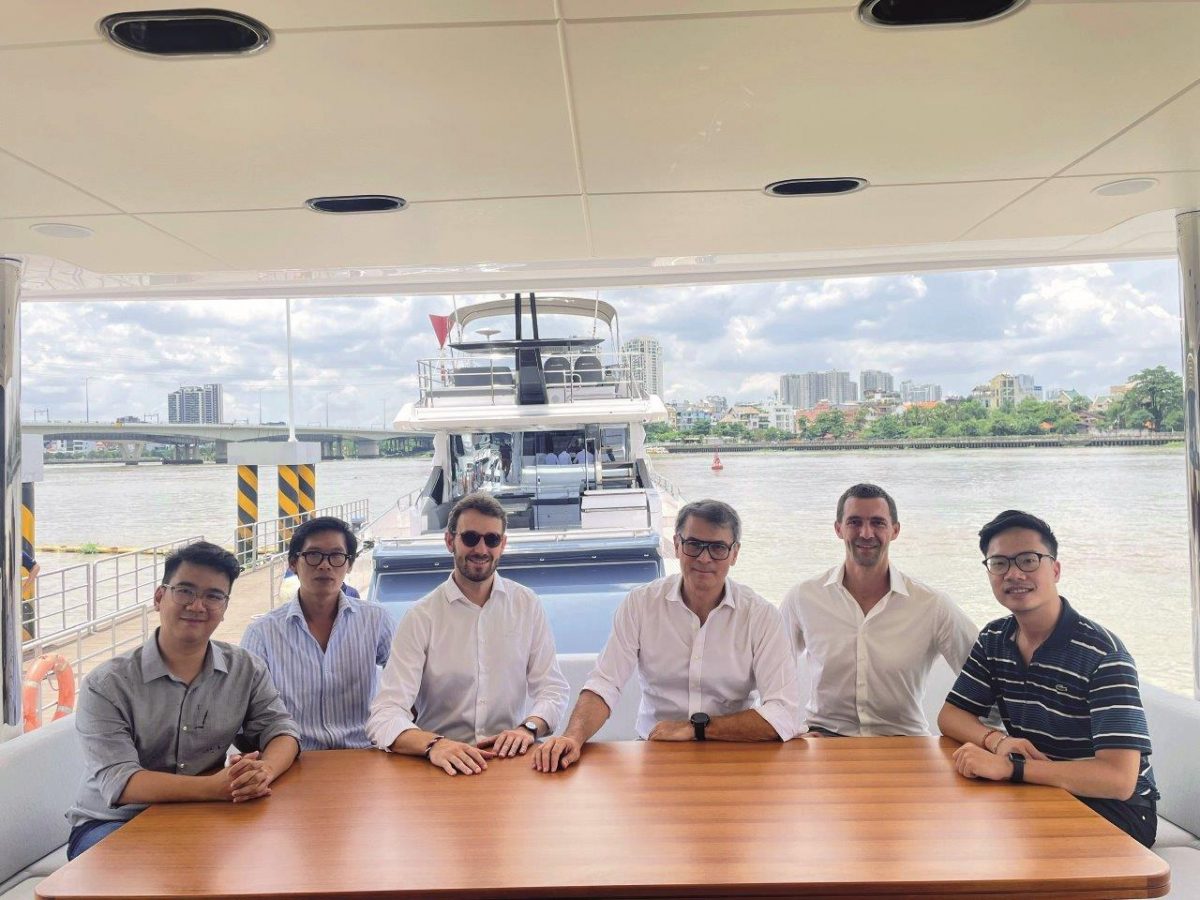 Ana Marina, which is still not in its final phase of completion, has engaged some of the local community with introductory sailing and boating for children who would not normally get the chance to experience it.

Ana Marina, which is still not in its final phase of completion, has engaged some local communities with introductory sailing and boating for children who would not usually get the chance to experience it.

Van Putten says that some big developers are showing interest in residential marina projects and waterfront properties with docks.

Of the latter format, Michael Aumock, American former general manager of Ana Marina – now founder of The Halong Bay Company, specialising in marina design, development and operations in Vietnam and Asia, also a yacht and commercial vessel construction supervisor, with a background in luxury lifestyle sales, including private jets and cars – is currently working on completion of a new private villa complex in the Danang area. Located on a riverside two kilometres from Danang Bay, with a private dock and mooring in front of each residence, phase one is due for completion in early 2023.

Aumock is co-founder and director of the “Dock & Home” project. “Some clients already have yachts, and others are asking us to source them,” he says. “We’re offering contracts for the boats that include crew and maintenance.” 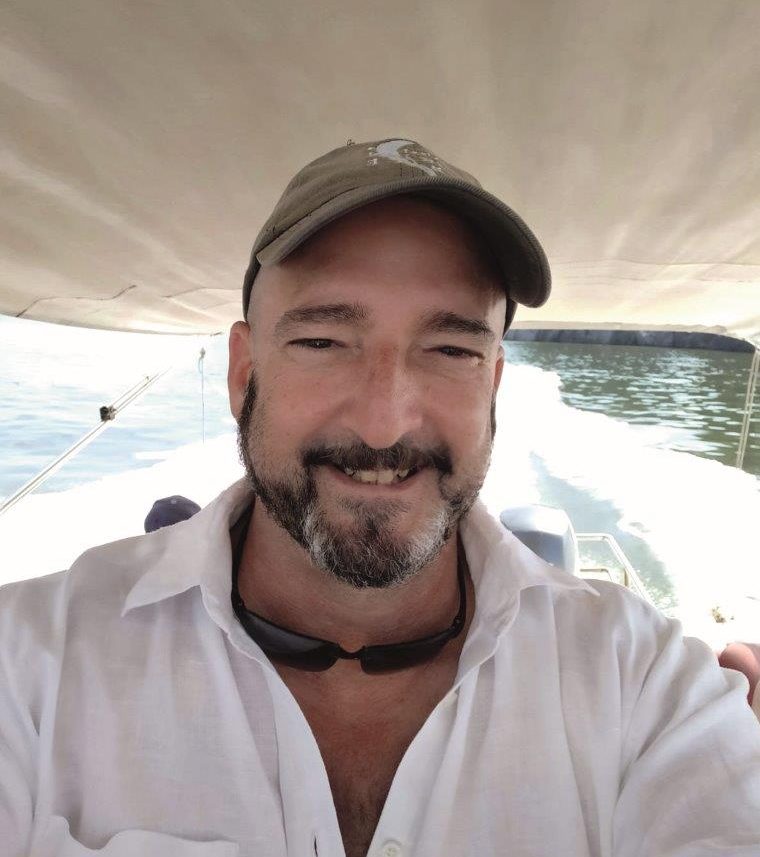 Tam Son Yachting (TSY), the other key international yacht brand dealership with a service and maintenance yard for yachts up to 100ft (30.5m), is based in Ho Chi Minh and was launched in 2017. The company is part of Openasia Group, which specialises in luxury retail and exclusive distribution of luxury brands, products and services in Vietnam (including Hermès, Patek Phillipe, Vacheron Constantin, Audi, B&O and others). Initially, Tam Son Yachting became the exclusive dealer for a mix of motor- and sailing yachts, with Beneteau, Lagoon, Monte Carlo Yacht and Zodiac Nautic brands. This grew to include Azimut Yachts, Iguana, Ocean Voyager and Saxdor.

Another boat brand, Kepler, will soon join the portfolio – developed by TSY and produced in Vietnam. “Based on the experience of Openasia Group with luxury craftsmanship, we aim to build a product for Vietnamese clients with high-quality finishing and affordability,” says Vu Tran, TSY sales and marketing manager. It’s hoped the first model – an 8.5m semi-rib boat – will launch in the last quarter of this year, followed by a motor catamaran in late 2023.

“We felt there is a lack of supply from the world’s top brand for small boats – a rising trend for Vietnam,” he adds. “Also, we have good connections with resorts in Vietnam; locally built high-quality boats can be used for their transportation, sports and rescue needs.”

The first Vietnam Kepler brand model from Tam Son Yachting is an 8.5m semi-rib boat, which is hoped to launch in the last quarter of this year, followed by a motor catamaran in late 2023

TSY was the main exhibitor in the Saigon Yacht Show 2021, bringing its fleet of seven yachts, from monohulls to catamarans, to this first yacht show in Vietnam. Before the end of 2022, as TSY celebrates its fifth anniversary, it will hold a yacht show. “Right now, we have a fleet of more than 40 boats between eight and 25m,” says Tran.

A charter division of TSY is in development, in cooperation with high-end partners, such as drinks distributor Diageo, to create events that combine yachting and ‘lifestyle’ experiences. TSY owns two marinas in Ho Chi Minh City and nearby Dong Nai province and plans to open a further five in Ho Chi Minh’s other provinces in 2023 and 2024.

However, hopes remain high among those APB spoke to on the domestic scene. Huong says, “Some potential buyers have not bought yet because there are so few marinas or other docking, and these can be far from their homes. We expect Vietnam will have marinas at all our beach cities within about three years.”

All interviewed here said that while no boating association exists in Vietnam (where there are strict rules on forming organisations), local boating communities do mention this. It is hoped that it won’t be long before one is established.

A note to potential yacht visitors

International cruising into Vietnamese waters is something to consider carefully: for foreign-flagged yachts wanting to enter, the procedure is not so easy.

“You are only allowed to enter official seaports with Customs, Immigration and other official offices – and then to travel between these,” says Ruurd Van Putten of Anchor Management in Nha Trang. “So you have to switch your itinerary to fit these ports. It is possible to submit a cruising plan – but time has to be allowed for this. And we have advised on this for visitors.

“All vessels entering Vietnam from overseas are treated the same – whether a yacht, a cargo ship, a tanker or other type. Also, captains and crew certificates of competence are very carefully checked.”