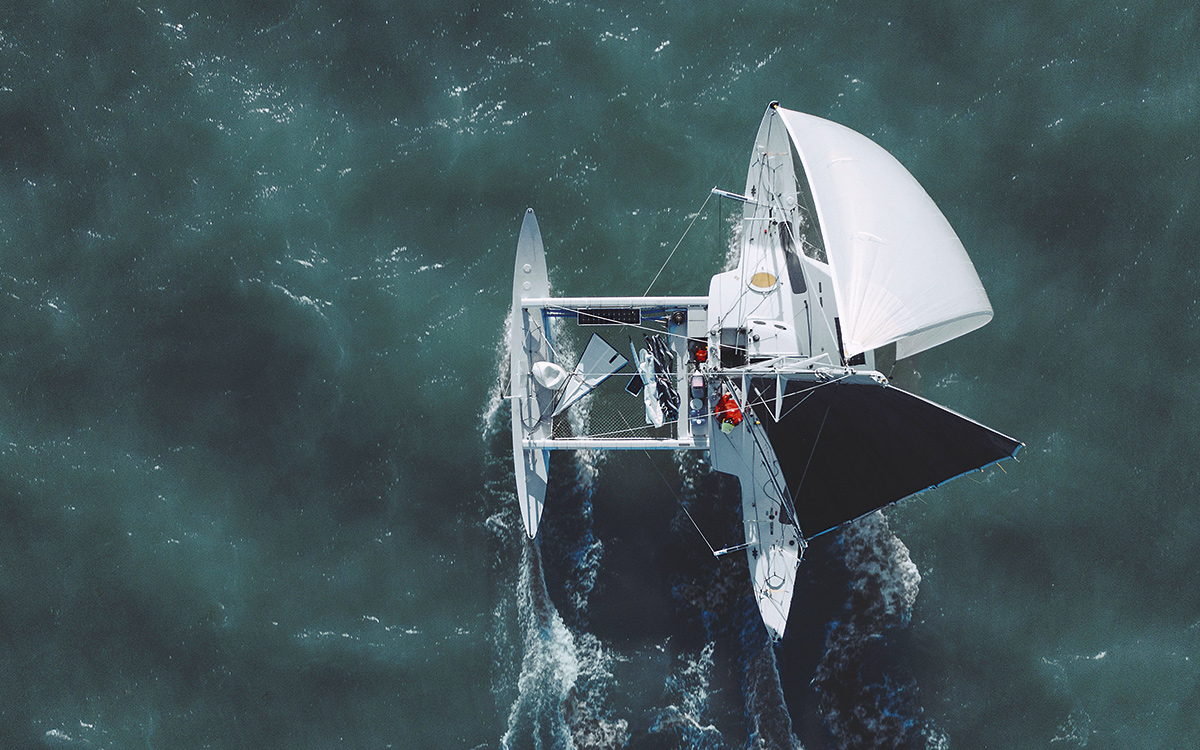 Jzerro is a Russell Brown-designed proa, which is being prepared for a 14,000-mile record bid from New York to San Francisco

The great Californian Gold Rush of the 1840s and 1850s saw over a quarter of a million people follow the sun to the west of the United States, each dreaming of making their fortunes.

The ‘49ers’, as the early migrants in the first wave of 1849 were known, mostly travelled by ship, sailing from New York to San Francisco westabout around Cape Horn. It was an arduous and dangerous journey, but over 500 vessels – from majestic clipper ships to hastily converted whaling boats – made the voyage in 1849 alone.

The route is as much a part of the American maritime heritage as the clipper tea routes are a part of Britain’s. The benchmark fastest sailing between the two cities was set by the 225ft three-masted clipper Flying Cloud, which sailed around in 89 days 8 hours in 1854, a time that was unbeaten for 135 years.

Since then over 200 record attempts have been made, in everything from trimarans to maxis, yet it has never been attempted in a single-handed proa. American sailor Ryan Finn is bidding to be the first to do so, solo and non-stop.

Proas have been around since adventurous island dwellers first strung cloth atop a dug-out canoe, with early versions developed by Austronesian sailors for exploring the unknown southern seas of the Indo-Pacific some 7,000 years ago.

Made up of a single hull and second ama, they are light and fast, and simple to construct. Devotees of modern incarnations of the proa praise them for their speed under minimal sail area and their ability to absorb waves with less slamming and uneven loading than a conventional catamaran. On a close reach, Jzerro can easily pass boatspeeds of 17-18 knots. 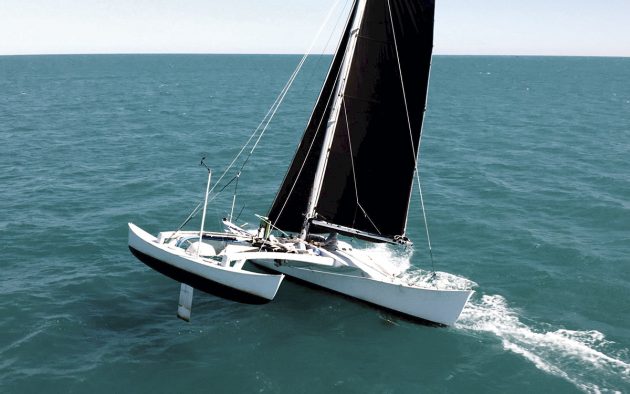 However, the geometry of a Pacific proa (ie with a small ama to windward) does present its challenges.

In order to be able to sail with the ama to windward on both port and starboard tacks, a proa must be symmetrical both fore and aft with two ‘bows’, two lifting rudders, and a rotating mast.

On a boat the size of Jzerro, which is 36ft long, accommodation and stowage is severely limited by the single hull, and cockpit protection almost nonexistent. Attempting to sail a proa around Cape Horn, against the prevailing winds, is an extreme challenge. 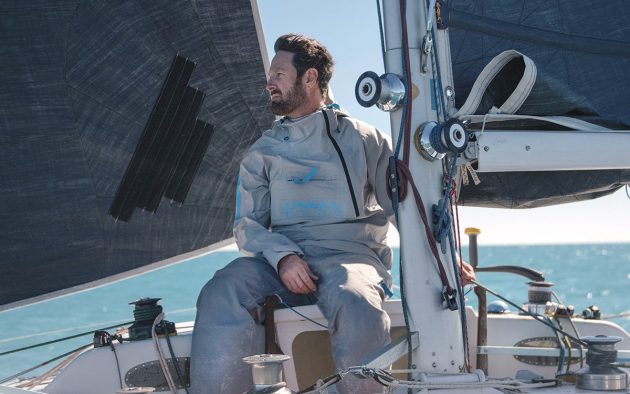 Ryan Finn says the idea of a proa adventure was what first inspired him. “The boat concept came before the route. I’ve been thinking about multihulls than can sail upwind without experiencing major structural issues, and that’s where I became aware of Russell Brown’s designs. I knew they had successfully travelled far and I realised a proa would solve a lot of the structural beam issues that big catamarans and trimarans have, since you’re not leaning on the leeward ama – the leeward ama is the main hull.” 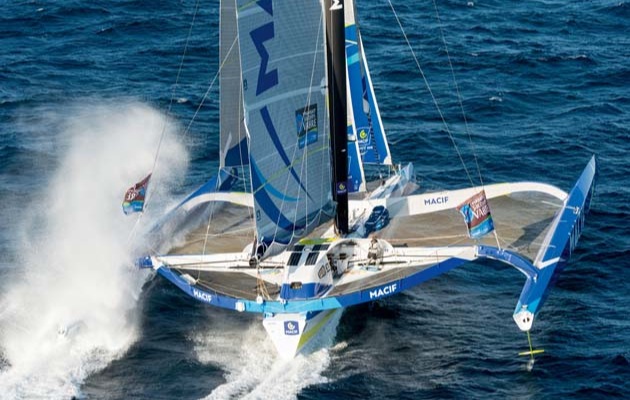 With the ORMA 60 and MOD70 trimaran classes successfully killed off, you would have thought that French multihull sailors might…

Inspired by sailors like Tom Follett, who raced his proa Cheers from Plymouth to Newport Rhode Island in the 1968 OSTAR, Finn was sold on the proa concept. He bought pioneering proa designer Brown’s own Jzerro, which Brown had sailed across the Atlantic and Pacific Oceans.

Finn has been working as a delivery skipper for many years and before that competed on the Mini Transat circuit. “There was no way I’m going to raise money to race in France, I’d already attempted to do that before,” he explains. “I can never compete with their budgets, so I thought I should stop trying to play their game and just do the kind of sailing that I want to do. 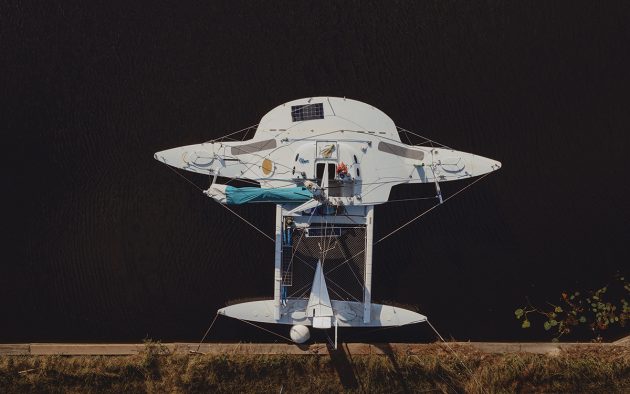 Aerial view of the symmetrical proa, showing its two bows, two rudders, and duplicate stays and fittings for flying foresails when the mast is rotated. Photo: 2Oceans1Rock

“The New York-San Francisco record was very difficult and very long, and it was available, because no-one has done it single-handed non-stop before so I thought I’d give it a shot.”

Single-handed record attempts at the route have been rare: in 1989 Philippe Monnet attempted it on a Shuttleworth-designed trimaran. Monnet had to stop and restart after hitting ice, but managed to complete the voyage in 81 days. The crewed record, meanwhile, was set by the 110ft catamaran Gitana 13 at 43 days in 2008.

Despite its metropolitan start and finish points, much of the 14,000-mile route is more akin to an ocean crossing. “A lot of people don’t realise how far to the east Brazil is, it’s way out there,” points out Finn. “So to clear the eastern point, you have to go really far offshore, almost like a transatlantic, more than halfway across the Atlantic to get around that point. Then there’s potential for a lot of coastal navigation around Patagonia, and in the Pacific, it should be pretty far offshore too.”

Although Brown had sailed Jzerro double-handed across the Pacific, Finn needed to modify the boat for solo sailing. “The biggest thing was I needed new sails and I wanted the sail handling to be a lot different.

So I’ve moved a lot of chainplates for the headsails on both ends, and added medium roller furling sails on halyard locks,” recalls Finn. 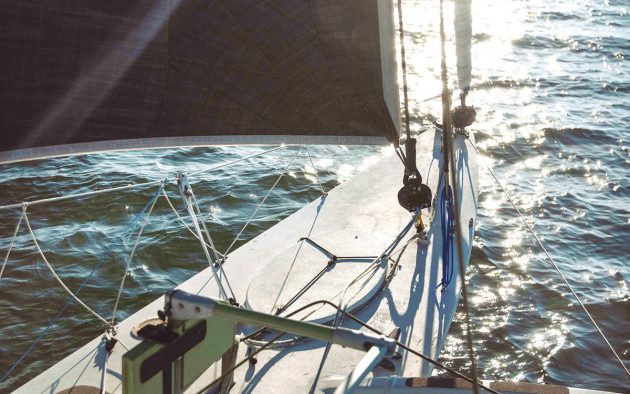 The ‘off-duty’ rudder is lifted, here the ‘port tack rudder’ as Finn refers it. Photo: 2Oceans1Rock

Proas do not tack, instead proa sailors make a manoeuvre called ‘shunting’, which involves setting a new foresail, furling and lowering the old one, easing the main out to leeward, rotating the rig, resheeting the boom to the ‘new aft’ fitting, and raising and lowering a rudder on either end.

Finn says that the proa is not unstable during the process, however. “Because the mainsail is completely to leeward, just sort of flagging there, the boat is really settled when you’re shunting, it’s a good time to take a break – the boat parks and you can really stop.” Shunting is not, however, an easy manoeuvre to make with limited searoom.

Finn has opted for wind instruments on a static pole on the ama, rather than masthead units on the rotating rig, for simplicity. However, he points out: “Because you’re going forwards and backwards, you have to recalibrate the autopilot every time you tack. Everything has to flip 180°, so it’s kind of complicated. I’m getting used to it, but I don’t know how many proas there are sailing that have autopilots!” 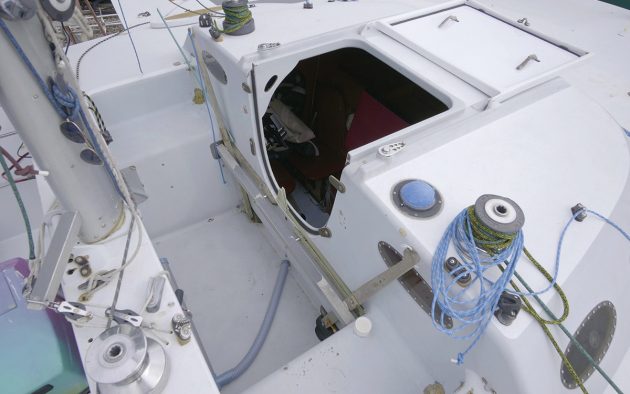 The tillers use whip-staff steering principles and are mounted vertically in the small cockpit. Photo: 2Oceans1Rock

Another big element that needed improvement for the record attempt was shelter. “The boat is very, very wet because it’s very light, so there’s a lot of spray. I’ve created a dodger that I can tack from one end to the other that protects the cockpit pretty well,” explains Finn. When not required, the dodger can be lashed to the trampoline.

Initially New Orleans-based Finn hoped that his all-American endeavour would attract sponsorship, but when little was forthcoming he decided to push on with the record bid as a low budget project, cutting his own sails, and building custom components such as halyard locks himself.

Finn hopes to inspire others to realise that adventure sailing can be affordable. “I always wanted to prove that you don’t have to have millions of dollars for a boat that’s capable of setting an impressive record,” he says.

Accommodation on Jzerro is limited within the main hull and leeward pod that extends outboard – and although Jzerro’s ply interior was beautifully crafted, Finn describes the sink as his sole luxury. Solar panels and a fuel cell were installed for power, with Iridium GO! for communications. 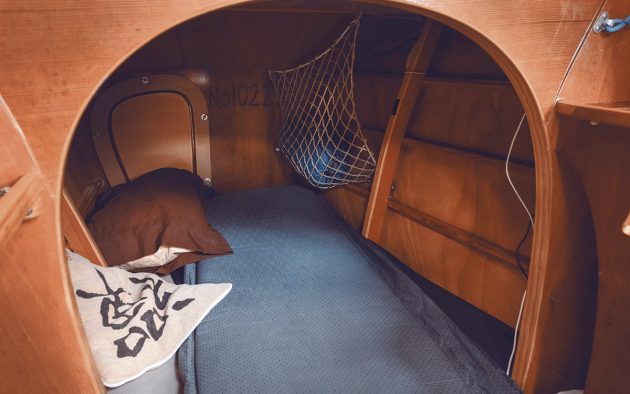 Interior is beautifully built in plywood but there’s not a lot of space. Photo: 2Oceans1Rock

Finn’s first attempt at the record began on 21 January 2021, but Jzerro sustained damage off the eastern seaboard, puncturing the forward edge of the leeward pod, and the attempt had to be aborted early on. Finn has returned Jzerro to Brown’s yard, where he’ll make repairs and hopes to resume his record bid.

“Having sailed over 10,000 miles on Jzerro, and in much more demanding conditions than I saw during this record attempt, the damage was a surprise, but also a good revelation for preparing to make another attempt,” explains Finn.

The biggest contributing factor leading up to this failure, he says, was how heavily loaded Jzerro was when he left New York, largely due to the volume of water he was carrying (he had no watermaker due to budget restrictions). Finn is now working on a major weight saving programme to reduce loads on the structure, also adding a watermaker and increasing power capacity.