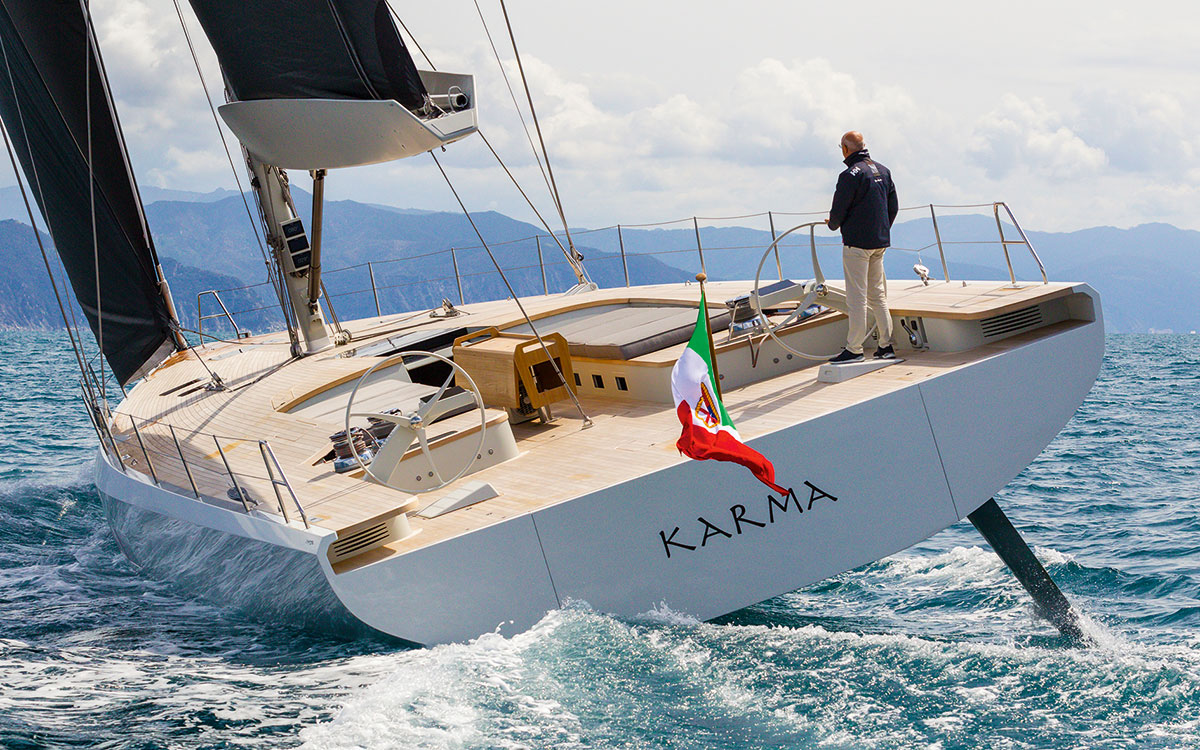 Translated literally, karma does not mean fate, as it is commonly misused, but action. It’s the actions you have taken in the past, take now, and will take in the future, and their consequences. Cause and effect, not some kind of cosmic levelling out of good things you did versus bad stuff you shouldn’t have.

So it’s a surprisingly fitting name for this yacht, which was designed with clear intent from the outset. Most aggressive racing one-offs end up looking that way because they are created to do a particular job. But for a cruising design to turn out looking – at first glance at least – as if it could line up on the Maxi Worlds startline was no happy accident, instead Karma is the result of a very deliberate set of actions.

The Maxi Dolphin 75-footer is from the drawing board of Mark Mills, the Irish designer behind the radically elegant Maxi 72 Allegre and the Wallycento Tango. Mills has a strong racing pedigree, but Karma isn’t a typical racer-cruiser compromise. Instead, the concept for the boat arrived at Mills’s desk with a fully-formed brief. 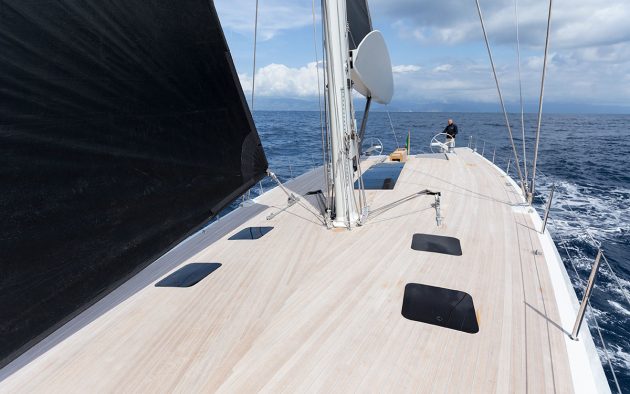 As well as having recruited a highly experienced project manager with an America’s Cup background, Karma’s owner had a fixed plan for how his new yacht should look.

“From the outset, he had a very clear idea that this would be a flush deck, that the winches would be just in front of the wheels, that there would be very wide sofas in the cockpit. It really has varied very, very little from the original discussions,” recalls Mills. 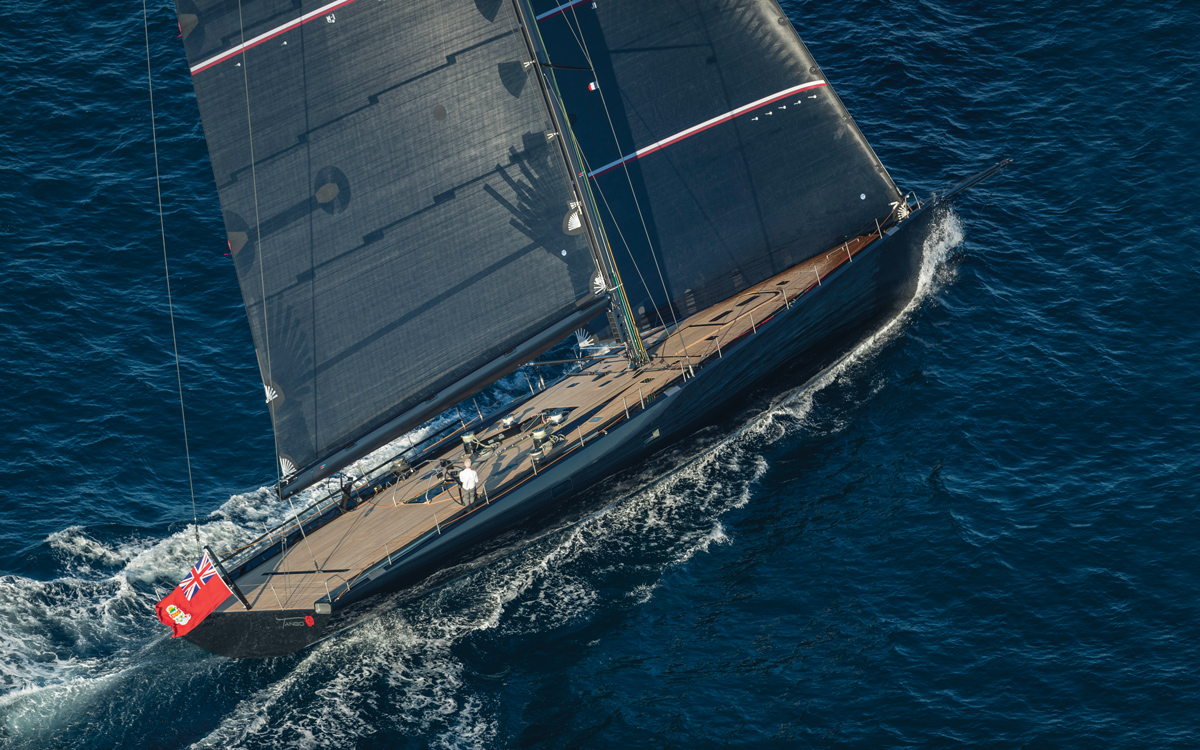 This may be the fourth 100ft yacht designed to the Wallycento box rule, but it’s one that raises the bar… 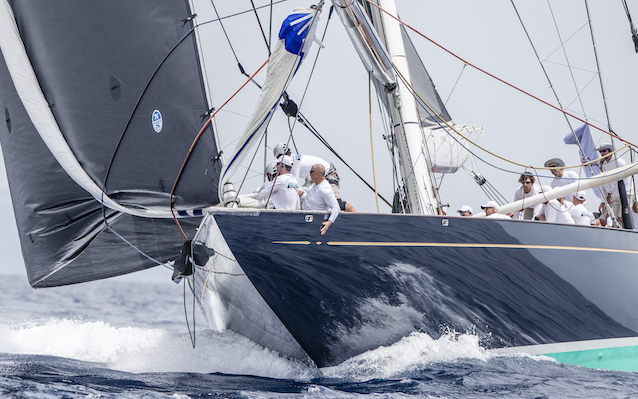 The Italian owner, who chooses to remain anonymous, is a keen kitesurfer and has sailed fast multihulls in the past, but doesn’t come from a big boat background. Unsurprisingly Karma is designed for have-a-blast excitement with a strong emphasis on the aesthetics.

“I think it really was a bold step into the unknown. Clearly, being a kitesurfer, he was quite bullish about the fact that it should be a very sleek, cool looking high-performance cruiser,” says Mills. 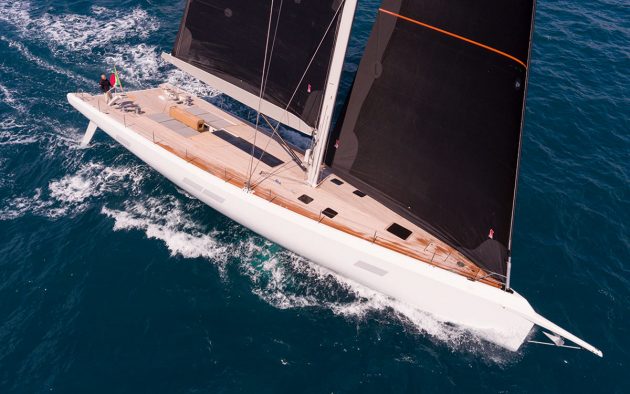 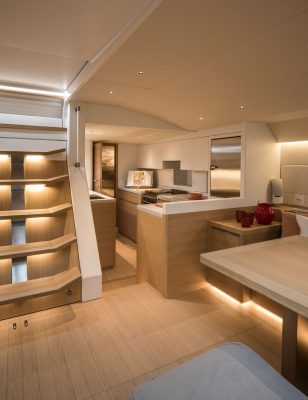 “But there was almost no desire ever to race, which is normally what’s driving performance in quite detailed ways. You usually end up looking at the exact events that an owner is going to do and how heavy the crew weight is going to be, and all those sort of things play into the design. And I really didn’t here. The performance aspect was more around the fact that he wanted to be able to just jump on his boat and sail across to Ibiza, then go back to Italy or off somewhere else.

“We’re missing a good word for this sort of boat – an express cruiser perhaps? He was never going to do a two-week offshore passage, that wasn’t his goal. It was about making the 200-300 mile trips as quickly as possible and have a cool apartment to stay in when you got there.”

With no box rules or racing parameters to work within, the beamy hull shape could become slightly higher volume forwards, with twin rudders for offwind handling. “It’s relatively reaching oriented, given that it’s not trying to race and it’s never going to do windward leeward courses, so it’s a relatively full bow volume wise,” explains Mills.

Weight was kept low with a carbon corecell hull and deck construction, and Karma was built using female moulds for repeatability.

Karma also has a lifting keel from Cariboni, which Mills says is the only workable solution for balancing performance with any level of cruising practicality on this type of design. “It almost isn’t possible to get the combination of light displacement and stability if you do a fixed keel of reasonable, normal draught,” he explains.

“You’re going to end up with a much smaller rig or a much wider beam waterline, or more weight, or some other negative outcome if you can’t do a relatively deep keel, which means a lifting keel.”

Some areas of cruising convention have been dispensed with – for example, there is no pushpit provision to enclose the transom – while other nods to practicality have been stealthily hidden with neat detailing. Almost invisible in the expansive teak decks is a recessed stainless steel frame, which pops out to form the dodger arches to protect the cockpit.

Because the back of the coachroof is angled at the companionway entrance, the washboards are made of tambour slats which also roll away vertically into a recess – like a very glamorous version of a slat-fronted bread bin. 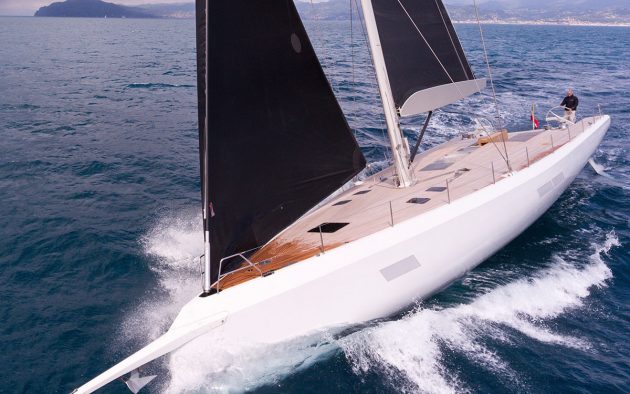 Given his passion for kitesurfing, the owner is a very hands-on when it comes to helming Karma, and the 75ft boat has been set up for short-handed sailing with all controls led aft to the twin helm stations, headsails on recessed furlers, in-boom furling, and a swept spreader rig with square top main, but no backstay or runners for simplicity of handling.

Between the twin rudders there is – as you might expect – an enormous garage for toys, including a large jet tender. A central transom section folds down to become a swim deck and launching spot for kites or paddleboards.

Karma’s interior is by Nauta Design in Milan. Generating sufficient headroom for a luxurious living space was the main design challenge given the yacht’s racing profile and relatively low freeboard, achieved through a barely perceptible hump or ‘bulge’ over the saloon in the otherwise flush deck.

The interior is designed to be casually stylish, with a large lounge sofa that can comfortably seat four people opposite a dining area that can accommodate eight. The galley is open plan, informal family style, instead of being closed away for crew use only.

There is a master stateroom forward, a guest double aft, an additional twin cabin with a Pullman berth, and crew cabin, each with ensuite heads. Rather than high shine finishes, Nauta has styled the boat with a ‘scratched’ effect oak cabinetry and linen fabric panelling, to add the relaxed contemporary feel.

“I personally really like that style, which is very relaxed. I think it’s like how people want to use their boats, to have a comfy sofa to go crash out on. And the ability to do it with lots of volume and space and not feel crowded was cool,” says Mills. 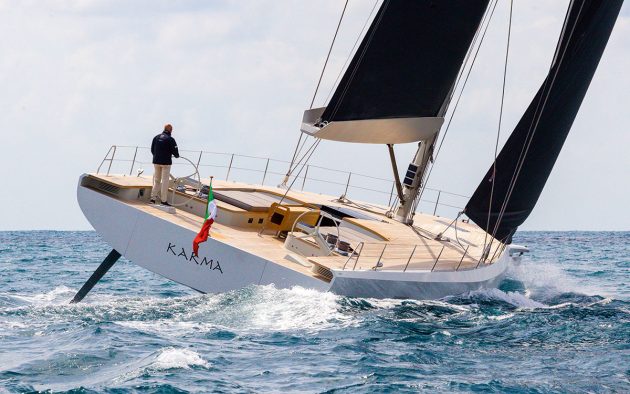 No backstays or runners add to the open transom. Photo: Francesco Ferri/Maxi Dolphin

In keeping with her raceboat aesthetics, the windows and hatches are discrete, with flush cabin and saloon deck hatches and the hull windows concealed by an outer film that appears white from oustide, but lets the daylight in.

“The drawback of this sort of flush deck is you lose the coachroof sides, which everybody expects to see in glass, and therefore are an easy way to get light in. So there’s even more pressure to do something with hull windows – they could get bigger and bigger, but the goal was definitely to try and keep them muted,” explains Mills.

But Karma was never intended for sitting in and looking at the sea, It’s a boat designed for hoisting sails, launching kites, and blasting across off across the waves. Karma means action.

First published in the January 2021 issue of Yachting World.