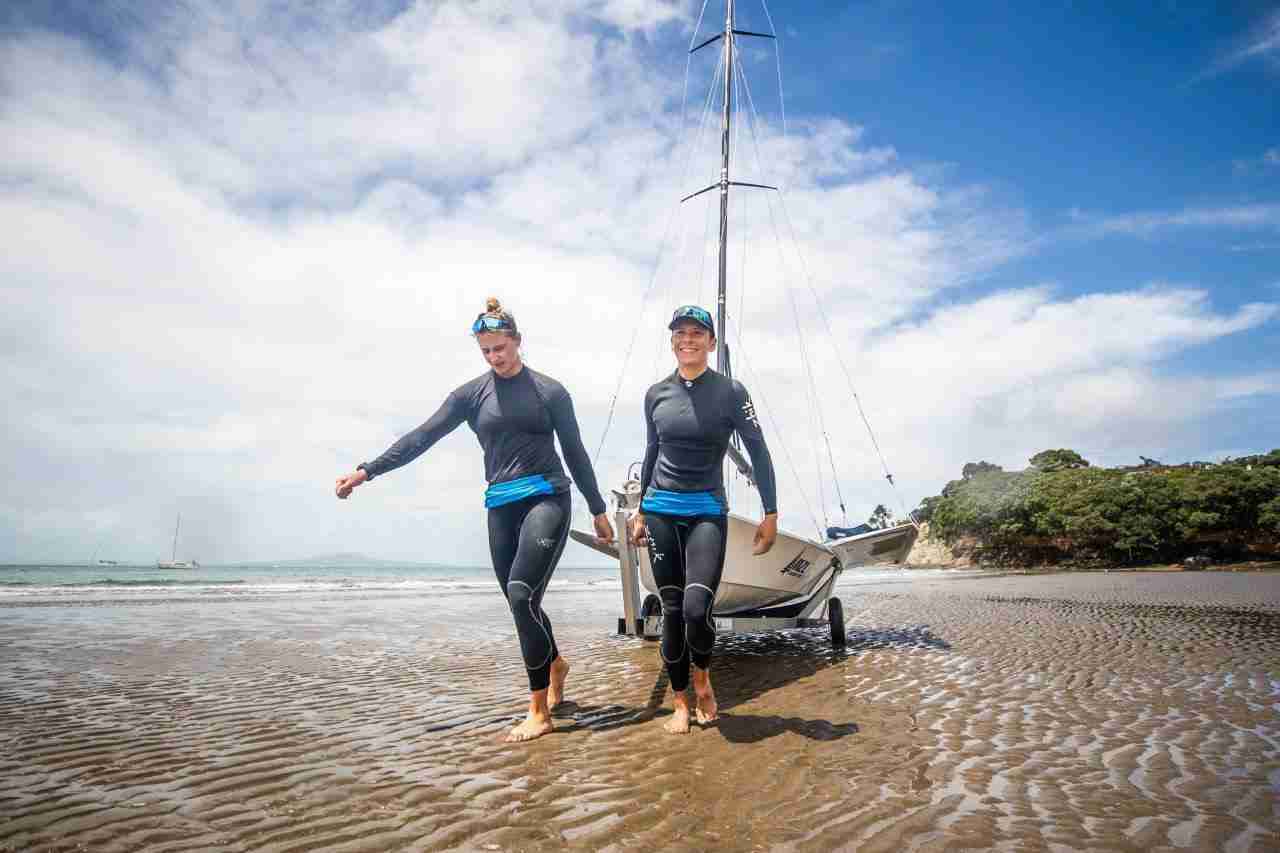 The sailing world is fraught with gender inequality. According to a recent international study by the World Sailing Trust, 59% of female sailors say they have previously experienced discrimination, compared to 14% of men.

Respondents cite experiences of isolation and harassment, being treated as less competent and experiencing slights on board, a lack of opportunities for women and girls, being stereotyped by gender and receiving less support than male counterparts.

Combined with a historic dearth of female representation in competitive sailing, it’s clear that there’s a long way to go before a level playing field will be achieved.

However, there is cause for hope. The sailing scene is slowly but surely diversifying and female sailors are scaling new heights in competition, proving themselves on the world stage. In 2018, Australia’s Wendy Tuck won the Clipper Race, becoming the first woman ever to win a round-the-world yacht race. And, the 37th America’s Cup, scheduled to be held in 2024, will be the first in the event’s 171-year history to feature a women’s regatta.

Here, we meet four sailors from across Asia who show why sailing is no longer an old-boys club. 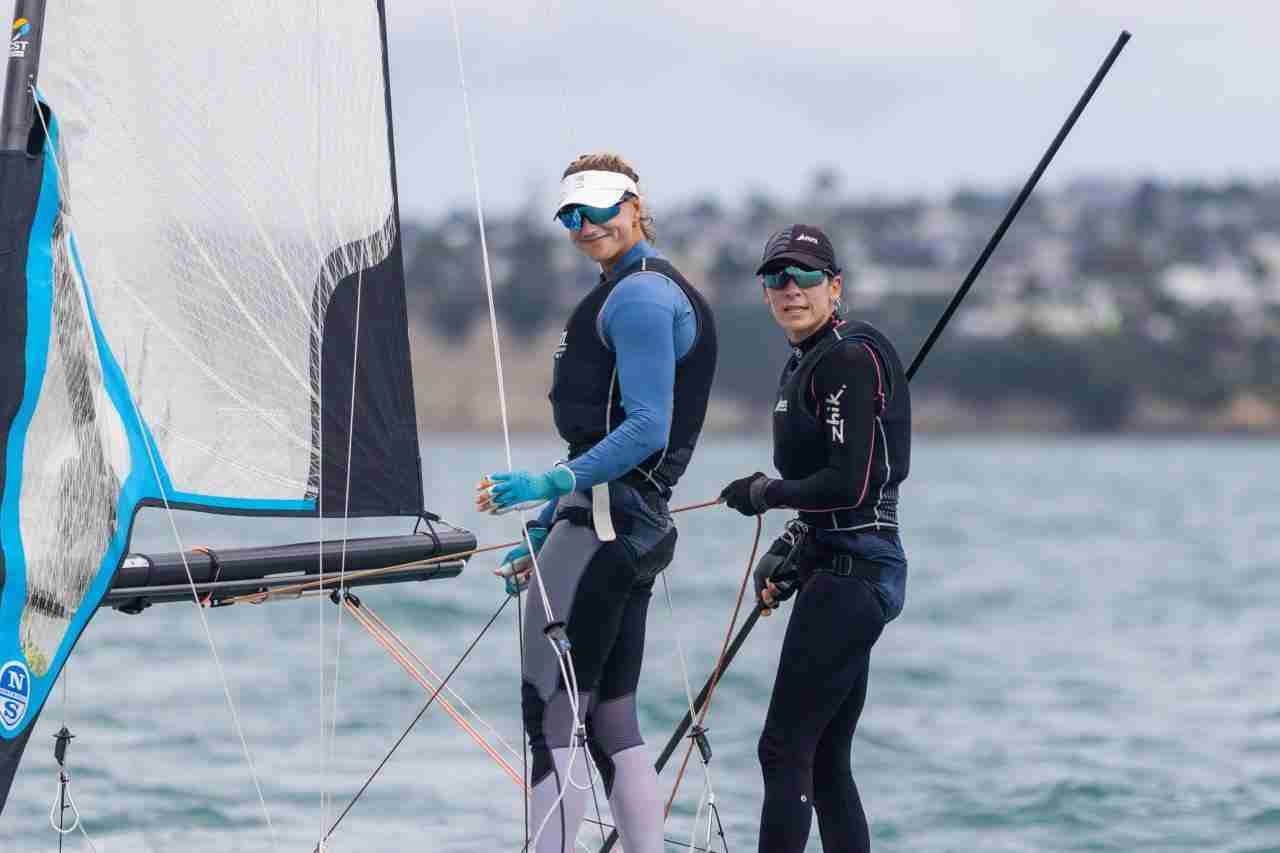 Jo Aleh was nine years old when New Zealand won the 1995 America’s Cup, snatching the Auld Mug from the United States for only the second time in 144 years.

“I was fascinated by Team New Zealand’s win…and asked my parents if I could try sailing,” she says. Her dad took her down to Ponsonby Cruising Club in Auckland for lessons, and from the get-go, she was hooked.

Her promise was evident from the very beginning when she won the Tanner Cup, a New Zealand P-class regatta, at the age of 15 – becoming the first woman to win the event in its entire history.

Despite her initial success, Aleh faced many challenges in the early stages of her career. Lacking resources or connections in the sailing world, she also found it hard to finance her endeavours. “It was really hard to find the funds to get overseas and compete, and there were times when we wondered if it was possible,” she recalls. “I even had some wider family saying, ‘why are you bothering with this? Surely, it’s better to let it go.’” 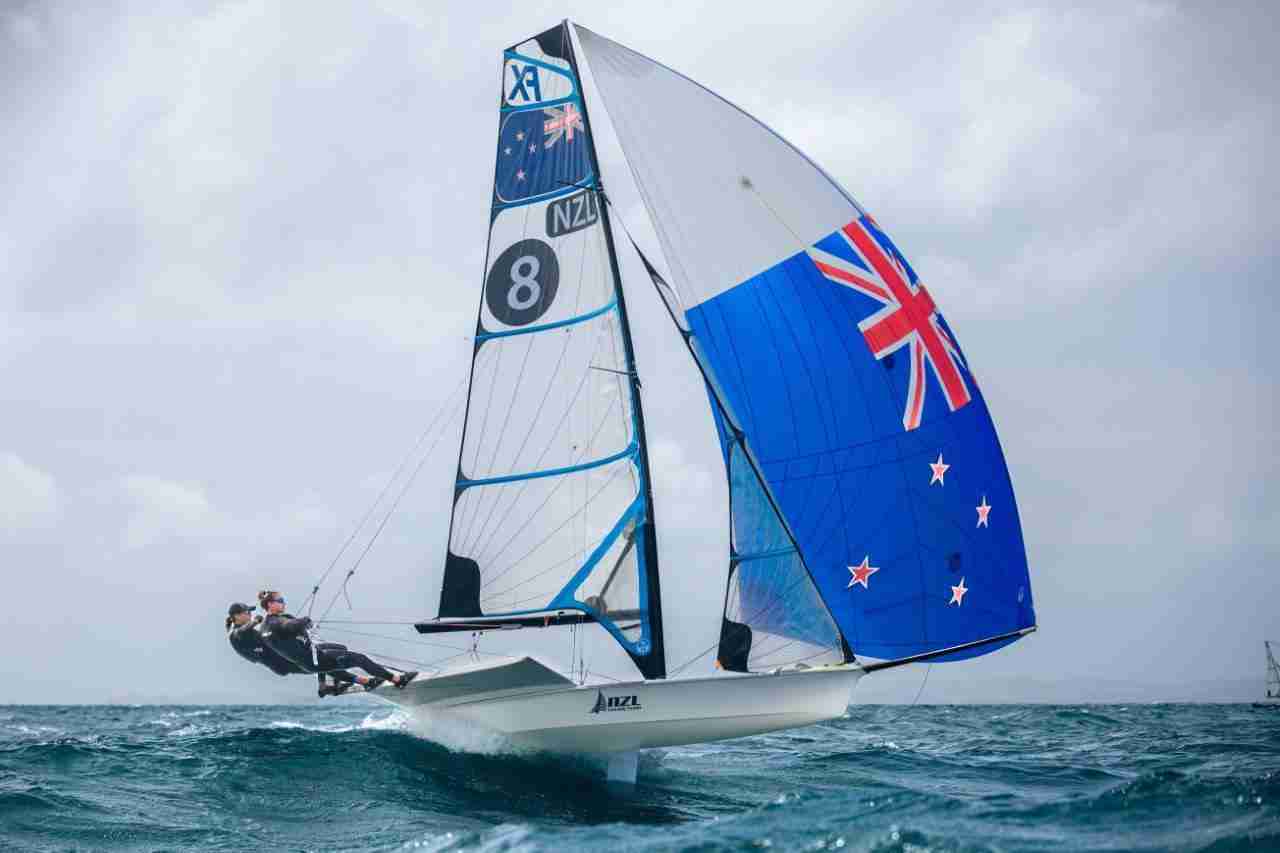 Aleh won the Tanner Cup at the age of 15, becoming the first woman to ever win the regatta | Photo: Yachting New Zealand

Since then, however, she hasn’t looked back. Paired with Polly Powrie in the 470 sailing class, Aleh bagged two Olympic medals – a gold and a silver – alongside six medals at World Championships.

Out of all her triumphs, Aleh views her silver-medal finish at Rio 2016 as her most cherished victory. “It was a really tight race, and if I watch the video now, I still get a bit stressed,” she notes. “I vividly remember having to make decisions throughout that race which were considered and calculated even in an intense situation.” Aleh finished third in a nerve-wracking nailbiter – enough to come second overall.

Aleh took a break from competitive sailing after Rio 2016 and coached fellow countrymen Micah Wilkinson and Erica Dawson for the Tokyo 2020 Olympics. She’s back on the water again, though, and is currently training for the Paris 2024 Olympics with compatriot Molly Meech. “We’ll go to a few events this year just to see how we are going, but we’re very much taking it day by day. At this stage, it’s about trying to get back on the Olympic circuit and seeing if I’ve still got it.” 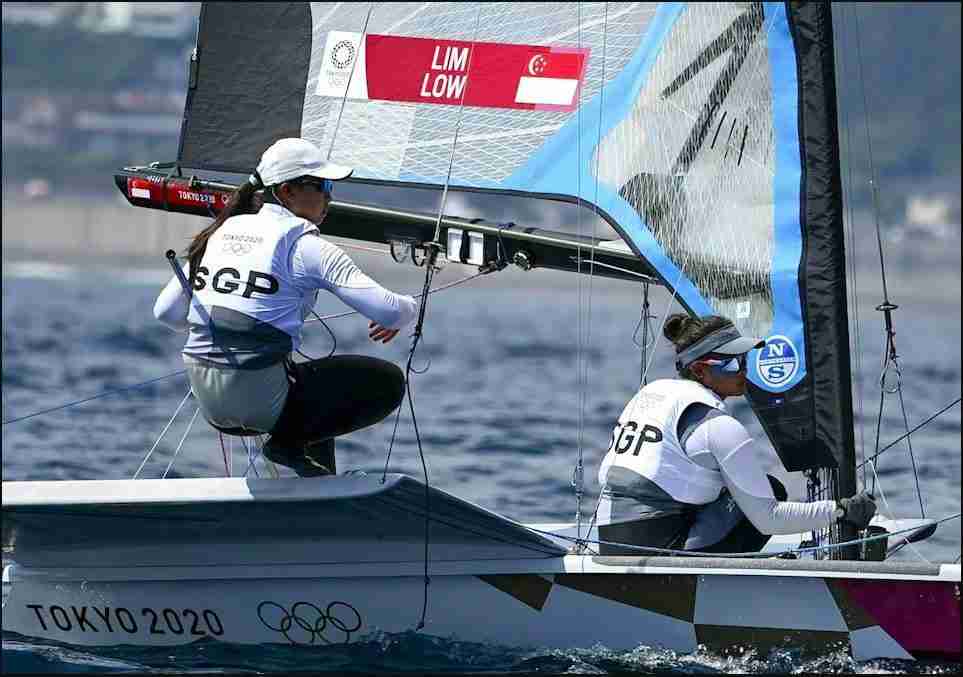 Kimberly Lim’s performance at the Tokyo 2020 Olympics sure did shake up the Singaporean sailing scene. Competing alongside Cecilia Low — she finished tenth in the 49er FX event. They were the first Asia-Pacific finishing pair overall, and their placing was the best one that a Singaporean sailor has ever achieved at the Olympics.

“In one word, the Olympics were amazing! There’s nothing quite as special as setting your mind on something for the last 10 years and finally realising it,” Lim pointed out. “My biggest takeaway would be to ‘never let your past determine your future’ – regardless of your prior results, always keep pushing till the very last race.”

Despite Lim’s success, it wasn’t all plain sailing for her in Tokyo. On the second day of the competition, she struggled to find pace, nor was she able to fully wrap her head around the race strategy that she’d mapped out. “It crossed my mind whether we had just let this Olympics slip away. What I can say now is that I’m so glad we pushed through and came back the way we did!” 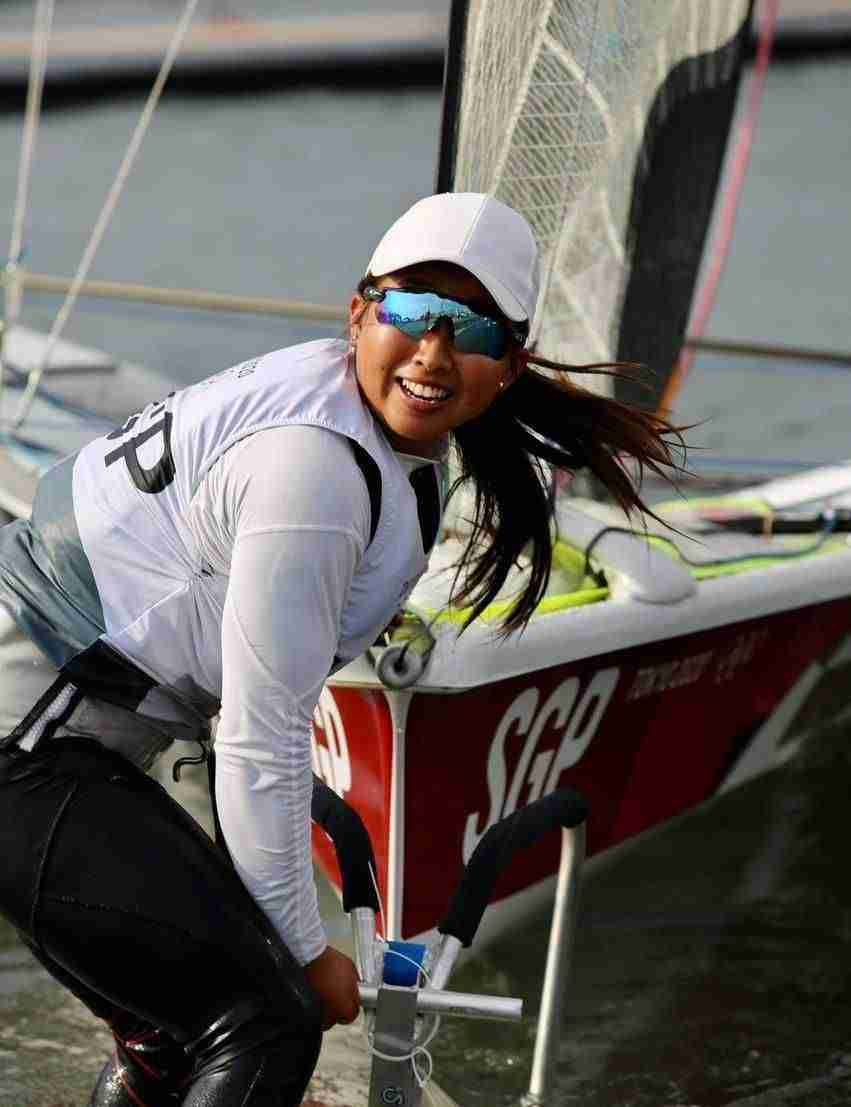 Lim has been sailing since she was 10 years old | Photo: Edwin Tong

Lim started sailing when she was ten years old as part of her primary school co-curricular activities. Winning her first sailing competition at the Optimist Australian Championships in 2009, her career is full to the brim with the sweet taste of victory. She’s won a selection medals at the international and regional levels, with her most treasured achievement being her win at the Optimist World Championships in 2011.

“That will always remain as a special moment, where my Olympic dream was first ignited,” she notes. “I still vividly remember, out at sea when news broke that I’d ultimately won, my coach videoed and asked me: ‘Tell us how much you have worked for this?’ I can still recall how speechless I was; it felt like every single moment of effort, sacrifice, and failure was worth it.”

Going forward, what does Lim think her future holds? She says that she doesn’t have any specific aspirations in mind, although she does comment on how things might pan out for women in the sport more broadly. “I actually think sailing is moving towards greater gender equality over the years…female representation is moving in the right direction, and it’s truly exciting stuff.” 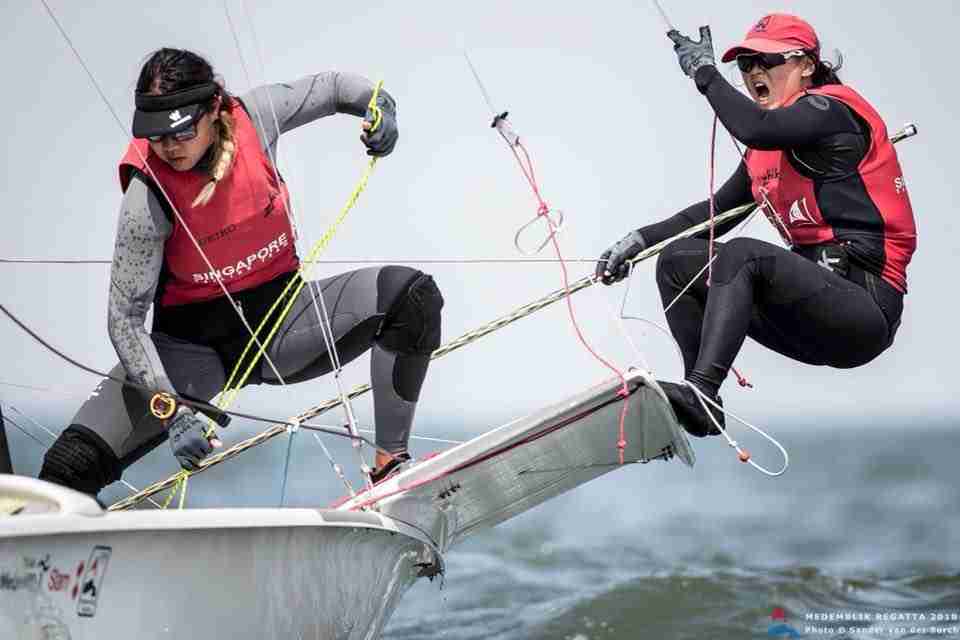 “The competition that concluded two weeks before was a disaster for me, so being able to win a medal at such a prestigious event was redemption,” she says.

Khng started sailing when she was ten years old, as part of a school holiday programme that her father enrolled her in. That’s when her love for the sport began to bloom; its capacity for liberation is something that she admires in particular.

“I love the freedom that I feel when I’m out on the water. Feeling so small compared to the vast body of water makes me have a lot of respect for mother nature,” she notes.

One of the highlights of Khng’s career was her participation in the Rio 2016 Olympics, where – alongside her partner Sara Tan – she came 15th overall in the 49erFX category. 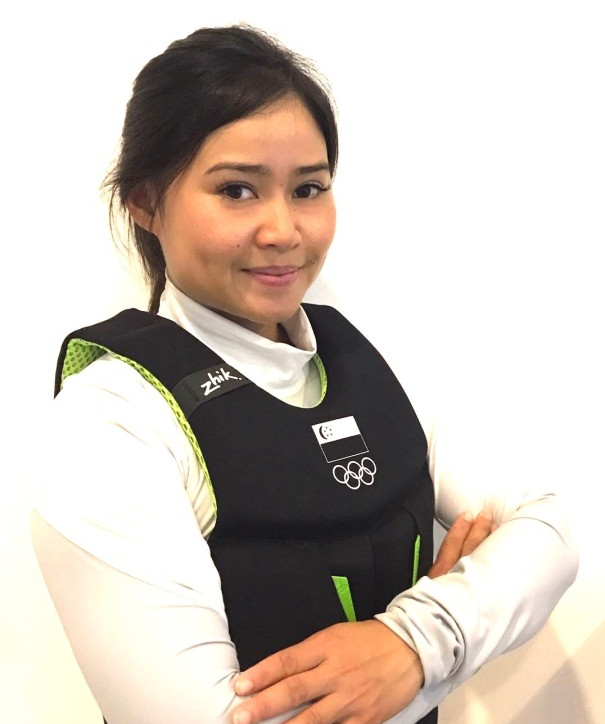 “I had to be in full focus mode all the time, and guess what? So was everyone else.” She points out that there was essentially no room for error; one wrong move or tactical blunder could make the difference between winning gold and winning nothing at all. Her takeaway was that consistency is always key. “It’s not about doing something extremely brilliant out on the water but ensuring that mistakes made are minimised.”

Khng has suffered numerous injuries throughout her career, including an MCL (a ligament in the knee) tear, a rib injury, and a finger fracture during the 2019 World Championships that left her unable to qualify for the Tokyo 2020 Olympics. “Being able to bounce back and have the confidence to train at an intensive level to prepare for my competitions was challenging,” she says. Moreover, she’s often found it hard to fund her sailing career, forcing her to invest heaps of energy into fundraising and writing to sponsors.

Nevertheless, she fights on, and her main ambition now is to compete in the upcoming Paris Olympics in 2024. Her words of advice for prospective sailors? “Always find good sources of motivation because you’ll need it most on challenging days. So, on days when you feel like giving up, use that source of motivation to keep you going.” 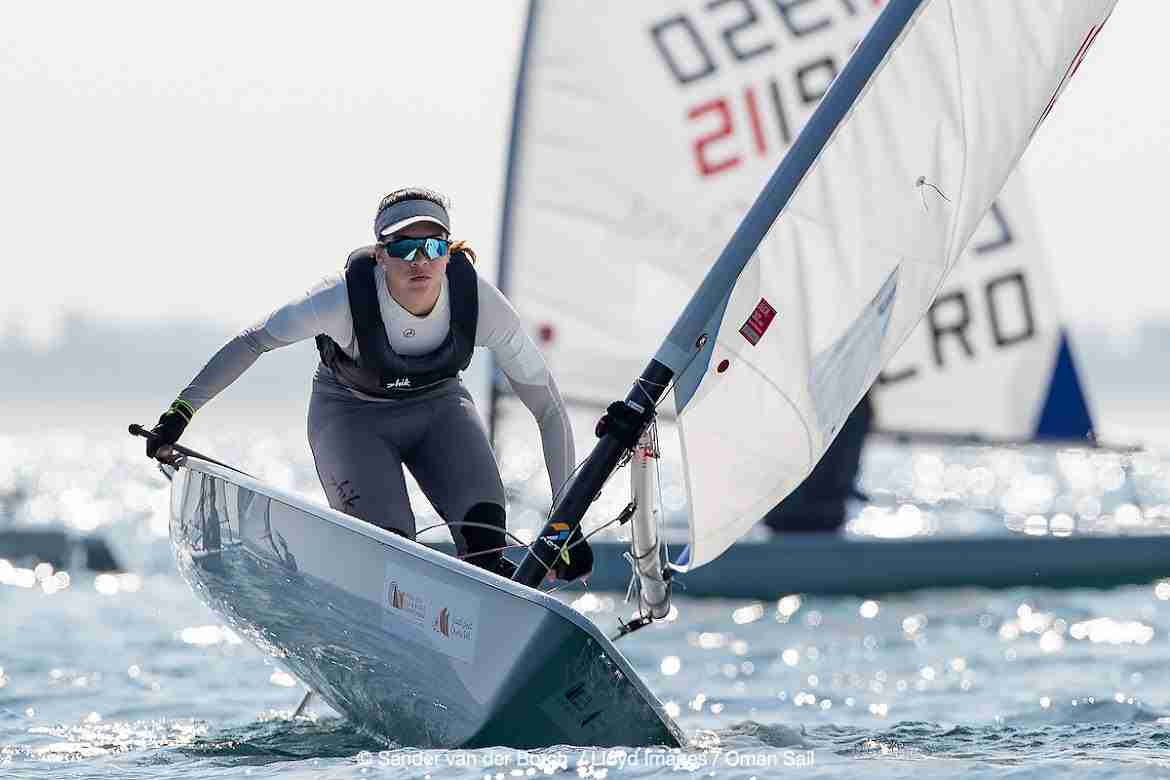 It was the medal race at the 2021 Mussanah Open Championships, and things weren’t looking good for Stephanie Norton. Hindered by a slow start, she found herself at the back of the fleet as she neared the windward mark. In a make-or-break contest that her Olympic qualification prospects rested upon, she faced the possibility of failing to qualify.

“I remember trying to stay calm since there was still another loop left and the wind was quite patchy,” she says. “I was trying to focus on keeping the boat fast and looking for pressure.”

In the face of tough competition, Norton fought back and prevailed. Finishing third overall, she sealed a spot at the Tokyo 2020 Olympics, becoming Hong Kong’s first female dinghy sailor to qualify via a competitive route since 1996. It was a defining moment in her career.

“Qualifying and competing at the Tokyo Olympics so far has been the highlight,” she notes. “Whilst I wasn’t able to perform as well as I would have liked, it really gave me a taste of the competition…and how much I need to level up my game to compete at the top.”

Norton loves sailing for its variety, alongside the fact that it’s given her the opportunity to travel the world: “every day is different; whether that be the wind direction, strength…or even the scenery — so it never gets boring,” she adds.

However, like many other women sailors, discrimination has been part and parcel of her experience with the sport. Norton recalls that she’s sometimes perceived as lacking strength or experience when sailing on bigger boats just because she’s a young woman. “This means them not giving you a bigger role onboard, and it’s quite boring being the extra weight,” she contends. Norton emphasised the importance of experienced sailors giving women the chance to try out different roles and hinted that getting more women involved in the sport was crucial.

“I think more people would be interested if they knew how to get started and are encouraged in a positive way to try,” she suggests. “I’ve noticed many of the yacht clubs promoting female involvement in the sport, which is very exciting.”

In the months ahead, Norton hopes to medal at this September’s Asian Games, and she’s looking forward to events on the European circuit like the Princess Sofía Trophy in Palma: “I want to push myself to do the best that I can and see where this path is going to take me.”