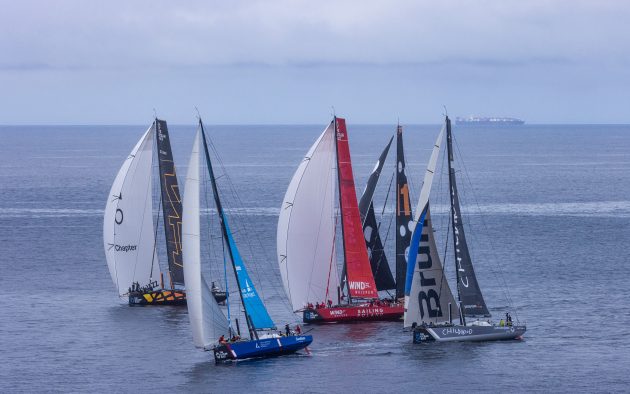 Just a handful of seconds separated the top two in the Ocean Race Europe Leg 1 in the VO65 class, while the IMOCA60 class came down to the wire too

The opening leg of The Ocean Race Europe came to an incredibly close conclusion Tuesday 1 June in Cascais, Portugal with the winners in both the VO65 and IMOCA 60 classes decided only in the last few moments of the four-day passage from Lorient, France.

In the one design VO65 class, The Austrian Ocean Race Project, skippered by Gerwin Jansen (NED), pulled off an impressive come-from-behind victory to edge out Rokas Milevičius’ Lithuanian entry Ambersail-2 by an amazing six seconds.

“It’s crazy that we won this super-intense race,” Jansen said from the helm, moments after crossing the finishing line. “Did you see that? Four boats in a row. What a wild race. We are super-happy!”

Later, on the dock, he said: “We are the newbies, the young team, not that much experience… The last 30 miles were so intense, it was unbelievable. We just kept on fighting and this was the result!”

A further 15 seconds behind in third was Dutch skipper Simeon Tienpont’s Team Childhood I and the full seven-boat fleet finished within six minutes of the leader. 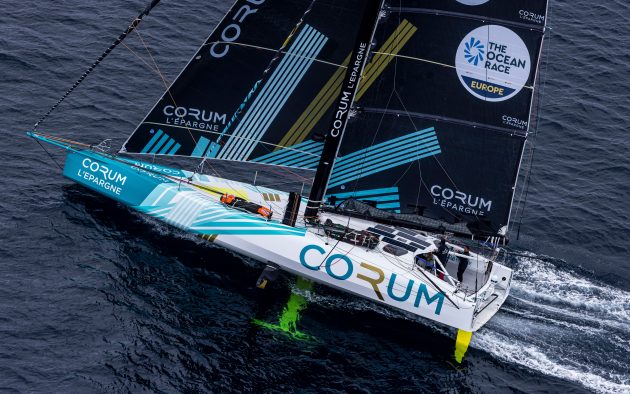 “It was an intense race… and we knew that everything could be decided here like everything can be decided in Alicante and later on in Genoa for the race final,” Troussel said. “Anyway we’re really happy with that victory, we fought very hard and the finish was magical for us.” 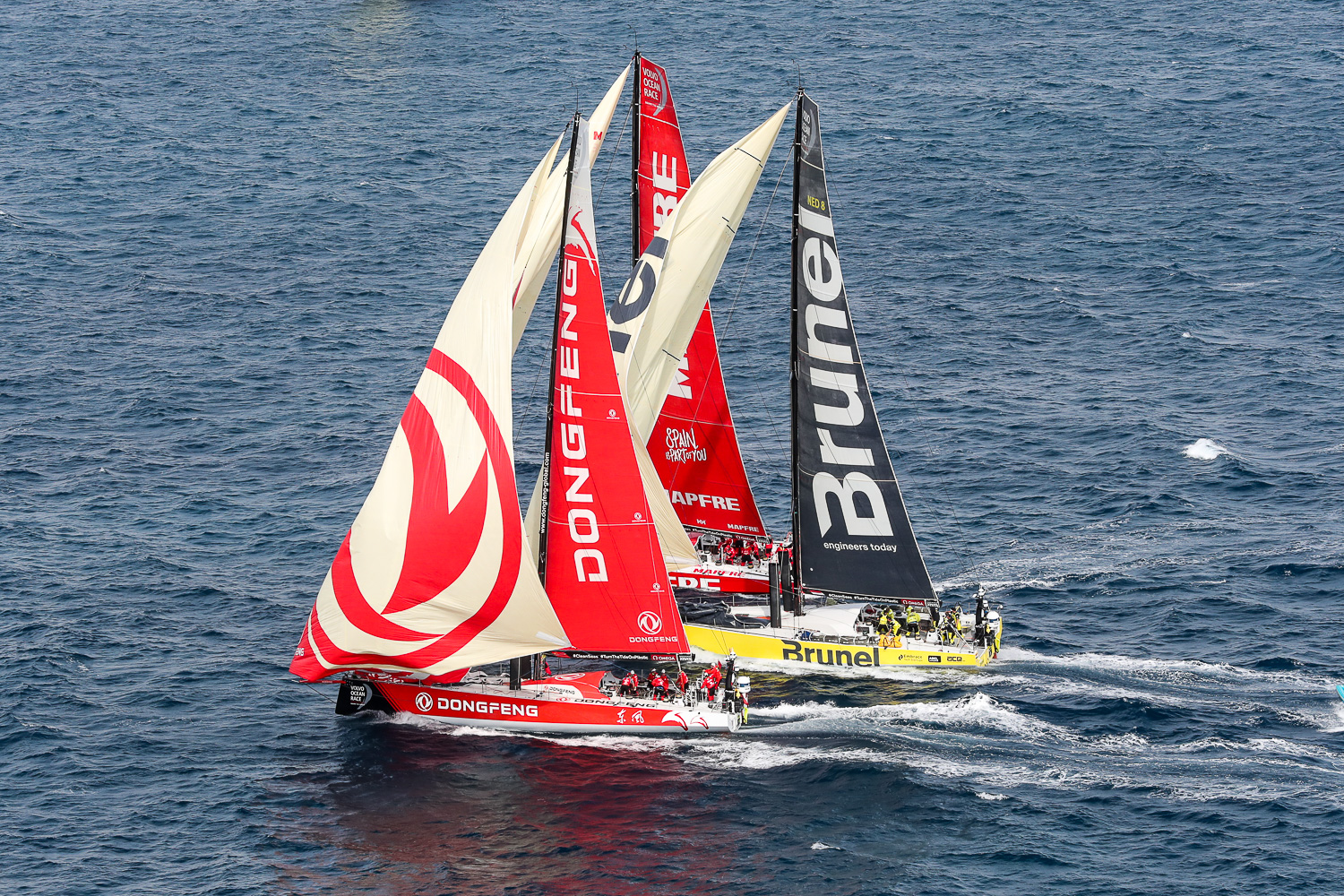 On Saturday 29 May, the Ocean Race Europe will set off for the first time ever and will see 12… 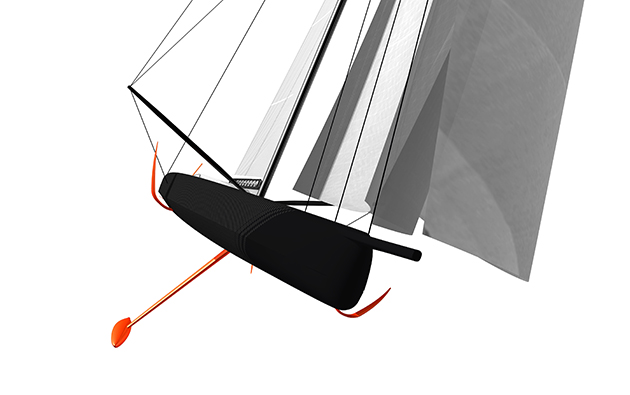 Monday’s stint of high-speed, straight-line reaching back from the Atlantic turning mark had continued overnight for both classes, but at around 0600 UTC Tuesday, the entire fleet started to compress as the IMOCA 60 and VO65 crews began to strategically position themselves to round the large race exclusion zone which blocked their path to the finish line.

In the VO65s, long-time leader Mirpuri Foundation Racing Team was alone in choosing the northerly route, while the rest of the class squeezed together into a tight gaggle to round the south-west corner of the zone. 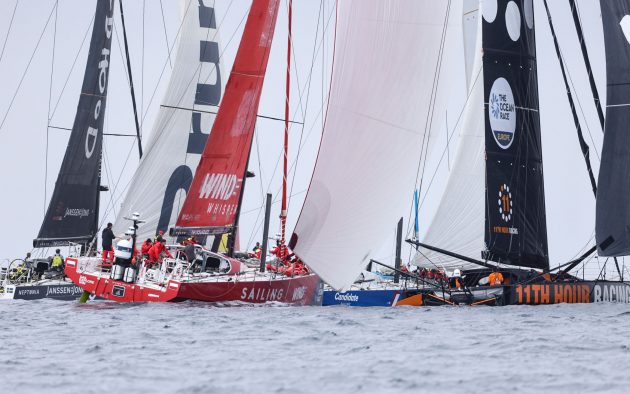 The final 40 nautical miles (nm) of the leg saw the VO65s in the south racing line abreast with the leader board positions changing incessantly, seemingly with every new gust of breeze.

Things got even more unpredictable in the final 15nm as the fleet slowed in easing winds from a cold front sweeping towards the Portuguese coast.

A split amongst the six southerly VO65s, saw Sailing Poland, Team Childhood I and The Austrian Ocean Race Project holding high, while AkzoNobel Ocean Racing (NED), Ambersail-2 (LTU), and Viva Mexico (MEX) gybed away to the south in search of a better angle to the finish.

When the boats converged again in the final two miles to the finish line there was nothing to choose between the Austrians, Ambersail-2, and Team Childhood I as they raced for the line.

In the end it was The Austrian Ocean Race Project, a new team with a relatively young, inexperienced crew, who edged ahead to claim victory over second-placed Ambersail-2 with Team Childhood completing the podium.

It is a testimony to the incredible intensity of the racing in the one design VO65 class that all seven crews finished within just six minutes of each other after more than four days of open water racing.

The racing between the five IMOCA 60s was also a close-run affair with all five teams very much in contention for victory on the final day.

Special mention should be made of the crew of non-foiling Offshore Team Germany – the only non-foiler of the development class being used in the Ocean Race Europe crewed for the first time. Led by experienced offshore racer Robert Stanjek, Offshore Team Germany managed to claw back a deficit of over 100 nm on Monday to take the lead at one point on the final approach to Cascais this afternoon, before ultimately finishing in fourth.

In part this can be attributed to the teams lack of foils that provide a significant speed increase at the right wind angles and in sufficient breeze for them to provide righting moment. However once the wind is forward of the beam or below the mid-teens in strength, the large foils produce significant drag and slow the newer boats.

The decision on which route to take around the exclusion zone played a significant factor in the final IMOCA 60 standings.

Louis Burton’s Bureau Vallee (FRA), Corum L’Epargne, and 11th Hour Racing Team, all looked set to round to the north but a last-minute change of heart from both teams saw them gybe away to the south.

Although this move initially looked costly for the French and American team, it paid dividends for both as they somehow managed to skirt their way around the exclusion zone quickly enough to be able to overtake Offshore Team Germany and Thomas Ruyant’s LinkedOut who had committed themselves to the southerly route earlier.

Next up will the the Coastal Race as part of The Mirpuri Foundation Sailing Trophy on Saturday 5 June and the start of Leg Two, into Alicante, on Sunday 6 June, which is likely to produce very tight racing once again.