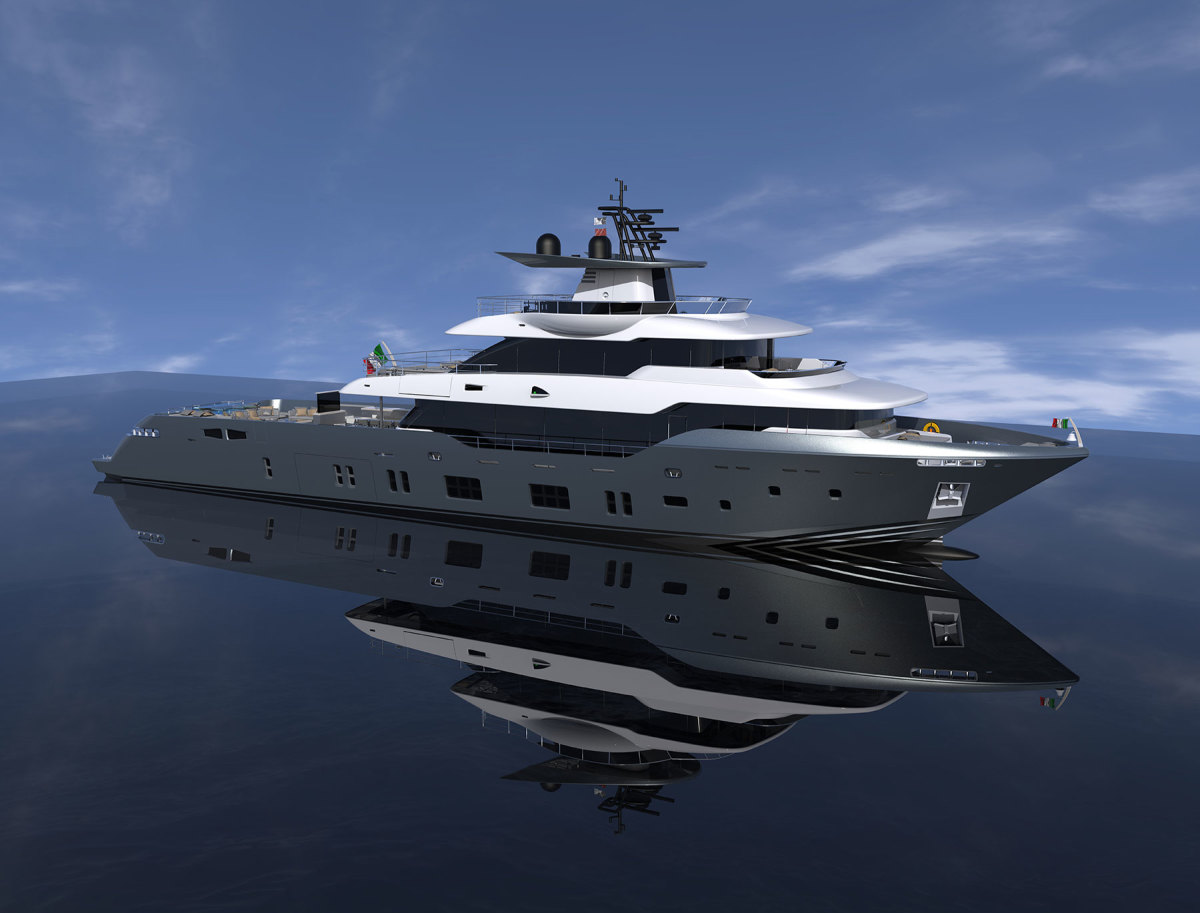 Flagship Construction on Canados’s flagship model of Fast Expedition vessels, the Oceanic Yacht 140 Tri-Deck is well underway. The yacht has been sold to a loyal Canados client who intends to keep the boat based in Cote d’Azur.

While original contract delivery date was set for September 2021, it has been decided with the client to push the delivery back to March 2022 in order to benefit from the new CAT 32B Series which are a direct evolution of the CAT 32 Acert. The Oceanic 140-footer will be the first yacht powered with these engines delivered in Europe.

The 43-meter Oceanic hull #1 is a triple engine configuration that has been engineered to run either at displacement speeds or planning speeds, offering extended navigation possibilities.

The hull design by Canados technical office has been named DHC for “Displaning Hull Concept” for its very specific ability to bring the best of both world, long range at 10 to 14 knots and a top end speed of 25 knots at planning speed. The partially keeled hull has been designed with twin massive steps, triple propeller tunnels and bulb. The keel runs over two third of the hull length to increase stability at slow speed and in following seas. The two steps play two roles, reducing the buoyancy aft to keep pitching movement to the minimum at displacement speeds and compensate the weight of the superstructure installed very much forward, while they will ventilate the propellers at higher speed.

The specific bulb design that has been studied at the Rome tank testing facility (Insean), increases the running surface at slow speed, thus reducing fuel consumption. Above 20 knots, the bulb will partially be out of the water and will also help reducing pitching movements.

The three propellers tunnels where designed to reduce the draft of the yacht that will be limited to 2,10 meters at half load, opening extended shallow waters cruising grounds.

Apart from this all new hull design, the engine configuration is fairly unusual with the two wing 12 cylinders CAT equipped with trolling valves and the center engine’s gearbox equipped with an intercooler. This will allow to run the yacht long range on the two side engines with the center one off without any risks for the gearbox and the side engine injectors. In this configuration, the Oceanic will run at about 10/11 knots with a reduced consumption in the region of 50 liters per hours.

This superyacht will offer an aft deck of about 110 square meters/1184 Sq. feet, with aft Jacuzzi, sun pads, bar, dining room and day head with direct access to the tender bay for a 6-meter tender and plenty of toys located amidship. Underneath the tender bay will be installed a Veem 145 SD gyroscope stabilization system.

The interior of the Oceanic 140-footer is being designed by Rome based Michela Reverberi who designed the latest delivered Canados 888.

The main deck will be devoted to saloon and dining areas with full height windows, galley, captain’s cabin and full beam wheelhouse with integrated Böning bridge.

The lower deck will be shared between the crew quarters to fore and the four guest-cabins, out of which two are gigantic VIPs with queen size beds and private corner saloon.

The engine room aft of the tender bay is accessible from the control room next to which the engineer’s cabin is located. At the transom is a garage with two electric cars that will be unloaded to the dock with the help of an Opacmare Transformer. When emptied from the cars, this space will be turned into a beach club.

The upper deck is fully devoted to the owner’s suite with a private aft deck and a fore terrace equipped with jacuzzi. The sun deck is equipped with two wing stations, sun pad, bar, sauna and bathroom.

Despite its expedition concept and architecture, the Oceanic 140-footer will come with a mirror finished Awlgrip painting job.