In 2013, the 131-foot Columbus 40M Sport made its debut as a hybrid-powered motor cruiser designed by Hydro Tec. Palumbo Superyachts in Italy has now resurrected the Columbus Sport concept with a new design aesthetic by Luca Dini.

The 164-foot (50-meter) Columbus Sport 50 K2 was built for an American owner who upgraded from the smaller model (the name K2 refers to his first boat, Katia). The athletic looks, scimitar-shaped bow and full aluminum construction remain, but at just under 500 gross tons with more than twice the interior volume.

Overall, the Columbus Sport 50 is a much more imposing beast.

“The point of departure was a profound restyling exercise to bring the 40-meter version up-to-date while preserving its sporty, coupé look,” Dini says. “The new yacht mirrors the personality, style and approach to life of its owner: elegant, refined, attentive and demanding, but also well-traveled and open-minded.”

Dini’s long, lean exterior lines add feline muscle to the low-rise superstructure that looks every bit as racy and spirited on the water as the smaller sibling’s. The Columbus Sport 50 is available in two versions, with or without a sundeck. This owner chose the latter, which highlights the predatory profile.

The relatively conventional exterior layout has alfresco dining on the main and upper decks (the latter partly shaded by a louvered hardtop) and a foredeck with a hot tub and sun loungers.

Wide walkways on the upper deck were a specific request of the owner, who wanted to be able to move easily and safely between the open-air social areas forward and aft. There is room in the forepeak for a rescue tender and personal watercraft. A 21-foot (6.4-meter) Castoldi tender is housed in a side-loading garage aft, between the transom beach club and the engine room.

Accommodations comprise a full-beam master stateroom on the main deck forward, and four ensuite staterooms on the lower deck. Instead of a sixth stateroom, the owner requested a full-size gym between the master stateroom and the galley. That gym was kitted out in consultation with a fitness specialist in New York.

‘The point of departure was a profound restyling exercise to bring the 40-meter version up-to-date while preserving its sporty, coupé look. The new yacht mirrors the personality, style and approach to life of its owner: elegant, refined, attentive and demanding, but also well-traveled and open-minded.’ —Luca Dini

K2 is available for charter, and the classic-contemporary interior styling, also by Dini, was developed to appeal to most tastes. It is bright, clean and coherent. The main woods are pale sycamore and Tanganyika frisé, which provide a contrasting light and dark background to the palette of neutral soft furnishings and leather upholstery.

“The overall effect is sober and simple, but on closer inspection there is a wide range of materials and finishes that add detail and richness,” Dini says.

Marble varieties include cappuccino-colored onyx, alabaster, white lasa for the soles and an elegant white marble with gray veining for the wet surfaces in the guest bathrooms. The owner’s bathroom has a bespoke wood bathtub handcrafted out of white ash by Khis in Estonia. The wood is thermally processed at more than 400 degrees Fahrenheit for durability, and rubber seals are fitted to prevent water loss when the wood naturally expands or contracts. Assembled like a barrel’s pieces, the individual planks of wood are held together by hidden cables.

Onboard entertainment was another important element for the owner. K2 has a system developed with Videoworks for full satellite reception at any angle, and 5G-ready dual modems. The 65-inch screen in the main salon is a Beovision Eclipse TV by Bang & Olufsen that combines 4K HDR OLED screen technology with three-channel sound quality. The multitouch bridge console by Team Italia was designed in collaboration with Palumbo Superyachts and the yacht’s captain.

Palumbo Superyachts returned to Hydro Tec, designers of the Columbus 40M Sport, to develop the semi-displacement hull lines with a pronounced hard chine to ensure stability and motion comfort in a seaway. Further requirements included transatlantic range and a reduced draft just over 7 feet for shallow-water cruising in the Bahamas.

“The technical brief called for optimization of the entire resistance curve, both at maximum contractual speed and at lower speeds,” says naval architect Sergio Cutolo. “Actually, the performance analysis at lower speeds provided particularly interesting results, with a consumption of about 70 litres [18.5 gallons] per hour at 10 knots, which is a particularly good result considering the hull characteristics.”

The Columbus 40M Sport was notable for having diesel-electric propulsion at a time when hybrid technology was still a novelty for yachts. K2, however, has a conventional drivetrain with MTU diesel engines for a top speed of 21.5 knots, a cruising speed of 17 knots and a range of more than 3,000 nautical miles at 12 knots. (Instead of an emergency diesel generator, a battery bank can provide up to six hours of electrical power in a blackout.) Two pairs of Naiad fin stabilizers provide motion control underway and at anchor.

Although the Columbus Sport 50 began life as a restyling exercise, K2 goes beyond the original design in every way. She cuts a clean, edgy figure on the water that sets her apart from the many lookalike superyachts in her size category. 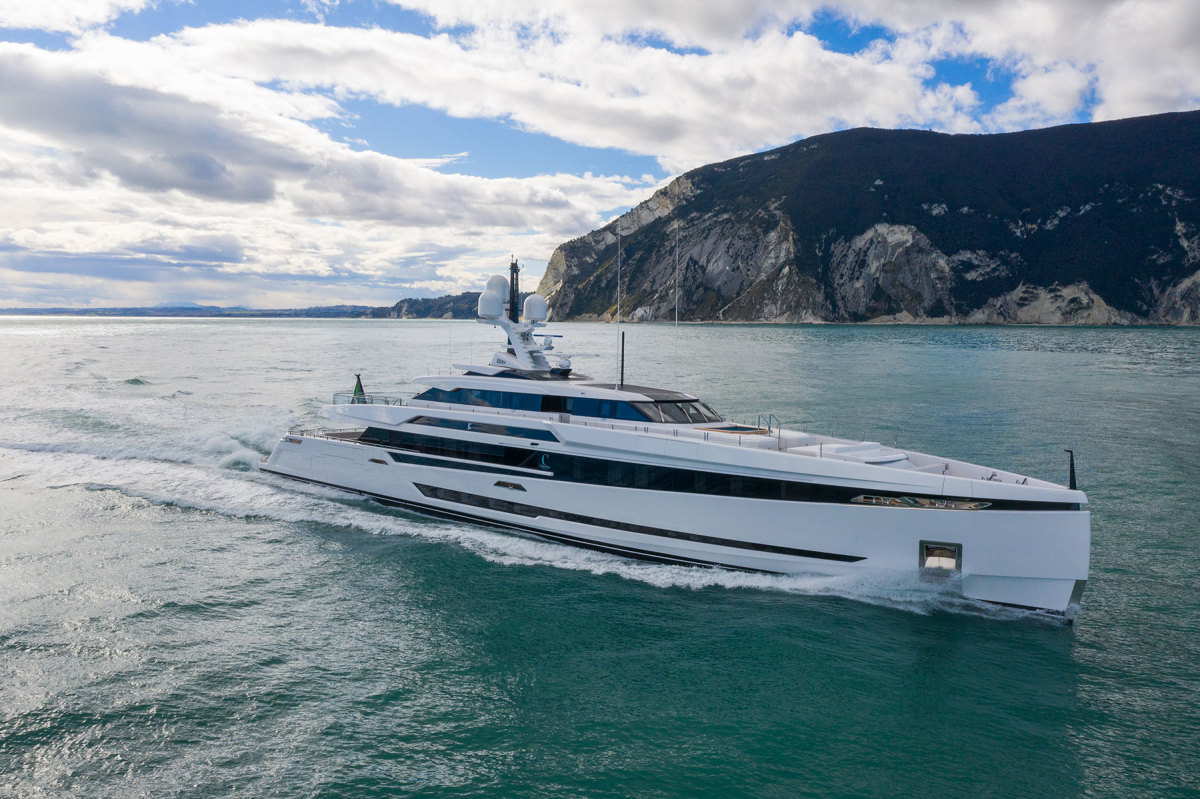