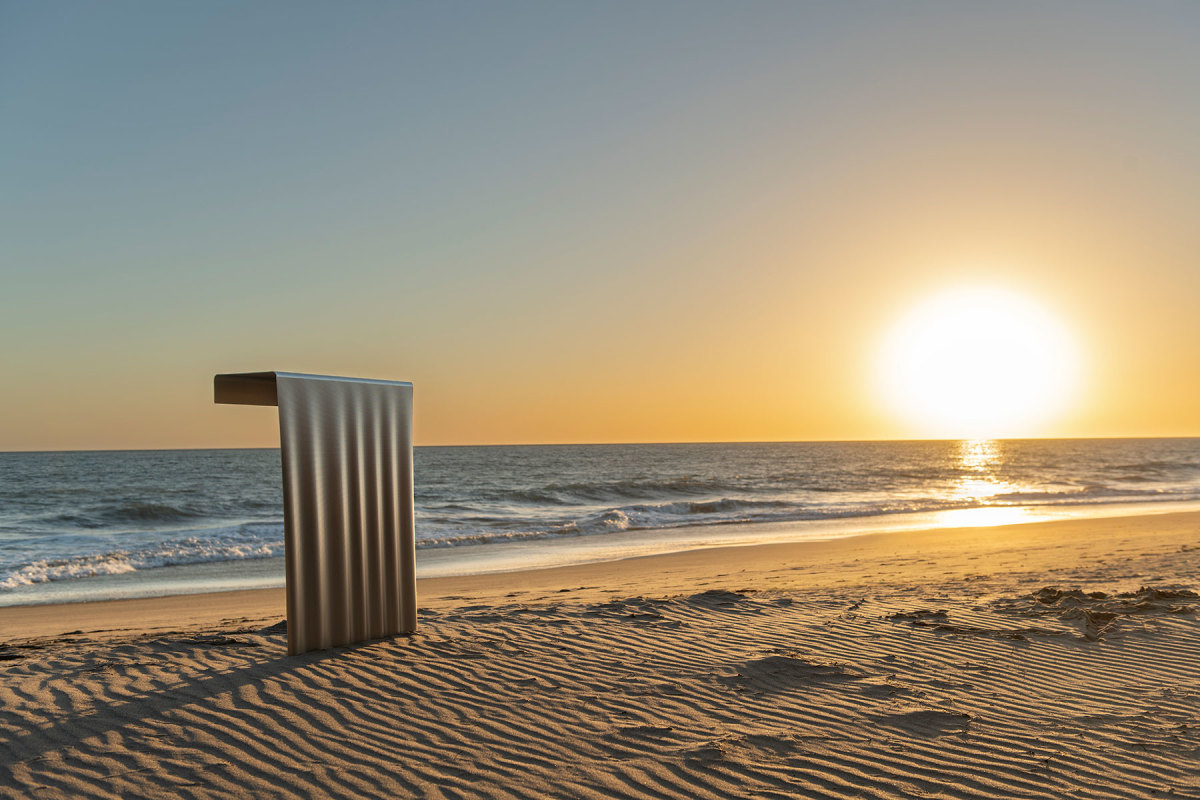 Years ago, Steve Jobs, recognizing the beauty and strength of aluminum, melded function and art with Apple’s thin, light product line of laptops, iPads and iPhones. Like Jobs, Alex Rasmussen, president of Neal Feay, is introducing new applications of aluminum to the design and yachting worlds.

Designers at Neal Feay entwine form, function and technology. The California-based company’s portfolio is a vibrant gallery of artistic creations, architectural surfaces and luxury furnishings, as well as more whimsical items such as a red aluminum spinnaker and a 24-foot-long modular blue wave.

Looking at a medley of multicolored Petit H side tables that Neal Feay created for Hermès feels like viewing a minimalist modern art sculpture, but somehow, the collection also works with a sofa in a living room.

“We are the only manufacturer of colorized anodized aluminum that does what we do,” Rasmussen says. “We conceptualize, design, tool and make finished products, large and small.”

Designers at Neal Feay entwine form, function and technology. The California-based company’s portfolio is a vibrant gallery of artistic creations, architectural surfaces and luxury furnishings, as well as more whimsical items such as a red aluminum spinnaker and a 24-foot-long modular blue wave.

The company’s goal is to offer one-stop shopping, says Brad Babineaux, vice president of development at Neal Feay: “We can do everything under one roof without having to go to subcontractors.”

Rasmussen promotes aluminum as being nontoxic, lightweight, durable, beautiful and sustainable. “Approximately 75 percent of all aluminum ever produced is still in use today,” he says. “And, all aluminum is 100 percent recyclable.”

Rasmussen jokes that his only competitors are artists and craftsmen who work in stone, marble, wood and bronze. He honors Old World materials but sees new and exciting things that can be done with aluminum. He has invited artists, musicians, curators, designers and people from all walks of life to see the Neal Feay process, in person or virtually.

Rasmussen is the third generation in the family business following his father Neal Charles Rasmussen. His grandfather, Nils Faye Rasmussen, a second-generation American of Scandinavian descent, forsook the family farm in South Dakota at age 14 and experimented instead with aluminum, homing in on the more durable anodized aluminum and developing the Anofax process that creates multiple colors on one piece.

The elder Rasmussen worked for Douglas Aircraft in production during World War II. After the war, in 1945, he took advantage of the excess of unused aluminum by setting up a manufacturing business in Santa Barbara, designing and creating anodized aluminum gift items such as cuff bracelets and cigarette cases.

By this time, Rasmussen had changed his name to Neal Faye (his mother’s maiden name) to sound more American. He also changed the spelling of Faye to Feay because of the way it looked. As a young man, he had worked as a “printer’s devil”—a hot-metal typesetter for a printing company—so he was cognizant of how words appeared in print.

“My grandfather exemplified the American spirit of his day,” Rasmussen says. “He was an entrepreneur who had his hand in everything: marketing, sales, design and manufacturing.”

Establishing the Neal Feay manufacturing facility in Santa Barbara was a conscious branding decision. Situated on the central California coast between the Pacific Ocean and Santa Ynez Mountains, the small, chic city, with red-tile-roof Spanish architecture, has long been a popular tourist destination.

“My grandfather always had good taste,” Rasmussen says. “The glamor of Santa Barbara suited him much more than an address in, say, Oxnard or Ventura. He wished to imbue his fledgling business with provenance.”

The Neal Feay studio now occupies a 55,000-square-foot facility in Goleta, a suburb of Santa Barbara. The company long ago moved from its focus on gift items into manufacturing parts for various clients. By the 21st century, 80 percent of Neal Feay’s business was designing and manufacturing high-end aluminum casing for high-fidelity sound equipment.

Rasmussen wanted to branch out into even more creative endeavors, and in the past 10 years has enhanced the Neal Feay portfolio with luxury goods for the fashion, art, architecture, design and yachting scenes. He has come far from his earliest days in the family business.

“I literally grew up at the plant,” he says. “I spent a lot of my childhood hanging around, playing and learning. I started silk screening logos onto aluminum parts when I was 8 years old. By the time I was 13, I was programming machine code.”

When he was not at the studio, he indulged his other passions: sailing and surfing. Today, Rasmussen, Babineaux and several other employees head out weekly to the Santa Barbara marina for a Wednesday evening sailboat race.

Throughout the Covid-19 pandemic, Neal Feay repurposed its machines that were making bracelets and chairs and started making Vyaire ventilator panels. An order for 2,500 of the panels was destined for medical facilities, and Rasmussen personally delivered the first batch.

As always, he stood proudly and creatively at the heart of Neal Feay’s innovation. ◊

This article was originally published in the Fall 2020 issue. 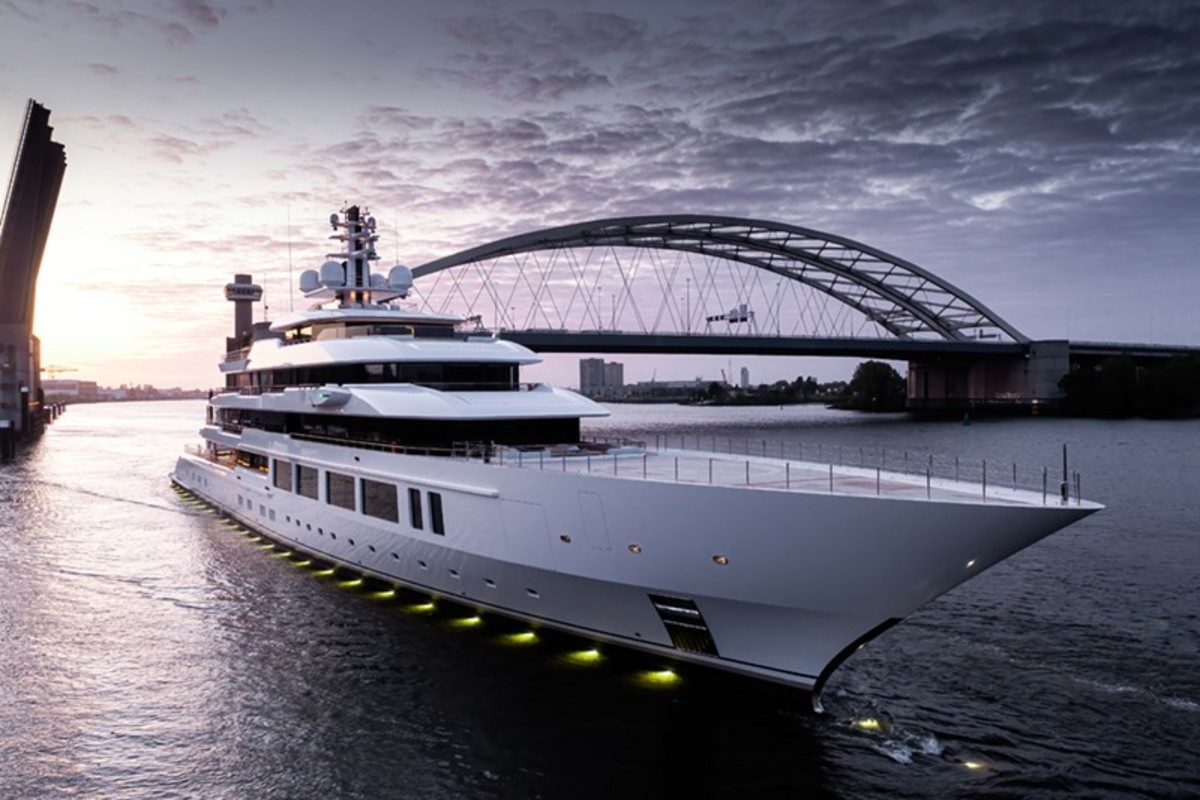