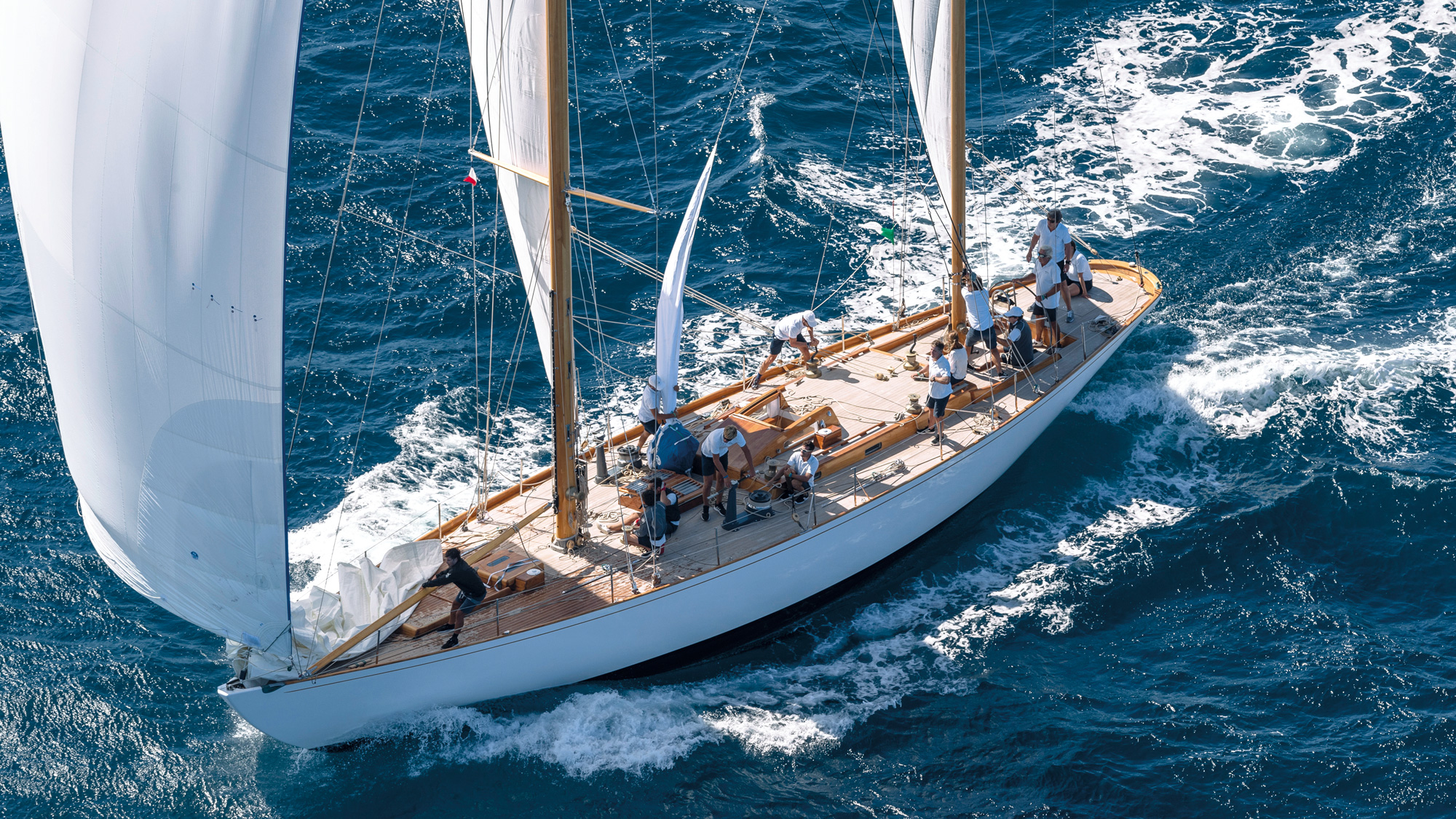 Recluta is a 69ft ketch built for renowned designer Germán Frers to lines drawn by his father some 80 years previously. Helen Fretter reports

The Frers dynasty is responsible for more than 1,300 yacht designs. Germán Frers, having last year celebrated his 80th birthday, remains one of the most prolific and sought after designers in the world. Yet when it came to building a ‘new’ yacht for himself, Recluta, he turned to plans his father had drawn in 1942.

The decision to build was made almost on a whim. Germán was talking with old colleagues and friends, including Tito Szyka, a master boatbuilder – also now in his eighties – who has worked on Frers’ previous classic yacht restorations, as well as Heroina, a 75ft wooden sloop built in the 1990s to a Frers design.

“Actually the whole thing started with a political discussion,” Frers recalls. “We were talking about the elections in 2015. They were very concerned about the situation, and the lack of work. Out of the blue I said, well, if such and such wins the election, there is a window of hope for Argentina, then I would do a project.”He admits, “I didn’t think too much about it.”

However, the decision to build his new yacht developed into something larger than he could have anticipated. His daughter Zelmira, an architect and photographer, began documenting the build process through a series of photographs, which have in turn been published in a spectacular book, The Story Behind Recluta. The build, and the decision to capture it for posterity, prompted a delve into the family’s family history – Zelmira discovering the story of her grandfather, as well as the remarkable story of Recluta, the yacht that nearly never was. 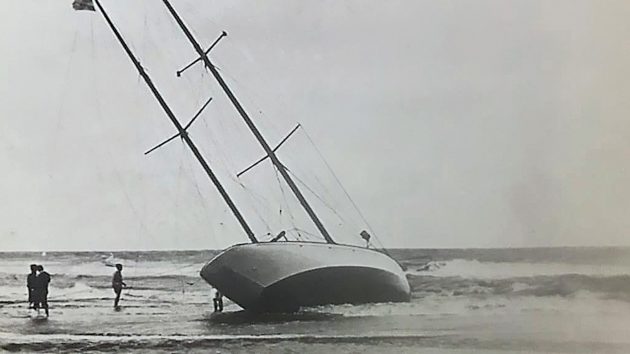 Recluta was originally a Camper & Nicholson-built gaff ketch, launched from Gosport in 1901. In 1940 she sailed to Argentina for new owner Charlie Badaracco. Germán Frers’s father – Germán Frers Snr, and the first generation of Frers designers – designed a new Bermudan rig for the yacht. Badaracco entered Recluta in an offshore race from Buenos Aires to Mar del Plata, but they ran aground during heavy weather in shallow waters off Cabo San Antonio.

The crew was initially able to sail Recluta off, but while doing so a crewmember fell overboard. Tacking back to recover him, Recluta ran hard aground again, and this time could not be refloated. The ketch was driven up the beach in the waves. Once it was evident she could not be recovered, the crew camped on the sands, stripping the newly re-rigged yacht of many of its valuable components over the following days. 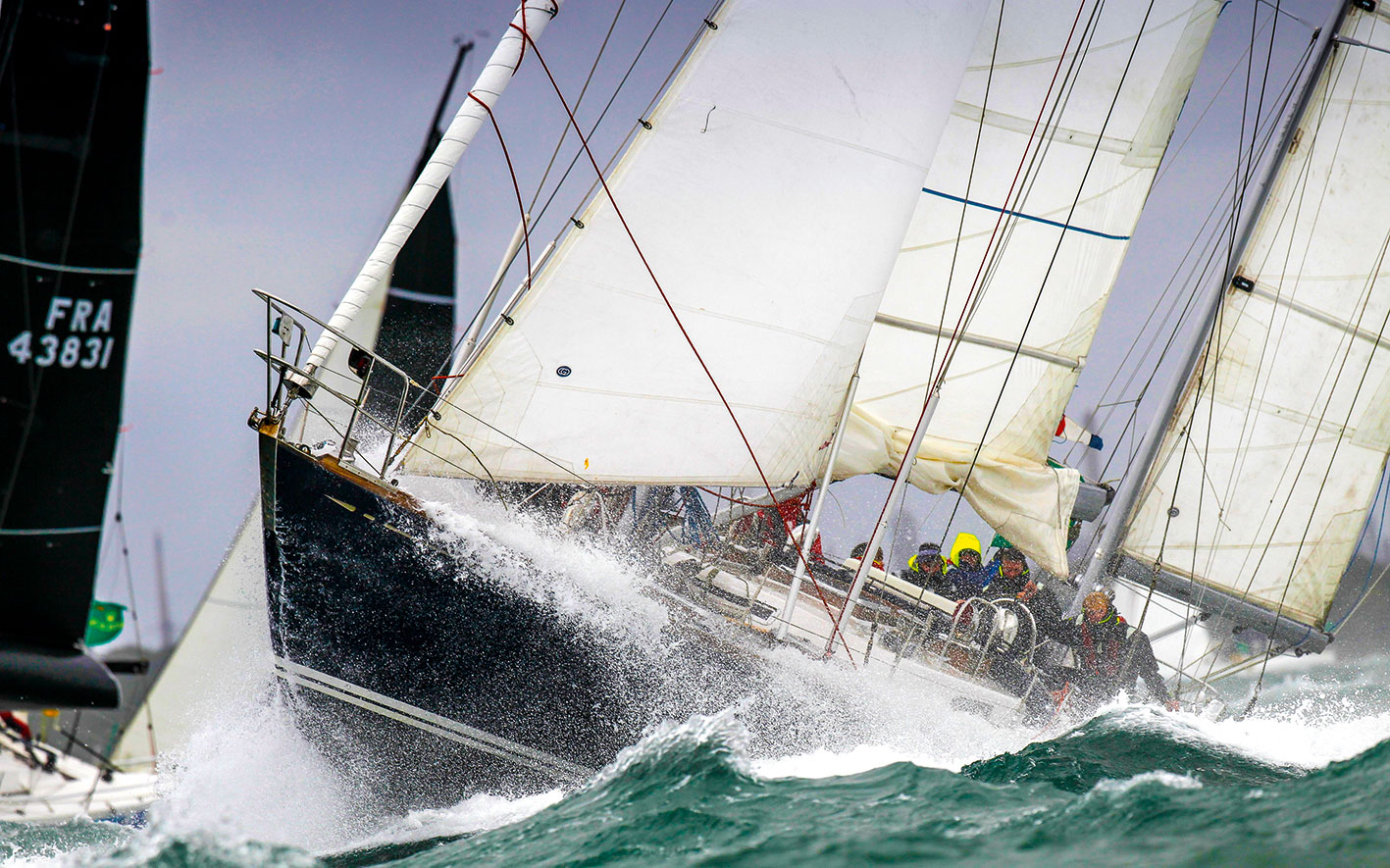 Few yachts are more iconic, or have done more to inspire others, than the late Eric Tabarly’s Pen Duick series.… 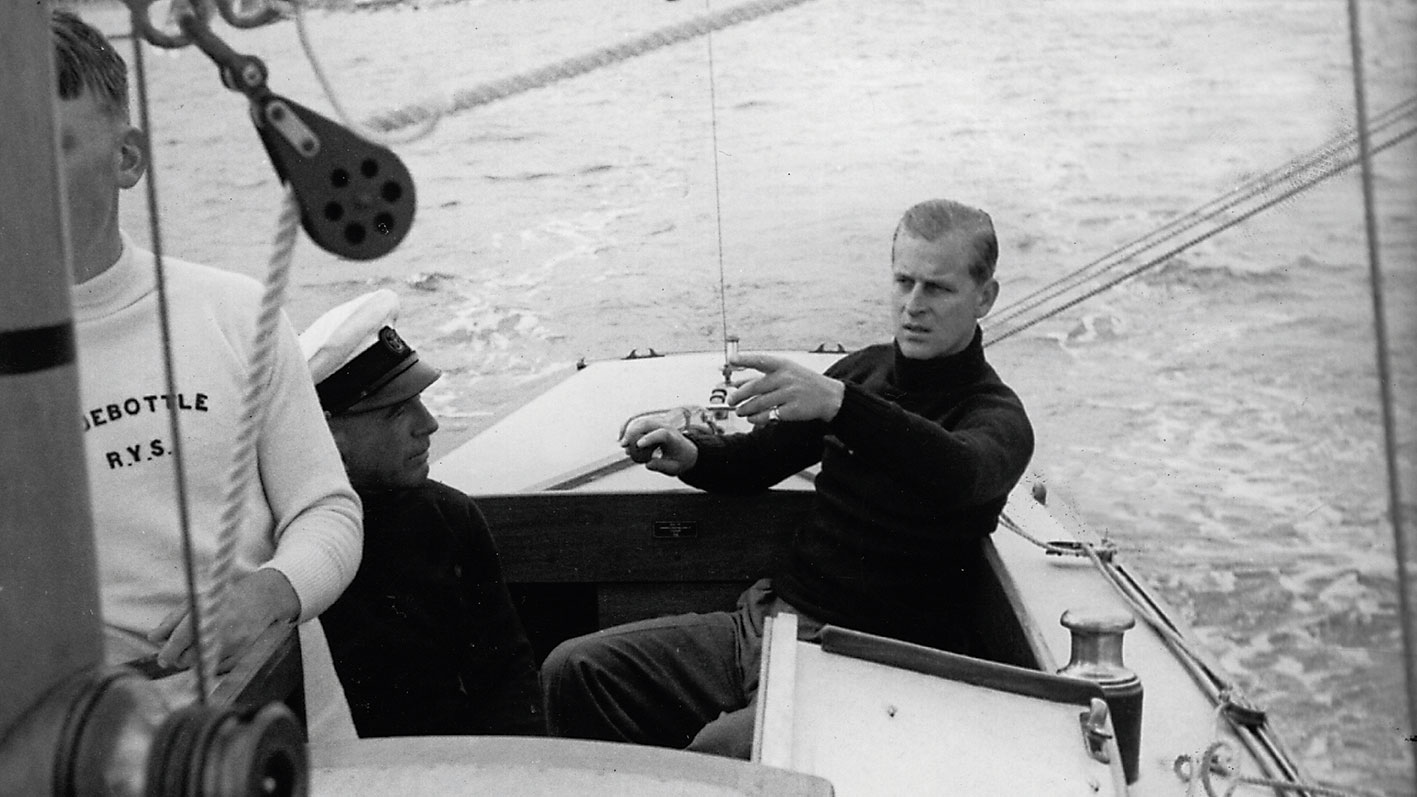 After an 18-month restoration to an impressively high standard, Bluebottle, the Duke of Edinburgh’s boat, is racing again for the…

Full of enthusiasm to build a new Recluta, Badaracco commissioned Frers to design a replacement in 1943, using the salvaged fittings from the shipwrecked ketch. But a shortage of materials during World War II hampered the build.

“During the war in Europe, there was a lack of lead, and of copper,” explains Frers. “The boat was supposed to be riveted in copper, and it was an impossibility to get the materials. So I guess the owner got frustrated and decided not to continue.” 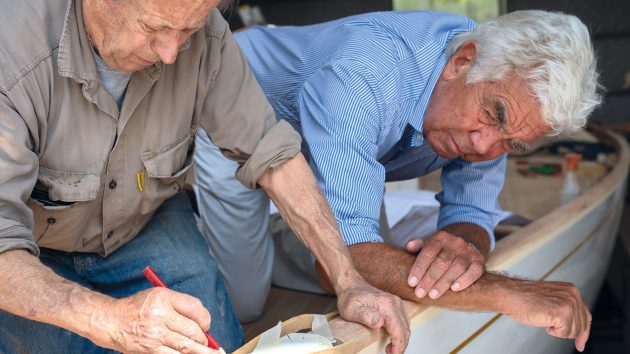 Construction ground to a halt, and the plans for Recluta were left hanging on the office wall.

There would be other Reclutas. Germán Frers Jnr, who was born in 1941, was working on yacht design with his father by his late teens. From the Frers board came more modern iterations named Recluta III, IV and V, which raced at the Admiral’s Cup and offshore for the Badaracco family. But the original Recluta fell into family folklore as the project that never came to fruition.

Decades later, and the 2015 Argentinian elections had sparked a new sense of optimism in the South American country. Germán was as good as his word, and began his new build. The decision to make it Recluta, he says, was natural. “I needed a boat!” he recalls, “And there weren’t any boats left to restore. 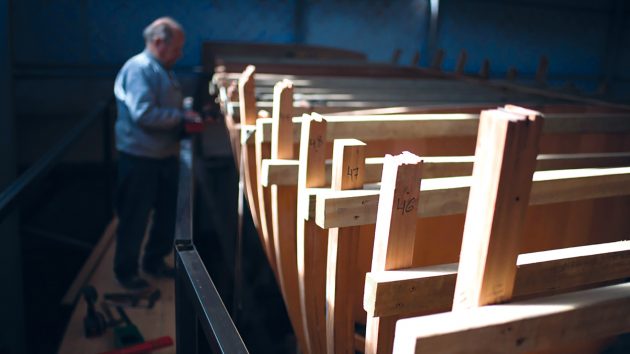 “This is a boat that we talked about when we were young. In the office with my father, he always said what a pity this boat hasn’t been built. It just fit the picture well. There were other designs I could have made replicas of. But this was the right size for me. As I said, I didn’t give it much thought. Never plan anything very deeply!”

The first stage was to convert his father’s 75-year-old drawings to a format his design office could work with. “We digitalised all the drawings, and then we did a 3D model of the boat so we could build prefabricated sub pieces and make models for the frames and every part of the boat,” he explains.

The original designs were followed, but construction processes evolved slightly. 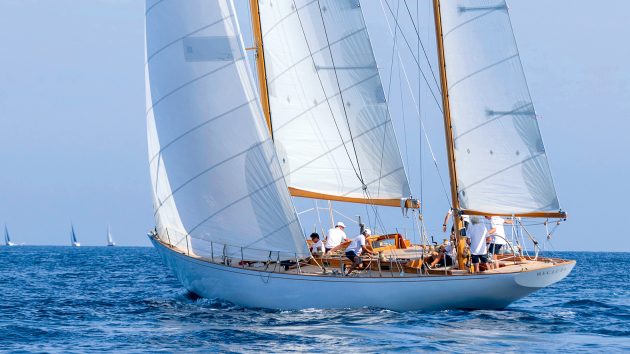 “This boat was all built on laminated frames instead of steam bent. Also the big pieces were laminated because there just aren’t big enough pieces of wood these days available.”
“We used the same woods that were specified originally which are all South American timbers.

“These include viraró, which is a medium hard timber similar to acacia. It was used for the stem, keel, backbone, deck shelf, frames and hatches. And cedro, which is lighter and softer than viraró, and very similar to Honduras mahogany. It was used for planking and deck, cabin side coamings, bulwarks etc.”

The build began with lamination of the keel stem and backbone, and the lead keel in 2015. Progress was sedate, the build managed by a small, traditionally skilled team working out of a boatshed in San Fernando. “There weren’t many people working on it, more like six or seven, so that’s why it took so long. Also I spent a lot of time making plans and they would come with questions to me, and I would say ‘Look at the drawing!’ They’re not used to working like that. They’re like artisans, a little bit bohemian. They love their work, they really enjoy what they do. So all in all, it was a very good experience.”

Recluta was first launched at the end of 2019. “Then we had the pandemic. We had a very long lockdown in Argentina, and were not able to get to the boat for nearly a year.” Finally she was completed, sailed across the Atlantic – direct from Buenos Aires to the Caribbean – and then across to Europe. 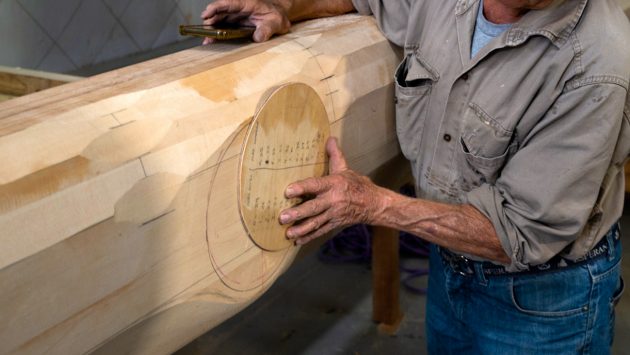 The Sitka spruce mast under construction. A flat winch base for the jib halyard is defined and left proud, before planing in to the final mast shape. Photo: Zelmira Frers

Recluta is largely faithful to the original drawings, although there have been a few modifications to modernise her. “We have changed the interior layout because it was designed for another time – it was designed for 1940s sailing with the crew forward, guests in the middle of the boat and so forth. But in general, I try to maintain as close as possible to the original design,” Frers said. 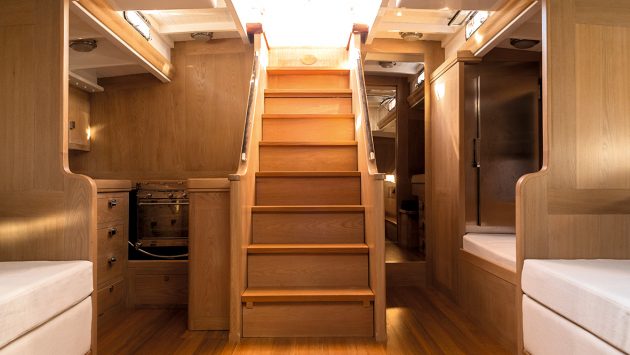 The galley has been brought aft, off the saloon, rather than forward in the ‘crew’ quarters. Photo: Zelmira Frers

“Originally the interior had the galley forward, which I’ve moved closer to the saloon, and there was a navigation room in the back which I deleted. I just have a chart table because today there’s no need to have much space dedicated to instruments, everything is pretty small and can be held in your hands.

“There was also a sort of owners’ cabin aft, which was in a passageway, so I made it a bit more of a private cabin with it’s own toilet and shower. Just little improvements here and there, adaptations to modern life.” The coachroof was also extended and raised a little to increase headroom, but the exterior lines and deck layout are largely unchanged. 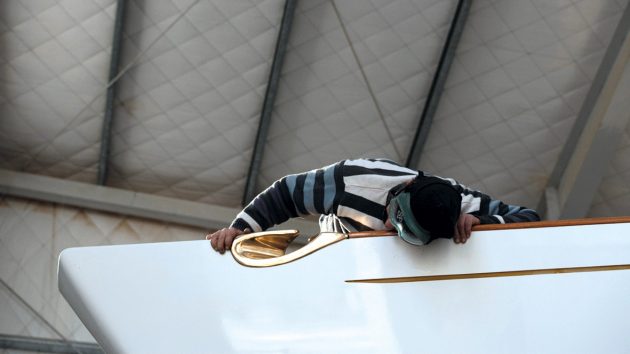 Among the many components that were stripped from the original Recluta as she lay on the sands in 1942 were the masts, but Frers modified the sail plan slightly. “The original spars were saved. The mizzen is still on a boat that used to belong to my father, as the main mast, but it’s not my boat so I couldn’t make use of it. The main mast was fitted to another boat, and I lost track of it over the years. But since [it] is a replica, it didn’t matter too much.

“The new masts are a little taller. She didn’t have much sail area so I increased the height of the main mast and the mizzen in proportion. But it’s very much the same sort of rig and sail plan. A fractional rig on the main mast, and then a ketch, which I feel is very efficient.”

“I thought I was going to keep the boat here in Argentina and so I maintained the original shallow draught centreboard arrangement. But the situation in the country has changed, quite dramatically and not for the best. So I decided to take the boat to Europe and sail it there.” In the end, Recluta competed in a full season of classic regattas last year, including Mahon, Antibes, Cannes, and Les Voiles de St Tropez. 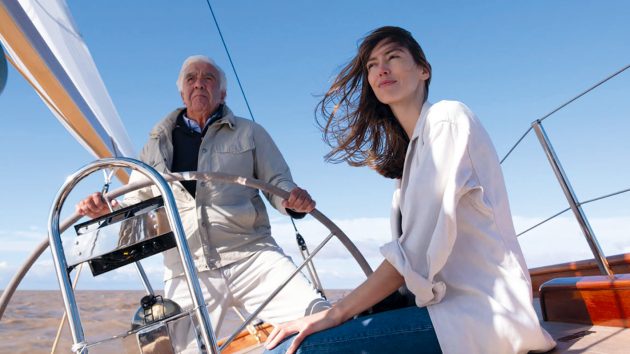 Sailing Recluta remains a family affair. Germán’s grandson (also Germán) crews during racing and was on board for the transatlantic. When competing in classic events the crew includes Germán’s daughter, Zelmira, and son, Mani.

“It’s good to sail with them. I don’t want to take the racing too seriously,” he notes. They also cruise as a family, although, Germán notes, “Recluta is not the ideal cruising boat, she’s a little old fashioned, with none of the facilities that boats have today for ease of short-handed sailing.”

However, one of the great delights of the project for Germán is clearly that it has given him and his daughter Zelmira a newly shared passion.

“She has been cruising with me for years, since she was seven or eight, I think. But she has never been interested in the sailing itself. And now with this boat, she became involved with the construction, and the people. She was interested in the story of my father, who she had never met. It was very emotional.”

Now, Zelmira is a key part of the crew. “She races. She was handling the mainsail last season – and she was pretty good! She really loves the boat, she’s really attached to it and its story. And she became a sailor,” he says proudly.