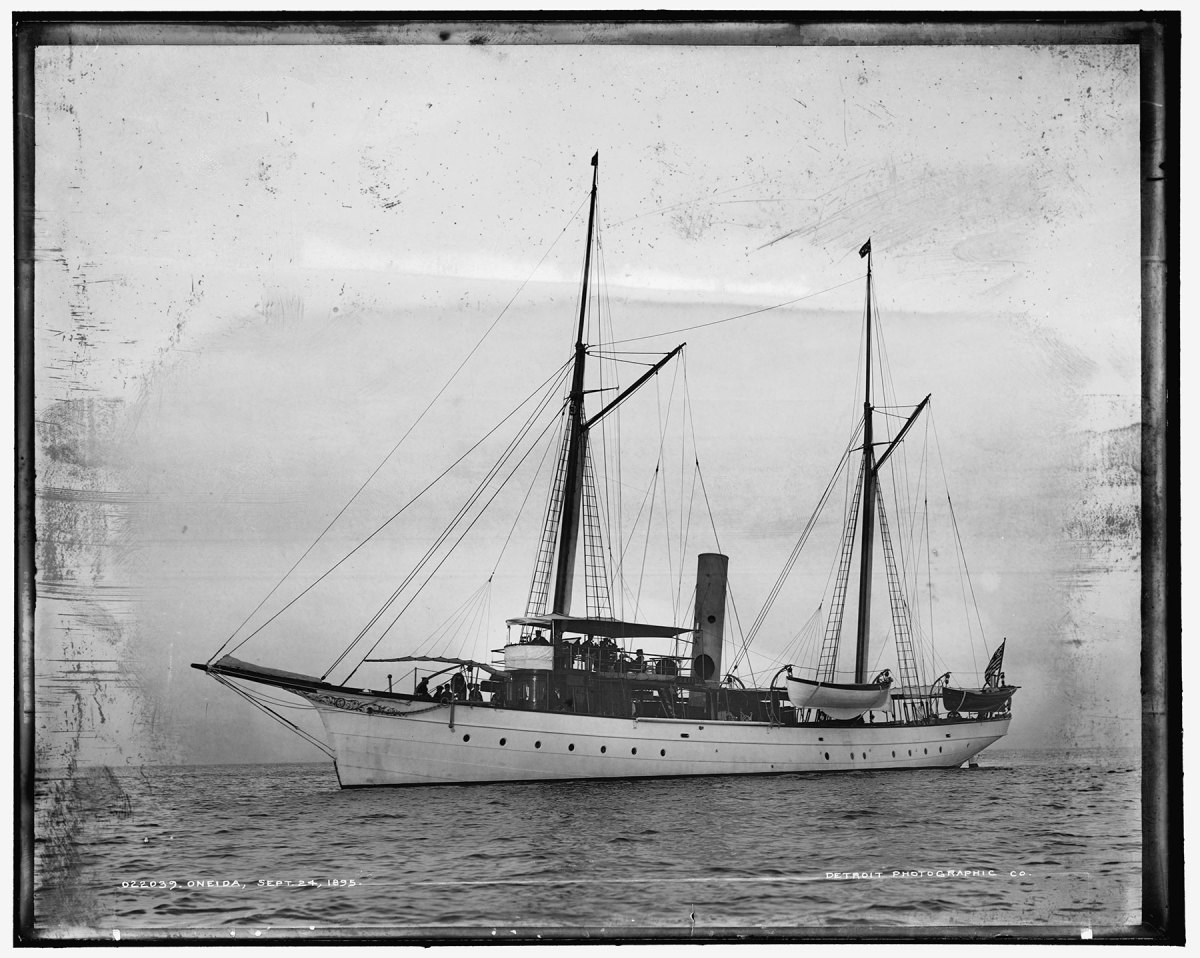 On May 5, 1893, just two months into his second term as president, Grover Cleveland noticed a rough spot on the roof of his mouth. It was near his molars on the left side—his “cigar chewing side.” He tried to ignore it, but by June the lesion had grown so bothersome that he asked his physician, Joseph D. Bryant, to take a look at it. Bryant determined the growth was cancerous and recommended that it be removed immediately.

But Cleveland didn’t want the public to know he was ill. At the time, the nation was mired in an economic depression. If it came to be known he had cancer, Cleveland believed, the stock market would crash.

So began one of the most audacious cover-ups in the annals of the American presidency.

Cleveland decided to have the risky surgery performed on the Oneida, a 138-foot steam yacht owned by his friend, a tycoon named Elias Benedict. Cleveland had logged more than 50,000 miles on the Oneida, mostly fishing in Long Island Sound and off the coast of Cape Cod, Massachusetts. His presence on the boat would arouse no suspicions whatsoever. The surgical team and equipment would be boarded surreptitiously before the president. The operation would take place while the boat cruised from New York City to Gray Gables, the president’s summer home on Buzzards Bay, Massachusetts.

To all the world, it would look like the president was simply sailing to his summer home for a well-deserved respite. It was a simple solution, though Bryant understood it would pose some unusual and potentially dangerous problems. What if they ran into rough seas?

The operation was scheduled for July 1. A team of six surgeons was recruited and sworn to secrecy. Under cover of darkness on the night of June 30, they slipped onto the yacht, which was anchored in the East River off Manhattan. Cleveland joined them later that night.

The setting could not have been more different from a hospital’s surgical suite. Even by the Gilded Age’s gaudy standards, the Oneida was a fabulous boat. Irish immigrant John Roach led her construction in Chester, Pennsylvania, in 1883. He was known for building private yachts and U.S. Navy vessels until he died in 1887—of cancer of the mouth.

The Oneida launched as Utowana and won the Lundborg Cup, an international race, in 1885. Benedict bought the boat, refitted her for comfort as well as speed, and renamed her the Oneida, perhaps to honor the first tribe to side with the Americans in the Revolutionary War. The yacht could run at 13 knots and accommodate a dozen guests. She had an iron hull and two masts. The staterooms belowdecks were plush, though somewhat cramped.

On the deck of the yacht the night of June 30, Cleveland met with the doctors who would operate on him the next day. He sat in a deck chair, lit a cigar and chatted with them for about 30 minutes. He seemed relaxed. The warm night air was filled with pleasant chatter and the smell of fine tobacco. Around midnight, everybody went to bed. One of the doctors, William W. Keen, later reported that the president needed no sedatives and slept soundly through the night. Whether the doctors slept soundly is doubtful.

Bryant had overseen preparations on the Oneida. The yacht’s small, dark salon was transformed into a makeshift operating room. It was cleared of all furniture except the organ, which was bolted to the sole. Then the salon was cleaned and disinfected. A large chair was lashed to the mast in the center of the room. This is where the president would sit for the operation. There would be no operating table. The only artificial light would come from a single electric bulb connected to a portable battery.

The larger pieces of equipment, including tanks of oxygen and nitrous oxide, were quietly delivered to the yacht. Regarding the unusual accumulation of medical paraphernalia, the boat’s crew was told that the president had to have two ulcerated teeth removed, and that he needed fresh, pure air, disinfected quarters and skilled doctors, lest blood poisoning set in.

It would later be reported that the white yacht was repainted green to better conceal it, but that was not true. As Benedict later noted, “Such an act would have created a suspicion which we all wished to avoid.”

The Oneida set sail the following morning after breakfast. The weather was perfect, and, much to everyone’s relief, the water was calm. As the yacht entered Long Island Sound, the mood on board turned serious. When Bryant excused himself to join the other doctors belowdecks, he called out to the captain jokingly, “If you hit a rock, hit it good and hard, so that we’ll all go to the bottom!” Nobody laughed.

Shortly after noon, Cleveland went to his stateroom and stripped to his underwear. Then he walked into the salon. All but naked, the president took his seat in the chair. His legs were stretched out, and his head was tilted back. He looked as if he were trying to catch a nap.

Pillows tied to the chair helped to hold him in position. The doctors took their places. One of them offered a brief prayer. Using a combination of nitrous oxide and ether as anesthetics, the doctors removed the tumor, along with five teeth and much of Cleveland’s upper-left palate and jawbone. The operation lasted 90 minutes. The procedure took place entirely within the president’s mouth, so that no external scars would exist.

The Oneida stayed at sea for four days, until Cleveland was strong enough to walk ashore unaided when the boat docked at Gray Gables. While the president recuperated at his summer home, rumors began to spread that he was suffering from cancer—specifically oral cancer, a disease similar to the one that had killed Ulysses S. Grant eight years earlier.

On the evening of July 6, a reporter for the United Press news agency managed to corner Bryant on the porch of Gray Gables.

“From what is he suffering?” the reporter asked.

“He is suffering from rheumatism, just as it was reported this afternoon,” Bryant answered. “Those reports were correct.”

“Then, doctor, the report that he is suffering from a malignant or cancerous growth in the mouth and that an operation was necessary and had been performed to relieve it is not correct?”

“He is suffering from the teeth,” Bryant said. “That is all.”

And so the next day, the papers dutifully reported that Cleveland was suffering from nothing worse than a toothache, and the nation was reassured.

About two weeks after the surgery, Cleveland was fitted with a vulcanized rubber prosthesis that filled the cavity in his mouth. Without it, his face was misshapen and his speaking voice was practically unintelligible. When it was in place, his appearance and speaking voice returned to normal.

Cleveland eventually recovered fully, and the truth about his operation would not be known until 1917, nine years after he died, when Keen published an account in the Saturday Evening Post.

The ultimate fate of the Oneida is unknown. Around 1914, Benedict sold the yacht, which was rechristened the Adelante and converted into a towboat. During World War I, the U.S. Navy commandeered Adelante to set up a network of maritime radio stations along the Maine coast. After the war, she went back into service as a towboat, operating out of New York under the names John Gulley and Salvager.

By 1941, the boat, once one of the grandest yachts in the world and the site of a unique episode in American history, had been abandoned. Presumably, she was sold for scrap.

Keen preserved the tumor that was removed from Cleveland’s mouth, and subsequently donated it to the Mütter Museum at the College of Physicians of Philadelphia, where it resides to this day.