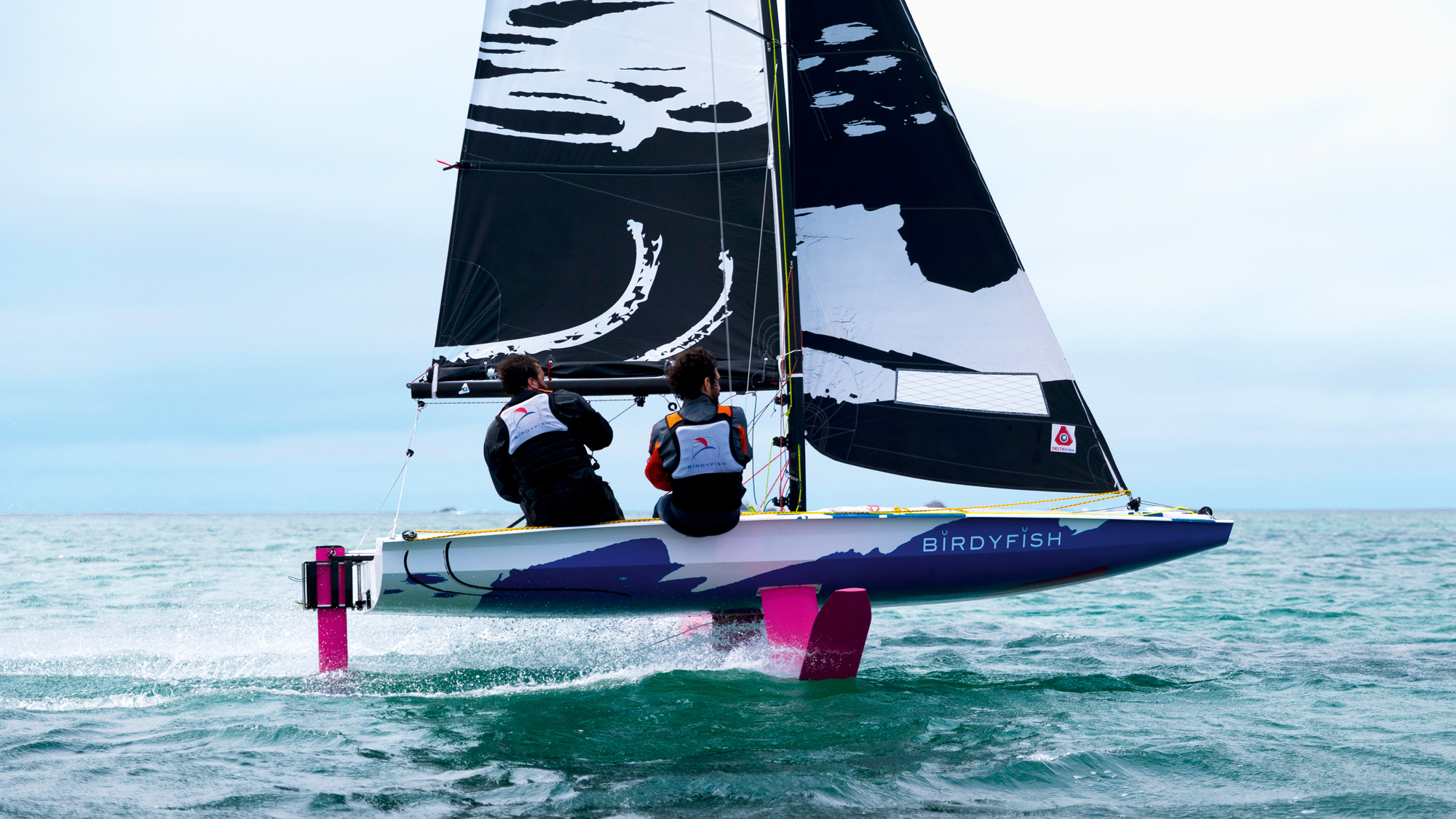 The BirdyFish is a dinghy that aims to make foiling accessible to sailors of all levels. François Tregouet took it for a test sail to see if it really does bring foiling within reach

Based on an engineering school graduation project, three young Frenchmen have created the BirdyFish, a dinghy that aims to make foiling accessible to everyone.

BirdyFish is the story of a sailing start-up, something western France does well. Near Nantes, Jean-Baptiste Morin, Pierre Rhimbault and Alban Satgé were not yet 25 years old when they started out to create a new class of boat. Foiling designs fascinated them, from the Mini Transat small yachts to IMOCA 60s, but they wanted to make flying on the water easier.

Ambitious but realistic, the trio focused on the business and management of the project, and turned to specialists for key areas. Naval architect Etienne Bertrand, well known for his work on the Mini, was commissioned to design the BirdyFish, whose beamy bow is reminiscent of the 6.5m Mini ocean crossing scows.

With their personal savings and a €10,000 grant from a foundation for young entrepreneurs, they built a prototype. Three years later they’re on the verge of finalising a €250,000 fundraising operation and moving to 600m² premises to scale up to mass production.

While the hulls are subcontracted a few kilometres south, the foils are built in Nantes, in-house, a key factor in controlling the quality of these essential parts. 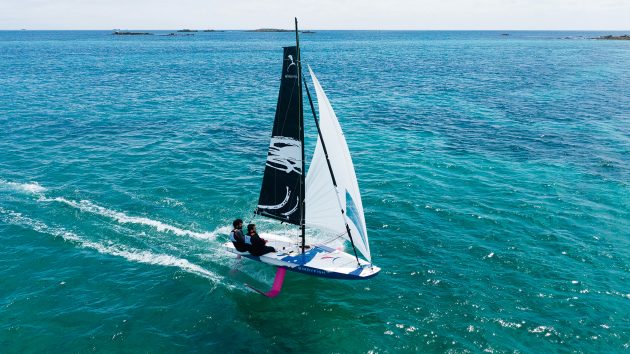 Foil design was entrusted to a master of the art, Jean Baptiste Behm. With their J-shape, the foils create maximum lift when fully deployed but remain quite simple to retract. The carbon foils weigh 10kg each and are symmetrical, so can be used on either side of the boat. This simplifies production and after sales service.

Also with simplicity in mind, the position of the foils is fixed, without any adjustment. Rudder rake can be adjusted but to enable good control of the helm the rudder profile is not extreme.

A longer rudder chord means a little more drag but also more tolerance, and less risk of losing control. Sailing at low speeds with a smaller rudder surface area would give no feel to the tiller, making it much more difficult for beginners. The development of the Birdyfish, and refining that balance, took more than two years.

The hull is made of a glass-polyester sandwich, weighs 93kg and has four watertight zones making it unsinkable. The mast is aluminium and, once the foot is unpinned, can be dropped backwards with a crewmember controlling the descent with a halyard in hand. 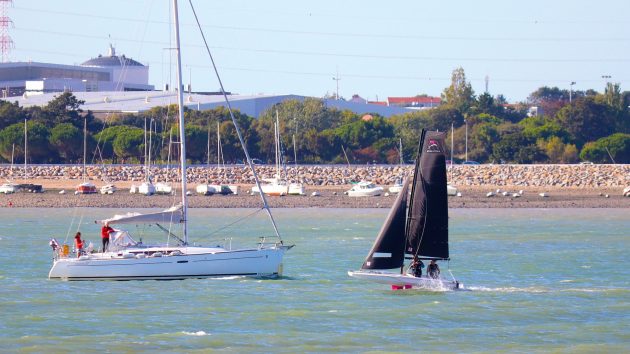 The maximum speed recorded by a BirdyFish is 22 knots (like a Class 40 but 40 times cheaper!). Photo: MULTImedia/François Tregouet

The BirdyFish is limited to three sails to keep it simple. There’s no trapeze either, the righting moment being entrusted to the foils. This is also a safety choice because, at high speed, any fall could be dangerous. Two crewmembers sit on the gunwale, or move slightly outboard upwind with their feet in the straps.

A major evolution in the development of the BirdyFish means there is also no longer a daggerboard. The first boats sold played their part as pioneers, but it turns out that the foils, although symmetrical, generate more anti-leeway effect than expected. Removal of the daggerboard and its box made the Birdyfish’s cockpit even simpler. 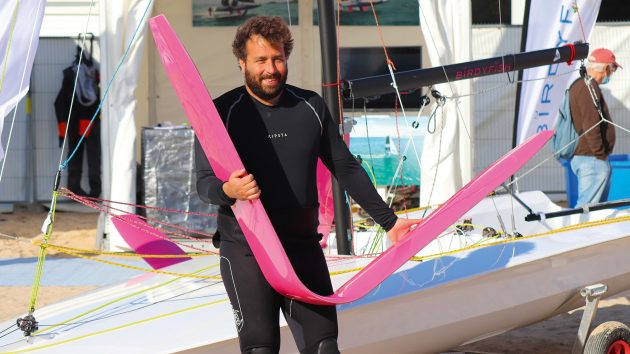 Each foil weighs just 10kg (22lb) and they are symmetrical on port and starboard. Photo: MULTImedia – François Tregouet

Officially, the BirdyFish will fly in upwards of 12 knots of wind. But with a trained crew, the boat can take off from 8 knots. Finding the right angle, producing just the right amount of power at the right time to get the hull out of the water will show the difference between a novice crew and one that already has a few hours of flying experience.

Rusty from decades of cruising on non-foiling boats (and having long forgotten my 420 and Mini years), for me trying the BirdyFish felt like a good test of its genuine accessibility to all. I returned to the shore reassured about my abilities – but more importantly blown away by the extraordinary sensations of flight.

Off the beach at La Rochelle the BirdyFish flew very fast at about 15 knots in a wind oscillating between 10-15 knots. High speed means constant vigilance is essential: the transparent Mylar window in the jib helps with visibility. 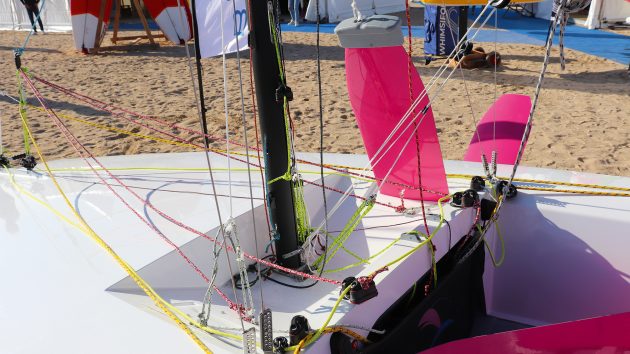 There are no more lines at the mast foot than on a classic dinghy: simple. Fittings are attached so as not to compromise watertight zones. Photo: MULTImedia – François Tregouet

As there are no flaps to adjust the boat’s trim it’s the crew’s position that needs to be tweaked. Sitting on the windward side of the boat, well wedged against the shroud, I was quietly enjoying the stability of the boat – its tolerant foils and T-shaped rudder do a remarkable job – when Jean-Baptiste Morin handed over the helm.

I was instructed to use as little helm angle as possible, instead using the mainsheet as an accelerator first, then as a damper. Very quickly, the miracle happened, and we took off! Soon we were flying, perfectly dry just above the chop.

I quickly learned that to remain foiling requires being very sensitive to movement. Rudder correction angles must be as small as possible. There’s no question of moving the whole tiller, instead Jean-Baptiste advised I keep my tiller hand close to my body and only make small movements using just the span of my fingers. 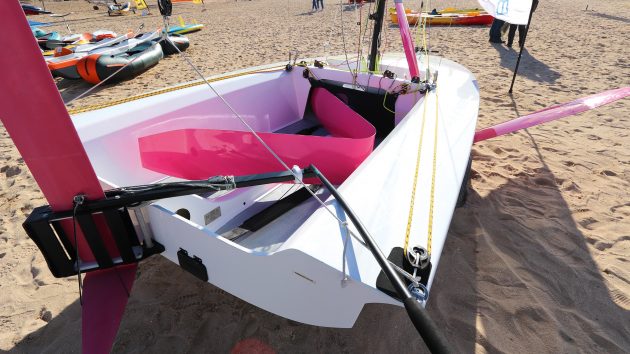 When transporting or storing, the self-regulating J-foils fit inside the cockpit. Photo: MULTImedia – François Tregouet

Course deviations must also be very limited. I estimate that the maximum allowed is more or less 2° around the true wind direction without trimming the sails. The penalty for overdoing it is immediate: the BirdyFish touches down, either softly or more brutally.

Tacking and gybing are not difficult, but it takes a little more experience to complete them in ‘flight’ mode. To demonstrate, Jean-Baptiste retook control of the boat for a series of foiling gybes. Crouching at the front of the cockpit, my role was limited to managing the Solent sheet and above all to hold on, as the rate of turn is brutal, a reminder of the extraordinary performance achieved. 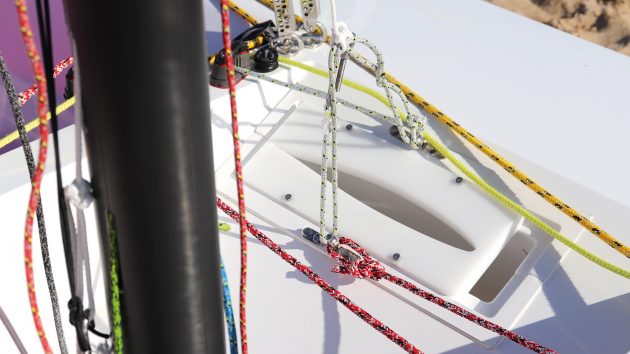 Only twice have I reached 18 knots at the helm of a sailing boat on my first try, and those were on a Gunboat 68 and an 80ft Ultim trimaran – very different budgets to the €18,840 standard BirdyFish.

Three essential options do raise the bill to €21,200 – it’s difficult to do without the jib furler for manoeuvres, a Code 0 with furler offers light airs performance, and a launching trailer is essential for the 135kg (297lb) whole package – but if you want to go foiling for a reasonable budget and with little experience, the BirdyFish rocket hits the target.