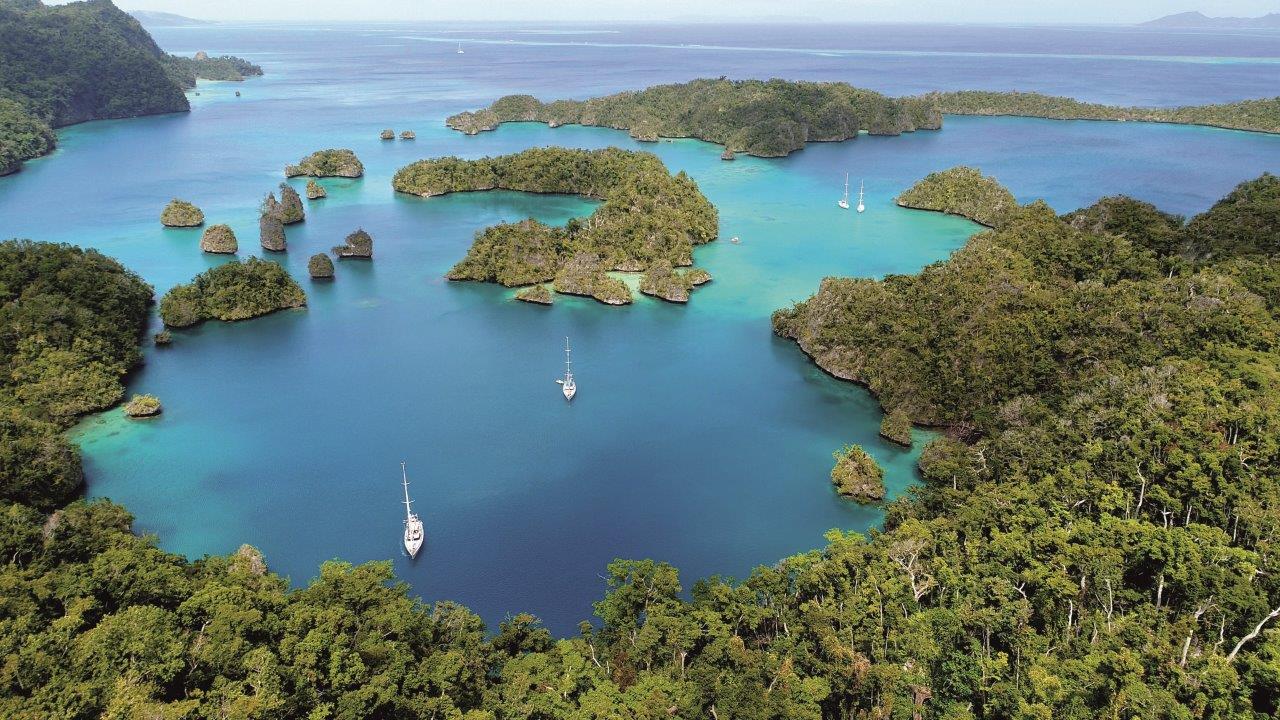 With over 300 islands scattered across Fiji’s waters, tranquillity is normality. Photo: Stu Johnson

The cruising season runs from May to October in Fiji, and this appealing archipelago is fast gaining a reputation as a Mecca for yachting, attracting royalty, celebrities, billionaires and anyone else with a spirit of adventure and a love of the sea.

Fiji offers some of the most stunning seascapes in the Asia-Pacific region. According to experienced superyacht skipper Carol Dunlop of Yacht Partners Fiji, who has been sailing in these parts for decades and has written a comprehensive cruising guide for the area (A Mariners Guide to Fiji), there are many reasons to cruise these idyllic waters.

“It is one of the warmest, friendliest nations on earth and caters to cruisers looking for adventure, experiences with locals, and very remote cruising,” she says.

While most yachting destinations worldwide were shuttered off from the rest of the world due to Covid-19 restrictions, Fiji remained a beacon for cruising yachts by pioneering its novel Blue Lane initiative. 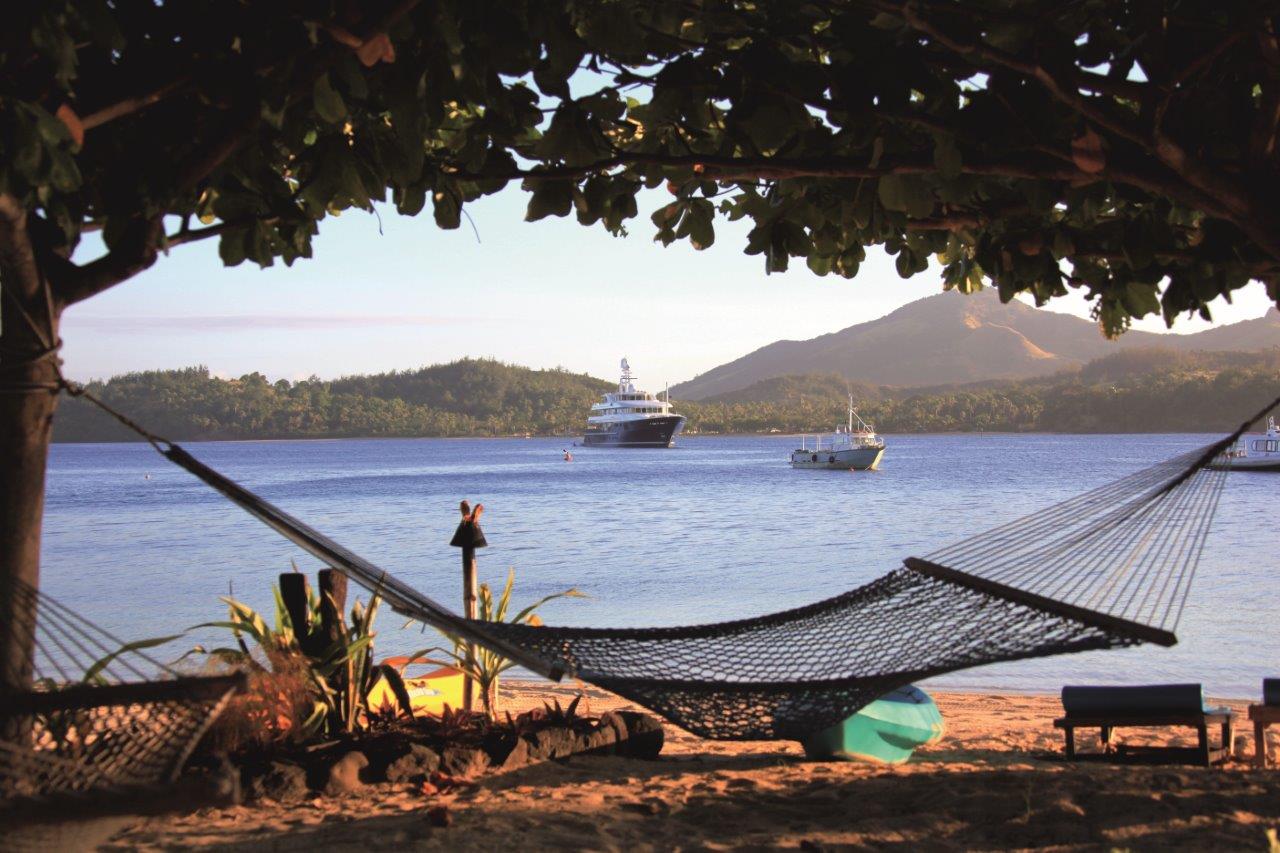 The architect of the Blue Lane scheme was Cynthia Rasch, CEO of Fiji’s only dedicated superyacht marina at Port Denarau, which provides 56 berths accommodating yachts up to 85 metres in length. It’s located on the western coast of the principal island of Fiji, making it easily accessible from Danu international airport.

“I dreamed up the Blue Lanes scheme out of necessity because tourism had come to a standstill in Fiji, including yachting,” Rasch told APB.

In normal times, Fiji attracts some 800 yachts per year, of which more than 60 are superyachts. Nautical tourism and yachting make a significant contribution to the Fijian economy, so when Covid-19 hit and yachting died almost overnight, it was a big blow for the island nation. An official report in 2019 estimated that the 4,473 yachties that arrived in 2018 spent a total of F$34.9m (US$16.8 million) on dockage, maintenance, fuel, food provisioning, restaurants and a range of other tourism activities. Rasch took those figures to the government and tried to persuade them that being in a boat was the oldest and most reliable form of quarantine.

“At the time, there were boats in limbo in Tahiti and Australia unable to berth anywhere, and it would take them seven to 14 days passage to get to us in most cases,” Rasch says. 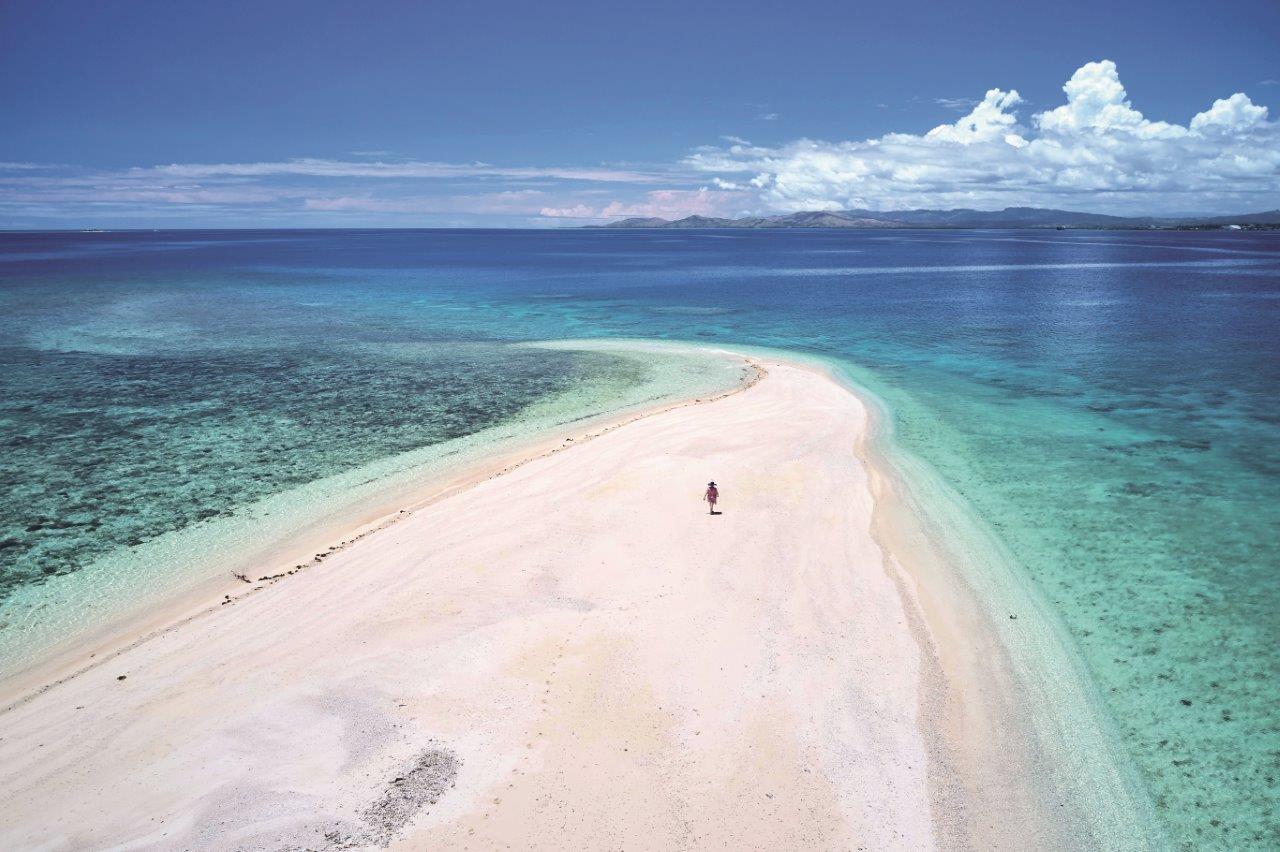 A woman strolls a remote sand bar with coral reefs on either side. Photo: Orion Media Group/Shutterstock

After lots of persuasion, hard work and planning, on July 19, 2020, her plan was approved and announced by the Fiji government – local officials christened it the Blue Lane scheme. Fiji yachting was back in business, and by July 15, the first yachts had already started to arrive. More recently, on March 24, 2022, the government of Fiji announced it was relaxing travel restrictions except for a basic 24-hour testing requirement for cruisers carrying fully vaccinated aboard, confident that if circumstances changed unexpectedly, the successful Blue Lane could be reimposed if necessary.

“Our Blue Lanes initiative, which was a smashing success through Covid, is now giving way to normalised maritime travel,” said Fiji’s Minister for Economy, Aiyaz Sayed-Khaiyum, and no one was more delighted by the news than Rasch.

“Fiji is now a great place to go cruising in times of uncertainty,” she says. 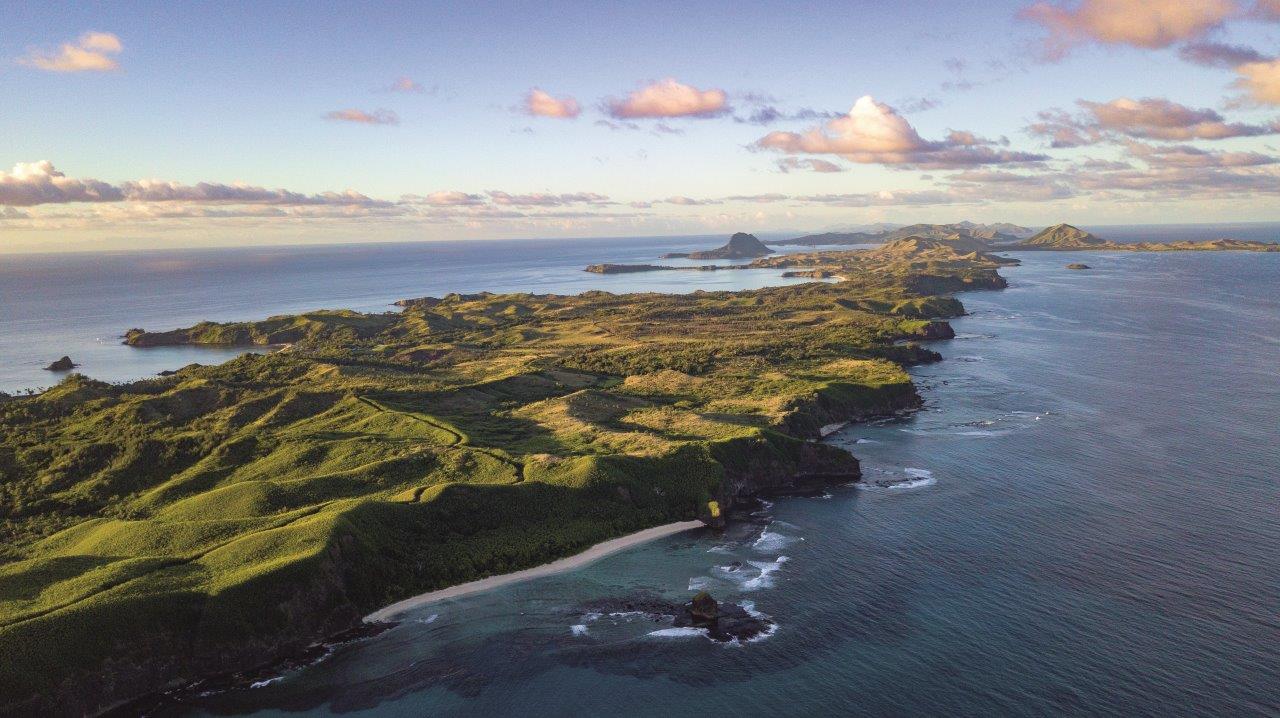 The long and narrow Yasawa Island, home to some pristine bays

Fiji offers beauty, space and privacy, which has made it a traditional haunt of celebrities and the well-heeled, and the 2022 season, which commences in May, is already looking like it might be a special one.

Rasch explains that the owner or the charterer usually arrives by private jet at the international airport and is transferred straight to the yacht, impatient to get cruising.

“Within three to four hours of touching down, they will be anchored in their own private lagoon enjoying the secluded beauty and privacy of this pristine environment,” says Rasch, who says that typically, owners or charterers will be in Fiji for five to seven days but occasionally stay for longer. 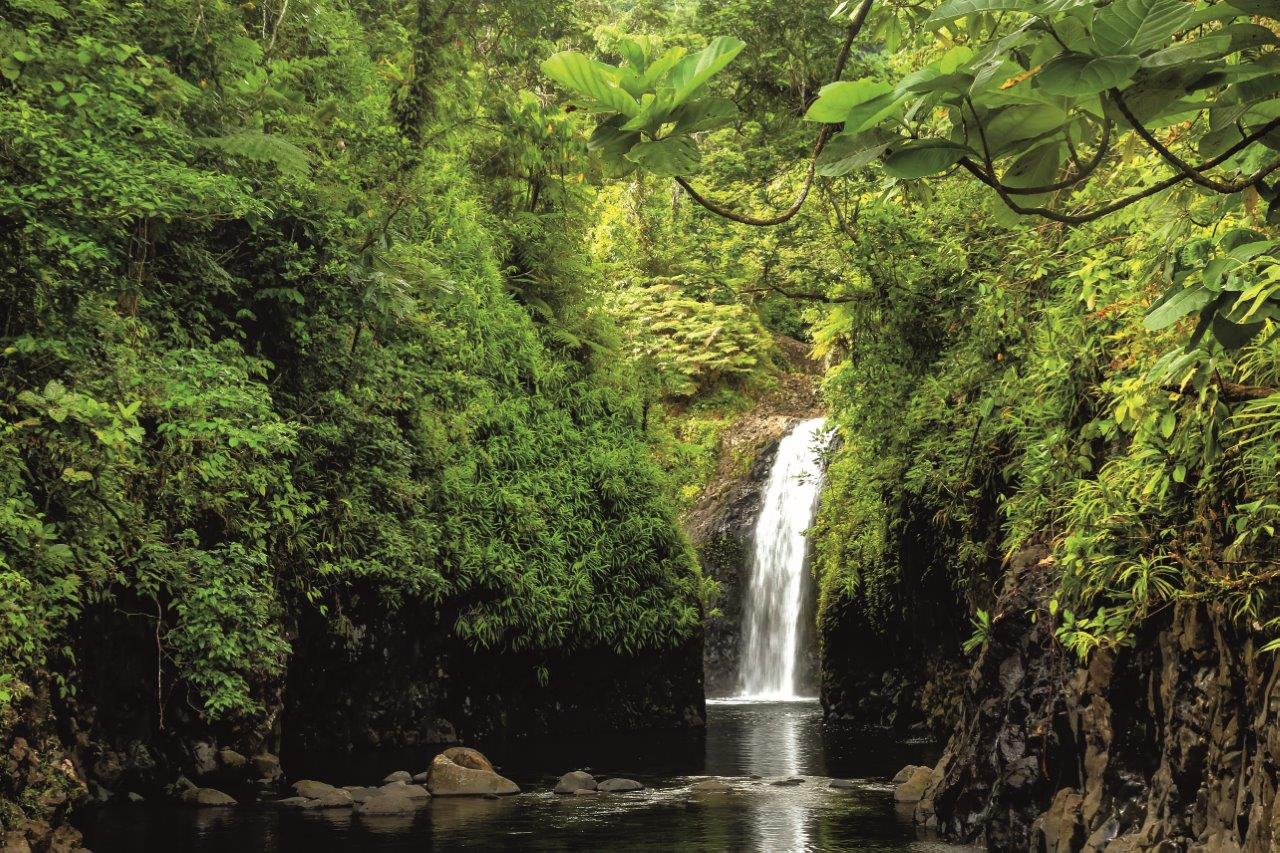 As Dunlop points out, the only challenge is that, given limited time, how to decide what to include in the itinerary?

Fiji is a nation comprising 322 islands covering a vast sea area of 18,376 sq km in the Pacific Ocean. The islands range from being large, volcanic outcrops with high peaks and lush terrain, to tiny sand keys and coral reefs, so small they peak out of the warm water only when the tide recedes. “In the outer islands, off the beaten tourist track, there are many deserted beaches, good anchorages, and opportunities to really experience local customs and the culture of Fiji,” says Dunlop.

This remote and tranquil location has always been popular with those seeking seclusion and privacy. According to local media reports, former CEO of Google, Larry Page is known to holiday in Fiji with his family and friends. During the Covid pandemic in 2021, Page arrived on a Fijian island with his family and asked the government to ensure no media converge to be telecast of his medical donations to the country or his arrival. The mogul owns a stunning 60m superyacht called Senses, purchased in 2011, which is also a frequent visitor to Fiji. 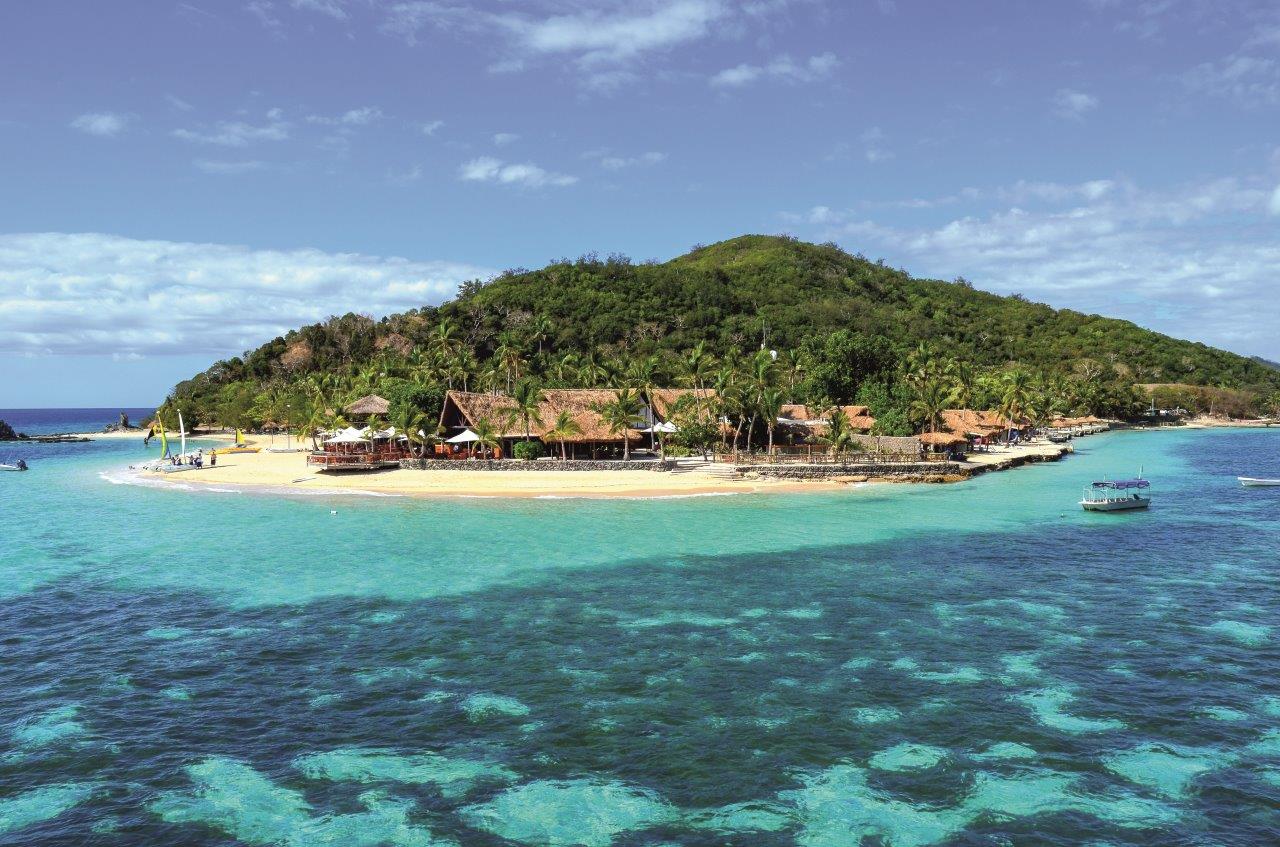 Rasch says that when Page first arrived with his family, they were always surrounded by a posse of security staff, but these days they are often seen just wandering barefoot down the marina dock. “Here you are away from the paparazzi, and no one at the marina will bother you — it’s all very relaxed,” she adds.

That could be why Prince Albert of Monaco, himself a keen yachtsman, decided to spend part of his honeymoon with his bride Princess Charlene cruising in Fiji in October 2011. The royal couple arrived at Nadi International Airport on the prince’s private jet and immediately went aboard the US$60 million 49.5-metre Perini Navi superyacht, Exuma. The vessel is equipped with two large doors in the bow, which open to give water-level access to the equipment deck containing hovercraft, an amphibious car, fishing tenders and diving gear, among other marine amusements.

Fiji isn’t only for celebrities and superyachts. Captain Aleksander ‘Sasha’ Kavs had sailed extensively around the Adriatic, Caribbean and Pacific, before taking over Quixotic Charters in Fiji in 2019, which he runs with his partner, Jennie. They offer expert-guided charters around the archipelago on their South African-built Voyage Norseman 430 open-ocean sailing catamaran. 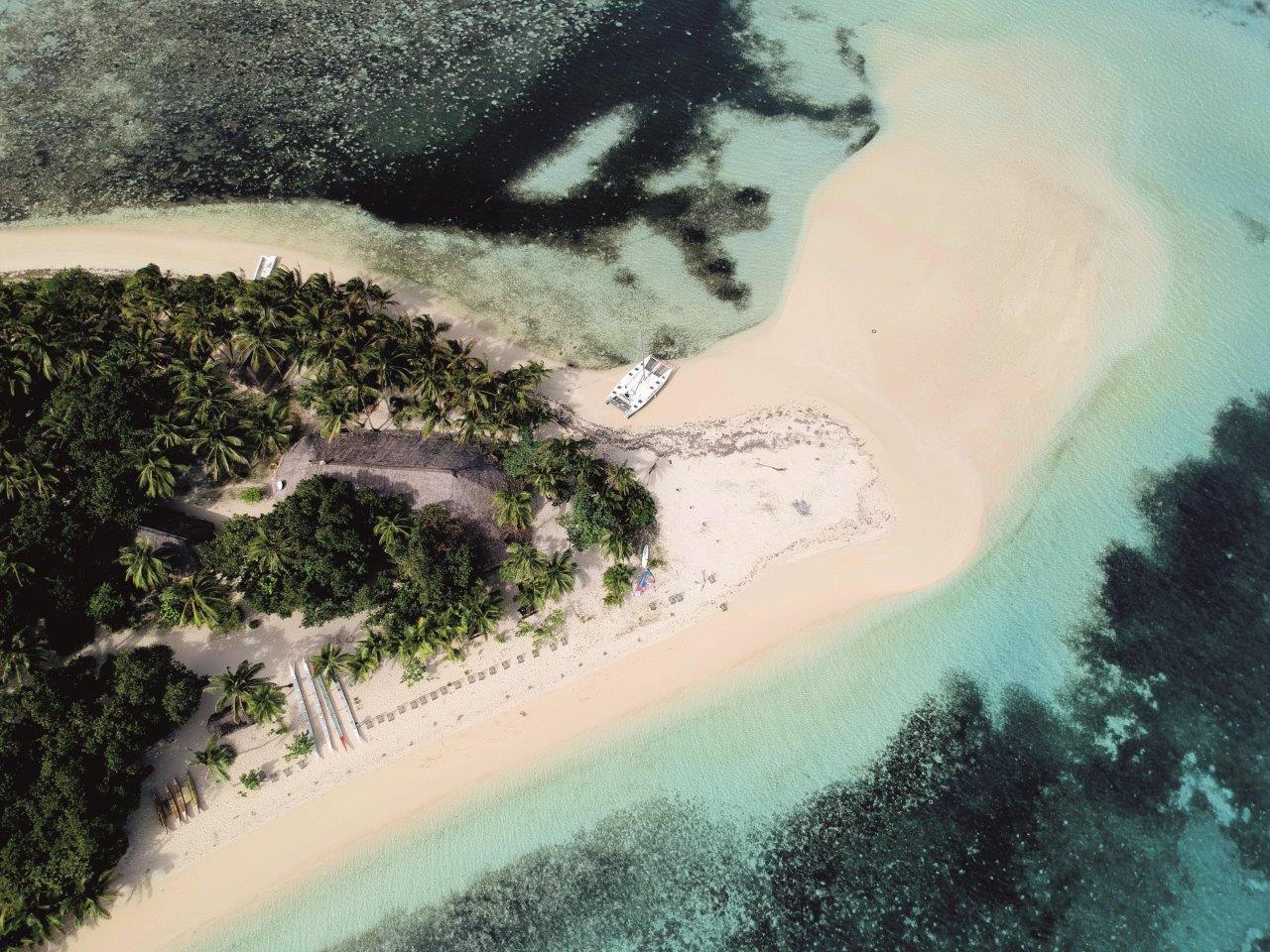 “In a matter of a day of sailing, you enter a different world and get either immersed in local culture or stay by yourself gently rocking in a protected bay with a sundowner in your hand,” says Kavs. After years of exploring some of the most exquisite harbours and bays on the planet, he decided to set his anchor in Fiji.

“All this time, I was looking for a place to settle down – and I found it here, in Fiji. I might be biased talking about Fiji, but I sincerely think this is the best place to be in this world,” he says.

Our experts in Fiji say five distinct cruising areas offer contrasting experiences to suit every traveller. While it might take a month or more to see them all, these are some special hotspots that can be selected for a shorter itinerary.

Nadi and Denarau
Nadi is Fiji’s gateway to its extensive cruising options across the beautiful archipelago, and it is home to the country’s main international airport. Established in 1947, the city bloomed into a flourishing tourism hub in the 1960s. A 30-minute drive from Nadi Airport, the small private island of Denarau is connected by a short causeway and replete with high-end hotels and resorts. It also hosts Port Denarau Marina, the country’s only specialised superyacht marina, where provisioning is made easy with a supermarket, pharmacy, and bakery readily available. Most charter boats are based in or start in the vicinity of Nadi International Airport – from where flights to more remote domestic locations allow you to meet your vessel further afield.

Mamanuca and Yasawa Islands
Captain Aleksander ‘Sasha’ Kavs of Quixotic Charters suggests boarding your charter yacht in Denarau and setting sail on a seven to 10-day cruise in Mamanucas and Yasawas, on the western side of the archipelago. Lined with white-sand beaches throughout, the Mamanuca and Yasawa Islands are one of the more accessible groups. They stretch across an expanse about 80 nautical miles north of the principal Fijian island of Viti Levu. The island chain is peppered with resorts, such as Turtle Island Resort on Nanuya Levu: the site where the 1980 romantic drama Blue Lagoon was filmed.

The passage to the northernmost island of Yasawa-i-Rara requires a long sail, but Kavs says that once there, you are rewarded with incredibly crystal-clear water, unspoiled coral reefs, and miles and miles of white-sand beaches, often all to yourself. Visitors will enjoy wonderful sunsets anchored in protected bays, since the wind comes from the southeast during the cruising season (May to October). There are many interesting locations on the leisurely return to Denarau, including the caves in Sawa-i-Lau, swimming with gentle giant manta rays in Drawaqa Pass or diving with sharks at Kuata Island.

Taveuni Island
Matei Airport on Taveuni is the preferred base to visit the Ringold Islands at the northern periphery of the Fijian archipelago. Taveuni is located some 100 nautical miles northeast of the main island of Vana Levu, and because of its vast jungle and biodiversity, it has been dubbed ‘the garden isle’.

Carol Dunlop of Yacht Partners Fiji says one-third of the island is covered by a heritage park that bursts at the seams with lush jungle, cascading waterfalls and over a hundred species of bird, such as the Red Shining Parrot – noteworthy for its bright, multi-hued plumage. Dunlop advises visitors to spend some time exploring the two islands nearby that are populated by displaced South Sea Islanders: Rabi and Kioa; Ravs says that if you were to describe the most idyllic tropical bay in Fiji, it might well be Albert Cove on Rabi Island.

Beqa and Kadavu
For those that want to enjoy the wonders of the Fijian archipelago without long voyages, Beqa is only seven nautical miles south of Vana Levu. Beqa is home to the ‘firewalkers’, members of the Sawau tribe, who can walk barefoot over blazing hot rocks.

Ask any Beqa island native to regale you with the legend behind this, and they will be happy to share their proud and unusual history with you. Some 40 nautical miles further south is Kadavu. The Kadavu Group comprised the volcanic islands of Kadavu, Ono, Galoa and a number of smaller islands in the Great Astrolabe Reef. Dunlop describes this area as “a fabulous cruise for those who are interested in varied diving.”

Lau Islands
Forbes magazine has listed the Lau Group of islands, located some 150 nautical miles east of Vana Levu, in its lists of the World’s Most Beautiful Places, selected for their “mind-blowing array of marine life and a gentle, carefree vibe.” These islands are the least visited and most remote islands in Fiji. The culture and traditions have been preserved, along with a fascinating history where the chiefs of Lau ruled most of Fiji.

The Lau Islands have a unique and spectacular geology made up of limestone that has been eroded by the elements into dramatic islets and arches located inside sheltered lagoons. “The Lau Group provides a voyage of adventure and discovery for the yachtsman,” says Dunlop, adding that the people of Lau are welcoming and friendly.