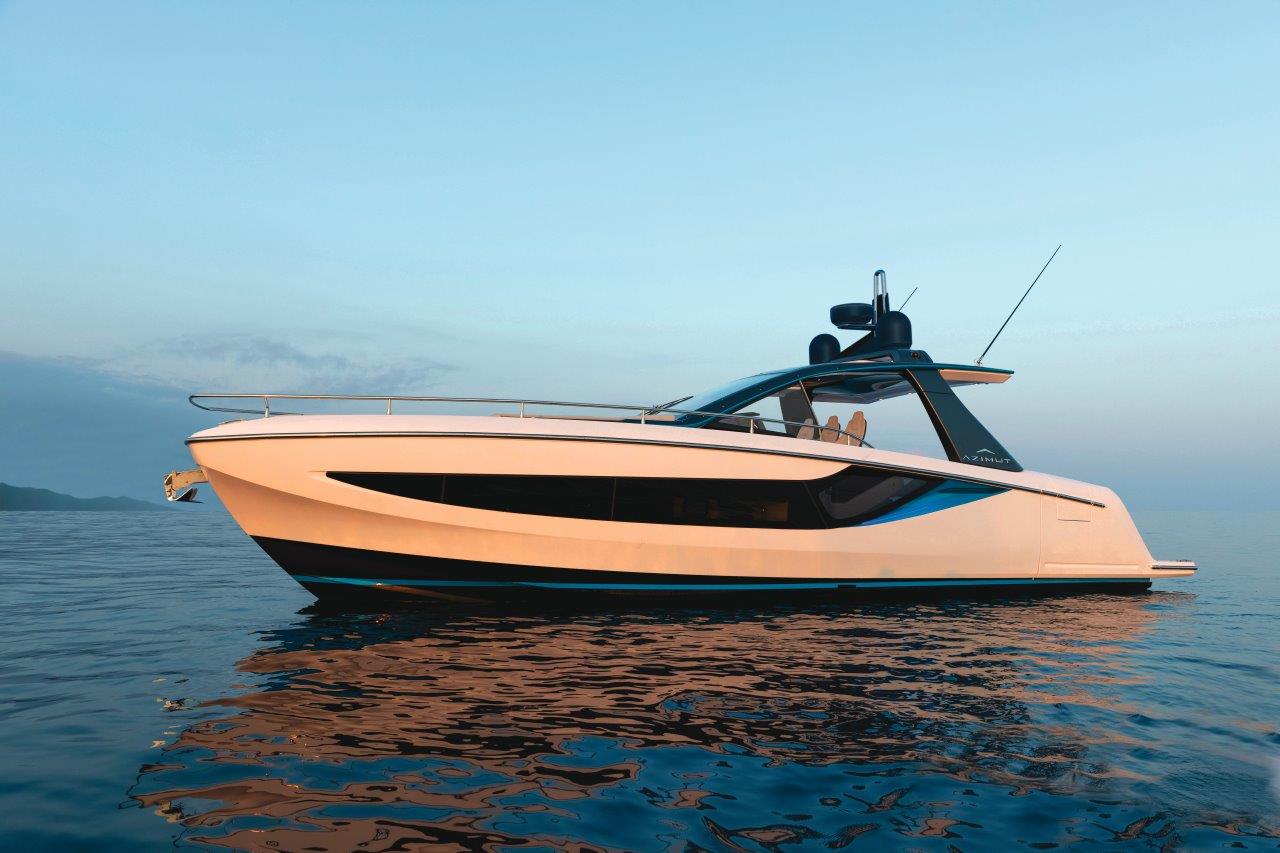 The Azimut Verve 42 is the latest in Tuscany-based builder Azimut’s line of dayboat/weekend exploration yachts and something of a showbiz star. It blurs the lines between gorgeous Italian looks (the show) and serious performance underway (the business).

Azimut launched this series with the Verve 40 in 2016. The aim was to enter the US market for centre-console dayboats, so named for their centrally-aligned helm station and walkaround passages. The position of the helm is great for visibility, and it is much appreciated by sport fishermen in particular.

Azimut recruited Michael Peters Yacht Design in Florida to develop the hull. Michael Peters made a name for himself in the 1980s and ’90s designing and patenting hull shapes for offshore powerboat racing. He helped to popularise the stepped-hull design, which has become standard for yachts aiming at fast performance.

Across the entire Verve series, Peters has designed the hulls in a bid for speed and performance. The Verve 42 features a double-stepped hull with a deep V and a central stern tunnel, based on the famous Stepped V Ventilated Tunnel (SVVT) developed and patented by Peters. 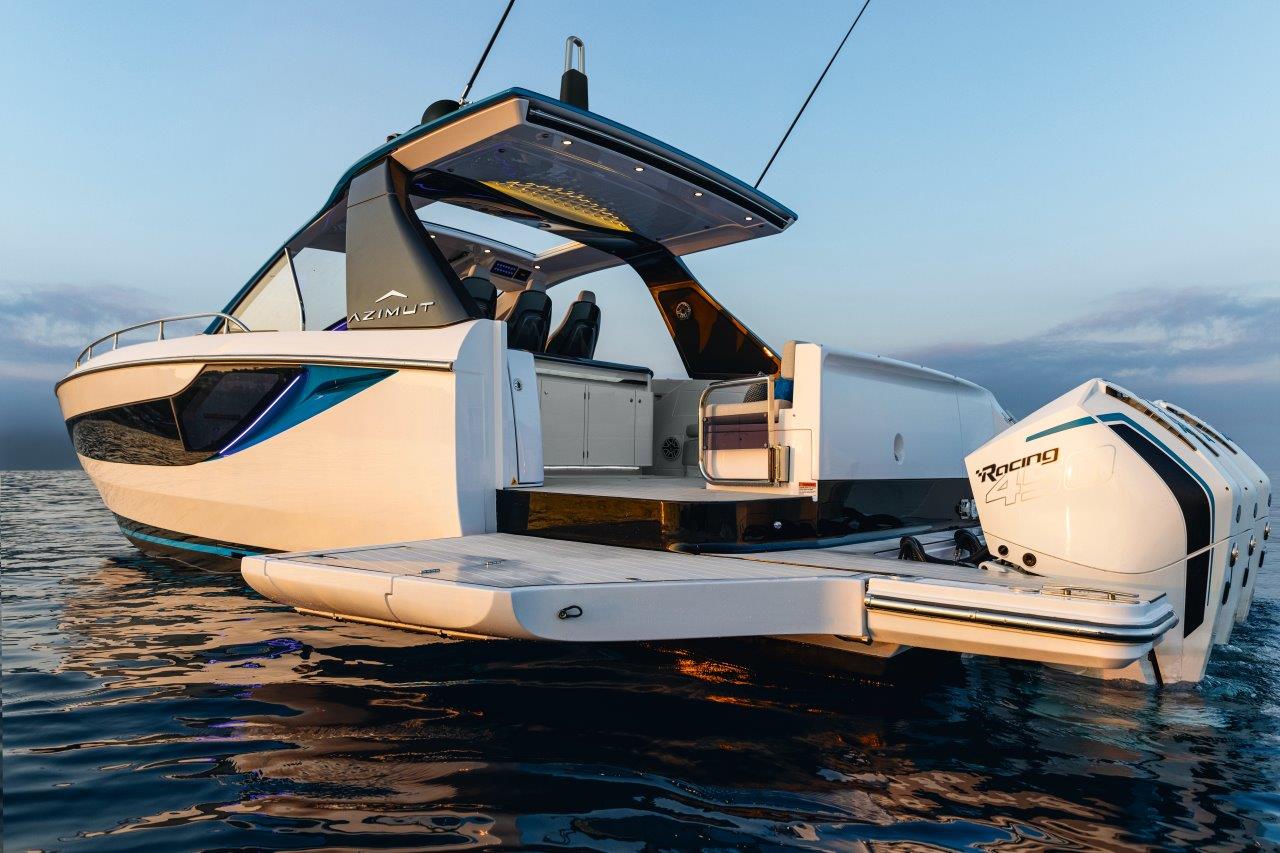 The Verve’s spacious cockpit and side beach area

The deep V reduces slamming while at speed, and the two steps allow for greater efficiency. A central stern tunnel improves the boat’s high-speed handling. These features guarantee a smooth ride at speed, even in the likes of Hong Kong’s choppy waters around Sai Kung during the late autumn.

The Verve 42 has a top speed of 45 knots, which is a hair-raising ride given the open layout. Guests can get comfortable in the bow area and enjoy a great thrill at the cruising speed of 33 knots. Once again, this latest Verve model uses a triple outboard engine layout to easily achieve this kind of pace. The 42 comes with three Mercury V8 450s, which deliver handling and punch to match the sporty hull.

The Verve 42 features a double-stepped hull with a deep V and a central stern tunnel, based on the famous Stepped V Ventilated Tunnel (SVVT) developed and patented by Michael Peters

Reducing weight is a key element in gaining efficiency, so Azimut built much of the upper part of the Verve 42 in carbon fibre. At its very fast cruising speed, the Verve 42 has an approximate range of about 200 nautical miles on 1,750 litres of fuel. 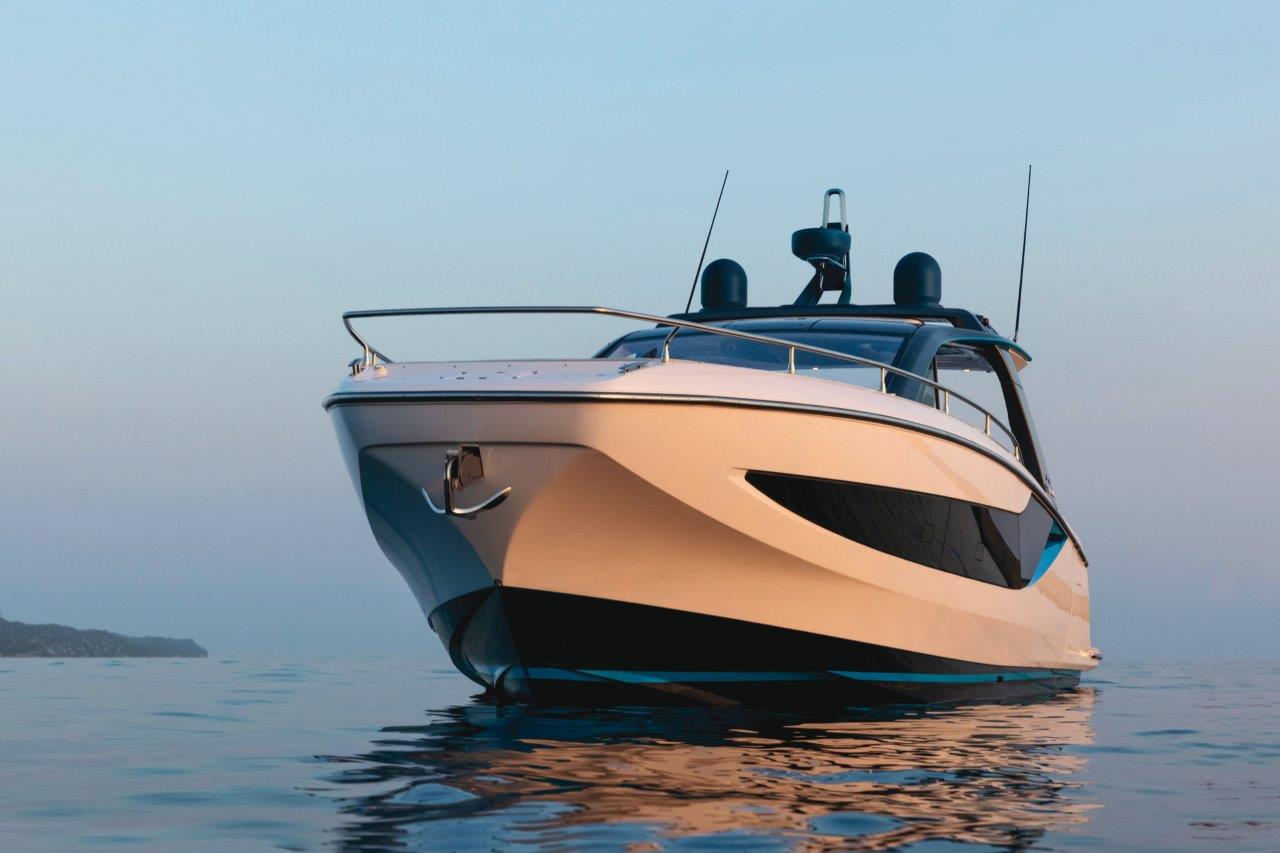 The hull’s deep V reduces slamming while at speed

While you might expect this kind of thrill on a more basic, pared-back yacht, Azimut has taken care to make sure the experience of being on board is truly comfortable. Storage spaces are everywhere, including a storage closet in the transom that can house a Seabob water sled and more.

Storage spaces are everywhere on the Verve 42, including a storage closet in the transom that can house a Seabob water-sled and more

There is the fold-out beach platform at one side of the stern, which is almost becoming standard on new outboard yachts these days. For the driver of the 42, Azimut has added hull side windows into the bulwark, so that the view goes down to the sea. 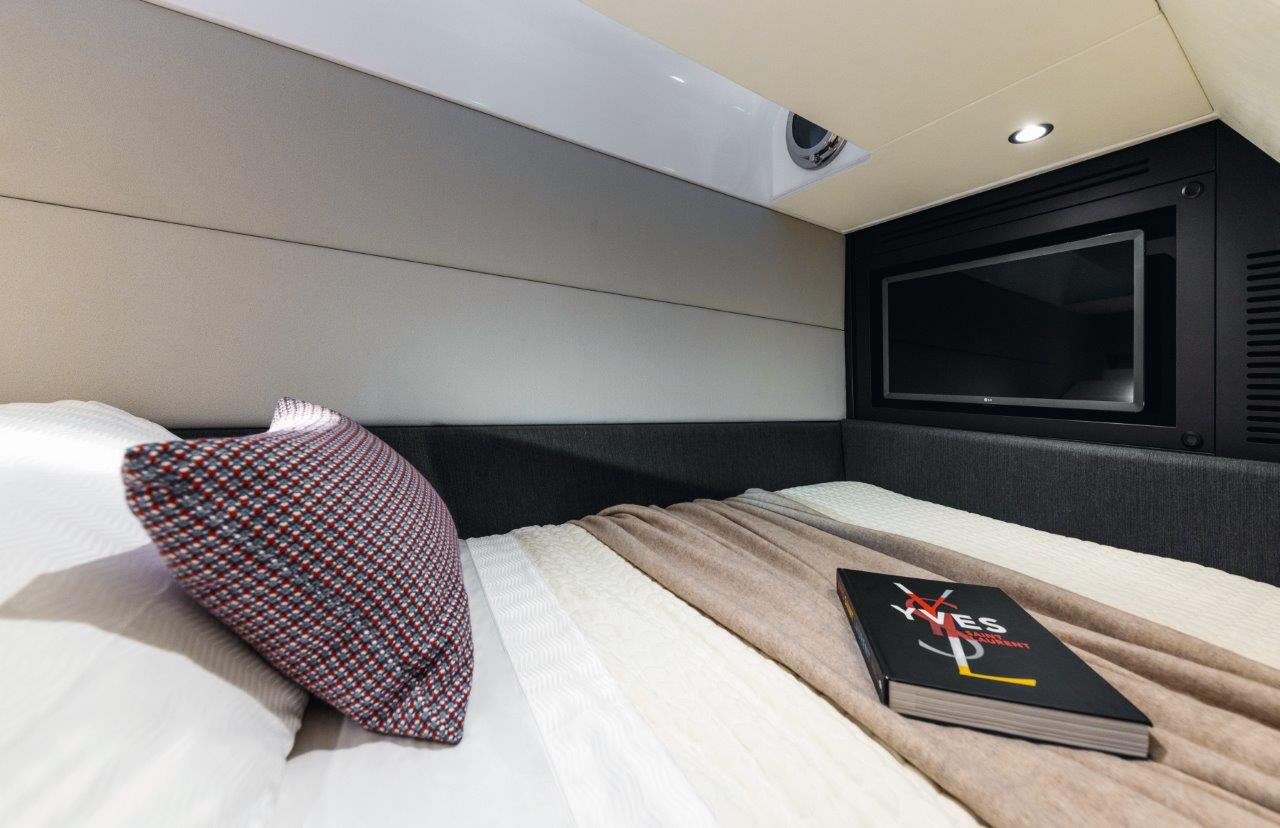 The owner’s cabin makes a comfortable sleepover at anchor possible

For owner and guests, the bow area will be a special place to relax, either at anchor or underway. Azimut fitted a table in the bow, which can easily be removed if required. The lightweight tabletop is made of carbon fibre and neatly tucks under the bow seat, while the pedestal can be detached, leaving a smooth deck surface. Under another bow seat, there is a cooler for drinks, while speakers deliver the music. In short, the bow isn’t just an excuse for sun pads.

Behind the console, the designers have created a complete entertainment and lounge space. There is lounge seating, a full wet bar and cook station with up to three grill or cook tops that can be added. There is a sizeable, pop-up TV, and an electrically-controlled awning that can be deployed. Perhaps most importantly, the main table in the aft cockpit is designed to drop down seamlessly into the deck, so that the lounge area can be used to stow everything from scuba gear to a boatload of inflatables. 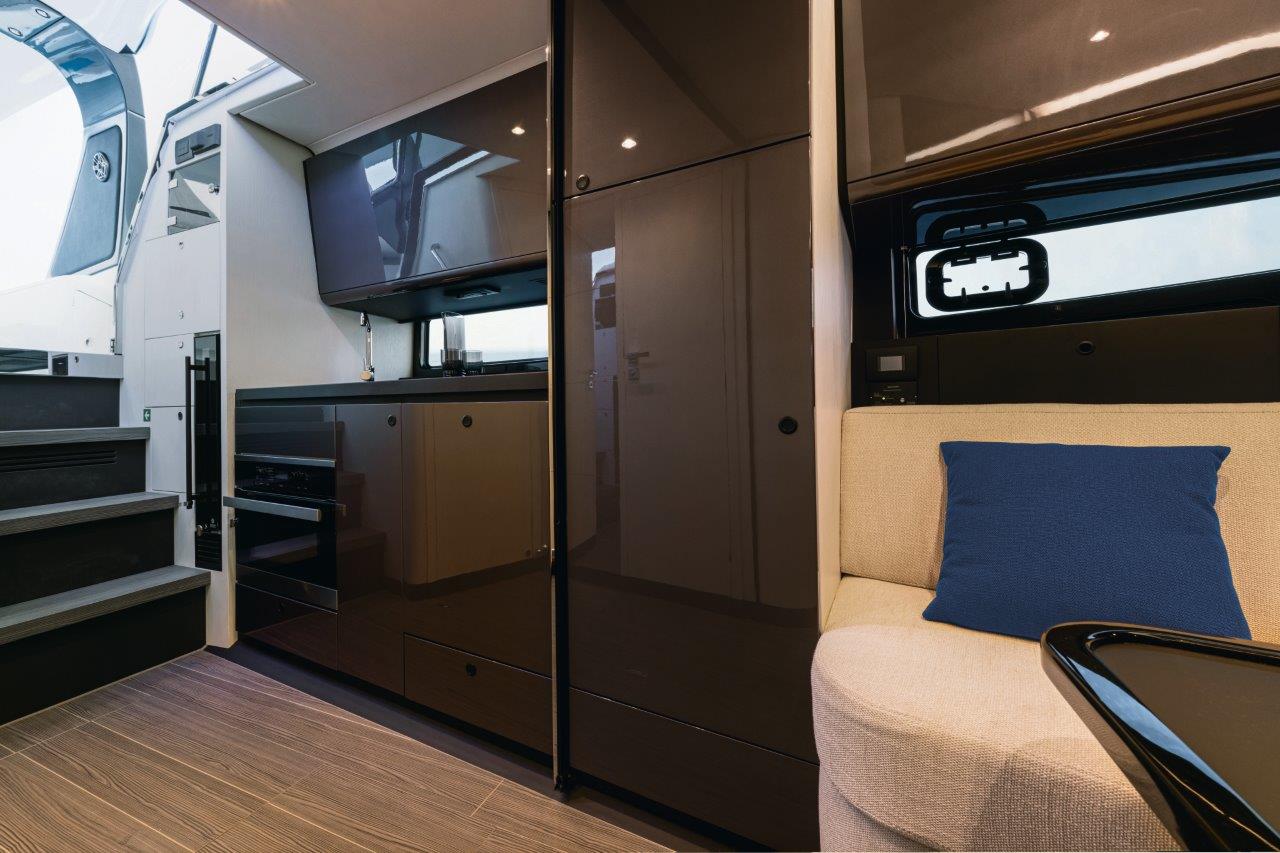 Down below, Azimut has worked hard to create a worthy overnighting space. There is a bow lounge and day head with shower, which itself is sizeable. There is also a queen-sized bed amidships, which makes a comfortable sleepover at anchor possible. There is also a galley below deck that can come with two burners. The bow lounge can also double as sleeping space for kids, making overnighters for the whole family possible.

The main table in the aft cockpit is designed to drop down seamlessly into the deck, so that the lounge area can be used to stow everything from Scuba gear to a boatload of inflatables

For the driver of the Verve 42, there’s much to enjoy. The racing-style seats, combined with the open console and bulwark side windows, make the boat a joy to push to its maximum. The Verve 42 also comes with a Skyhook digital anchor system to enable the pilot to keep his yacht in place, even with significant winds. There is joystick control as well as normal throttle control of the engines. 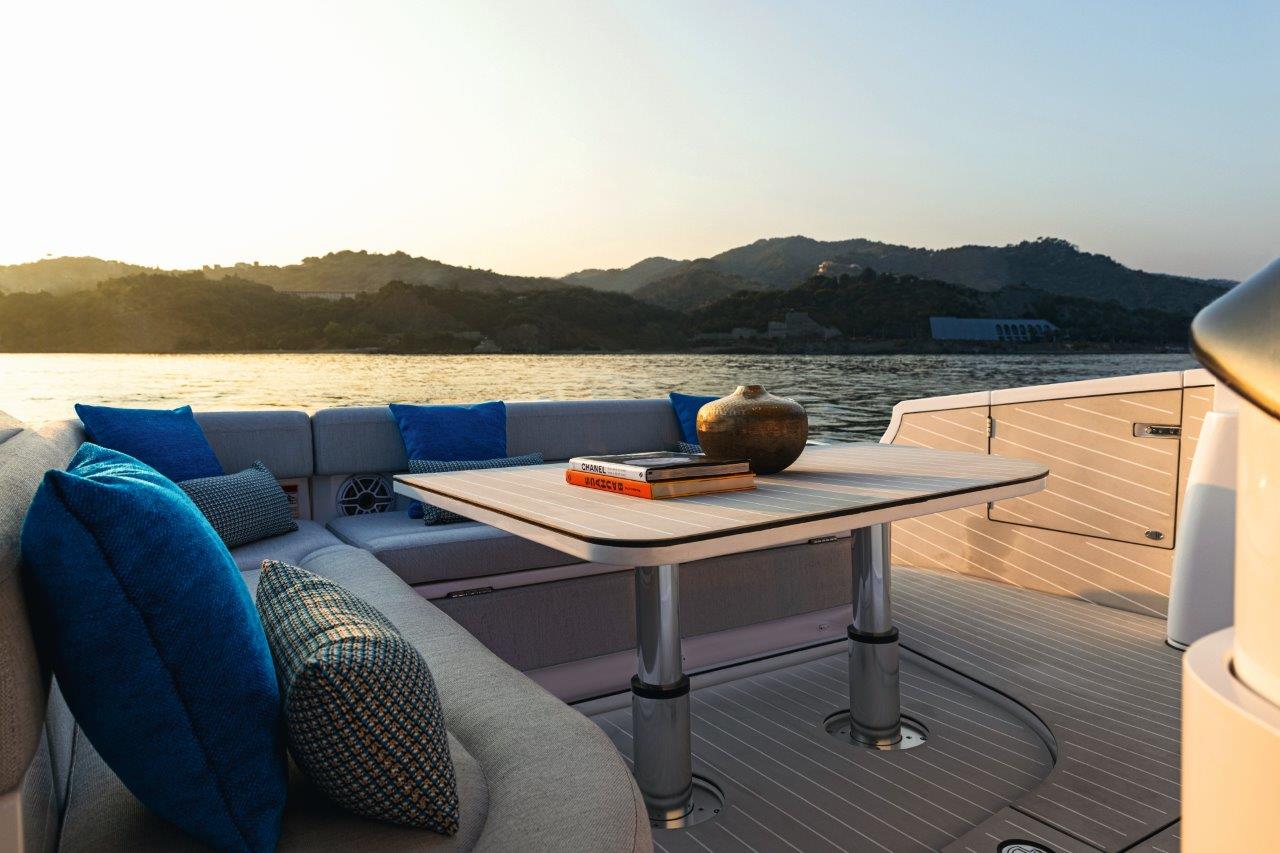 This is an owner-operated yacht and with that in mind, Azimut put the engineering access in a hatch under the aft lounge table. It is a tight fit to get in, but an owner (or maintenance engineer) can access all the main components for repair or replacement.

Azimut has done a great job packing in as many design and engineering features as possible into a compact package with the Verve 42. Owners will find their weekends transformed – with a bit of verve.