The Lagoon 51 sailing catamaran replaces its predecessor with one extra foot on overall length, but a whole lot of extra on-point appeal 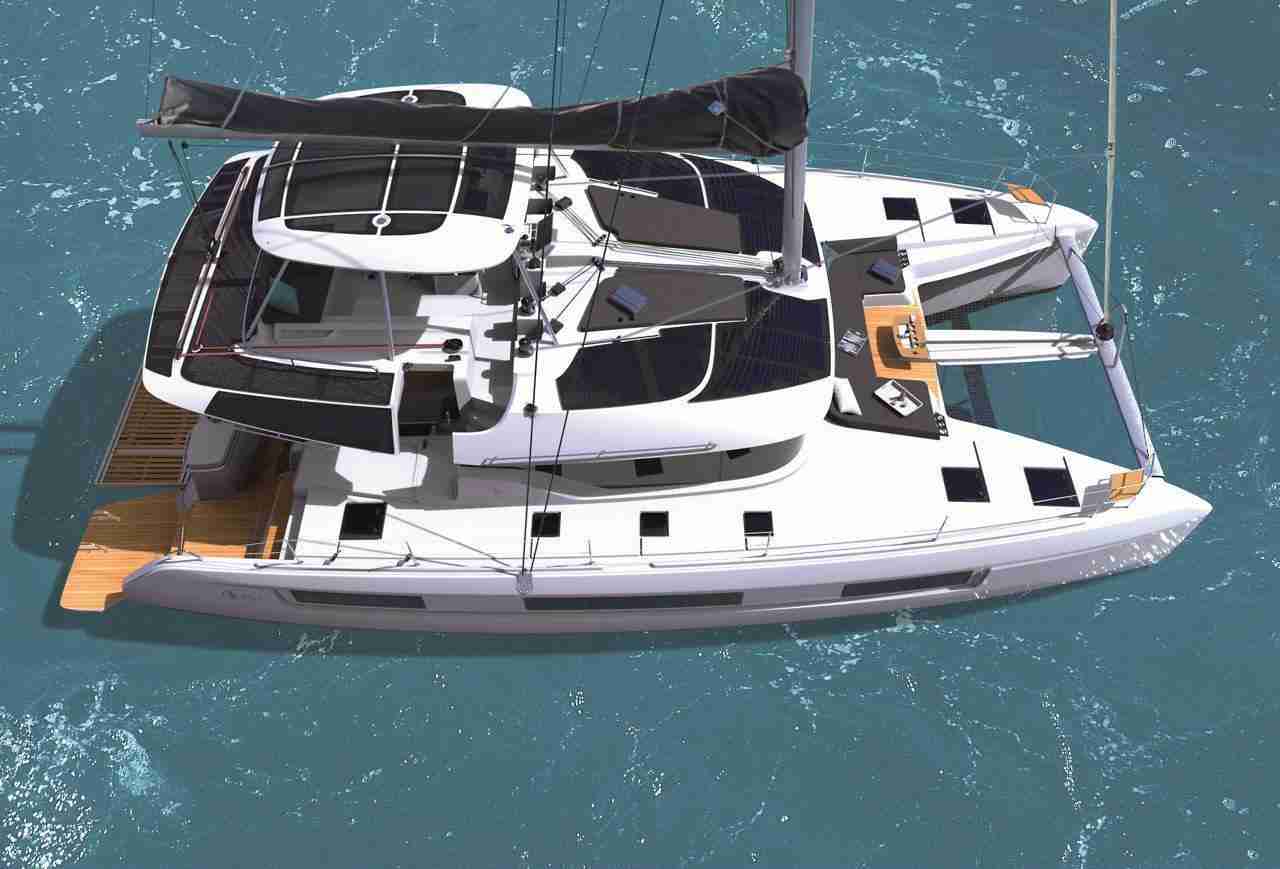 In late December last year, French catamaran builder Lagoon announced the imminent arrival of its new sailing model. The 51 will make its world premiere on April 20 at the 2022 International Multihull Show in La Grande-Motte, France, replacing the similarly proportioned Lagoon 50.

There is certainly more to the new 51 than the sleek lines and curves, inside and out, which first greet the eye. And this is not surprising, as last year’s Lagoon 55 sailboat had already set a more elegant tone than its twin-hull predecessors under Lagoon, a Beneteau Group brand.

“We designed the Lagoon 51 as a perfect synthesis of the modernity of its shapes and the sail plan, with living space on deck and inside that is unequalled on a boat of this size,” says VPLP Design (Van Peteghem Lauriot-Prévost) – the French naval architecture firm who are the principal designers for Lagoon’s sailing fleet.

Compared to the outgoing 50, hulls and nacelle are similar in design – except for lengthened wide sugar scoops at the stern, and hence more space around steps that lead to water access on each hull. A tripartite swim platform at the stern forms a good usable mini beach club terrace from which those aboard can swim or relax with feet dipped in the water. The configuration also allows effortless, safe access to the sea and when boarding the Lagoon 51 from the dockside. The central hydraulic platform in this feature – in collaboration with Tenderlift – offers a handy way to lower or raise a small tender or water toys when moored. 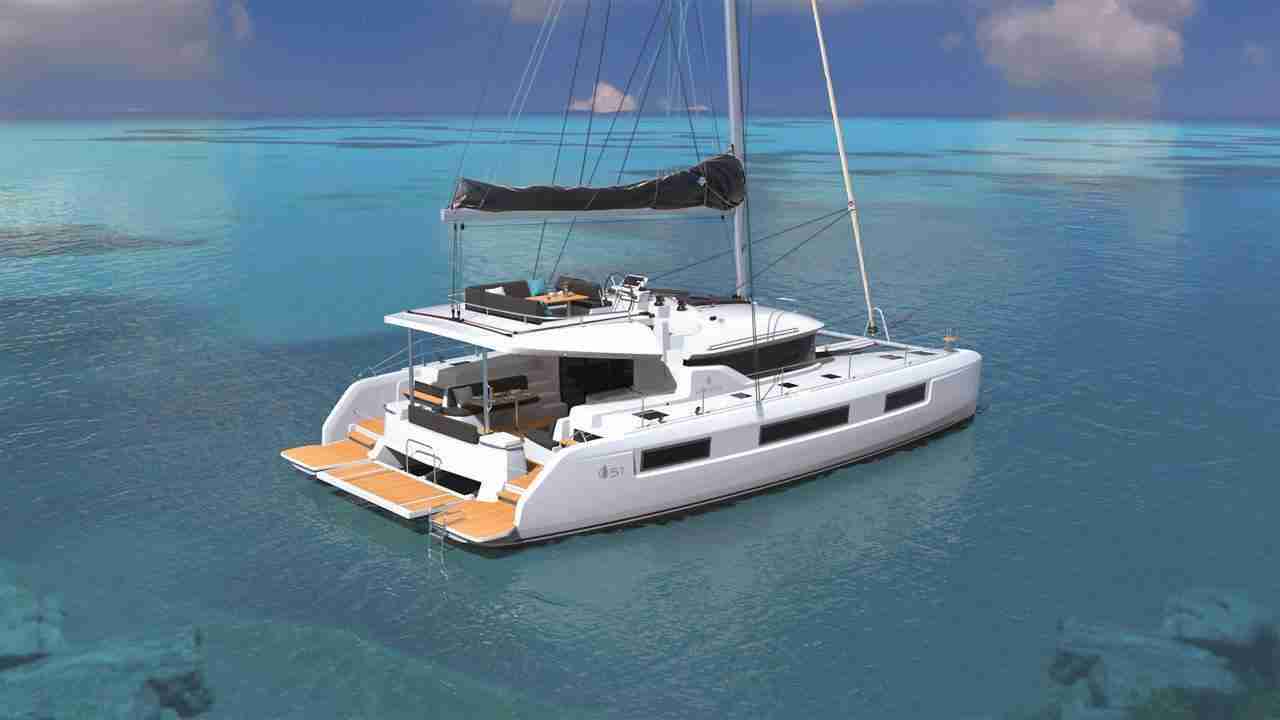 There are just two very small steps between the transoms and cockpit for comfortable movement on board. The depth between these two levels is particularly low, making a practical design feature.

The raised cockpit and the sunbathing areas in this new 51 have morphed into the catamaran’s flybridge, incorporating a forward sun-lounging space. The optimised flybridge occupies around 80 per cent of the roof area. Its two large sunpads in front of the helm station overlook a generously proportioned forward lounging area on the main deck below.

Two stairways lead to the fly deck of this yacht, one for the helmsman and one for passengers. This double access allows a great fluidity between the living spaces of the boat and means access will less likely be blocked, should the captain be in a hurry to get to the primary control area. The captain’s seat at flybridge main helm, like its companion seat, can be reversed in direction when appropriate, to face backwards, allowing conversation with passengers sitting on L-shaped sofa seating around a dining table just behind it – this all adds up to a well-thought-out convivial space. With full headroom – even when a removable hardtop shade is erected – guests can comfortably use this helm and seating area while underway.

The captain’s seat at the flybridge main helm, like its companion seat, can be reversed in direction 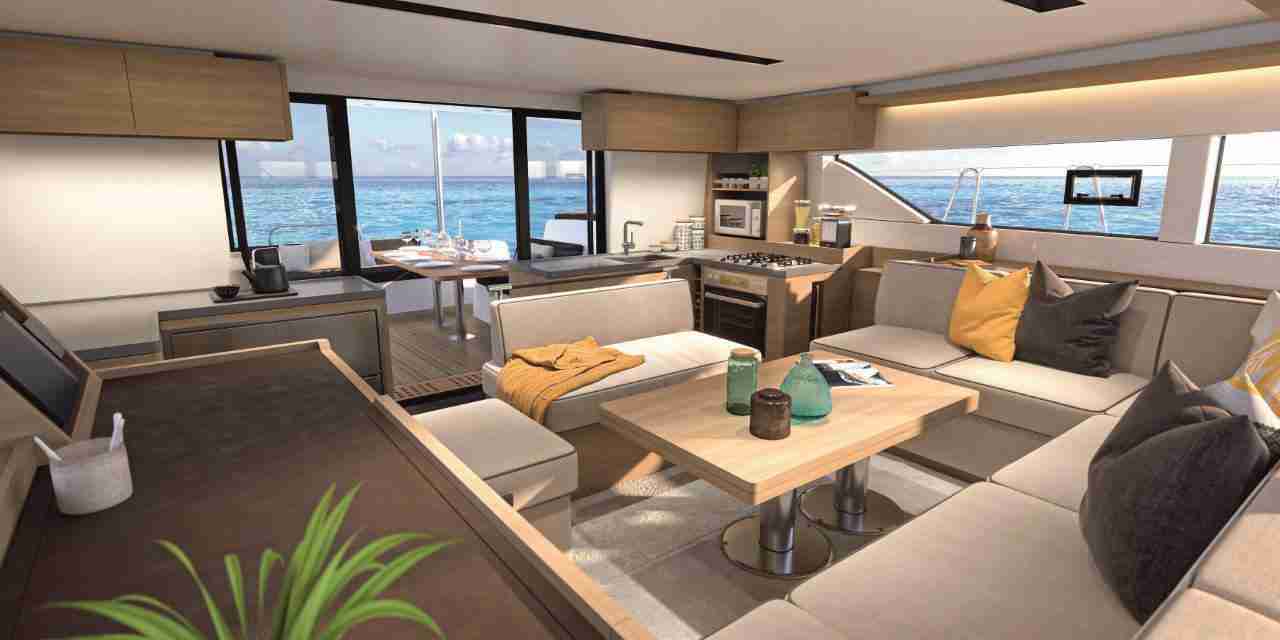 Walk along the side-decks on the main level to reach the forward cockpit, with a generous C-shape seating area around a central table that can be lowered to create an even larger sunbathing or socialising area. This open space has an unobstructed view over the ocean and is designed to be another choice spot for quiet relaxation or group sundowners. In sunny conditions, a shade sail offers respite. This forward cockpit makes being hospitable easy, with plenty of cupholders around, as well as a large coffee table.

Lower deck configurations on the new Lagoon 51 include a four-cabin and three heads version, including an owner’s ensuite. There is also an option for six cabins and four heads. Interiors in cabins and saloon have an earthy-toned palette of shades available, which lends an air of understated luxury.

Like an increasing number of shipyards, Lagoon teams have reshuffled their priorities to meet the shifting demands of seasoned owners and the new generation of first-time boaters. As a result, integrated, efficient solar panel options are presented in the 51, with technology that provides more than 3,400 watts of power that can operate all on-board appliances except for the air-conditioning). The solar panels fit perfectly into the curved lines of the flybridge and hardtop of the catamaran and are unobtrusive to seating and sunpads. 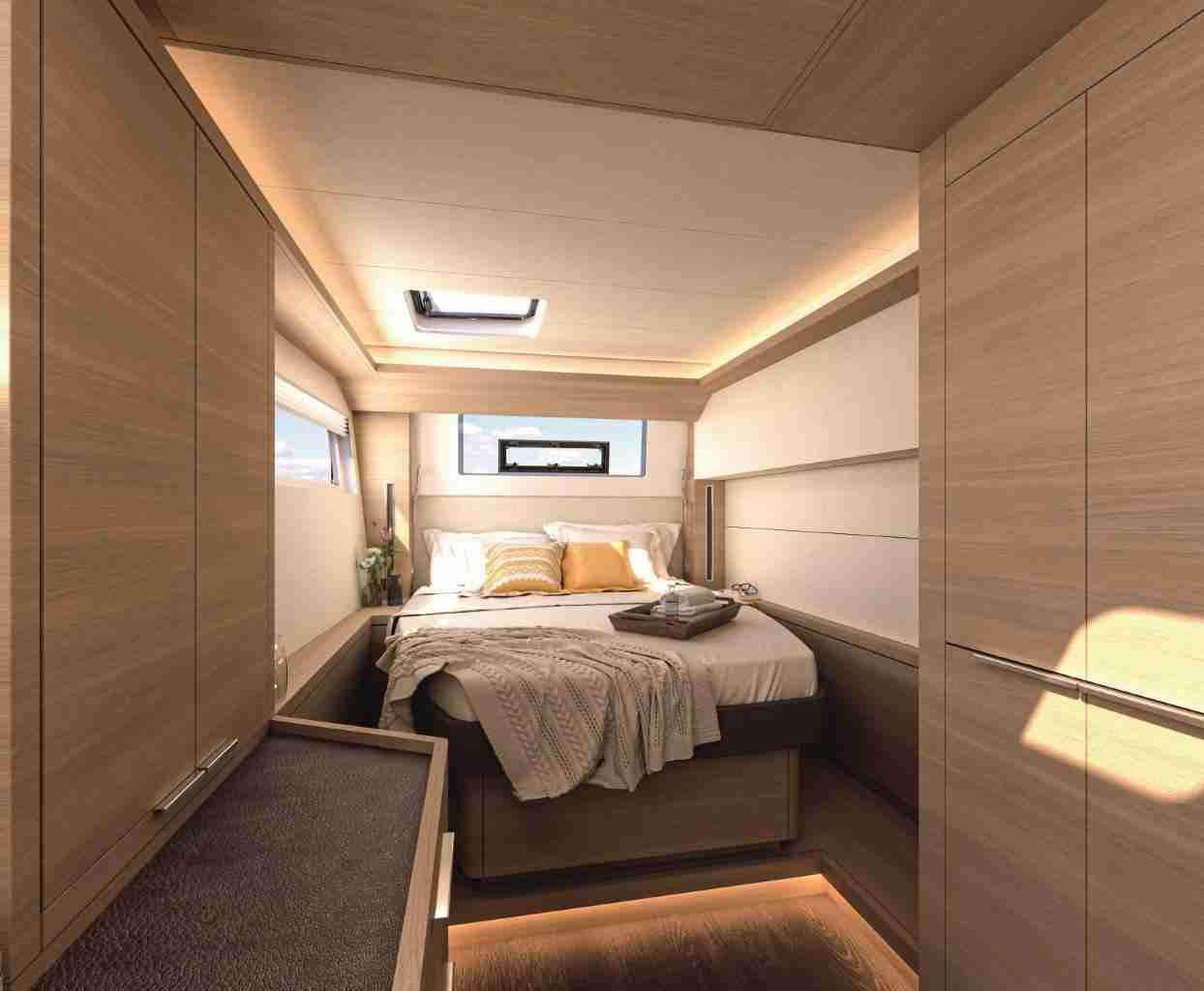 An earthy-toned palette of shades is available in the cabins

The model brings in other sustainable features, including having hemp fibre replace fibreglass wherever possible, together with partially bio-sourced resins. Upholstery in recycled fabric is a proposed standard option, as is Forest Stewardship Council-endorsed reconstituted wood from Alpi.

The 51 heralds a new era of connectivity aboard Lagoon models. Beneteau Group’s new initiative with the Seanapps app simplifies the boat’s management and maintenance. Seanapps allows fastchecks to be made on fuel and battery charge levels, and there are also inbuilt maintenance and operations histories. More detailed read-outs are found easily through the app on everything from the boat’s GPS position to engine information, depth and wind information, average speed, maximum speed, distance travelled – and much more.

Lagoon catamarans have always focused on ease of use, and the sail plan on the 51 is very similar to the old 50, as are sail operations. However, whereas the brand was previously known for minimalist design, it adds a dash of extra elegance in this model. We shall see if these new directives are set to continue in other future Lagoon sail models.