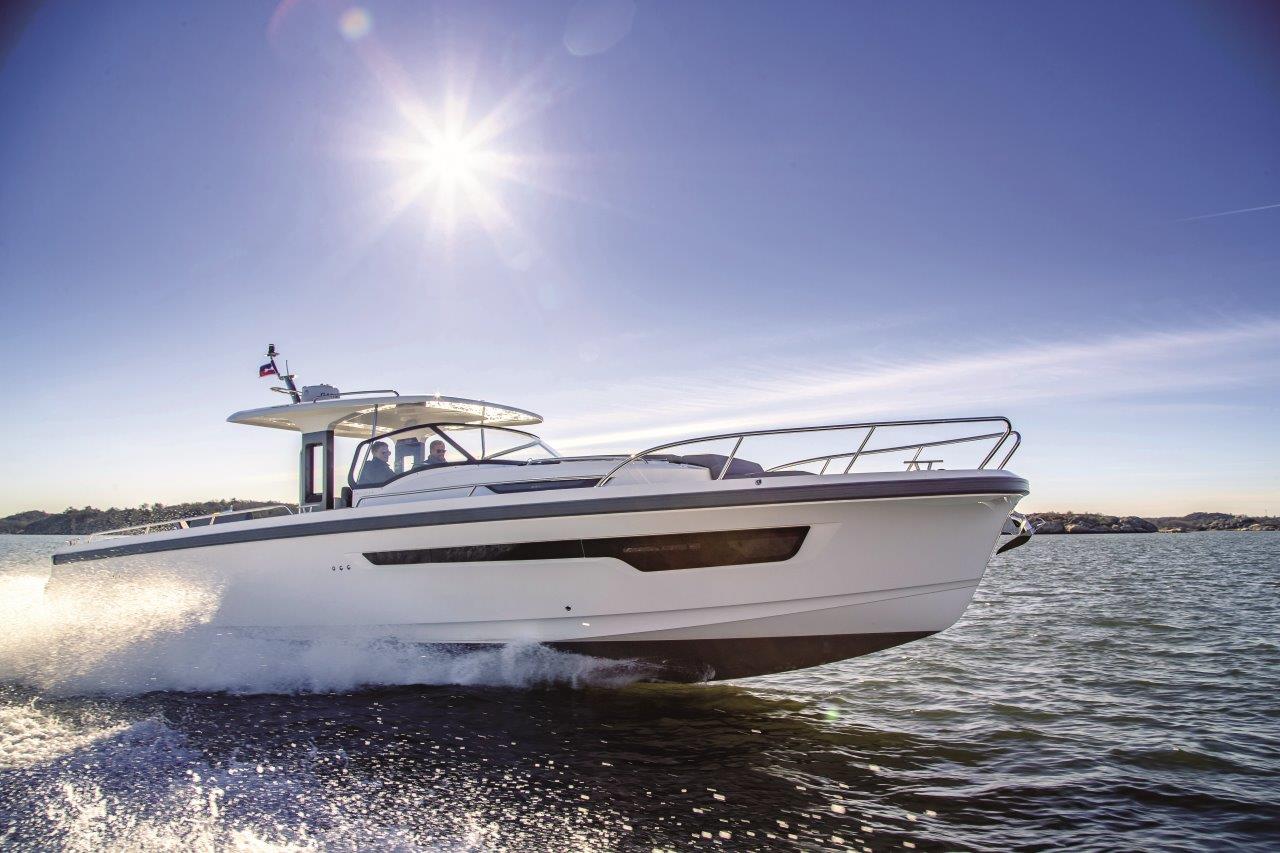 Like any well-made boat and like most other high-end products, the proof of the quality is in the real-life experience. And so it was, under a bright, mid-March afternoon in Hong Kong, that I took a sea trial aboard one of the first two Nimbus T11s to arrive in Asia (another T11 arrived in Thailand).

From a few metres away at the marina, the very open, contemporary-looking Swedish day boat cut an attractive profile, with its sleek hull, no-nonsense hardtop, and its zingy orange seating. 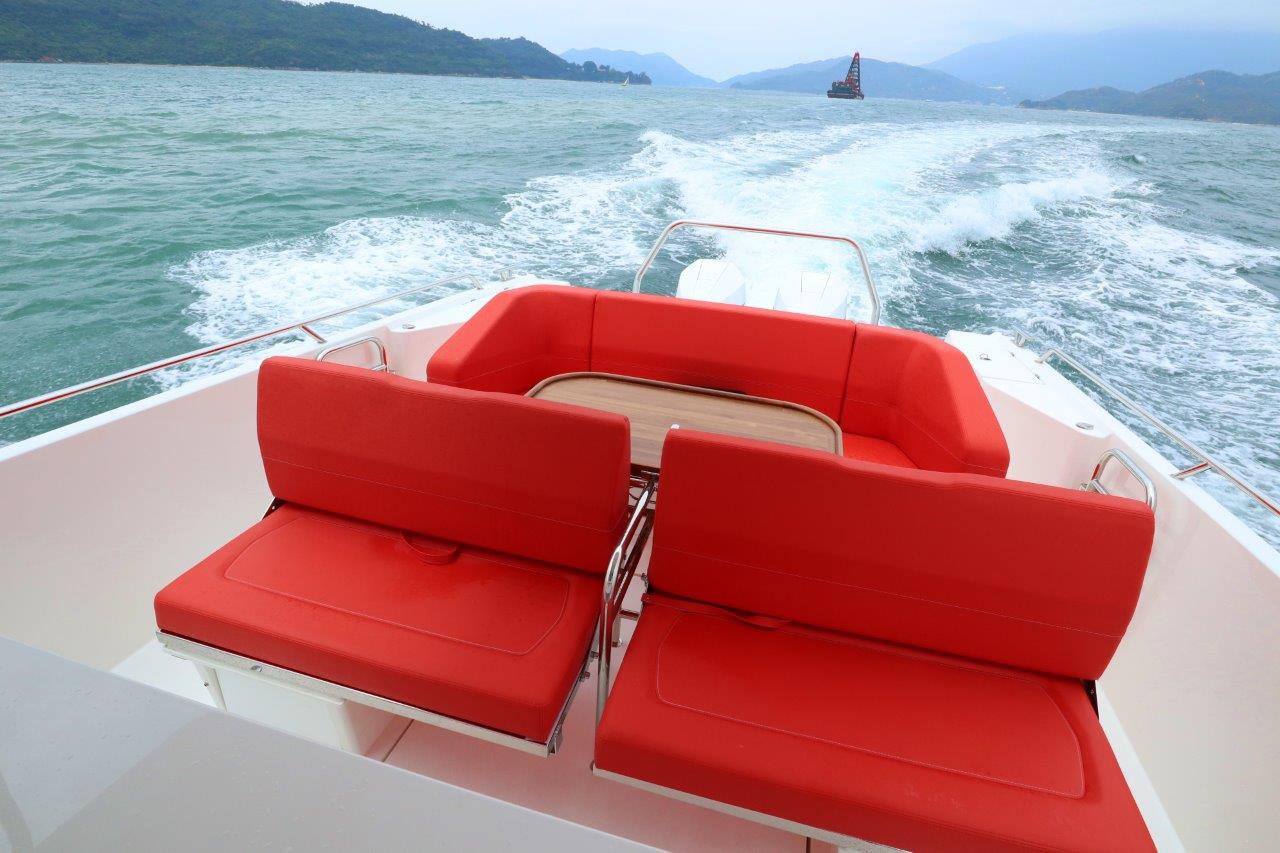 A walk around the decks reveals plenty of space for up to 12 passengers to enjoy when moored or at anchor. There is an open feel, yet the deck railings are high enough to feel safely contained. A transformable cockpit drinks / dining table in weighty marine teak has fiddled edges and rounded corners, and is set on chrome supports at the centre of a C-shape bench configuration that would comfortably seat six to nine adults. All three sections of this seating can be reversed to face the sea; the aft-facing section goes flat to extend the sun pad behind it – which, itself, acts as a lid to a sizeable hidden storage compartment that is revealed as the press of the button which activates its hydraulic open/shut control – an eight-kilowatt generator is housed here.

The whole cockpit and aft area can be shaded by a Bimini (as can the foredeck), stored in the generous concealed lazarette storage area, to free up the side decks. Adding to the feeling of quality are sturdy, wide-diameter chrome-finished rails, roof supports and stern gates, as well as heavy sunken stainless-steel side-deck hatch plates (above fuel and water tank inflow access). 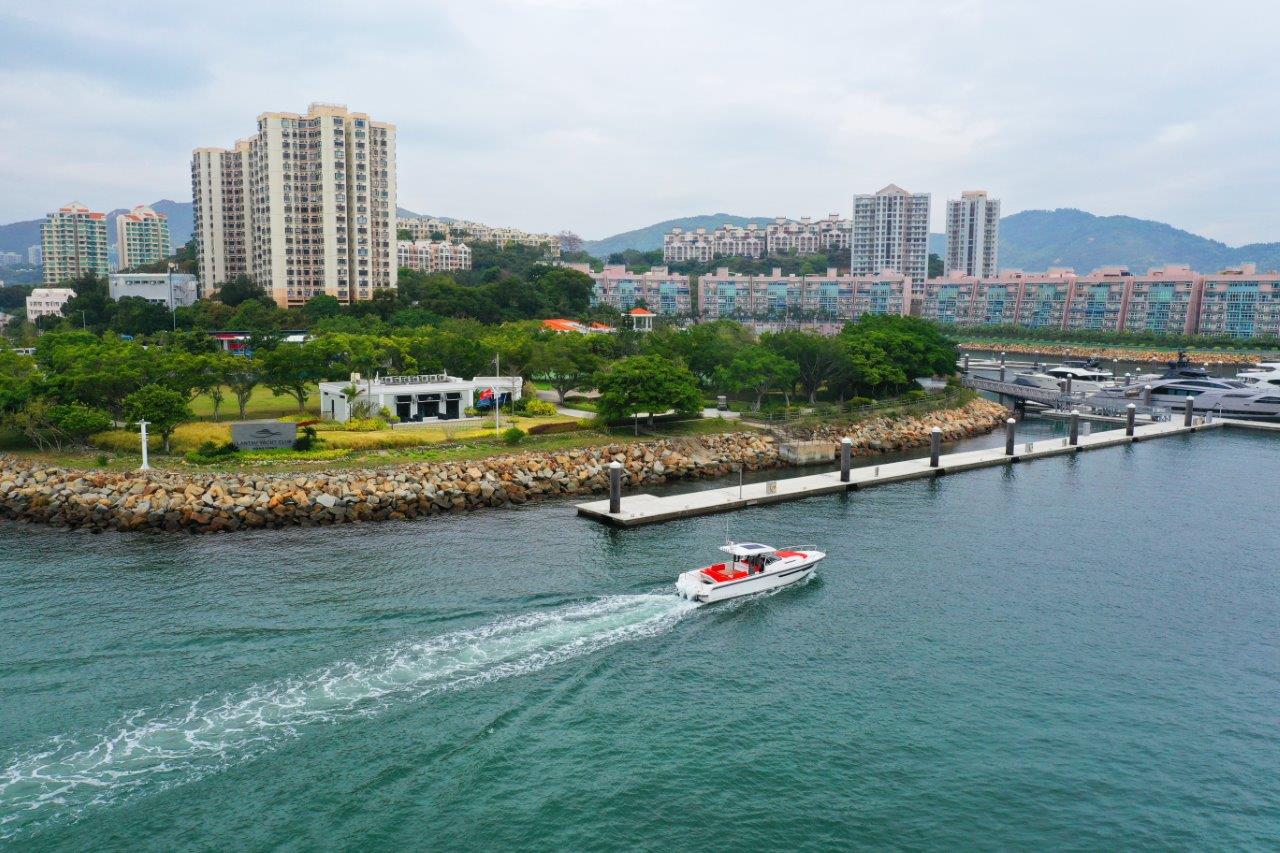 The forward area of the cockpit is home to a wet bar, covered by the hardtop. A grill station can be fitted in its countertop, a deep drawer refrigerator is fitted – the Hong Kong debut T11 was fitted with an optional additional one, which could also be a freezer, if desired. Crockery, glassware, cutlery and food and drinks storage is standard. Fusion audio speakers are set just under the roof on each side support – and they certainly carry good volume and clear range of sound (as do the separately controlled pair in the bow area).

Powering over waves and crossing our own wake, there was no juddering around the helm or its hardtop and supports

Side decks are a decent width for access and the gleaming chrome cleats are similar in size to average marina-size ones. These lead to the bow, with its sun pad, sofa seating and optional removable teak-topped table. Concealed in the bow is a locker for the anchor that’s attached to chain, rather than rope; an electric windlass and its controls are also housed here. 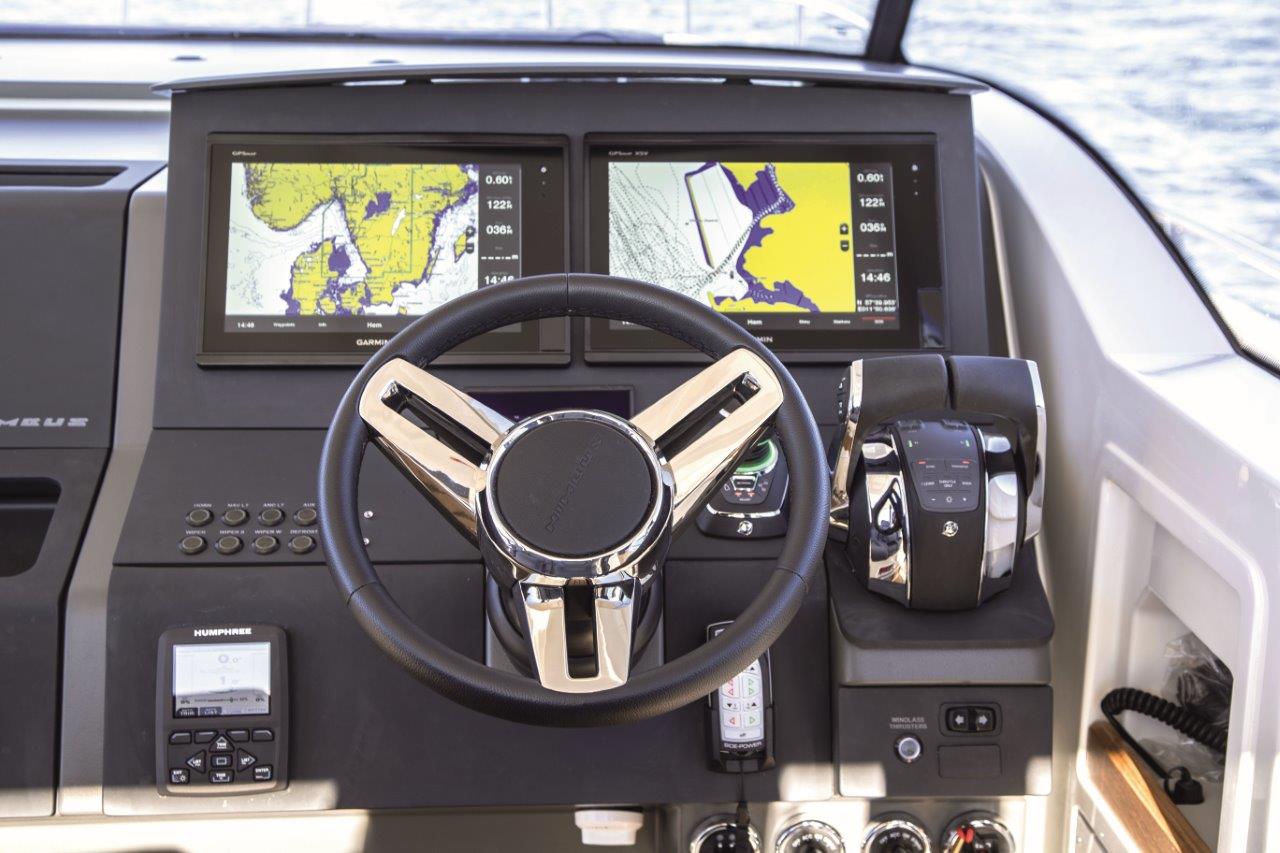 Side decks are a decent width for access and the gleaming chrome cleats are similar in size to average marina-size ones. These lead to the bow, with its sun pad, sofa seating and optional removable teak-topped table. Concealed in the bow is a locker for the anchor that’s attached to chain, rather than rope; an electric windlass and its controls are also housed here. 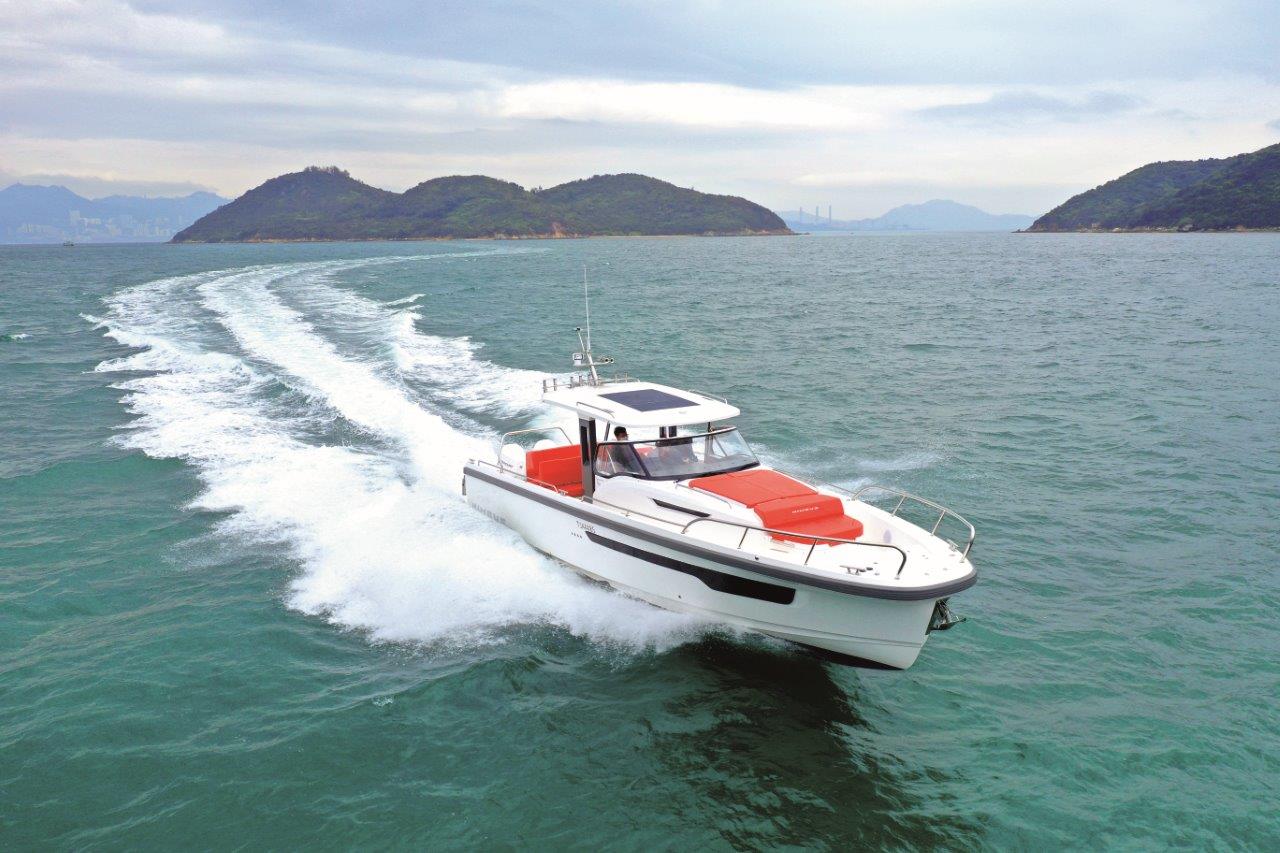 Handling is comfortable in this sturdy build

After testing the straightforward joystick controls, powering over waves and crossing our own wake, there was no juddering around the helm or its hardtop and supports. And low noise vibration harshness (NVH) outboard engine noise is kept minimal – even when underway at full throttle of around 6,000 revs per minute. And leaning into hard turns at speed, no splash of water entered the boat in our trial.

Speaking of the engines – our trial boat featured standard twin 300-horsepower outboards, options include upping the power to 350 or 400 horsepower. “With the 400, the boat does about 48 knots,” says Adam Blackmore, commercial director at Asiamarine (Nimbus dealership for Hong Kong, Singapore, Thailand and Vietnam), “but it’s the cruising speed with the biggest engines that’s the most impressive – at about 38 to 40 knots.” 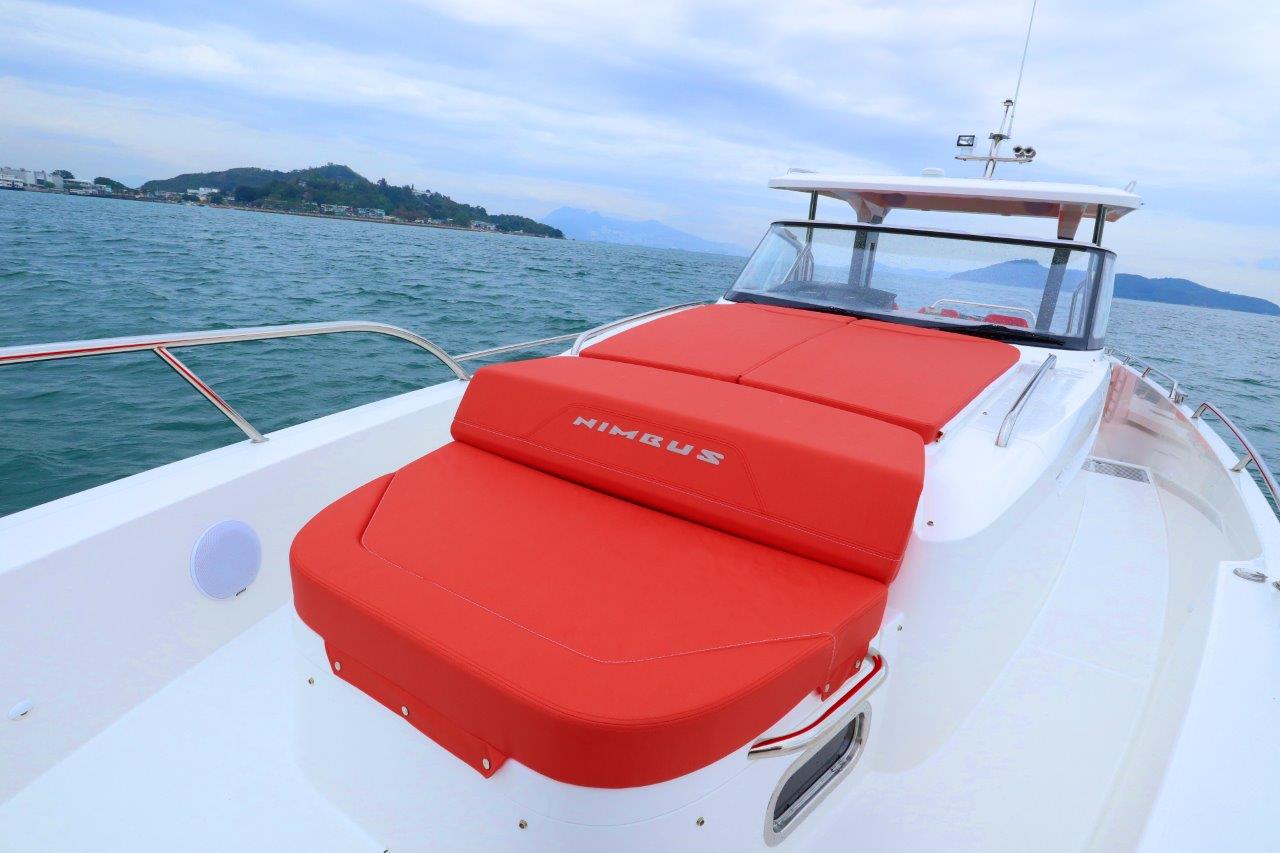 An optional electric gyroscope can be fitted in the storage area underneath the main deck sunpads.

Diesel engines – both outboard or Volvo Penta inboard motors are now also possible by request. An optional electric gyroscope can be fitted in the storage area underneath the main deck sunpads.

The fitted option of Skyhook GPS digital anchor offers peace of mind when shorthanded on the boat, as a quick sea demonstration proved. A stroll from the helm revealed the two synchronised fidgeting outboards which work in conjunction with the bow-thrusters, coordinated by Skyhook, to keep everything stable while hands-free.

Below deck are two air-conditioned double-bed cabins. The main one, forward, is open, has storage and is closest to a decent-sized ensuite head with some space around and above its shower, washbasin and WC. Amid good natural light and dimmable recessed and spot lighting, the main cabin area has a desk/dressing table, part of which can be used for a small galley area with sink, as an option. A cosy second cabin with a lower ceiling has reading lights and a little storage space – it would be particularly useful as a kids’ berth or guest cabin.
Marine teak flooring – with white, grey or black corking – is an option that can add a higher level of luxury – and this was fitted in the Thailand T11 delivery. 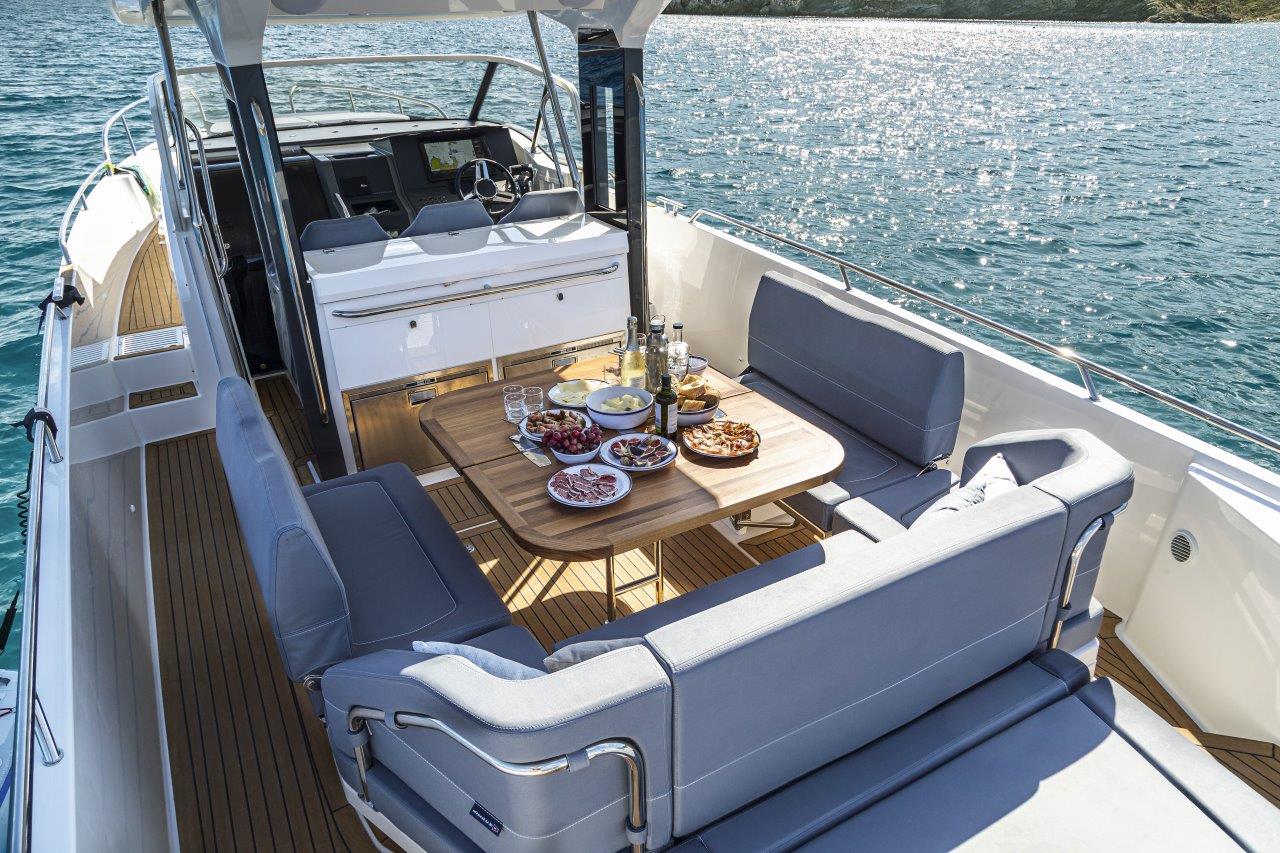 Transformable seating at the heart of the open main deck allows for dining, views outward to sea and sunbathing

With its full-size and kids’ berths, storage for plenty of toys and the use of quality materials, the T11 would make an appealing day or weekend boat option.

Two recent previous orders fulfilled by Asiamarine for similar Nimbus models indicate the T11 would also make a suitable tender for a large explorer or superyacht.