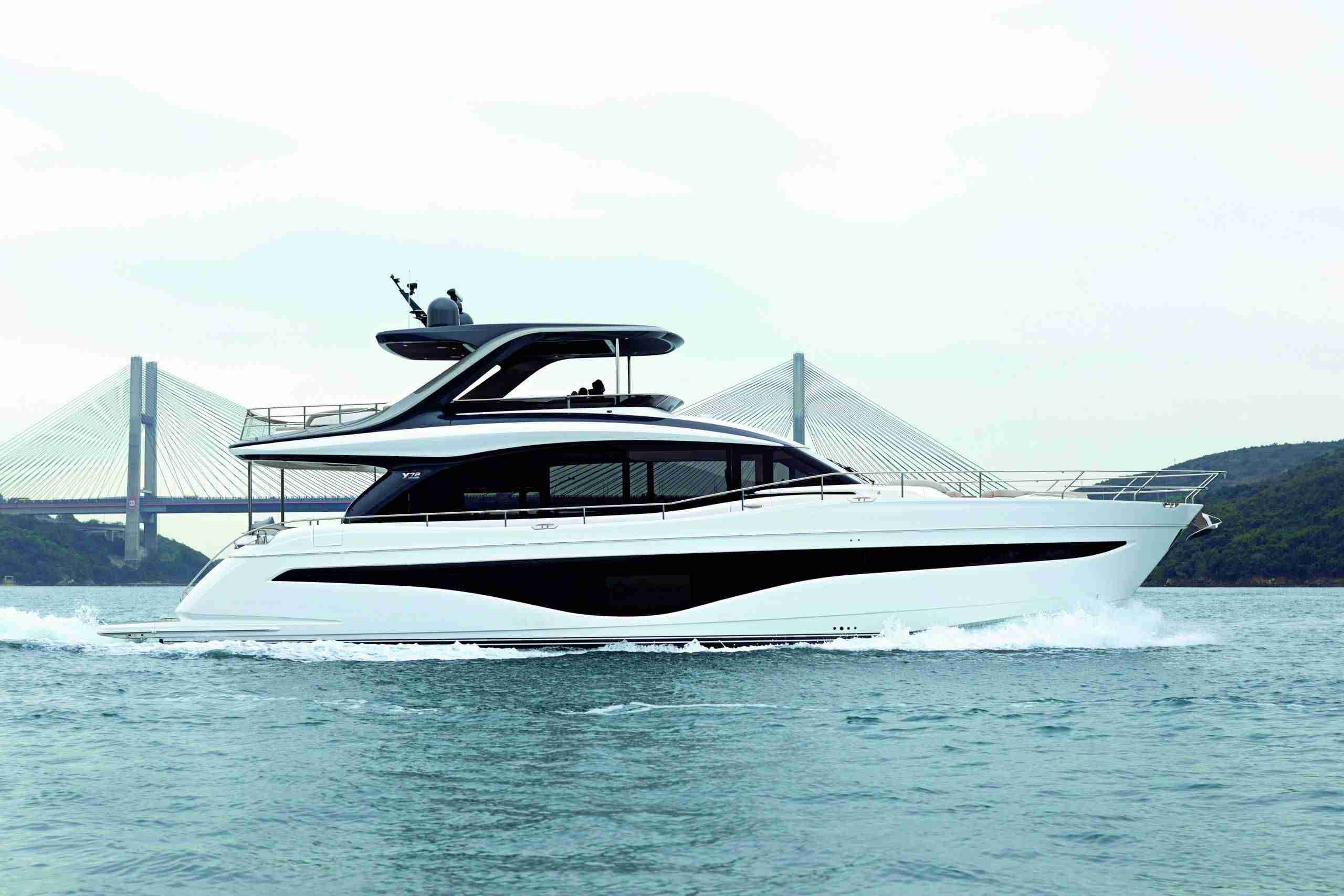 Flowing curves on the exterior are inspired by 1970s-era design

In February, the new UK-made Princess Y72, a more luxurious update to the brand’s popular F70 model, made its Asian debut in Hong Kong, when two of the first six hulls produced arrived – both to be delivered to waiting owners. “Hong Kong – and China – is such an important market for Princess; we’re the third biggest dealer in the world here, so we have key allocation for the first models,” said Adam Waters, general manager of Princess Yachts Greater China. “We also received one of the earliest boats of the X95 model coming out here, too, when that was released not long ago.” Hong Kong is still the dominant market in the China region for Princess motoryachts, with further interest in Guangdong and Hainan Island. “The 72 is the key size for Princess,” Waters explains. “They are a market leader in the 50ft-80ft [15.2m-24.4m] volume. And the 72 is right in the middle of that.” Besides introducing some all-new fittings and finishes to this higher-level line than the Princess F-Class, other additions on board that are standard in the Y72 (that were options for F-Class) are all-teak flooring on the flybridge and a hydraulic swim platform. 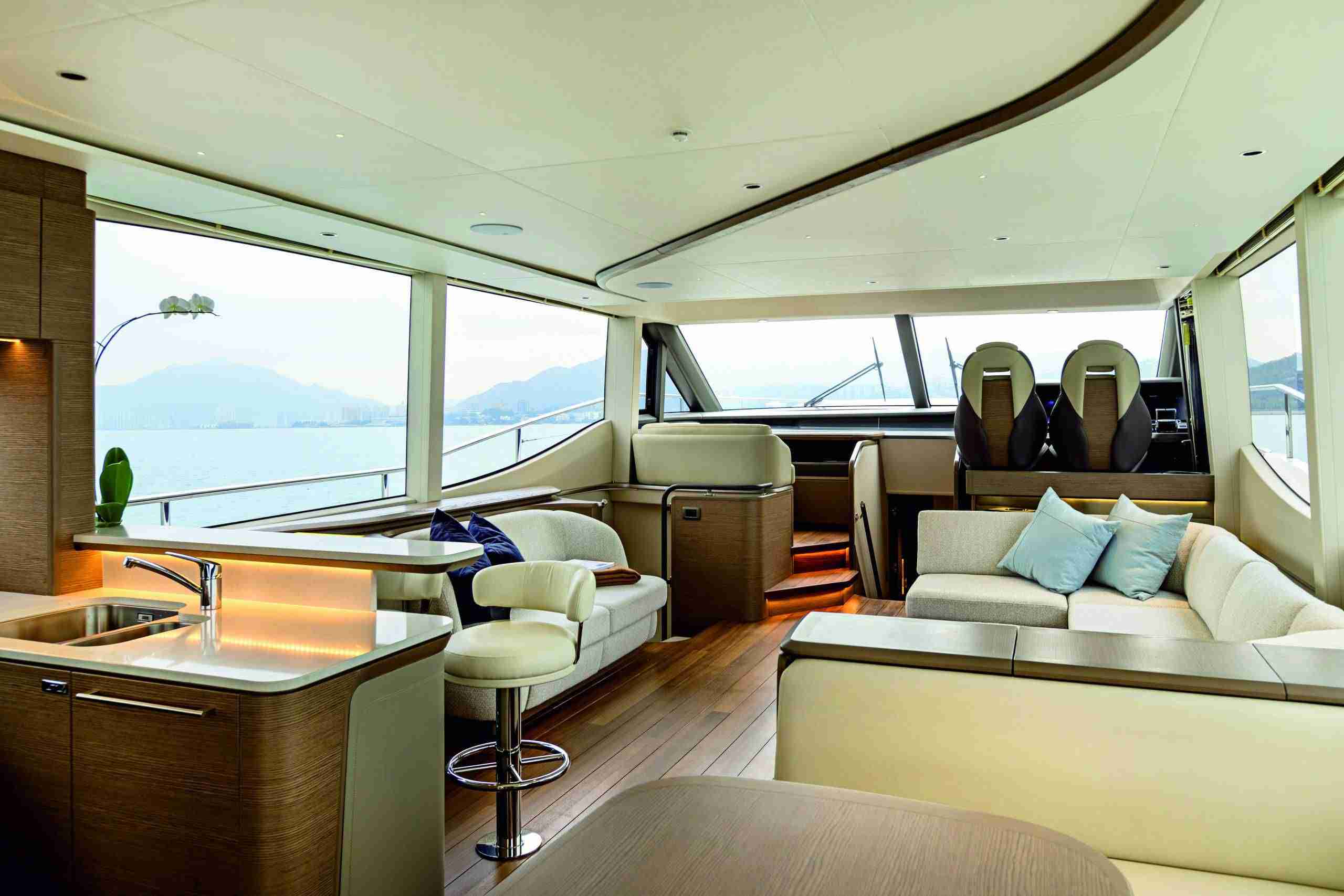 The boat’s design is split between three studios: the Princess in-house design team; long-time collaborator Olesinski for the hulls; and conceptual design by Italian house Pininfarina, which has worked with Princess for around three years and played a big part in the launch of the X series. Pininfarina, known for its aerodynamic automotive lines in brands such as Ferrari, has given a very 21st-century take on the flowing curves prominent in 1970s and ’80s product and font designs. Starting with the exterior, a sweeping stroke intersects as a dividing line between the main deck and the flybridge above it. This feature is echoed by the broad supports of the hardtop fly-deck roof option, which was chosen by the owner of the model APB experienced at a sea trial for this review. More curves and rounded corners reveal themselves on the exterior and throughout the interior of this Y72.

Boarding is via the transom’s high-low swim platform, which can hold a tender – Williams is the Princess brand of choice. A tender can also be stored at the aft of the fly deck, if a crane is installed. A hatch doorway to the starboard of a handy marine toy storage cupboard leads to a very well-finished two-berth crew cabin, shower unit and head, and then onto separate a generator storeroom and the engine room – both of which have plenty of space for access. 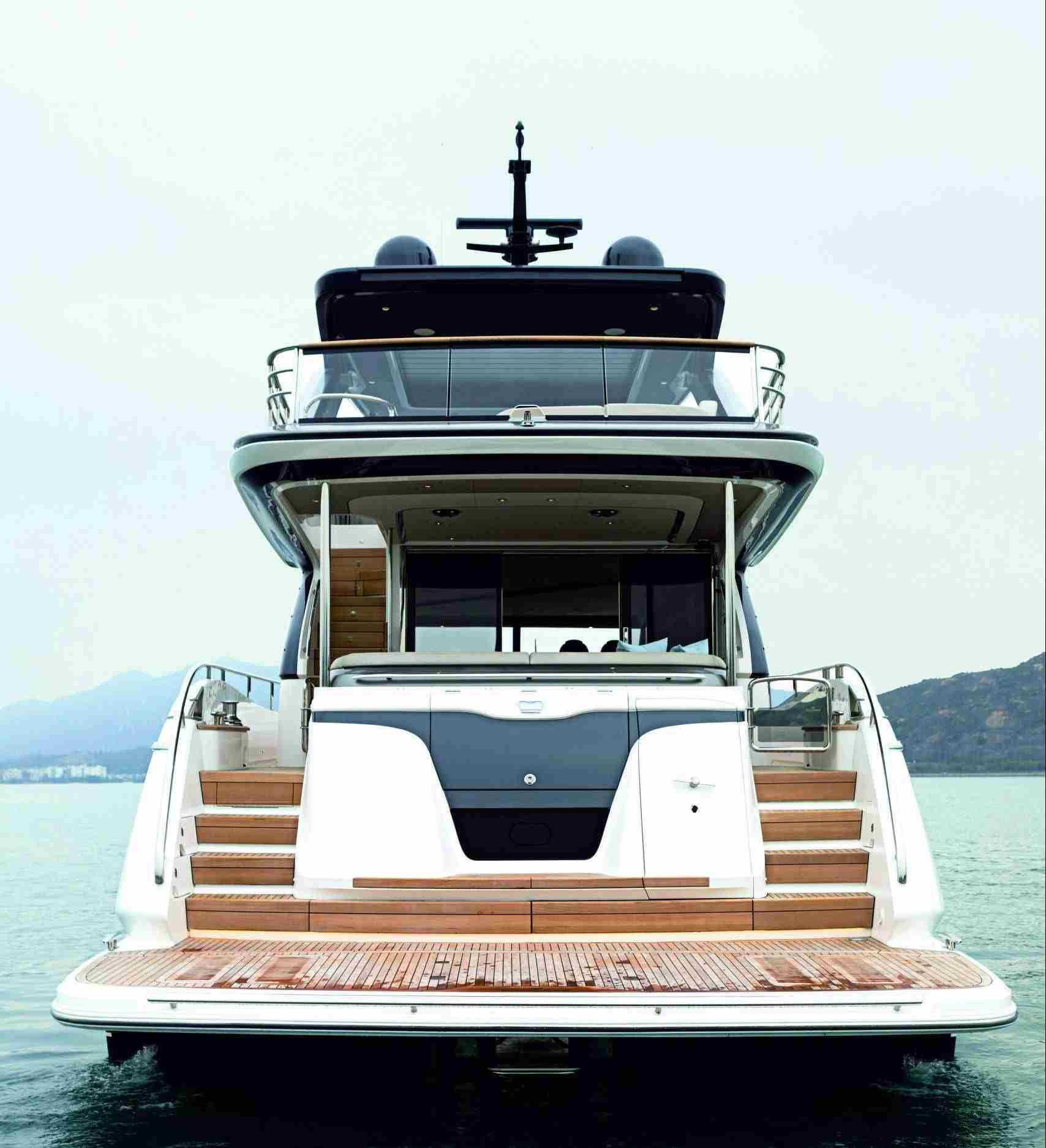 Gyroscopic or fin stabilisers can be installed on the Y72 – on our boat, the client went for Vector fins, which are highly responsive. Engines are twin MAN V12 1,650hp (1,400hp is the base engine size). A water-maker is also installed, with greater numbers of owners enjoying overnight cruising in Hong Kong waters in recent times. Stairwells up to the cockpit are surfaced on both vertical and horizontal planes with marine teak for a more luxurious look and feel. And there is no step up to the side decks, to provide the easiest access to the foredeck. A side door in the bulwark is a popular choice among Hong Kong clients, as it is often not possible to moor a yacht at the territory’s public piers. This feature makes hopping on and off much easier. The cockpit’s expandable dining/drinks table with C-shaped seating has multi-functional dimmable lighting inset in-ceiling panelling above it, which is part of a new onboard lighting system rolled out on the Y72. An aft docking station is within reach of the cockpit seating, for easier stern-to mooring. An aft galley is a new feature that straddles cockpit and saloon, when the doors to the latter are open. Installed in this position as standard, it presents a convivial flow for passengers. Princess is planning to keep the galley up, rather than forward, on the lower deck in everything in this series smaller than the Y72 – with an expandable dining table and fixed seating facing it against the aft starboard side of the saloon. There are various appliance configuration possibilities within the galley itself, and around it – on this hull, a bar counter at its inner-saloon boundary was equipped with two bar stools, making it a good casual breakfast or drinks spot. 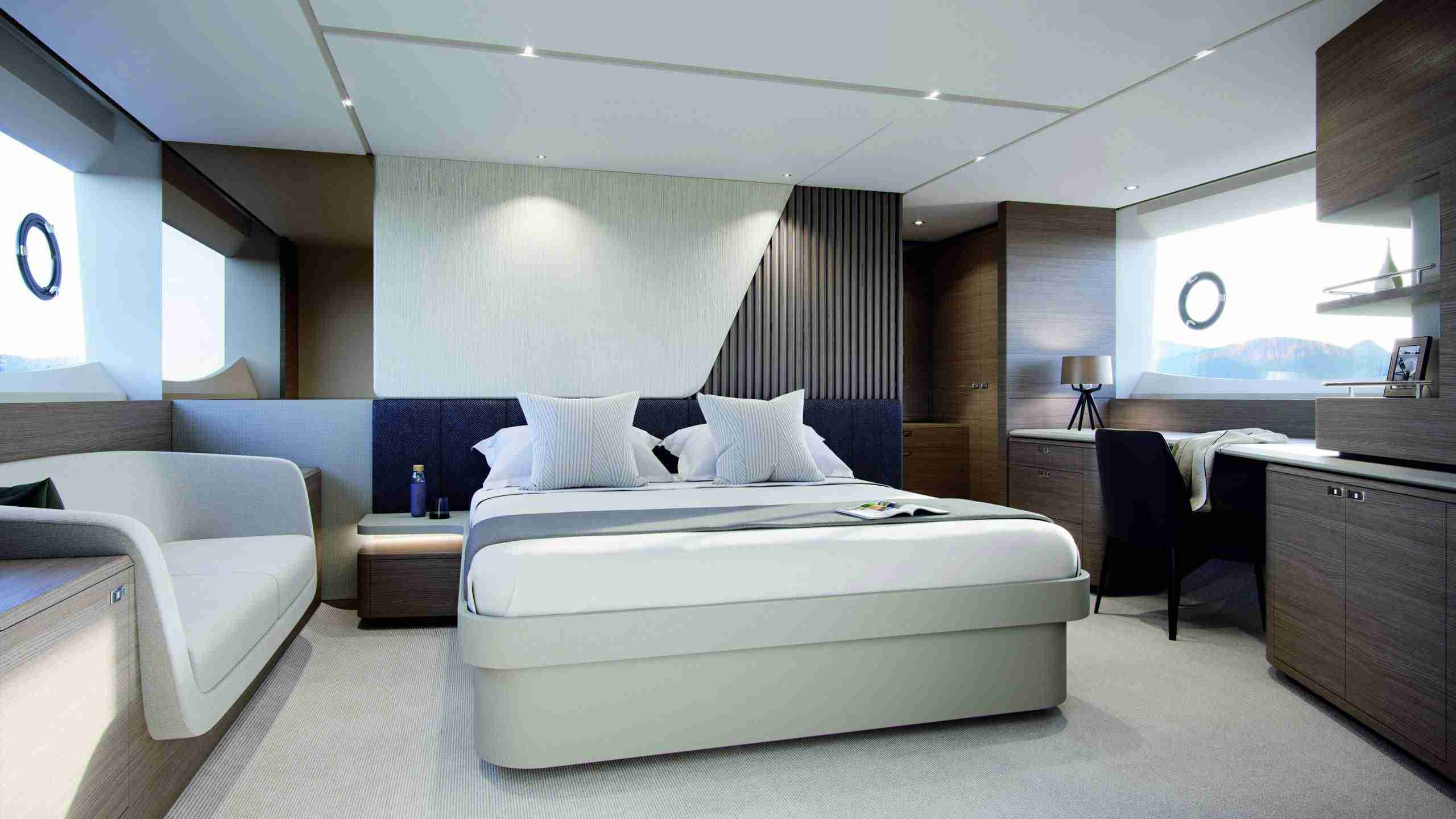 The bedrooms contain a plethora of textures and upholstery

Nearby, the lower sofa seating on both sides of the saloon (with concealed storage drawers in their bases) is the perfect height to appreciate a genuine 360-degree panorama that’s afforded by oversized windows. Forward of this lounging area at starboard is a double-seated helm – with sports car-like ergonomic design – and to its port, a companion seating nook, with a concealed mini pull-out coffee-table top. A dedicated port-side stairwell spirals down to the master cabin, while the other three cabins (a VIP suite and two twins that each convert to doubles at the flick of a switch – and share one shower and WC) are reached via stairs at the saloon’s forward. In the master, the full beam double-basin bathroom is positioned behind the headboard, creating an effective buffer that insulates from the noise of engines and generators (themselves separated by a bulkhead). In the bedroom area, to one side a desk bureau-cum-dressing table is surfaced with light-tan stitched leather; on the other, a long sofa gets plenty of natural light from the narrow window strip that lines the top of both full-beam walls. Again, as on the main deck, there are different textures and upholstery in the detailing of surfaces. As well as large wall-inset TVs in the master and VIP cabin, they also benefit from high-quality audio systems by British brand Naim, as do many other areas around the yacht.

35 knots or so was easily reached and maintained on a windy test day. The engines were barely audible, even when descending to the saloon 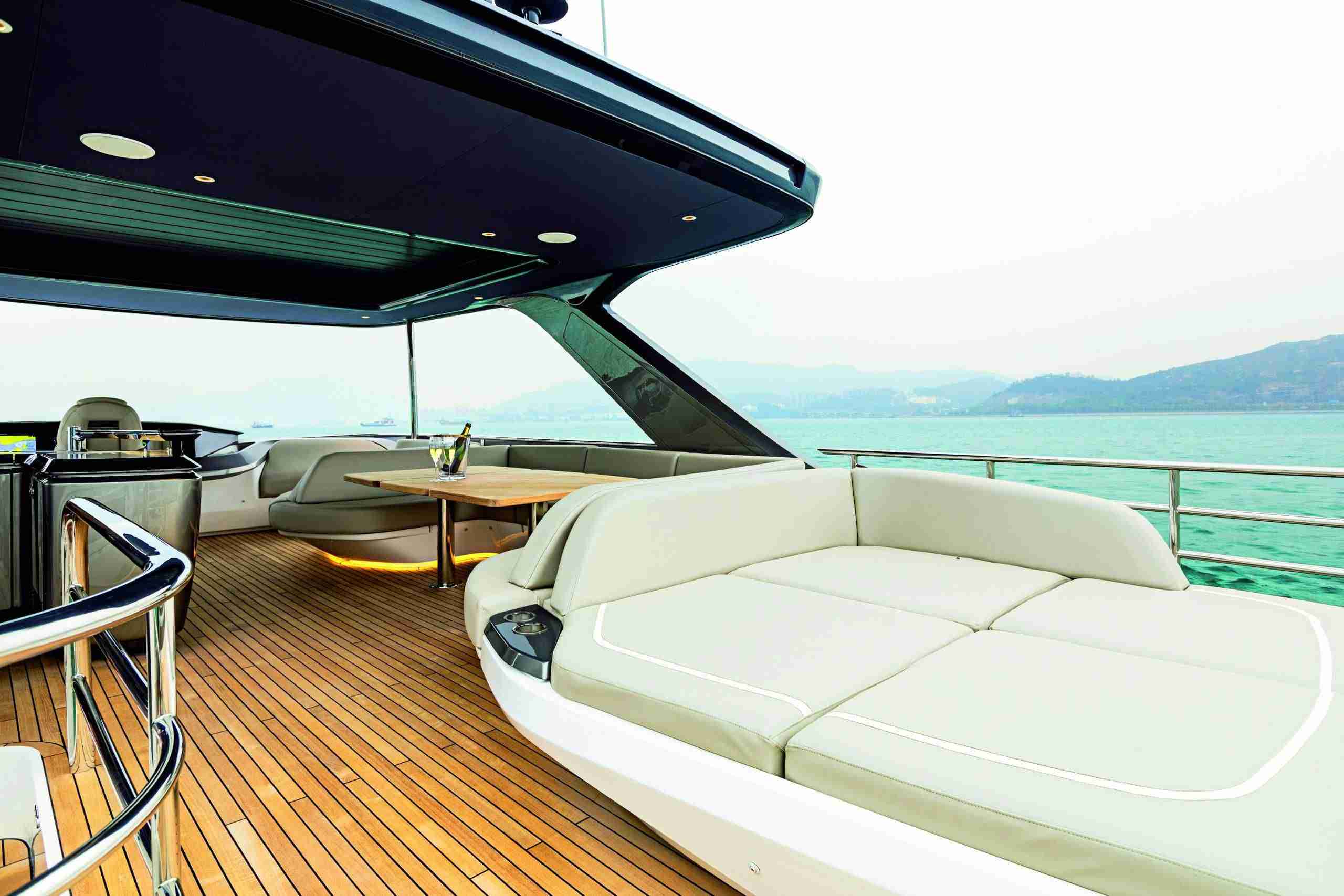 A large dining area with a transformable table lies on the flybridge, alongside a grill station and wet bar

On the flybridge, hardtops can incorporate a glass panel or an electronically controlled louvre system, which allows both light and air; a solid fixed roof is the third option. This is activated from a second two-seat helm with a comprehensive Raymarine control panel. While at sea, 35 knots or so was easily reached and maintained on a windy test day. The engines were barely audible, even when descending to the saloon. On the flybridge, a large dining area with a transformable table is opposite a good-sized grill station and wet bar. A generous sun pad zone at the fly’s aft in this particular configuration is lined with standard stylish Y72 chrome and teak railings. Foredeck fixed furniture allows a few configurations of its sofa and table, and sun loungers and handy lockers, as well as one for the anchor, are set into the deck at the bow. According to Waters, a total of five Y72s are expected to arrive in Hong Kong in 2022. “It’s perfect for Hong Kong,” he adds, “for using as a boat that lends itself well to family or corporate groups with the aft galley and generous saloon – and it can easily be operated by a crew of two.”