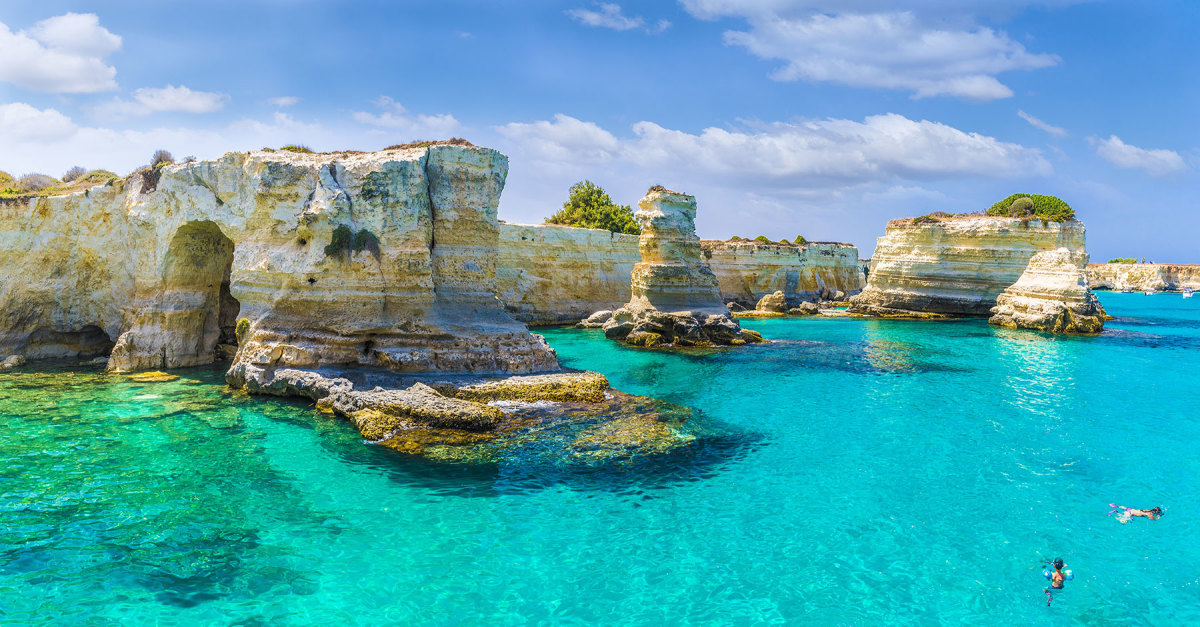 Italy’s astounding beauty is legendary. From its mountainous north in the Alps and the Dolomites to the verdant medieval hill towns of Tuscany and Umbria to the wild, sun-blistered beauty of the south in Sicily and Matera—and every place in between—it’s nearly impossible to pick the prettiest part. Add to Italy’s appeal sensational art, architecture, history and cuisine, and it’s clear why 63.2 million people visited in 2018 alone.

The bad news: that’s nearly 3 million more tourists than full-time Italian residents. Fortunately, there are still areas where you’ll need to know at least a few Italian phrases and will never once dodge a selfie stick. Puglia (anglicized as Apullia) has recently been in vogue for its conical stone trulli dwellings and the handful of beautiful towns (Ostuni, Polignano a Mare, Monopoli) strung like pearls along the coast between Bari and Brindisi. It’s a wonderful area to visit, but if you want to see something really spectacular, get off the beaten path and visit Puglia’s Salento region.

If Puglia is the heel of Italy, Salento is the tap on the end of the stiletto. Only 40 miles separate the Ionian Sea just south of Taranto and the Adriatic Sea at Brindisi, Salento’s northern border. At the bottom of the peninsula, it narrows to fewer than 8 miles across. You could walk from one sea to the other in a couple of hours—but there’s no better way to see this region than by boat.

From Gallipoli to Torre Vado, long stretches of shallow turquoise water, gentle waves and white sand beaches line the coast. It’s no wonder that the restaurants and lidos in August are packed with bronzed families enjoying pizza, gelati and Aperol spritzes. To explore this part of the shoreline, dock near Gallipoli’s old city, which is an island connected by a causeway to the newer city. Marina Yachting Portolano has dock space for boats up to 78 feet (23.7 meters); Marina Bleu Salento to 147 feet (44.8 meters).

Gallipoli is an ancient fishing town that’s become a hot spot for young vacationers. Winding narrow stone streets cross the island, which has retained the Greek flavor of its history. A fleet of bright-blue wooden gozzi bob near the Castello di Gallipoli, a 13th-century Byzantine fort on an 11th-century foundation. Fishermen along the wharf offload catch and mend their nets. On the Riviera Cristiforo Columbo, a few now have shops where they weave and sell handmade nassa, traditional reed basket-traps. Gallipoli is full of good places to eat fresh seafood, drink, dance and shop.

Less than 50 nautical miles south is Santa Maria di Leuca, a charming seaside resort at the tip of the peninsula. Just behind its breakwater is the Porto Turistico Marina di Leuca, which accommodates vessels up to 131 feet (40 meters). Faro di Leuca, a lighthouse, looms over the town, marking the western entrance to the Strait of Otranto and the Adriatic Sea. Nearby is the Basilica Santuario Santa Maria De Finibus Terrae, built on the former site of a Greek temple dedicated to Athena and connected to the port by a 284-step staircase. Benito Mussolini commissioned a monumental waterfall here, ending at a Roman column, to commemorate the completion of the Puglia aqueduct.

Leuca is known for its strikingly whimsical villas and a seaside promenade lined by restaurants—some with tables so close to the sea that your prosecco may taste salty. Take your tender and follow the local tourist boats to explore the remarkable caves between Leuca and Torre Vado. They are wonderful places to swim.

If you’re bound for Greece or Montenegro, allow an extra day or two for the 30-mile detour up the Adriatic side to Otranto. Rounding Leuca’s point and heading north, you will see a wildly different side of Salento. The high cliffs striped by rock-lined terraces and studded with olive trees are otherworldly stunning. This dramatic, rocky coastline has dozens of azure grottoes and charming swimming holes.

Anchor off Marina Novaglie and have lunch at Lo Scalo, on a terrace that overlooks a cyan harbor where daredevil kids cliff-jump. Visit the hillside harbor of Porto Tricase for superb fresh fish and sublime seafood pasta at Taverna Del Porto, one of Puglia’s best restaurants.

Otranto, a lovely city, tumbles downhill to a crescent-shaped beach and a harbor full of boats. Its Castello Aragonese dates to the 1400s, but the must-see attraction is Otranto Cathedral. Built by the Normans in the 11th century, it incorporates Romanesque, Byzantine and early Christian styles of architecture. Its crowning jewels are underfoot: a fantastical 12th-century mosaic depicts a tree of life springing from the back of two elephants, heaven and hell, the Garden of Eden and the Tower of Babel. It survived a 15th-century Ottoman siege in nearly perfect condition. Like Salento, it is one of Italy’s lesser-known but greatest treasures. Get Ready For A Winter Dream