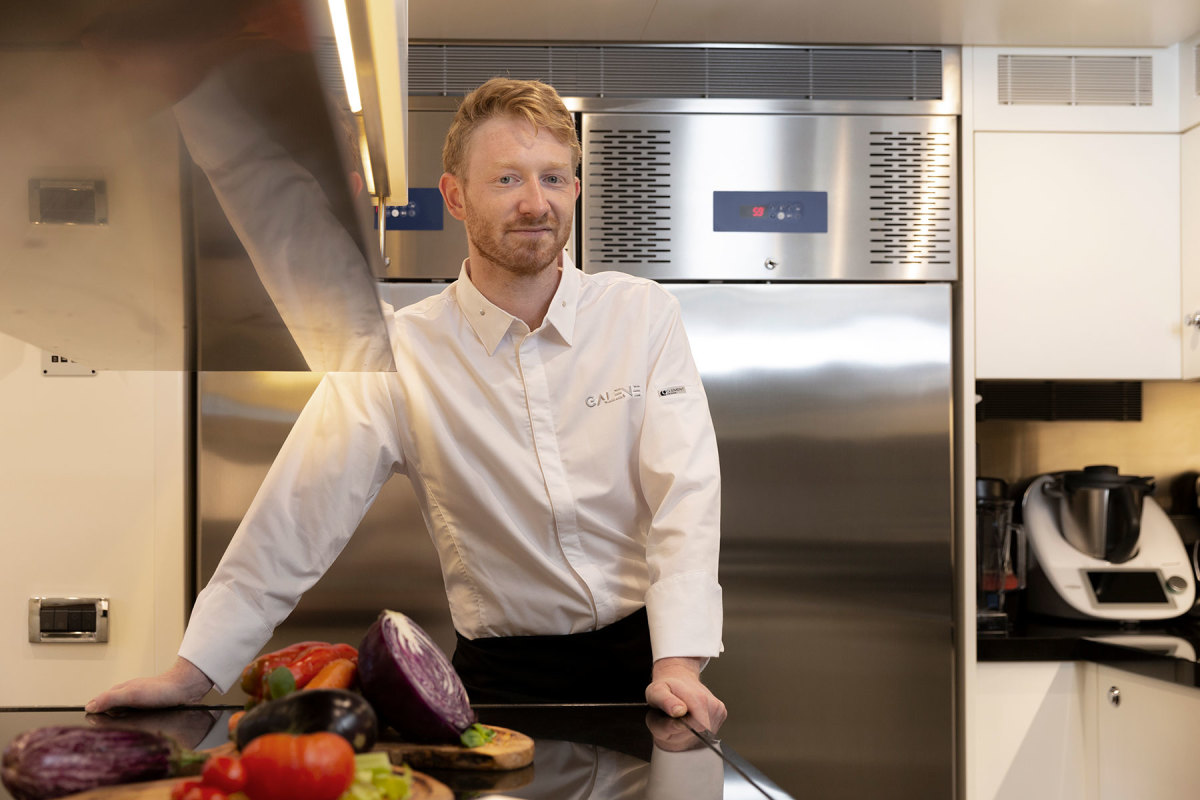 Jack Brown, the 31-year-old chef aboard the Amels 180 Limited Editions Galene, is as straightforward as his name sounds.

“I reckon my name is very English,” he says with a laugh, “easy to pronounce and not hard to spell.”

Brown is responsible not only for creating scintillating repasts for 12 charter guests, but also for cooking healthy meals for the yacht’s 13 crewmembers to power them through busy days.

“You have to be flexible when working on a yacht,” he says. “Plans are always changing. Guests tell you that they are going to eat ashore for lunch, then at the last minute they change their mind and decide they would rather eat on board.”

Brown seems unflappable. Quick on his feet, he thrives on the challenges of being a yacht chef.

“I usually wake up around 6:15 a.m., pop the croissants in the oven, and while they are baking, I sit on deck with a coffee and contemplate the rest of the day’s meals,” he says.

Born and raised in Surrey, on the outskirts of London, Brown says he was a terribly fussy eater as a kid. He began his culinary career at age 11, preparing weekend dinners for his parents, his older brother and his younger sister.

“Neither mum nor dad were gourmet cooks. My father was supposed to make dinner on Saturday nights,” Brown says. “I helped him with meals such as spaghetti Bolognese, and since it was fun for me, I ended up taking over completely, making up recipes, doing twists on things like bacon and chicken pot pies.”

By the time he was 15, Brown eschewed academics and went to vocational catering school for four years. As part of his coursework, he did hands-on intern rotations at restaurants. Upon graduating, he worked at fine dining establishments around London.

Brown soon sought a life beyond London. He headed for the French Alps, where he was a private chef in ski chalets. He was thrilled to be in an environment where he could ski and snowboard.

“I like a cold weather environment,” he says. “I am ginger-haired and fair-skinned, so I tend to burn when I am in the tropics.”

Next, Brown traveled to New Zealand and Japan, picking up chef stints and continuing to expand his culinary repertoire.

While a penchant for skiing and boating often go hand in hand, Brown says he simply fell into a career as a yacht chef—after seeing Facebook posts seeking onboard chefs.

“I did a bit of dinghy sailing as a boy, but I think I was more passionate about skateboarding, to tell the truth,” he says.

Galene is Brown’s second yacht. He feels lucky to have been hired when the yacht was still in build, giving him input about the galley equipment.

“Galene, launched in 2020, was the 25th Amels 180, so the galley layout had already been well established,” he says, “but I was given free rein to purchase the high-end appliances of my choice. It was such a treat. I felt like a kid in the candy shop.”

Brown’s girlfriend, Zoe, is a deckhand on board. He continues to enjoy sports such as skateboarding, skiing, snowboarding and kitesurfing, and to travel. His other favorite pastime is eating in restaurants, especially at the River Café and Ottolenghi in London.

While still British to the core, Brown says he now favors variations on Mediterranean-style cooking. He has obviously moved on from bacon and chicken pot pie.◊

What is your go-to dish at home with family and friends?

Well, this sounds very boring and English, but I would most likely make a standing rib roast, roast potatoes and vegetables. I know my butcher in Surrey very well, and he makes sure I get the best cut of meat.

What was the oddest request you have had as a yacht chef?

I once had a guest come aboard with a suitcase full of frozen kosher chickens and wanted them to be the cornerstone of every meal.

What spices or condiments do you always have on hand?

Maldon sea salt and cabernet sauvignon vinegar. It peps up sauces, marinades and just about everything.

What brand of knives do you use?

I have a friend who used to be a chef and then went into the business of creating custom-made knives that are an absolute work of art—Bodman Blades. I use his knives.

What is your signature dish?

Well, I am quite versatile and don’t really have one, but I do have a dessert that is always a hit: chocolate nemesis, a flourless chocolate cake with crème fraiche, and cherries marinated in kirsch.

If you were not a chef, what would you be?

Perhaps I’d be a ski instructor.