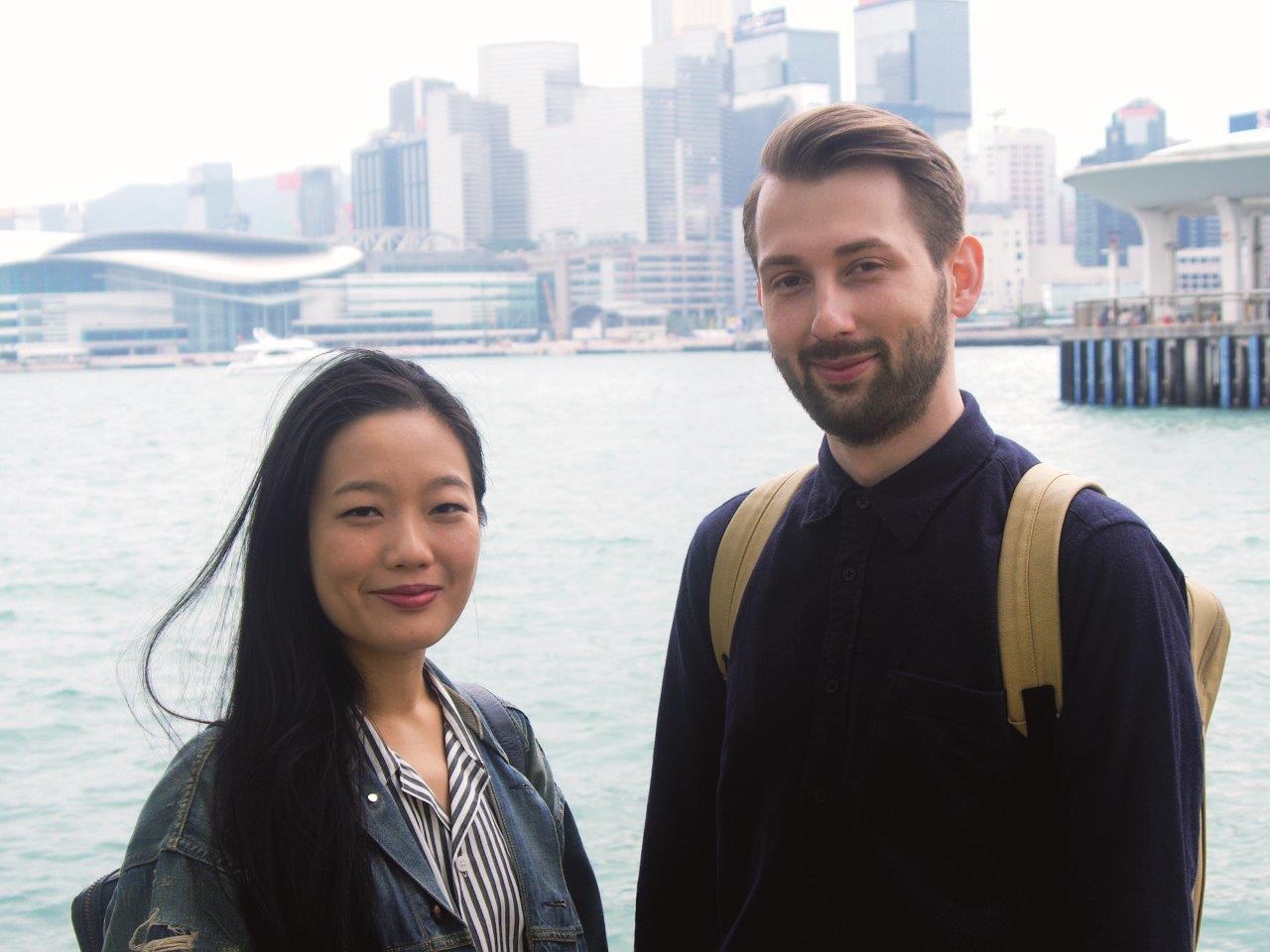 Christine Lew and Florian Wegenast, designers and co-founders of Studio Florian and Christine in Hong Kong

Ever since their studies at the prestigious Central Saint Martins College of Art and Design in London, designers Florian Wegenast and Christine Lew have been fascinated by the intersections of science, craft and sustainability.

They co-founded Studio Florian and Christine as a two-person multidisciplinary design operation, and in 2019 engaged in a major project in Hong Kong: trawling through the city’s trash-strewn harbours on a small boat and combing beaches for waste glass, plastic and metals, as part of a critically acclaimed project called Future Sea Craft. 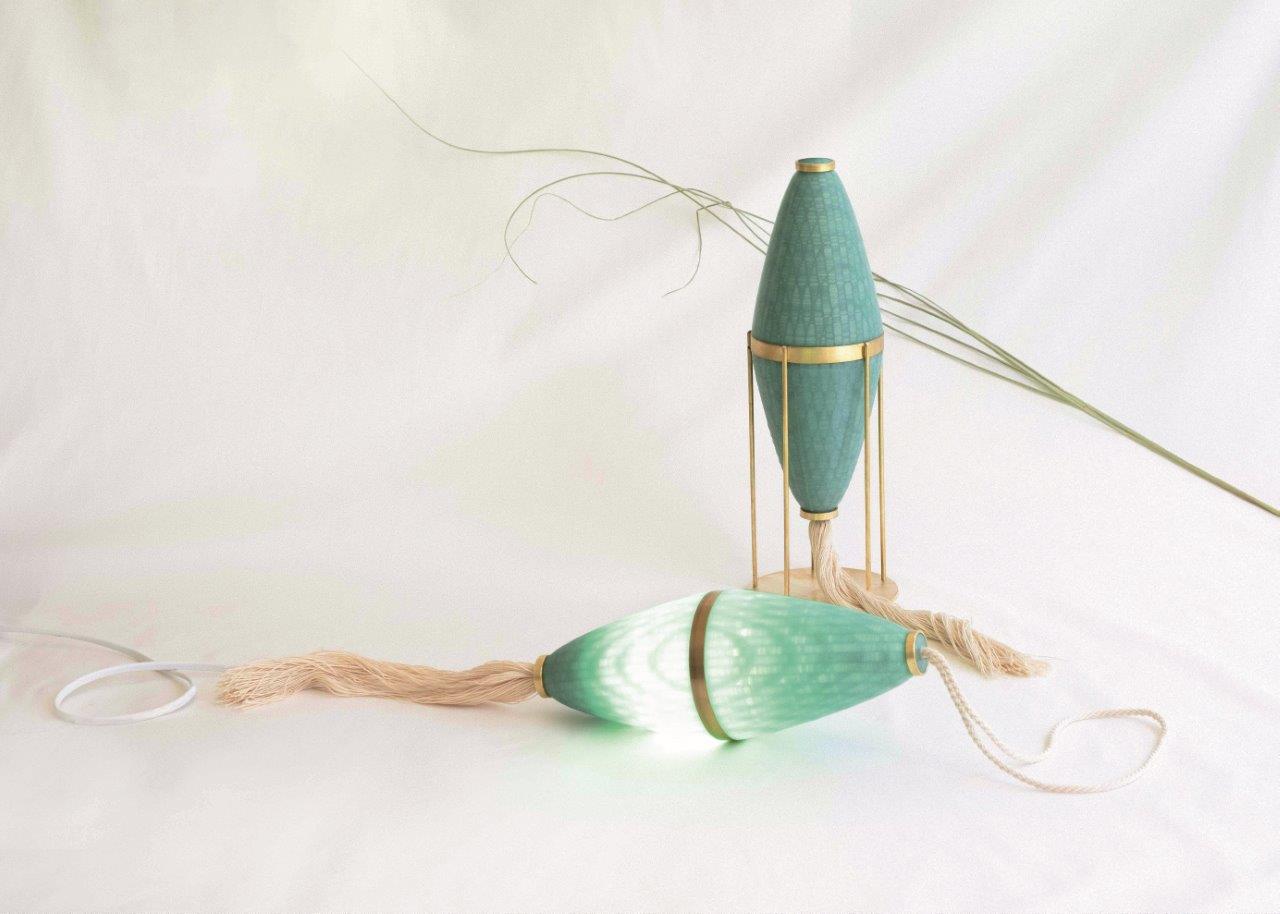 The plastic and glass garbage they collected during a number of community beach cleans was upcycled into exquisite objets d’art. These were later displayed in several prestigious galleries and exhibitions, including the Design Society in Shenzhen, which operates in partnership with London’s V&A Museum.

Over recent years, the studio has undertaken a series of design projects focused on upcycling waste materials while highlighting traditional crafts and processes.

“These gill nets only have a life cycle of about seven to 14 days; once the fish get entangled and the net tears, it is thrown away – they are not repaired like in the old days.” – Florian Wegenast

During a recent residency at Hong Kong’s The Mills Fabrica, an incubator for sustainable textiles, Lew and Wegenast were tasked with researching the potential of upcycling discarded fishing nets. So they visited the historic stilted fishing village of Tai O in the extreme west of Lantau Island. With help from the Tai O Cultural Society, the two designers learned that while local fishermen still practise the traditional craft of hand-weaving fishing nets, this craft is fast being superseded by the use of prefabricated lightweight nylon filament nets, used as gill nets. 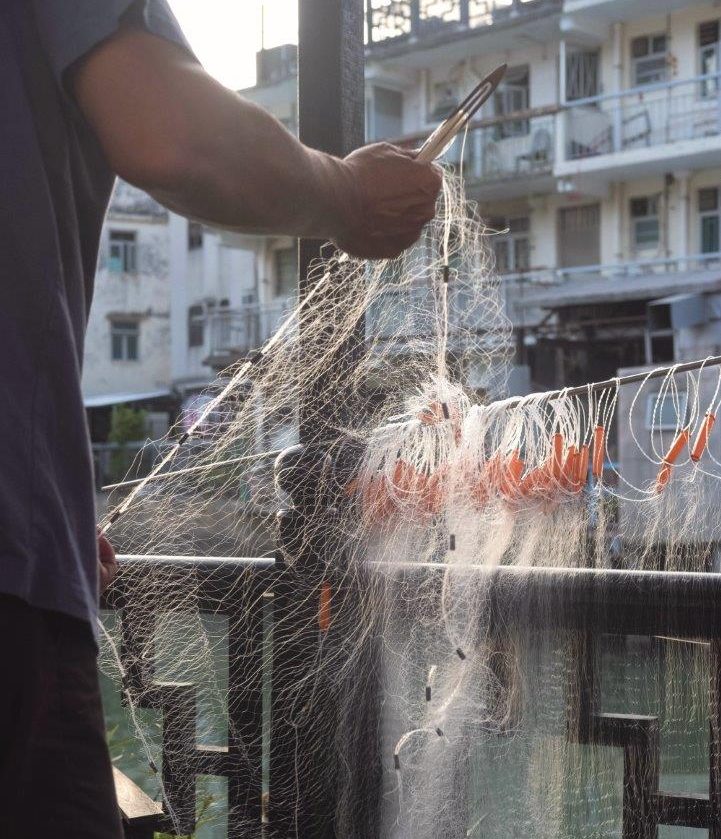 “These gill nets only have a life cycle of about seven to 14 days; once the fish get entangled and the net tears, it is thrown away – they are not repaired like in the old days,” says Wegenast.

Fishing nets are a major environmental problem in Hong Kong and across the Asia-Pacific region. Abandoned fishing gear or ‘ghost nets’ can continue to trap fish and invertebrates after they are discarded; they break down into hazardous microplastics, present a navigating hazard to pleasure vessels and present an eyesore on local beaches. 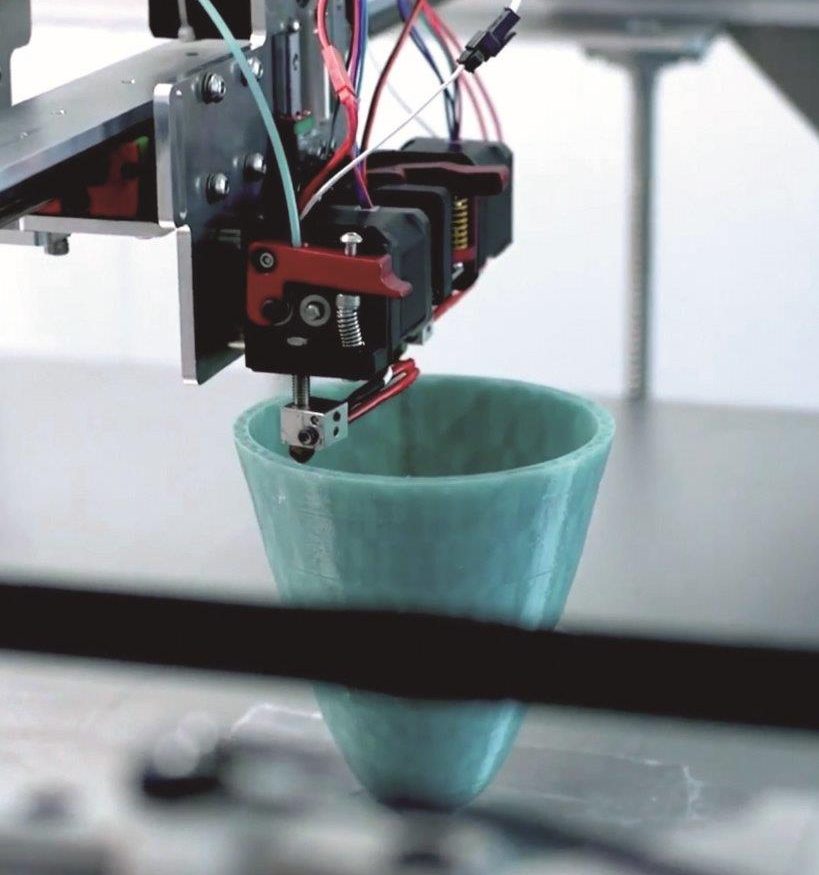 The Tai O lamp is 3D-printed

It has been estimated that fishing lines, ropes and nets make up 52 per cent of all plastic pollution in the accumulation zone known as the Great Pacific Garbage Patch. A report published last year by The Nature Conservancy calculated that more than 45 million kilogrammes of plastic from industrial fishing gear pollute the oceans each year – threatening marine life.

“When we first went to Tai O, we were interested in the hand-weaved fishing nets, but we saw wooden floats with loads of discarded nylon nets piled high,” says Wegenast.

The objective had been to design and produce a lamp inspired by the traditional lanterns hung during village festivals that used recycled materials and would also draw on the local craft of net weaving, while highlighting a potential marine environmental catastrophe. The designers wanted to utilise the latest 3D-printing technology to create a lamp from the material recycled from fishing nets.

“We wanted it to see if we could recycle this material, but it was really difficult because the samples had been left in the sun and were extremely brittle – there was no structural integrity,” says Wegenast.

It left the pair with a design dilemma: how could they use modern design technology to showcase the problem of plastic pollution from nylon fishing nets and also pay tribute to the traditional handcraft of weaving? After an extensive search, the two designers found an organisation in the UK that had just launched a new high-quality nylon filament product, recycled from fishing nets from the coast of Cornwall, southwest England, suitable for 3D printing. They formed a partnership with the group called Fishy Filaments and started work on the lamp design. 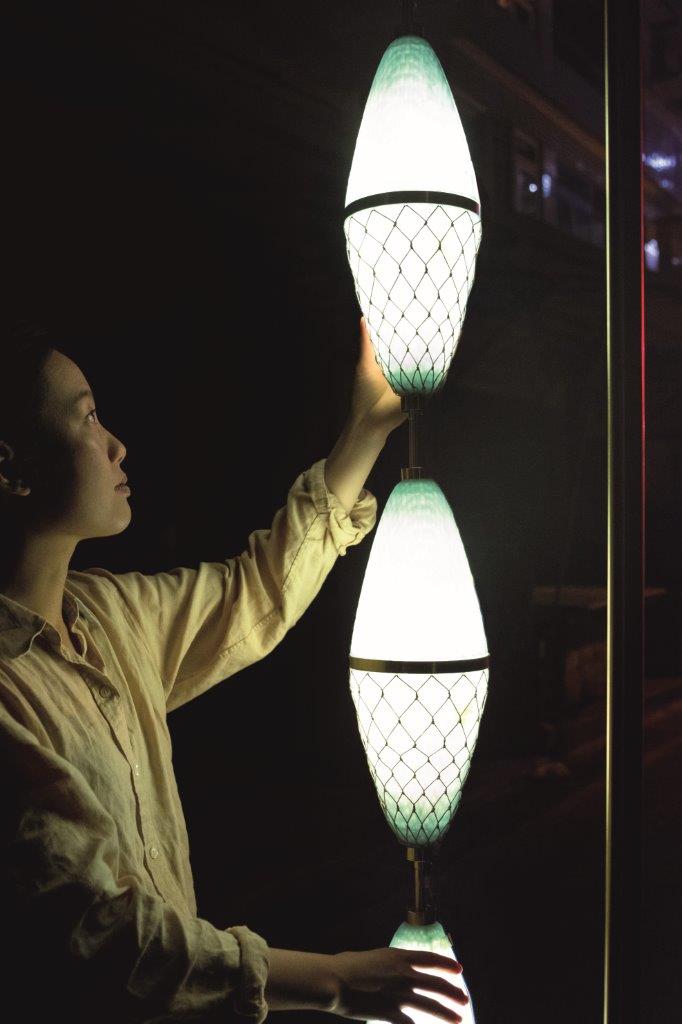 This methodology of using high-low craft and incorporating heritage and innovation resulted in a final lighting design object that reflected how both old and new crafting processes could be made relevant for modern design. “We focused on a lamp concept using 100 per cent recycled fishing net nylon,” says Lew.

After intensive studio work, they achieved their objectives, and their Tai O lamp was displayed in the village during the annual Mid-Autumn Lantern Festival against a backdrop of glowing red Chinese lanterns. And it included the traditional hand-weaved nets in the design. 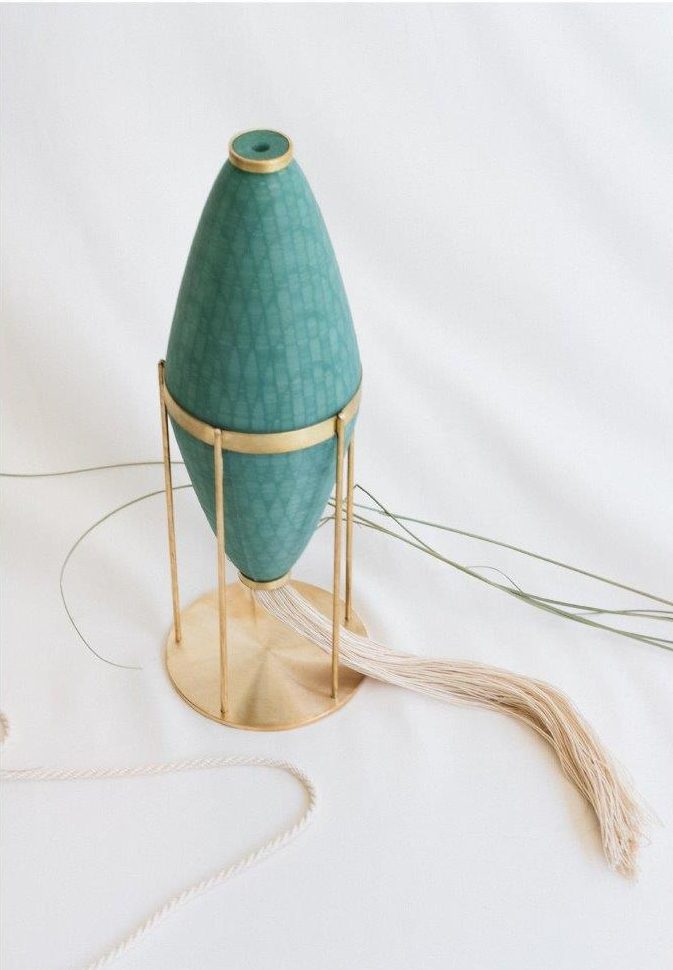 The Tai O desk lamp was a hit on Instagram

It was a huge success, but the designers realised it would be difficult to recreate the Tai O lamp in mass numbers, so they explored a smaller desk lamp design, inspired by the Tai O project and using similar materials. “The [table] lamp is 3D printed, so it’s really a limited edition – it still takes hours to produce,” says Wegenast.

When they shared the images of their Tai O desk lamp on Instagram, they received a number of commissions for similar pieces.

Studio Florien and Christine is further investigating recycling the local disused gill nets, but the designers both think it would be difficult to achieve 100 per cent recycling. They are also exploring the creation of larger pieces using the Fishy Filaments recycled material from fishing nets and will be launching a commercially produced version of the Tai O desk lamp later this year.