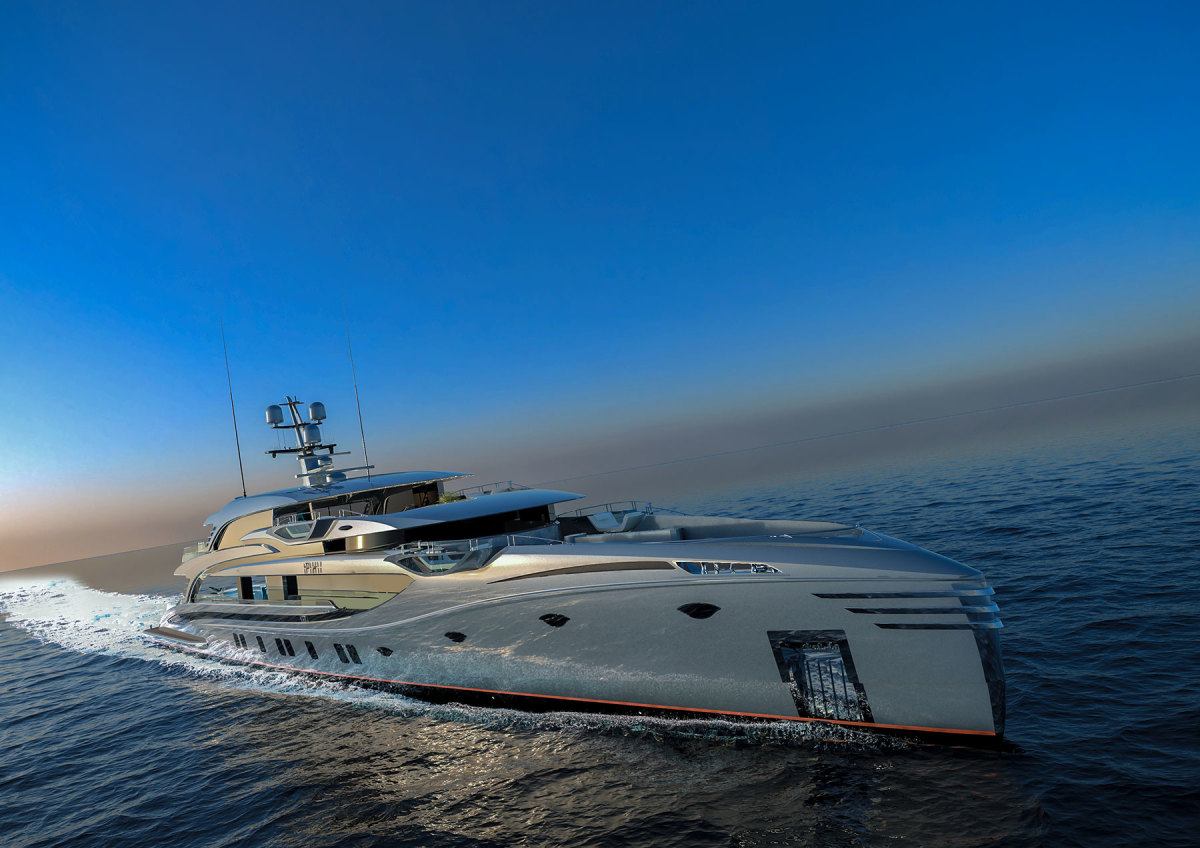 Lifting the veil on the radical, fast displacement aluminum motoryacht PHI in build at Royal Huisman, the builder says PHI will be the world’s longest motoryacht below 500 GT.

At 192ft (58.5m), PHI’s low hull and superstructure profile are considered by outsiders to be a great challenge to engineer and build. But Royal Huisman has delivered over thirty low-profile sailing superyachts and is not intimidated by the prospect of fitting complex motoryacht systems and technology into sleek, low hulls.

Cor D. Rover, responsible for PHI’s general concept, exterior design & interior layout, explains the design philosophy: “Rather than just building a large yacht on a so-called shipyard ‘platform’ to enjoy the pleasures of being at sea, the Owner of PHI wanted to build a yacht with a profound underlying story, a deep-rooted knowledge that runs through all aspects of the yacht, from her exterior appearance all the way to internal experience. After a lot of internal deliberations at our studio, exploring numerous concepts, we discovered the rich and detailed story behind the symbol PHI *). Evidence of this is all around us. The more you study, for example, growth sequences in nature, the more amazed you become. The perfect mathematical way that a Nautilus shell or a Sunflower grows is truly amazing. Some call it coincidence, others call it natural evolution, I, being a spiritual person, will definitely call it “Divine”.

With Van Oossanen’s XL Fast Displacement Hull Form, PHI will be extremely fuel efficient. Given the fact that there are no electric chargers between the Azores and the Caribbean, this is the best thing we can reasonably do at this moment, trying to burn as little fossil fuel as possible until the day renewables will be the reliable mainstream.”

Guy Booth, Owner’s representative and project manager comments: “From the early days, it was fairly clear that this Owners vision would take a unique combination of some extraordinary skills. The Owner knew that he wanted a deep, intelligent and thought-provoking core concept, that reflects elements of several great personal interests. We initially met with six or seven of the most pedigree yacht designers in the world. There was something about Cor [D. Rover]’s approach that resonated with the Owner, asking thousands of questions, and proposing thousands of crazy ideas. In the early days, no one had any answers for the Owner. It took Cor and his team almost a year of deliberation before they eventually proposed the idea of ‘PHI’, how it related to the Owner, and Cor’s vision of how it would translate into design. From this moment, she has always been ‘PHI’. With such a powerful vision, a demand for the absolute highest level of quality available anywhere and such difficult engineering challenges, Royal Huisman were clearly the best partner to build the boat.”

Complementing motoryacht PHI will be a 118ft/ 36m shadow vessel, currently under construction in Asia. Carrying the same DNA as her bigger “beauty queen” sister, the shadow vessel is the hard working sibling. Both she and the onboard Owner’s limousine tender will have Cor D. Rover styling and a patented Van Oossanen Fast Displacement Hull, but her “make-up” will be a no-filler-matt-finish (albeit in the same color scheme as her big show-off sister).

PHI is scheduled to be launched in 2021.