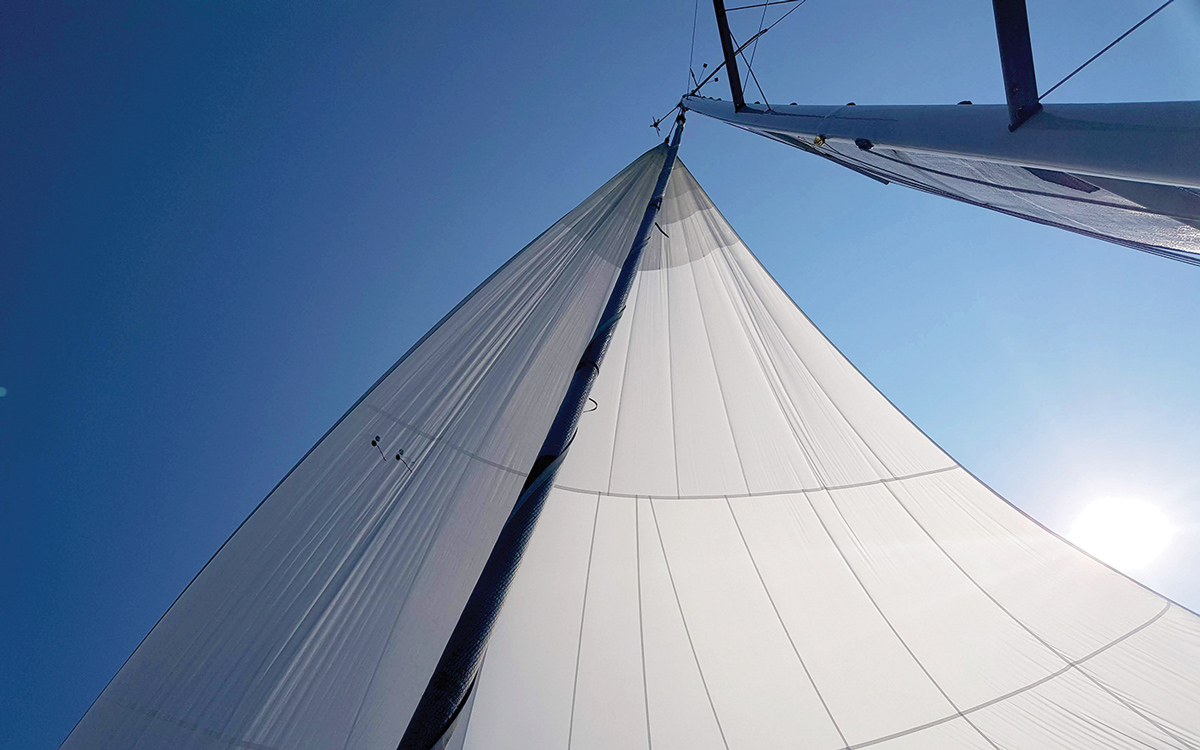 These can transform cruising yachts, giving them sufficient power to sail in light airs when previously crews would have been likely to resort to the engine. However, as we can see from our 2019 ARC survey report, for cruising yachts, asymmetric sails of any description have drawbacks for the dead downwind sailing that comprises most of a typical tradewind Atlantic crossing.

This is not a problem for Volvo 65s and IMOCA 60s that are so fast that the apparent wind is always well forward of the beam.

By contrast, cruisers of a similar size are likely to make their best downwind VMG at deep angles. North Sails’ Neil Mackley, who looks after clients including Nautor and Oyster, tells us the Oyster 575, has maximum VMG at true wind angles of 160-180°, especially when fully loaded with water, fuel, food and spares at the start of an ocean passage. 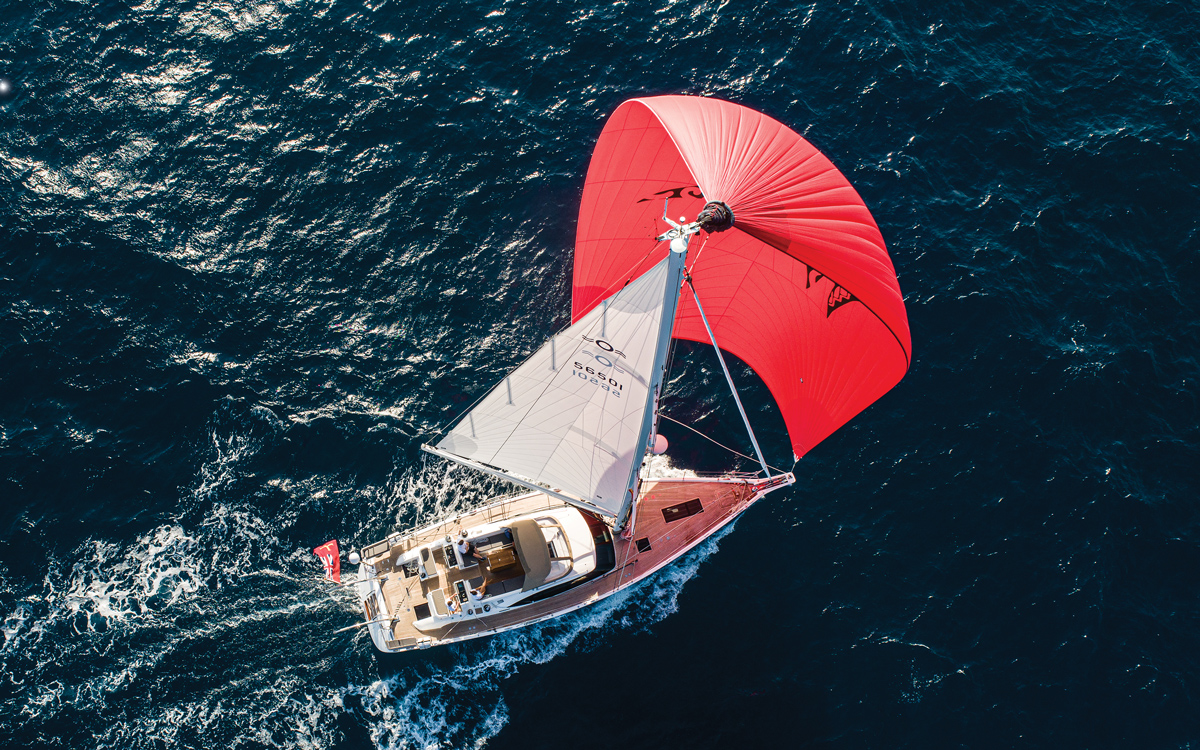 “What’s right for an Oyster 575 won’t be right for a Pogo 44, or a Baltic 148,” he says. “Start with the basics: ask yourself what true wind angle will you need to sail to achieve good downwind VMG? Then select the right sail for that angle.”

“That’s why a poled-out headsail, or a conventional spinnaker set using a pole, is very good on many cruising yachts,” he says.

When steering with a good pilot, in typical 15-knot tradewinds the maximum viable true wind angle for a modern asymmetric kite is 150° to 160°. In an awkward sea state the breeze will need to be brought even further forward, which necessitates gybing wider angles and may mean an uncomfortable quartering sea. 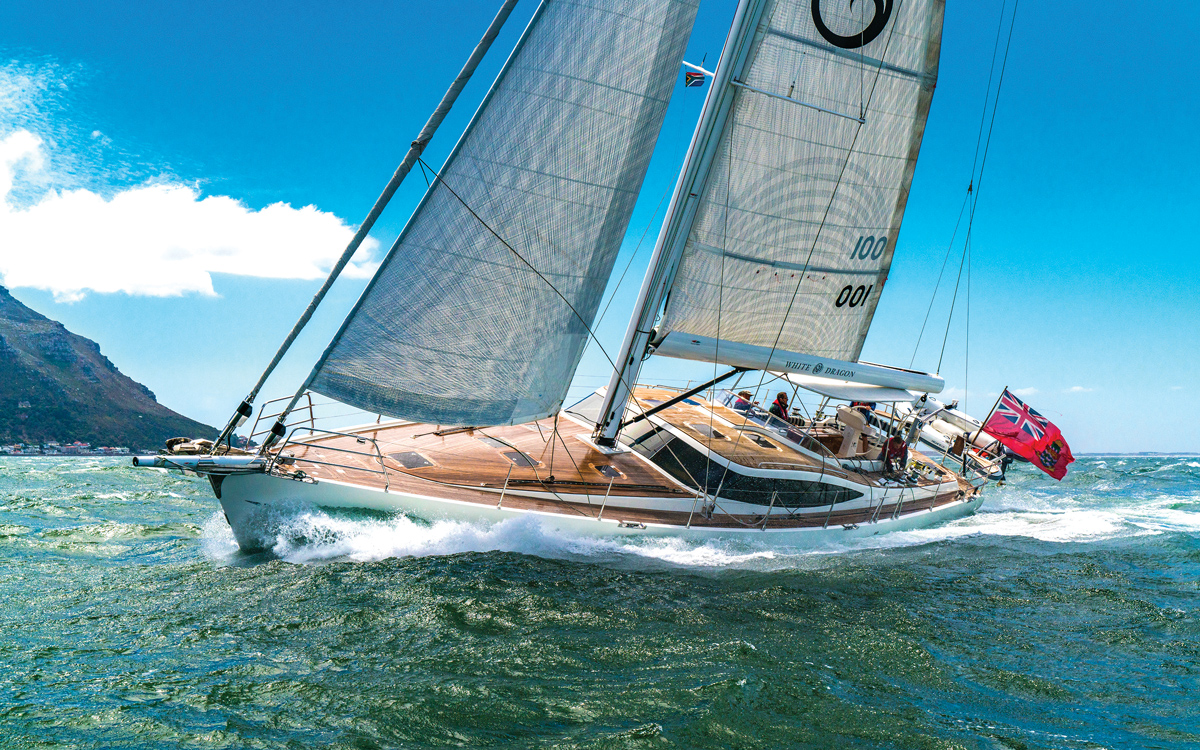 Even though this remains an expensive option, in-boom furling is one that a growing number of boat owners are adopting.… 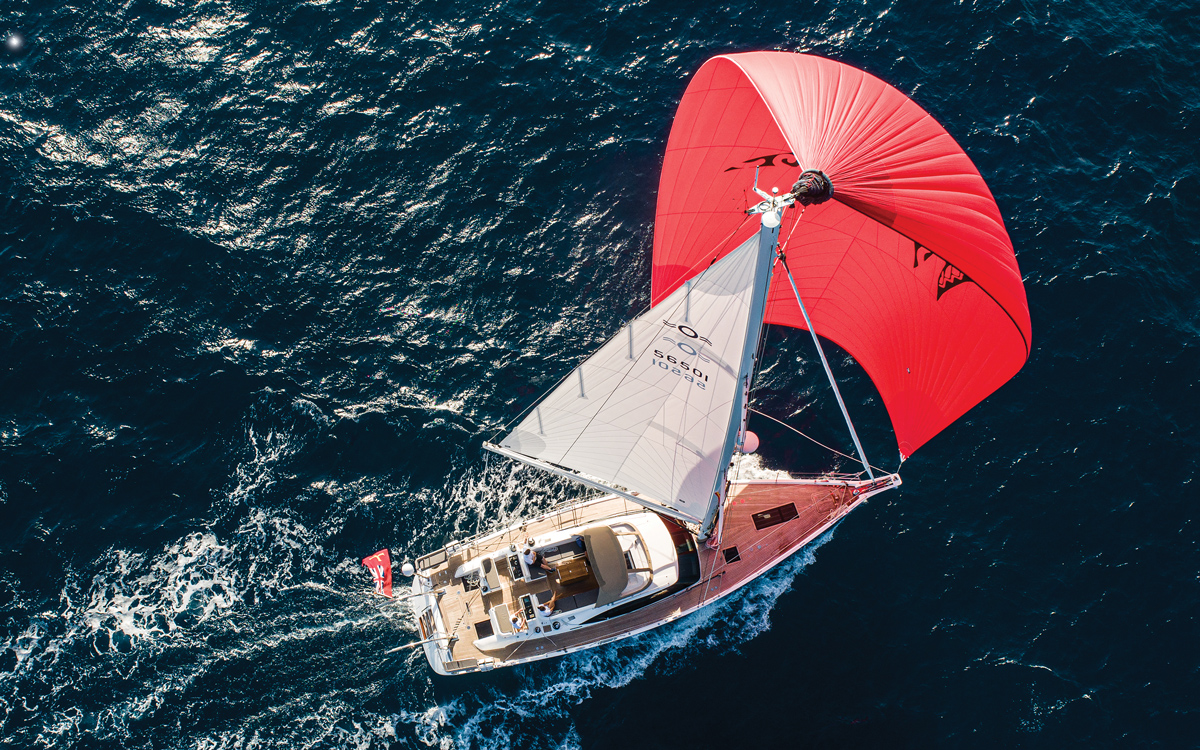 Tradewind sailing is hard to beat. Every yacht is different, however, and each skipper likes to sail their boat their…

“Once you’re in open water with plenty of space a conventional spinnaker is super effective on a boat like the Oyster 485,” Mackley adds.

In stronger breezes a poled-out headsail gives a bulletproof set up that also helps to stabilise the boat, giving it a more comfortable motion (the 2019 ARC skippers overwhelmingly favoured using poled-out headsails for downwind sailing).

The point of transition between spinnaker and poled-out headsail will vary between different boats and crews, but is usually in the 15-20 knot range. Those who exercise caution and change down early rarely lose much distance in cruising terms, but they still gain hugely from better speed and motion in lighter airs. 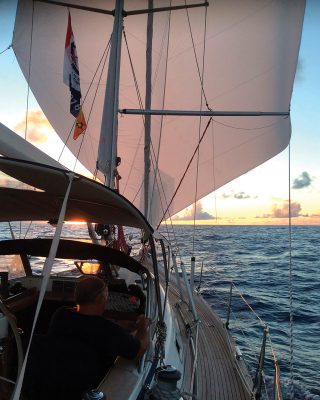 Twin headsails were traditionally used as an easy tradewind set up. A number of sailmakers, including Elvstrom and North, have developed a modern take on this arrangement that makes for very easy handling, without using the mainsail.

North’s solution, for instance, includes two headsails typically made of heavy-duty nylon. These share a single torsion cable, allowing them to be furled in the same manner as a Code 0. One can be set from the spinnaker pole, the other from the main boom.

This arrangement provides a lot more area than could be achieved with a pair of poled-out headsails, especially for a modern yacht with a relatively small non-overlapping jib. These sails can also be set independently of the regular headsail, typically from a short sprit.

For those who’d prefer to stay with an asymmetric option, OneSails’ Peter Kay says he’s been impressed with the way the company’s free flying FFR (Flat Furling Reacher) sets at deepish wind angles, even though it’s not optimal for this purpose. As with Code 0s, this sail is attached at the head and tack, and the luff is taught, so there’s much less that can go wrong and wraps are not a worry.

It might be possible to pole out a sail like this when running. Benefits of this over a spinnaker include retaining the ability to furl easily. However, if goosewinged the sail is unlikely to be stable without an excessively long pole, or being cut with a high-aspect shape that risks compromising its effectiveness when used in conventional fashion for broad reaching.

Very lightweight modern cruising yachts that plane easily will benefit from sailing angles downwind using asymmetric kites. However, even on these boats a furling system is not a hoist-it-and-leave-it panacea for easy handling. 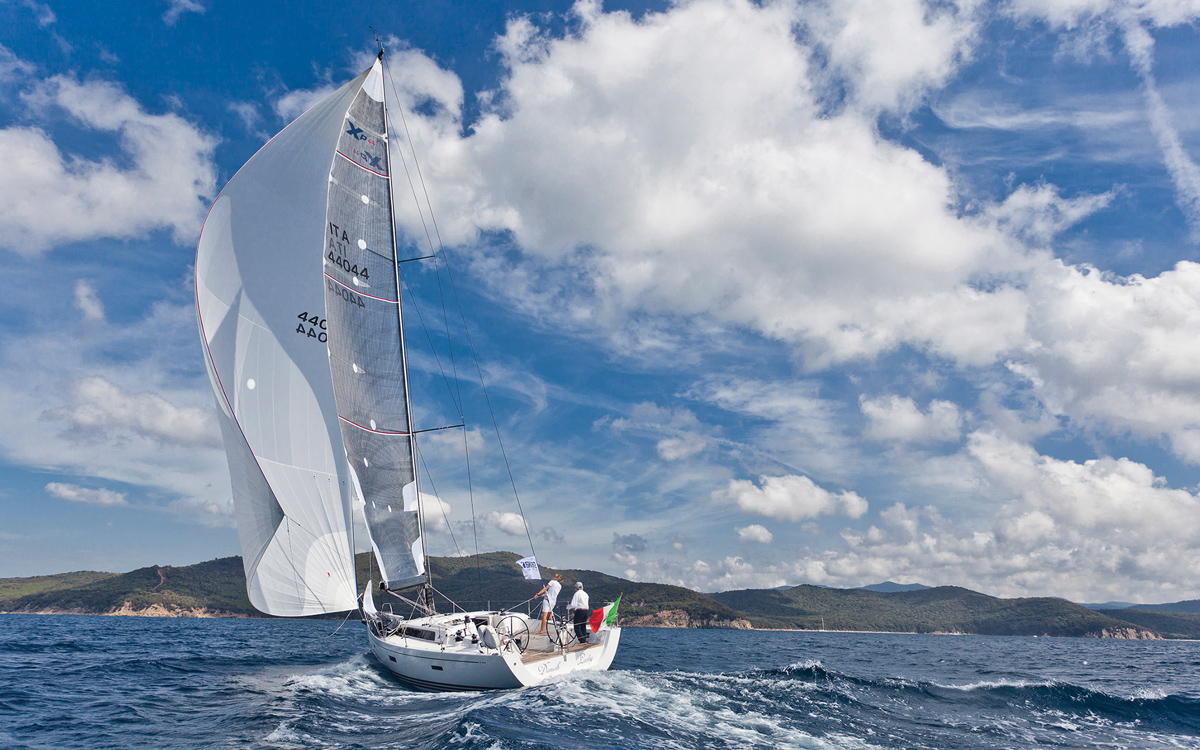 “A common misconception is that furling reaching and downwind sails can be left aloft for extended periods while furled,” says Kay. “I don’t think we should over promise on these systems – they are better seen as a convenient way to deploy the sail.”

The problem is that for cruising yachts these sails need a full shape. In turn that means, however neatly the sail is furled, there will always be folds and tucks in the cloth. A gust of wind can catch these, causing enough material to unfurl that it starts to flog, which progressively leads to more and more of the sail unravelling.

This is a very different situation to the furling sails of recent generation IMOCA 60s. These are so fast the apparent wind is always well forward of the beam, so their sails are super flat, which inherently makes secure furling a possibility. 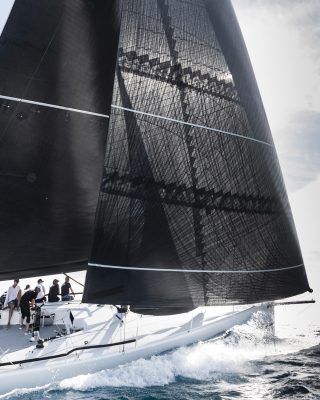 There are now three choices of luff type for asymmetric sails – a traditional heavy anti-torsion rope built into the luff of the sail, which is still commonly used for close-reaching sails.

In the cableless sails developed by Doyle Sails, this is replaced with a system of structural fibres spread through a lens shape at the luff of the sail. This can be a good choice for sails designed for a wider range of reaching angles.

Load-sharing is a combination of the two, with a relatively light anti-torsion cord, plus some load directed through structural fibres in the sail. North’s Helix is an example that has quickly become popular in the high-performance world.

Sails with an anti-torsion stay built into the luff tend to furl neatly and easily around the cable. Load-sharing sails like Helix have a lighter cord that helps with this, but they are not as good in this respect as a sail with a cable.

The choice of sail informs the choice of handling equipment and there have been considerable advances across the board in this area in the past few years. Snuffers were the original easy handling system for both downwind and reaching sails and are still a solution carried by over half the ARC fleet. Recent developments have created products that are far more refined, easier to use and easier to stow than old-school products.

For instance North Sails’ systems now have smaller and lighter buckets, control lines are within the sock, a breathable fabric is used, and a visual marking clearly indicates if the sock is twisted. The company also offers an air snuffer that can be deflated to pack neatly into a sail locker. This means carrying a dedicated downwind sail, in addition to a reaching sail, may not take up as much space as owners expect. 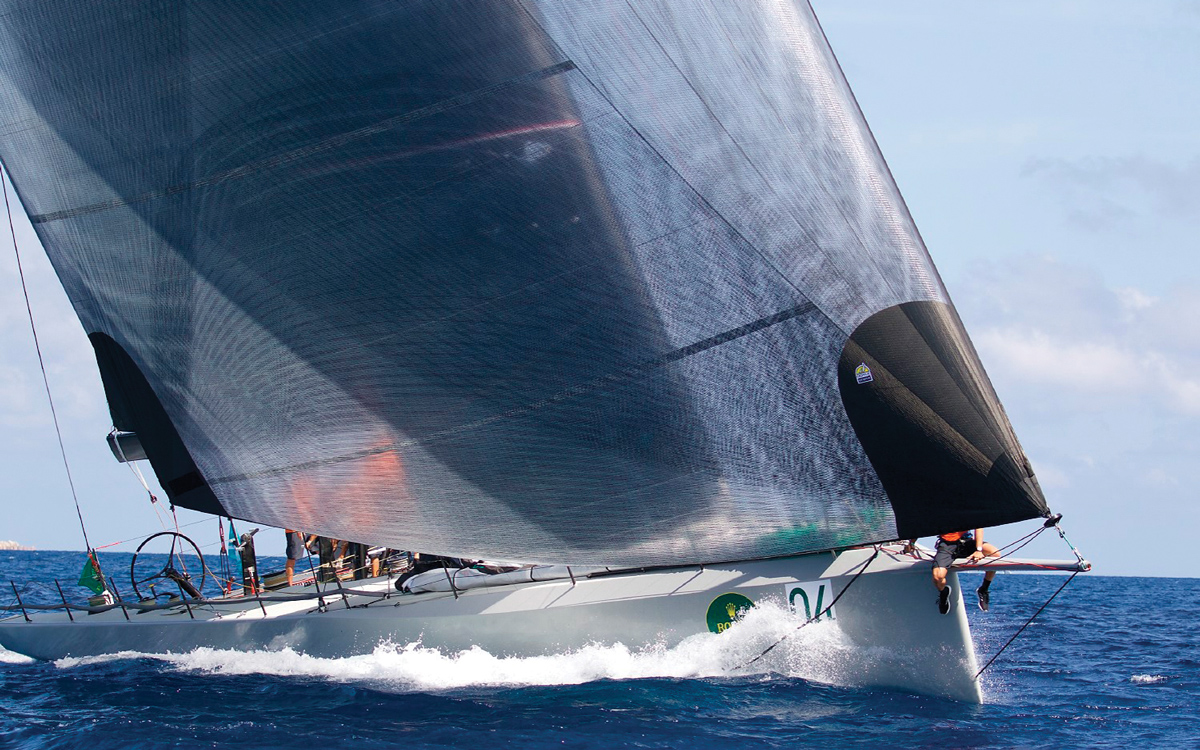 Bottom-up furlers were a revelation when they first became popular for use with early Code 0 reaching sails. However, in many applications they were replaced by top-down furlers, which are better at gathering in the leech, especially on a sail with a deeper cut designed for sailing at greater downwind angles.

Top-down systems operate by placing the tack on a swivel, allowing the torsion rope to spin independently of the tack of the sail. Therefore the head wraps around the cable first, followed progressively by the rest of the sail. This process is more effective at neatly gathering excess material in the leech than bottom-up systems.

With the advent of cableless and load-sharing sails the choice of furler type has become more varied. It’s something for discussion with the sailmaker, but top-down systems are usually the best option for sails with a traditional anti-torsion cable, while bottom-up furlers are generally better for a cableless or load-sharing sail.

First published in the August 2020 issue of Yachting World.