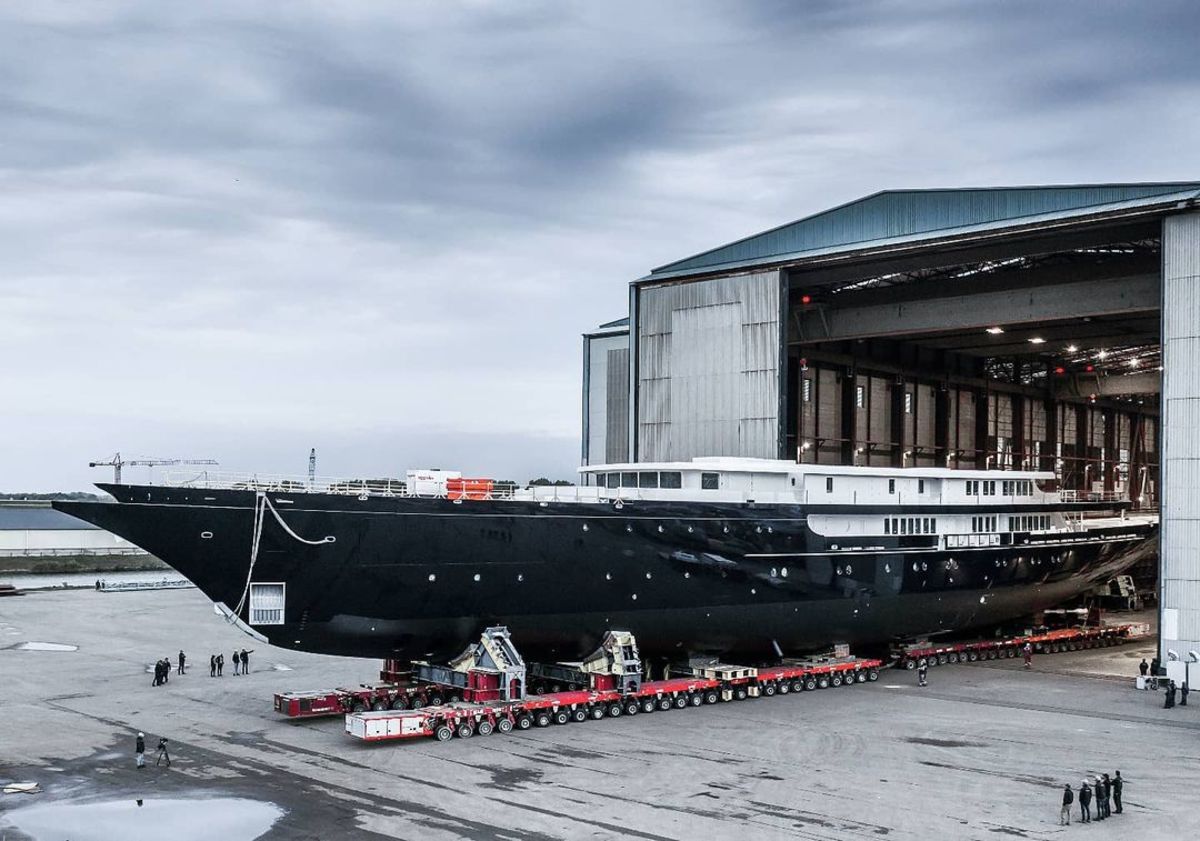 The name Jeff Bezos always creates a buzz and when it is rumored to be connected to a 417-foot/127-meter sailing yacht in build at Oceanco, all sorts of stories arise— such as the current controversy around the need to dismantle the De Hef bridge in Rotterdam to allow the yacht to pass.

Recently, there has been a lot of hype about De Hef bridge in Rotterdam having to temporarily come down to accommodate the 417-foot/127-meter sailing yacht, purportedly owned by Jeff Bezos, currently in build at Oceanco. Yachts International decided to check up on this story.

The Konigshaven bridge, colloquially known as De Hef bridge (which means to lift up) is an historical landmark in Rotterdam. Originally built in 1877 as a swing bridge to connect railroad traffic from the north with the south in the Netherlands, it was part of a long railroad bridge that went through the heart of Rotterdam. It was destroyed in 1918 when a German steamship ran into it. Then in 1927, it was reconstructed as a lift bridge. In World War II, it was damaged again but eventually fixed so that it could once again accommodate trains. In 1993, a 9,186-foot/ 2800 -meter tunnel under the Nieuwe Maas river replaced De Hef and other railroad bridges.

Obsolete as a railroad bridge, the Koningshaven Bridge underwent a major restoration in the years 2014-2017, during which time the renovation included the foresight and innovative engineering for the temporary removal of the horizontal span to provide local commerce with the ability to serve national and international clients that would otherwise not be possible. Today, De Hef has been locked in a continually upward position with an air draft of 154-feet/ 47 meters, which allows most ships to pass under it.

Why is this De Hef bridge important? The municipality sees the bridge as important for aesthetic, historical and economic benefit of the wider community. Rotterdam is a region world renowned for its commercial shipbuilding and leisure yacht building. Multiple maritime companies such as Oceanco, IHC, and Hollandia are vested in and around Rotterdam. Many of the yachts and ships built in the area need to go under this bridge at some time or another.

Prior to committing to building the 417-foot/127-meter sailing yacht, or any other large vessel, Oceanco and indeed all companies in the Dutch Maritime Cluster keep an ongoing dialogue with the municipality to determine equitable solutions to accommodate the movement of the cluster’s vessels and to ensure that any possible dismantling of the bridge will be covered by the company in question.

It would appear that maintaining thriving maritime community— including the building an extraordinary project such as a complex 417-foot/127-meter sailing yacht—would outweigh any temporary upset involved around the temporary dismantling of the horizontal part the bridge. It is planned for the central piece of the bridge to be removed for a single day and then replaced exactly as it was found. There will be no long-term impact or modifications to the De Hef bridge.

With a custom yacht project as large and innovative as the new Oceanco yacht, that are not many places in world where the work could be completed. From an economic perspective, the wider Rotterdam community is supportive of such builds because these projects are so valuable both in terms of local employment and for the prestige that they bring to the region and The Netherlands as a whole. Prior to the new 417-foot /127-meter, Oceanco launched two other sailing yachts during the bridge’s renovation period. The new sailing yacht will have masts that exceed the height of the De Hef bridge.