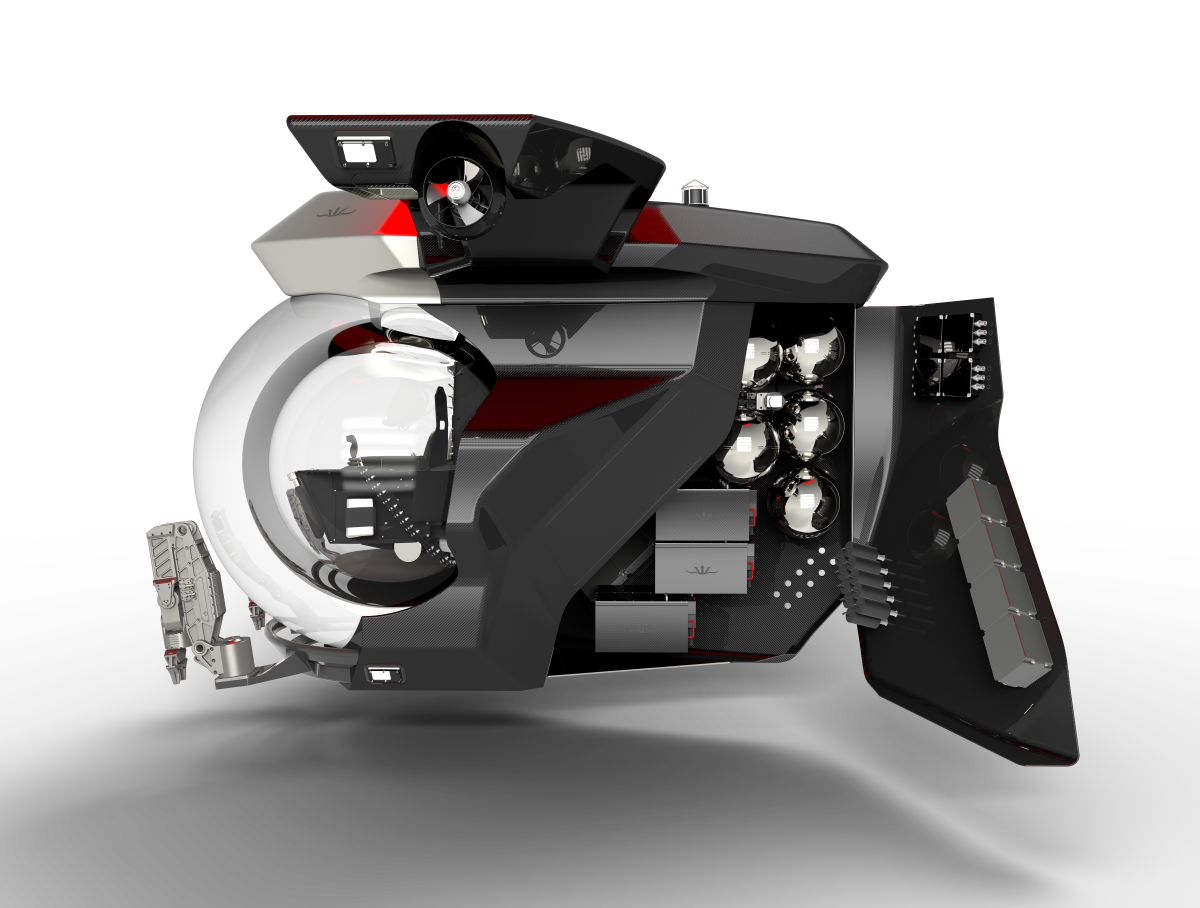 NAMED IN HONOR OF HISTORIC 2019 MISSION TO THE RMS TITANIC, the T IS A HIGH-PERFORMANCE, FLEXIBLE PLATFORM BUILT SPECIFICALLY TO ACCOMMODATE PROFESSIONAL APPLICATIONS AND FEATURES THE LARGEST AND THICKEST ACRYLIC SPHERE EVER PRODUCED.

Triton Submarines LLC, a manufacturer of personal submarines designed for yacht, hospitality and cruise ship deployment, has unveiled the design for the newest model— the Triton 13000/2 Titanic Explorer (TE). Set to be the deepest diving acrylic pressure-hulled manned submersible ever produced, it has the ability to dive to 13,123ft (4,000m) and features Gull Wings.

When retracted, the submersible is streamlined for ascent and decent, capable of maneuvering in and around incredibly tight spaces. Fully deployed to 19ft 8 in (6m), the gull wings raise the vehicle’s propulsion up and away from the seabed, ensuring that delicate species or free-floating objects remain undisturbed. Cameras placed at the wing tips allow for a perfect external vantage point from which to film the submersible and its occupants; ideal for presenter-led productions. Theenormous 500 kg payload capacity allows for almost a half-ton of additional mission-specific equipment to be integrated.

Principal Design Engineer John Ramsay says, “When we started thinking about the design of the Triton Titanic Explorer, we knew the unique visual capability of being the deepest diving acrylic hulled sub would need to be countered by the darkness at depth. What’s the point of going down if you can’t see anything when you get there? So, we developed the Gull Wings to counter just that. They are equipped with lighting and cameras so you can essentially light your subject from one angle while shooting from the other, and even adjust the position of the wings for dexterity, control and maneuverability. It’s a remarkable advancement, particularly for filmmakers, researchers or scientists who are using the vehicle.”

During ascent and decent, the submersible’s Silent Glide feature can be enabled, which allows gentle, sweeping turns perfect for cinematic camera work or following, but not disturbing, marine life on the move. Without using thrusters, Triton Titanic Explorer can maintain a fixed heading, track an object, or glide towards a target in descent. Conversely, when engaged, the thrusters provide additional controls to counteract the strong currents that can be experienced around fragile marine habitats and wrecks.

The Triton Titanic Explorer is named in honor of Triton’s August 2019 mission to visit the RMS Titanic utilizing the Triton 36000/2. It was the first manned mission to visit the wreck in 14-years and utilized a series of dives to assess the condition of the Titanic using augmented reality and visual reality technology for the very first time. Never resting on their laurels, the Triton team took what they learned on that mission to advance the technology of this newest model even further.

“We have a proven track record of developing the safest and most reliable submersibles on the market, but we are always challenging ourselves to figure out what’s next, says Triton Co-Founder and President Patrick Lahey We’ve found it’s not just about going down in a submersible, it’s about the user experience and the things we can do once underwater.”