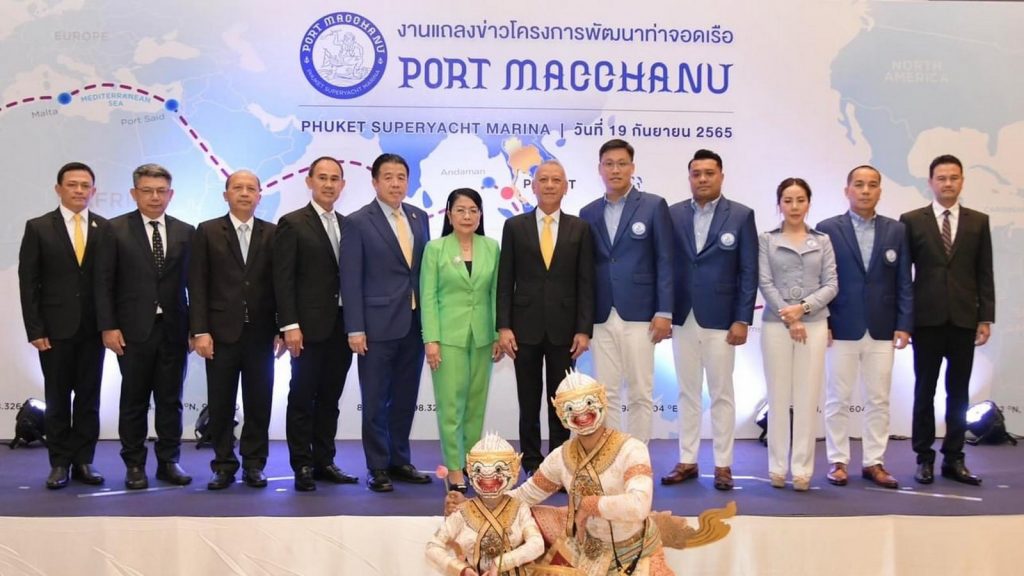 The Thai Yachting Business Association (TYBA) has announced the launch of a new superyacht marina, which is to be located on Phuket’s northeast shore, about two kilometres west from Phuket Yacht Haven marina.

Dubbed “Port Macchanu”, the project is to further develop Phuket’s role as a superyacht hub in Thailand and Southeast Asia. The TYBA noted that the project’s affect on the economy was “in accordance with the policies of the government and the Ministry of Tourism and Sports.”

On September 19, 2022, Thailand’s Minister of Tourism and Sports, Phiphat Ratchakitprakarn, presided over a press conference in Bangkok to announce the launch of the Port Macchanu Superyacht marina development project. Also in attendance were officials from the Ministry of Tourism and Sports and the Department of Tourism. TYBA President Ditapong Thitadilok will be executive director of the project.

The TYBA announcement said that the marina would be located in an area with suitable depth and natural protection. Port Macchanu will provide 40 berths for superyachts up to 50 metres, with onshore facilities for crew, plus restaurants, a supermarket and a convention hall. The TYBA said the marina will be adjacent to the Phuket Premier Boatyard, which can service yachts up to 80 feet, and a new shipyard which will be able to service yachts up to 60 metres.

Thailand has struggled to adapt its tourism industry in the wake of Covid travel restrictions, which decimated the tourism industry. The government has tried to encourage high end and luxury travel in response. In early 2021, the Thailand Finance Ministry announced a change in charter rules that would allow foreign-flagged superyachts to charter their vessels without having to pay VAT on the import value of the yacht. Superyacht industry insiders said the change would boost superyacht visits to Phuket.

In the past year, marinas at or near Phuket have announced expansion plans of their own. Port Takoka, located along Phang Nga Bay in Krabi province, announced an expansion of 300 berths for yachts up to 45 metres. Royal Phuket Marina announced a dredging project to allow yachts up to 35 metres round-the-clock access to its man-made harbour.