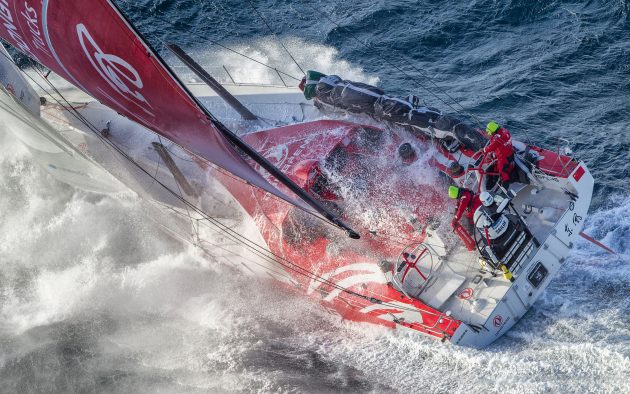 Pro sailor and veteran of numerous round the world and ocean races, Stu Bannatyne, talks Andy Rice through the best ways to tackle survival conditions

Stu Bannatyne has learned the hard way that sailing upwind in survival conditions changes your priorities. “A lot of the decisions are based around boat preservation, rather than outright speed. The old axiom: ‘to finish first, first you must finish’ comes into play in survival conditions.”

This was brought home to him early in his Whitbread/Volvo Ocean Race career in 1993 when Bannatyne was racing on the 85ft Maxi ketch New Zealand Endeavour. “We were sailing upwind and hit heavy airs and big seas from Uruguay up to Fort Lauderdale.

“We suffered some delamination of the hull and core shear, and as a 22-year-old nipper it was amazing to see the more experienced guys use whatever we had on board to fix it. You need to have contingency plans in mind but it’s better not to get the damage in the first place.”

An even starker example was in the 2008/09 Volvo Ocean Race when faced with a particularly stormy Strait of Luzon near the Philippines. “Never before had I been on a boat when we actually stopped and waited to assess the conditions. It was 50 to 55 knots of wind and big seas and Puma broke a boom even with three reefs in the main.”

With survival and boat preservation in mind, here are Bannatyne’s five tips for slogging upwind in severe conditions. 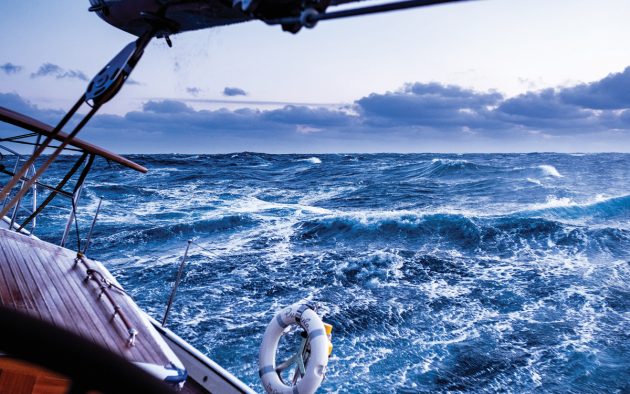 Sailing upwind in the furious fifties east of Argentina, looking out aft from the port quarter. Photo: Pepo Subiranas

Stronger winds often bring bigger, stormy seas. This can be daunting and you need to think about safety, not necessarily having people sitting on the rail.

Conditions may get so severe that you’re no longer looking for outright speed.

Launching off big waves is not a very smart way to go about keeping your boat together and maintaining a high average speed. 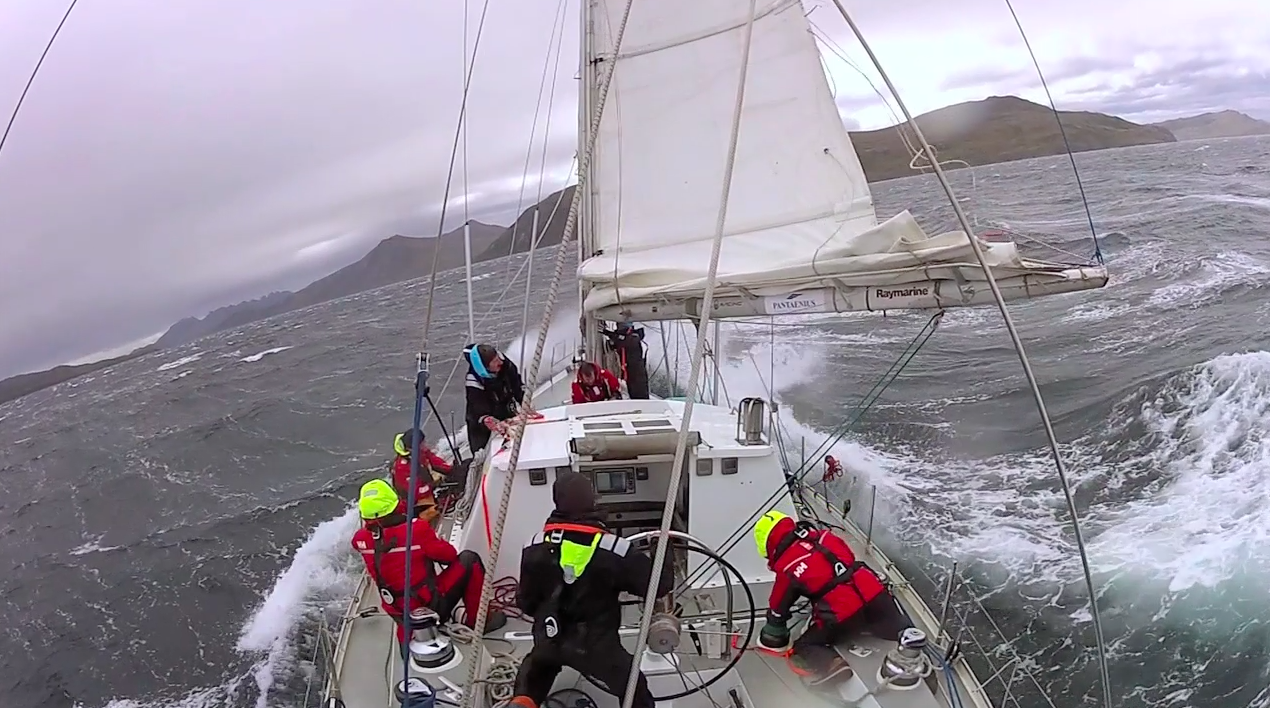 Skip Novak has firm views about the easiest and safest way to reduce sail and carry on in a gale.… 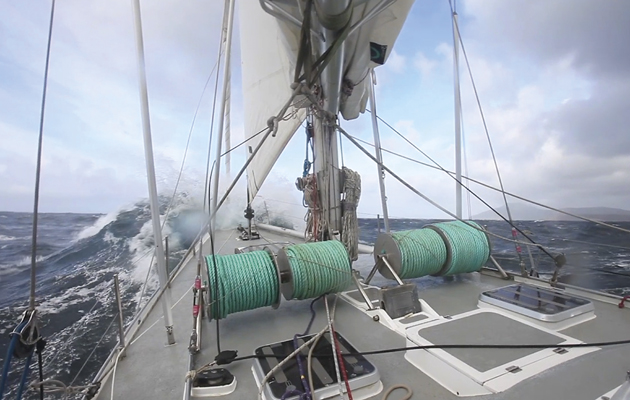 Heaving to is an ideal technique for riding out a storm, but there’s an art to it in heavy seas.…

You should be reducing the sail area and reducing the righting moment correspondingly to the increasing severity of the conditions. Having a decent amount of heel to get through the waves is important to stop the boat slamming.

Aim to reduce righting moment by getting crew off the rail and down below to lie on the leeward bunks.

For a 600-mile race, depending on the number of crew, I’d run a three-watch system.

When the conditions are nice, it’s good to have two of those watches on deck and sailing the boat. You get the extra weight on the rail, you get the extra people for rotating trimmers and so on. But in rougher conditions you can rest two watches at a time.

In survival conditions it’s better to keep people rested rather than tiring them out on the rail. Make sure you have plenty of plain food that requires minimal preparation, and make sure everyone is well dressed and keep them warm with hot drinks. 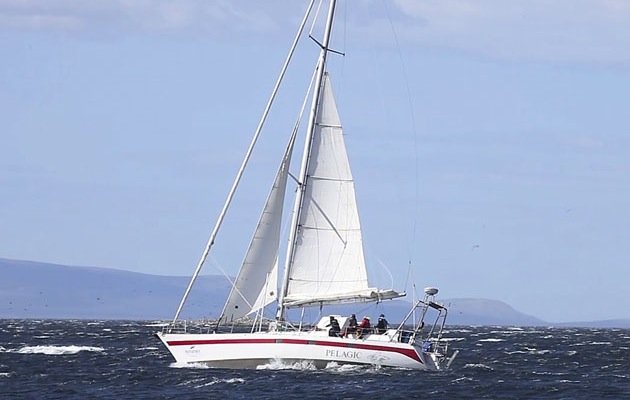 Watch the forecast like a hawk for any changes, particularly a potential worsening of conditions.

If you suspect the wind and wave state is set to keep on building, it’s always a good idea to change down your headsails first, before you think about putting a reef in the mainsail.

It’s much easier to do a headsail change in 20-25 knots of wind compared to 30 knots or more.

So you would change all the way down to a J4 on most boats while still carrying full mainsail. Only then would you reef the main, and you might put in a second reef before you change down again to a storm jib or a J5.

By the time it’s getting to 40 knots-plus, then you’d put in a third reef into the mainsail.

If you’re going to be reefed for a long time, make sure you roll up the foot of the mainsail with bungees or ties, and roll it in the right direction so that the waves don’t fill up the roll in the sail.

As the sea state builds it can become very difficult to steer the boat, so it’s important to try and maintain a balance.

Test different sail combinations for maintaining a good helm balance on a training day when the wind and sea state aren’t so severe, so you know what selections to make when you find yourself racing in tough conditions.

A well-balanced boat shouldn’t require too much steering for anything other than the really big waves. As a general rule, don’t steer around waves too much because that will change the apparent wind angle quite a bit.

So you’ve got to find the right balance for the sea state. The aim is to set the boat up with a more forgiving trim mode.

It’s common for strong winds not to line up with the wave train, particularly when you get a frontal passage coming through. If you can get on to the tack that takes you across the waves, rather than directly into them, to get to where you want to go or towards flatter water (eg in the lee of a land mass) then use the less violent wave angle to your advantage.

As time passes after the frontal passage, the wave train will align more with the wind direction. So any time you can spend on the favoured tack for the difficult sea state means that when you do tack, it’s likely you’ll be sailing at a more favourable angle to the waves than if you’d made the tack sooner.