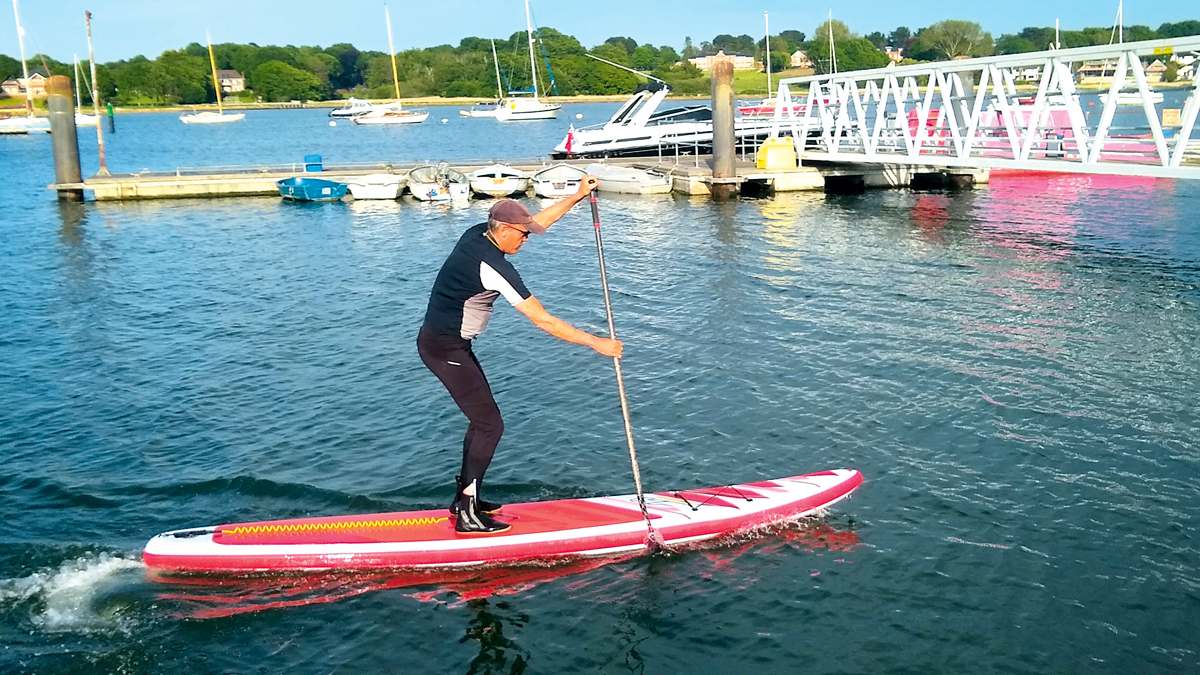 Jake Frith finds out if the Bestway Hydro Force Fast Blast SUP, one of the cheapest 12ft 6in inflatable stand up paddleboards available on eBay, is more than just a beach toy…

I recently wanted to try an inflatable stand up paddleboard (SUP) for use as a tender to get to my boat when she’s out on the mooring.

I’ve done this before with my ‘hard’ SUP boards, but they can’t carry much, it’s an exposed mooring and it only works on a flat calm day. Plus if a hard board touches a hard boat, there’s the risk of damage.

Also my son is eight now and, while children’s SUPs are available, they’re a big investment for something I fear he could quickly lose interest in and he really wants to come out on my board with me.

We tried both of us once on a 14ft foam and carbon raceboard, and I can report that it’s impossible to put a combined weight of 120kg on a 23in-wide platform that’s designed for 90kg max.

We borrowed a 12ft6 dropstitch inflatable SUP on holiday last year and blasted around the bay at Fishguard very effectively so, in the winter, I had a look for a second-hand one.

There were a few on the usual sites but they were all in the low £200s price wise and all 10ft or smaller. Checking on eBay how much a new one was, I found this Bestway Hydro Force Fast Blast SUP for £240 delivered just before Christmas with a bag, pump, paddle and leash.

At 12ft 6in long by 30in wide and with over 300lt of buoyancy it should provide stability for two, and I figured that if I didn’t get on with it I could just sell it in the summer for very near what I’d paid for it.

Looking again now, prices for the Bestway Hydro Force Fast Blast SUP have risen to around £260, but it’s still a bargain compared to the prestige named brands that can come in at six times the price. 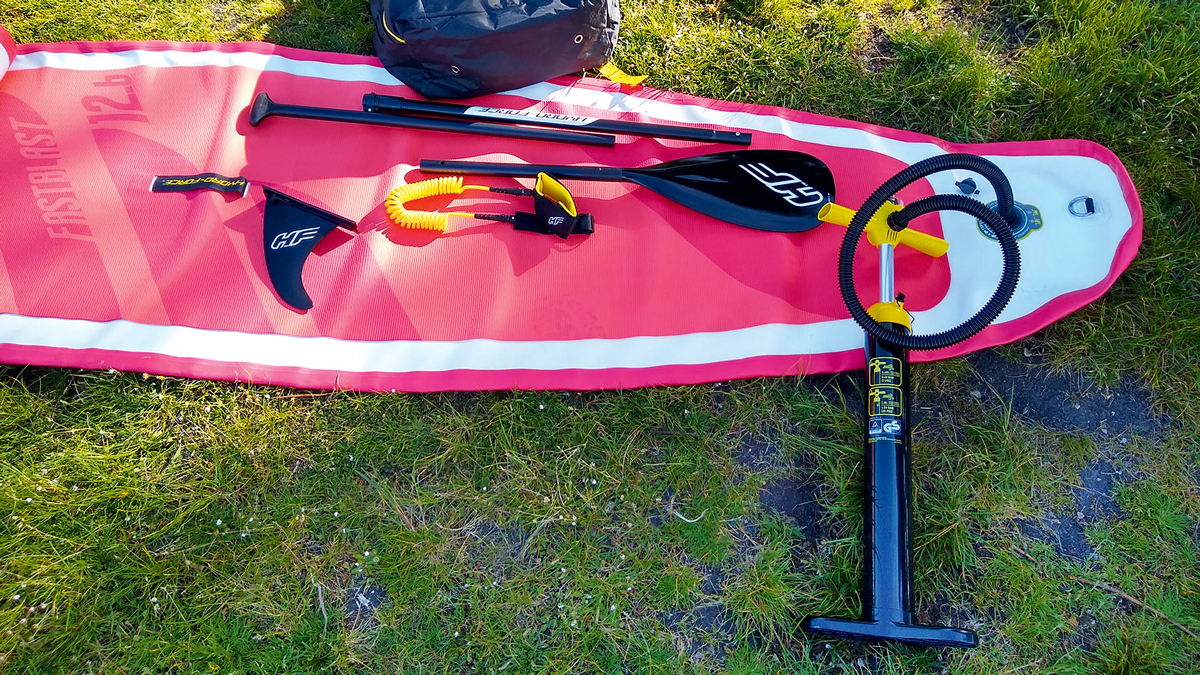 The full set includes a bag, leash, an OK pump and a terrible paddle

The quality of manufacture looks surprisingly good with all seams well attached and nothing poorly glued or lifting anywhere. It’s also a 15psi max. pressure board which gets a big tick.

Obviously it’s not going to be as stiff or well made (or expensive!) as an 18psi or 20psi board, but some cheap boards come with a max. rating of 12psi or 13psi, so it’s not bottom of the pile.

It professes on the box to be three-layer dropstitch. Some brands have been caught out in the past selling single layer dropstitch boards as multi layer, but as I’m not inclined to attack it with a Stanley knife to find out we’ll give them the benefit of the doubt.

The pump arrived showing 4psi on its gauge with the needle levitating above its stop, but the rucksack looks great and has a very useful compression strap inside to keep the board tightly rolled. 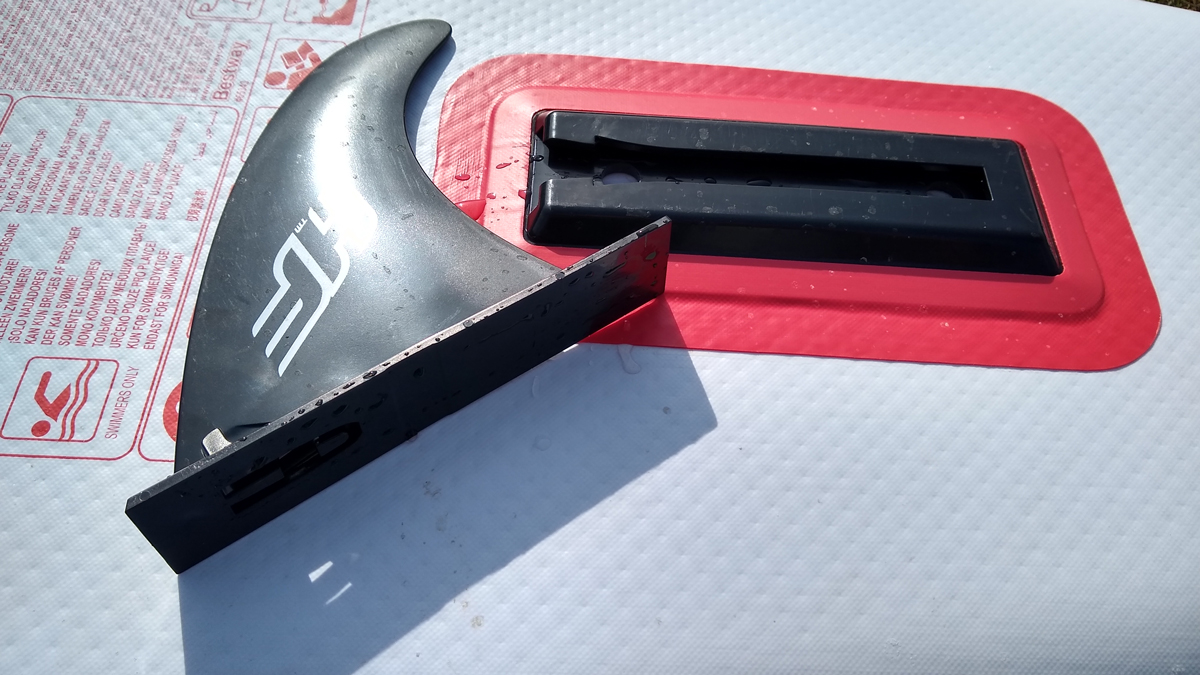 A small fin and near impossible to upgrade

Three piece aluminium paddles that come with cheap SUPs are universally awful, and this one is no exception. Heavy at well over 1kg and with a blade so flexible I could bend the end of it an inch just with my thumb and forefinger.

Budget £100 for a decent lightweight adjustable second-hand fibreglass- or carbon-shafted SUP paddle – it will transform the experience, and when you change boards just keep your nice paddle.

Why it’s worthing paying for a 12ft 6in paddleboard

The most common budget inflatable SUPs are around the 10ft mark. As SUPs, unless surfing on waves, are displacement craft (unless you can produce about 3hp to get it planing!), the waterline length rule applies when it comes to their top speed.

Half a knot when you have less than five knots to play with is massively significant, especially if you’re using it somewhere where there might be 2.5 knots of tide running against you.

Extra length also tends to make boards track better and less paddle switching from side to side improves momentum, provides a straighter track and therefore also improves speed made good.

The ​​Bestway Hydro Force Fast Blast SUP seemed to want to go nine or 10 paddle strokes each side on average and I’ve paddled shorter inflatable SUPs that are nearer four or five strokes per side so it’s pretty good on that.

That is fortunate because the fin is small and as Bestway uses a clip-in finbox of Far East origin rather than the industry standard US box, it will be very hard to get a bigger fin for it. 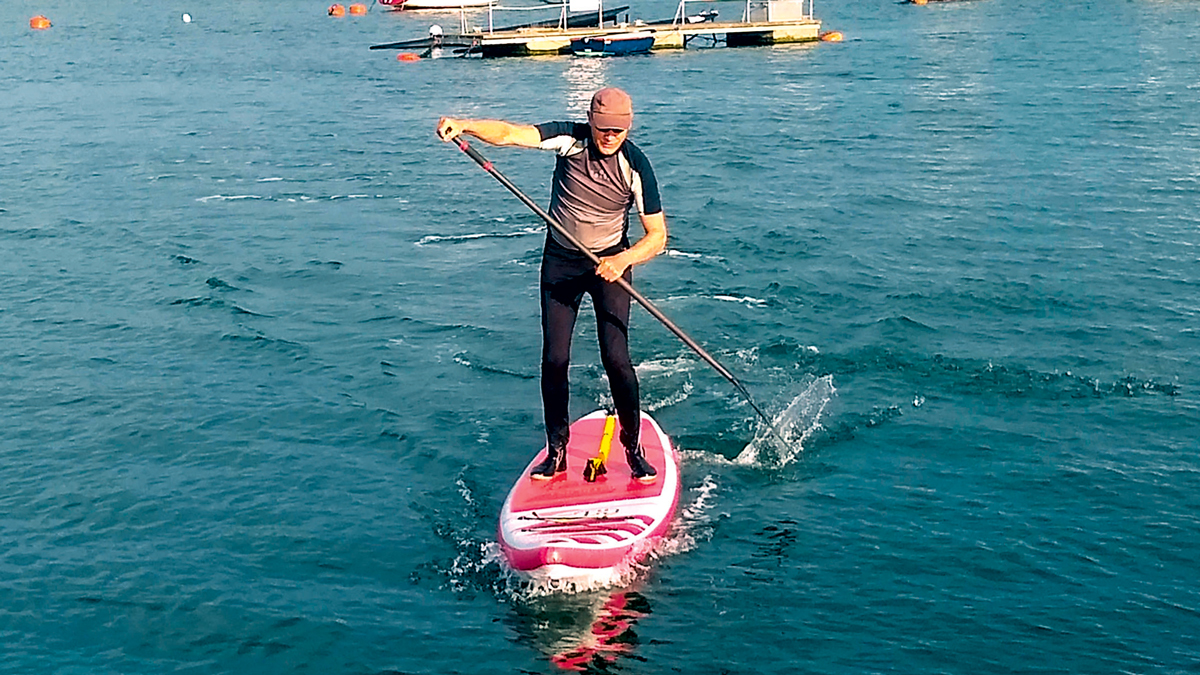 A choppy test for the Bestway SUP

First test of the Bestway Hydro Force Fast Blast SUP was with an indicated max pressure of 15psi out on Southampton Water with about a foot and a half of chop.

The board is rated as suitable for up to 120kg, and my 85kg left it pretty floaty, unstable and somewhat at the mercy of the wind.  This is an issue with thicker boards, and this one is made from the thickest 6in dropstitch.

Board flex was also pretty bad, with the (indicated) 15psi I had in it, so much so I could see the bow flopping up by a foot or so to meet me as I battled upwind through the chop. As this was also my first test with the Bestway paddle, I quickly turned tail and headed back in only narrowly averting a swim.

This is why having a paddleboard pump gauge you can trust is such a critical thing. Was it flexing due to the design, or was it due to underinflation? Dare I put another 4psi in it? 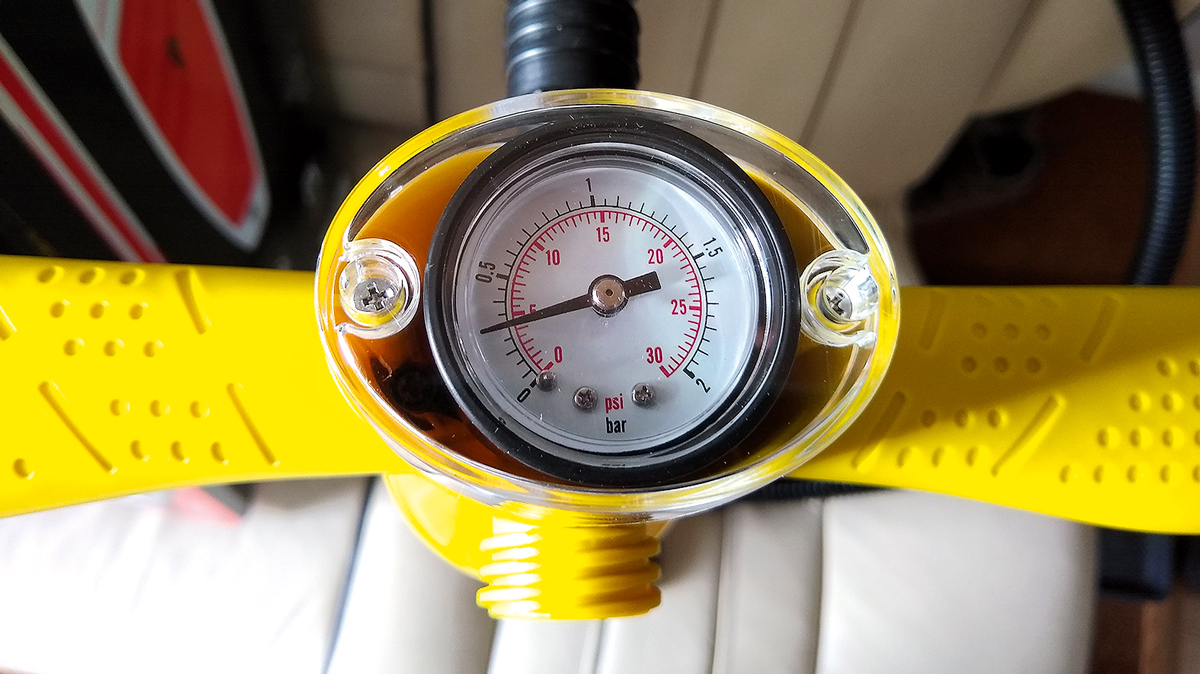 The pump gauge told lies straight out of the box

In the end I decided to head for the river Hamble instead. Daniel and myself weigh pretty much bang on the Bestway Hydro Force Fast Blast’s 120kg max recommended payload, and the greater ballast made the board much more stable. It also tracked better with both of us and, believe it or not, felt no slower through the water.

In conclusion, the board itself is happiest when well-weighted, ideally near to its 120kg max. The Bestway Hydro Force Fast Blast SUP gets along nicely enough for what it is and will do the intended job for me as a two person fun craft and for occasional yacht tender duties, but don’t get it if you’re a lightweight and definitely budget for a half decent paddle.

Note: We may earn a commission when you buy through links on our site, at no extra cost to you. This doesn’t affect our editorial independence.