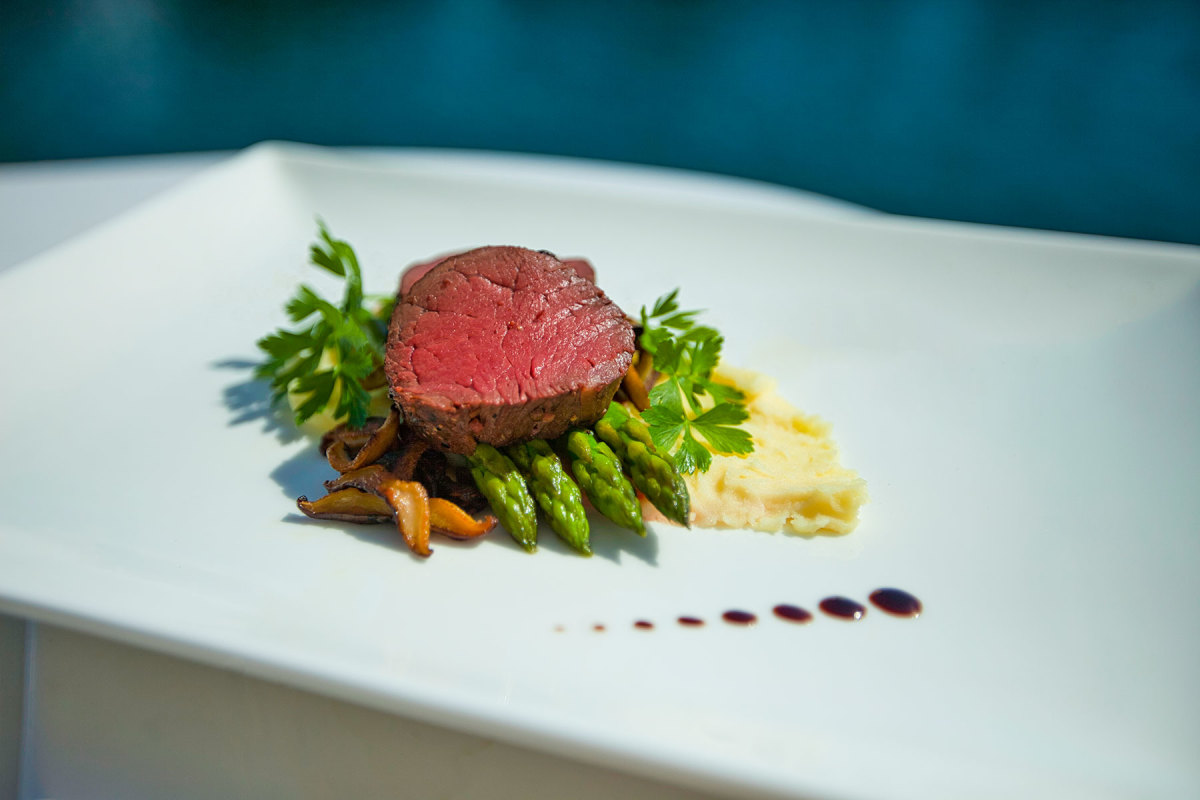 Every summer from 2013 to 2016, chef Elizabeth Lee would host charter clients aboard an 85-foot gulet that she owned with Capt. Warren East. The couple would cruise the islands of Turkey and Greece, where Lee befriended not only people her own age, but also their mothers and grandmothers. Occasionally, Lee would go to the families’ homes to cook with them. Sometimes, the grandmothers would come aboard to demonstrate their favorite dishes.

One grandmother who visited the gulet, Lee recalls, “was so old and cute. She must have been 4½ feet tall. The whole day, I probably learned about 30 dishes.”

Lentil rissole was among those dishes. It’s made with lentils, bulgur and a chef’s choice of flavorings.

“She taught me the technique where you cook the lentils and then add the bulgur in, to steam itself,” Lee says. “Then you can make vegetable burgers or little packets that they put inside lettuce, so you can eat it like a lettuce wrap.”

Today, that technique and Lee’s take on the flavorings are detailed in Made With Love, a cookbook that she and East wrote, photographed and designed based on their experiences sailing around the world together since 2006. The cookbook incorporates personal stories from their voyages, and showcases Hahn Family Wines, a vineyard in Monterey County, California, whose sommelier offers pairings for each dish.

The editor of Made With Love is Lee’s mother, Virginia Lee, who just published her own 28th cookbook.

“They sell at all the gift shops all over Canada,” Lee says. “You wouldn’t believe the kitchen equipment that is harbored at my mom’s house. My father just reaps the benefits of being the taster. I used to sit on the stool in the kitchen, and my mom would be testing the recipes.”

Growing up in that environment, Lee says, nurtured her love for cooking. She studied culinary arts at the University of British Columbia’s Okanagan campus, where she focused on French cuisine.

“There was a French teacher, a German teacher and Swiss teacher,” Lee says. “I went more to the French side of techniques, probably because the base of most cuisine comes from France. I wanted to learn from the beginning, the primary sauces, all of that.”

By 2003, Lee was working as a sous chef at a ski resort’s Italian restaurant in Whistler, British Columbia. Her sister was sailing in the British Virgin Islands and invited her to do a delivery aboard the 80-foot Alden Lelanta from Tortola up the U.S. East Coast to New York.

“The minute I got on that boat, I was sold,” she says. “The captain of Lelanta called a few months later and said he was going to a new boat, Eliza, an 80-foot Ocean. I became the chef, and that began my career in yachting.”

Three years later, Lee went to work aboard the 73-foot Yapluka catamaran Wonderful, met East and fell in love. From there, they moved to the 95-foot Blue Bay catamaran Black Swan. In 2011, they moved aboard the gulet that they had bought for themselves. They gutted it with the help of Turkish carpenters and established it as the charter yacht Turkish Delight, with Lee winning the chefs’ competition at the Marmaris Charter Yacht Show on the Turkish Riviera.

It’s a place where, historically, local men had served as chefs aboard charter yachts.

“They hated us,” Lee recalls. “They’d just glare at us after I won the chefs’ competition.”

Charter brokers, however, loved Lee and East, and Turkish Delight built a strong charter program in the region. The couple married and likely would have continued to charter there if not for the Syrian crisis that left the local waters dotted with life jackets and other debris that fleeing refugees left behind. The world-famous photo of 3-year-old Syrian boy Alan Kurdi, his limp body washed up on a beach, was taken so close to the gulet that Lee could see the police and the child through the boat’s binoculars.

“It was a very difficult time, seeing all of that poverty,” she says. “All of our charters were canceled. Syria was so close to Turkey, and a lot of our clients were American, and they didn’t want to be near that.”

The couple raised about $12,000 to try and help the refugees, but eventually, they felt they had to escape the situation, too. Lee and East changed the gulet’s name to Lady Elizabeth and moved her to Greece, then Croatia, but ultimately had to stop chartering because of government crackdowns on boats from Turkey flooding the markets.

Today, they are aboard the Australian-built, 92-foot Sabre Catamaran Pegasus, where they charter with repeat clients during April, May and June in the Bahamas. Downtime during the Covid-19 pandemic gave Lee the chance to complete the cookbook she’d been putting together in her mind for all those years prior.

The cover photo is of the butter-poached lobster tail that judges honored with first prize at the Sint Maarten Charter Yacht Exhibition. Lee starts that preparation with a beurre monté and then emulsifies lemon into the butter, which she then uses to poach the lobster. “You’ll have a nice, light acidity as well as the perfect balance of saltiness and the lusciousness of butter,” she says.

Another of her favorite recipes in Made With Love is sous vide filet mignon. She provides the recipe along with instructions for a traditional preparation as well as the sous vide technique.

“That way, if anyone doesn’t know sous vide, they can become really comfortable with cooking the dish the traditional way, and then they can advance and cook it with sous vide,” she says.

Made With Love is available at Hahn Family Wines tasting rooms and at Lee’s website, cookbookmadewithlove.com. She plans to start posting short videos this year, showcasing techniques from the book. Her goal is to share all the knowledge she has acquired from people like that Turkish grandmother who taught her what to do with lentils and bulgur.

“Everywhere we’d go, I’d try to learn from chefs,” she says. “I’d go to restaurants to watch them cook. I did it in Italy, in France, in Greece, anywhere. A chef in the Caribbean from one of the big cruise ships taught me how to make bread. If you just ask, people love to teach you what they know.”