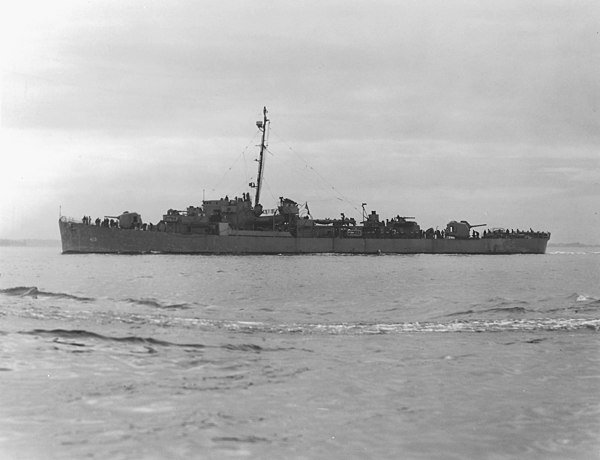 Explorers have located the long-sought remains of a US navy destroyer, which is claimed to be the deepest shipwreck ever discovered.

The USS Samuel B Roberts, known as the “Sammy B”, was sunk during the largest sea battle of the second world war against a superior Japanese fleet.

On June 24, retired naval officer and underwater explorer Victor Vescovo revealed he and a team from his undersea technology company Caladan Oceanic had located the destroyer escort ship more than four miles beneath the surface in the Philippine Sea. It was identified  broken into two pieces on a slope at a depth of 6,985m.

Another video from the survey dive on the Sammy B. This one is from the starboard side near the bridge and forward gun mounts. We kept our distance because we spotted potentially live shells in the 40mm gun, and later towards the stern, depth charges still in their racks. pic.twitter.com/DY54o6Prpx

That puts it 427 metres deeper than the USS Johnston, the previous deepest wreck discovered last year in the Philippine Sea, also by Vescovo. He announced the latest find together with UK-based Eyos Expeditions.

In a statement, Vescovo said, “With sonar specialist Jeremie Morizet, I piloted the submersible Limiting Factor to the wreck of the Samuel B. Roberts (DE 413). Resting at 6,895 metres, it is now the deepest shipwreck ever located and surveyed. It was indeed the ‘destroyer escort that fought like a battleship.’

“It was an extraordinary honour to locate this incredibly famous ship, and by doing so have the chance to retell her story of heroism and duty to those who may not know of the ship and her crew’s sacrifice.”

With sonar specialist Jeremie Morizet, I piloted the submersible Limiting Factor to the wreck of the Samuel B. Roberts (DE 413). Resting at 6,895 meters, it is now the deepest shipwreck ever located and surveyed. It was indeed the “destroyer escort that fought like a battleship.” pic.twitter.com/VjNVERdTxh

USS Samuel B. Roberts was the first ship named for Coxswain Samuel Booker Roberts, Jr., who was killed in the Battle of Guadalcanal. Commissioned on April 28, 1944, the destroyer escort was lost that same year during the Battle off Samar when it, along with several other US warships, engaged Japanese forces off the Philippine coast, to protect US invasion forces in Leyte Gulf. The Japanese had invaded Leyte invaded earlier in the war, as part of the liberation of the Philippines.

The US Navy destroyer escort USS Samuel B. Roberts in 1944

“USS Samuel B. Roberts was lost in one of the most valiant actions in the history of the US Navy,” says Naval History and Heritage Command Director Samuel Cox, a retired rear admiral. “The gallantry of her crew serves to inspire US Navy personnel today, knowing they are entrusted with upholding the legacy and example of this ship and crew.”

The wreck is now considered a protected site.

“The site of the wreck marks the location of a hallowed war grave,” Cox adds. “It serves to remind all Americans of the great cost born by previous generations for the freedom we should not take for granted today.”